Knowledge Representation (KR) is traditionally based on the logic of facts, expressed in boolean logic. However, facts about an agent can also be seen as a set of accomplished tasks by the agent. This paper proposes a new approach to KR: the notion of task logical KR based on Computability Logic. This notion allows the user to represent both accomplished tasks and accomplishable tasks by the agent. This notion allows us to build sophisticated KRs about many interesting agents, which have not been supported by previous logical languages. 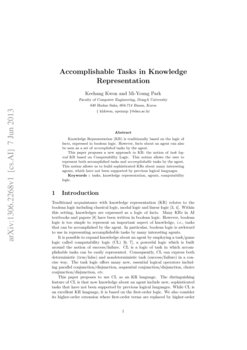 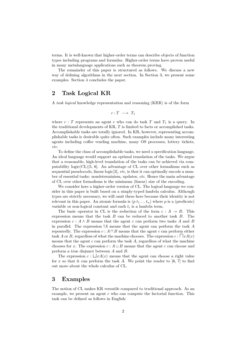 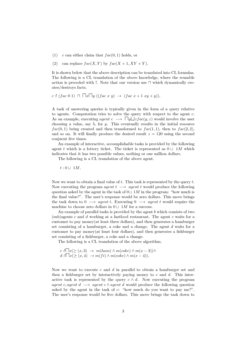 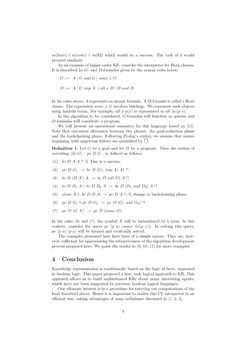 Traditional acquaintance with knowledge representation (KR) relates to the boolean logic including classical logic, modal logic and linear logic [3, 4]. Within this setting, knowledges are expressed as a logic of facts. Many KRs in AI textbooks and papers [8] have been written in boolean logic. However, boolean logic is too simple to represent an important aspect of knowledge, i.e., tasks that can be accomplished by the agent. In particular, boolean logic is awkward to use in representing accomplishable tasks by many interesting agents.

This paper proposes to use CL as an KR language. The distinguishing feature of CL is that now knowledge about an agent include new, sophisticated tasks that have not been supported by previous logical languages. While CL is an excellent KR language, it is based on the first-order logic. We also consider its higher-order extension where first-order terms are replaced by higher-order terms. It is well-known that higher-order terms can describe objects of function types including programs and formulas. Higher-order terms have proven useful in many metalanguage applications such as theorem proving.

The remainder of this paper is structured as follows. We discuss a new way of defining algorithms in the next section. In Section 3, we present some examples. Section 4 concludes the paper.

where c:T represents an agent c who can do task T and T1 is a query. In the traditional developments of KR, T is limited to facts or accomplished tasks. Accomplishable tasks are totally ignored. In KR, however, representing accomplishable tasks is desirable quite often. Such examples include many interesting agents including coffee vending machine, many OS processes, lottery tickets, etc.

To define the class of accomplishable tasks, we need a specification language. An ideal language would support an optimal translation of the tasks. We argue that a reasonable, high-level translation of the tasks can be achieved via computability logic(CL)[5, 6]. An advantage of CL over other formalisms such as sequential pseudocode, linear logic[3], etc, is that it can optimally encode a number of essential tasks: nondeterminism, updates, etc. Hence the main advantage of CL over other formalisms is the minimum (linear) size of the encoding.

We consider here a higher-order version of CL. The logical language we consider in this paper is built based on a simply-typed lambda calculus. Although types are strictly necessary, we will omit these here because their identity is not relevant in this paper. An atomic formula is (p t1…tn) where p is a (predicate) variable or non-logical constant and each ti is a lambda term.

The expression c:\Large⊔xA(x) means that the agent can choose a right value for x so that it can perform the task A. We point the reader to [6, 7] to find out more about the whole calculus of CL.

The notion of CL makes KR versatile compared to traditional approach. As an example, we present an agent c who can compute the factorial function. This task can be defined as follows in English:

It is shown below that the above description can be translated into CL formulas. The following is a CL translation of the above knowledge, where the reusable action is preceded with !. Note that our version use ⊓ which dynamically creates/destroys facts. c:! (fac 0 1) ⊓ \Large⊓x\Large⊓y ((fac x y) → (fac x+1 xy+y)). A task of answering queries is typically given in the form of a query relative to agents. Computation tries to solve the query with respect to the agent c. As an example, executing agent c ⟶ \Large⊓y\Large⊔zfac(y,z) would involve the user choosing a value, say 5, for y. This eventually results in the initial resource fac(0,1) being created and then transformed to fac(1,1), then to fac(2,2), and so on. It will finally produce the desired result z=120 using the second conjucnt five times.

An example of interactive, accomplishable tasks is provided by the following agent t which is a lottery ticket. The ticket is represented as 0⊔ 1M which indicates that it has two possible values, nothing or one million dollars.

The following is a CL translation of the above agent.

Now we want to obtain a final value of t. This task is represented by the query t. Now executing the program agent t ⟶ agent t would produce the following question asked by the agent in the task of 0⊔ 1M in the program: “how much is the final value?”. The user’s response would be zero dollars. This move brings the task down to 0 ⟶ agent t. Executing 0 ⟶ agent t would require the machine to choose zero dollars in 0⊔ 1M for a success.

The following is a CL translation of the above algorithm.

Now we want to execute c and d in parallel to obtain a hamburger set and then a fishburger set by interactively paying money to c and d. This interactive task is represented by the query c∧d. Now executing the program agent c,agent d ⟶ agent c∧agent d would produce the following question asked by the agent in the task of c: “how much do you want to pay me?”. The user’s response would be five dollars. This move brings the task down to m(ham)∧m(coke)∧m($2) which would be a success. The task of d would proceed similarly.

As an example of higher-order KR, consider the interpreter for Horn clauses. It is described by G- and D-formulas given by the syntax rules below: G::= A|G and G|some x G D::= A|G imp A |all x D|D and D In the rules above, A represents an atomic formula. A D-formula is called a Horn clause. The expression some x G involves bindings. We represent such objects using lambda terms. For example, all x p(x) is represented as all λx(p x).

We will present an operational semantics for this language based on [11]. Note that execution alternates between two phases: the goal-reduction phase and the backchaining phase. Following Prolog’s syntax, we assume that names beginning with uppercase letters are quantified by ⊓.

Definition 1.  Let G be a goal and let D be a program. Then the notion of executing ⟨D,G⟩ – pv D G – is defined as follows:

The examples presented here have been of a simple nature. They are, however, sufficient for appreciating the attractiveness of the algorithm development process proposed here. We point the reader to [9, 10, 11] for more examples.

Knowledge representation is traditionally based on the logic of facts, expressed in boolean logic. This paper proposed a new, task logical approach to KR. This approach allows us to build sophisticated KRs about many interesting agents, which have not been supported by previous boolean logical languages.

Our ultimate interest is in a procedure for carrying out computations of the kind described above. Hence it is important to realize this CL interpreter in an efficient way, taking advantages of some techniques discussed in [1, 2, 4].

This paper was supported by Dong-A University Research Fund.