Physics-Informed Neural Networks (PINNs) can be regarded as general-purpose PDE solvers, but it might be slow to train PINNs on particular problems, and there is no theoretical guarantee of corresponding error bounds. In this manuscript, we propose a variant called Prior Dictionary based Physics-Informed Neural Networks (PD-PINNs). Equipped with task-dependent dictionaries, PD-PINNs enjoy enhanced representation power on the tasks, which helps to capture features provided by dictionaries so that the proposed neural networks can achieve faster convergence in the process of training. In various numerical simulations, compared with existing PINN methods, combining prior dictionaries can significantly enhance convergence speed. In terms of theory, we obtain the error bounds applicable to PINNs and PD-PINNs for solving elliptic partial differential equations of second order. It is proved that under certain mild conditions, the prediction error made by neural networks can be bounded by expected loss of PDEs and boundary conditions. 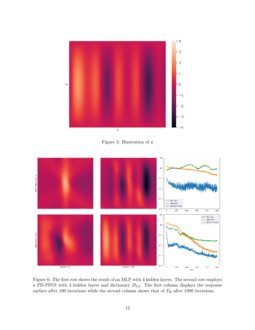 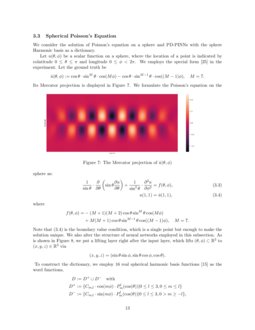 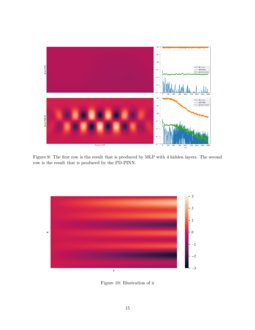 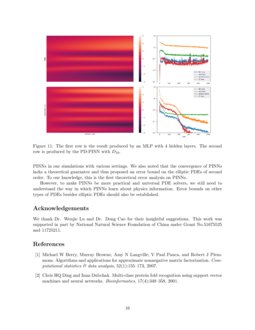 As is known, neural networks are widely used to solve various scientific computing problems [10, 2, 23]. A sequence of recent works has applied neural networks to solve PDEs successfully [12, 19, 13]. We consider the following partial differential equation for the function u(⋅):

the solution of which can be approximated by a neural network. Based on this motivation, Physics-Informed Neural Networks (PINNs) [20] construct such neural networks penalized by the discrepancy between the right-hand side (RHS) and the left-hand side (LHS) of problem (1.1

Denote a PINN as F being parameterized by Θ. When there is no ambiguity, we regard IC as BC. Then expected total loss during training consists of two parts:

The expected PDE loss is

Ω. The expected BC loss is

where random variable X is uniformly distributed on ∂Ω. The optimization problem of training FΘ is reformulated as follows:

[7] uses local adaptive activation functions. From the perspective of data-driven, the idea of leveraging prior structured information is also widely applied to training acceleration, such as wavelet representation[26], periodic structures[18], symplectic structures[21]

[11]. These methods employs specially designed neural networks and are applicable to a particular class of problems.

Motivated by these works, in this manuscript we introduce Prior Dictionary based Physics-Informed Neural Networks (PD-PINNs), which integrate prior information into PINNs to accelerate training. As is shown in Figure 2, compared with a PINN, a PD-PINN has an additional dictionary fusion layer, which combines prior information with the output layer of the neural network by the inner product. See section 2.1 for detailed description.

The idea of PD-PINNs is mainly motivated by two aspects. On the one hand, our method is derived from the traditional spectral methods[6, 5], which decompose the ground truth over an orthogonal basis. The methods enjoy the guarantee of spectral convergence, and these basis functions can be regarded as a special type of prior dictionaries. Nevertheless, a finite basis expansion would result in truncation error. PD-PINNs utilize the universal approximation ability of neural networks to make up the truncation error, which can achieve high accuracy with a prior dictionary consisting of a small amount of basis functions. On the other hand, since the essence of training neural networks is to learn representation, we could embed priors into the network before training stages. Therefore, one natural way is to construct a prior dictionary based PINN to achieve the “pre-train”, thus to accelerate training.

Another issue of PINNs is the suspicious error bounds. There is no guarantee that small PDE loss and BC loss in (1.5) lead to a small total loss. To partially address this problem, we propose an error bound for PINNs solving elliptic PDEs of second order in the sense of ∥⋅∥∞ under some mild conditions.

The main contribution of this manuscript is twofold.

The rest of the manuscript is organized as follows. Section 2 introduces the method and provides the theoretical error bound of PINNs on elliptic PDE of second order. Four numerical simulations on synthetic problems are conducted in section 3. Section 4 concludes this manuscript.

We first provide construction details of PD-PINNs in subection 2.1. Then we provide theoretical guarantees for PINN error bounds in section 2.2.

Let NΘ(⋅) be a neural network parameterized by Θ, which is a mapping from Rd into RN

. We employ a Multi-Layer Perceptron (MLP) with the activation function

Then the parameter collection is Θ:={W1,b1,W2,b2,⋯,WD,bD}. NΘ is the trainable part in our networks. Besides the part, we define the prior dictionary D:Rd→RN

as a vector-valued function, i.e.,

where fi:Rd→R,i=1,2,⋯,N are called word functions of dictionary D. Thus prior information is encoded in these word functions. Combining the trainable part and the given prior, we formulate a PD-PINN as

the structure of which has several advantages:

We can construct a dictionary based on the following considerations:

In this subsection, we provide an error bound on the discrepancy between a trained Fθ and the ground truth under mild assumptions. Consider equation (1.1) with the second order operator:

We denote A(x):=[ai,j(x)]i,j∈Rd×d and b(x):=[bi(x)]i∈Rd. If ζTA(x)ζ≥λ(x)∥ζ∥2 holds for some function λ(x)>0 on Ω, we say L is strictly elliptic on Ω. In the following theorem, for simplicity, we suppose that λ0>0 is a uniformly lower bound of λ(x), ∥b(x)∥∞ is upper bounded, and c(x)≤0 over ¯Ω, where ¯Ω represents the closure of Ω. Please refer to [4] for explicit explanation of the symbols used in this subsection.

Suppose that Ω⊂Rd is a bounded domain, L is strictly elliptic and ~u∈C0(¯Ω)∩C2(Ω) is a solution to (1.1). If the neural network FΘ satisfies that

then the error of FΘ(⋅) over Ω is bounded by

where C is a positive constant depending on L and Ω.

where C is a positive constant depending only on supΩ{∥b(x)/λ(x)∥} and the diameter of Ω. It immediately follows that inequality (2.2) holds. ∎

For Poisson’s equations, the second order operator L degenerates into the Laplace operator Δ, where aij(x)=δij, bi(x)≡0 , c(x)≡0 and λ0=1. Thus we have the following corollary:

Suppose that Ω⊂Rd is a bounded domain, and the ground truth ~u∈C0(¯Ω)∩C2(Ω). If a neural network FΘ satisfies that

then the error of Fθ(⋅) over Ω is bounded by

We discuss the assumptions in Theorem 2.1 and Corollary 2.2.

In the following, we will measure the discrepancy via an expected loss function instead of sup(⋅) to derive the error bound. To achieve the goal, we choose a smooth dictionary and smooth activation functions such that FΘ∈C∞(¯Ω). Then we obtain that L[FΘ] is l0-Lipschitz continuous on ¯Ω for some constant l0>0. We additionally assume that q is also l0-Lipschitz continuous. Before we propose the final theorem, we construct a relationship between ∥⋅∥L1 and sup(⋅) in the following lemma:

Let Ω⊂Rd be a domain. Define the regularity of Ω as

According to the definition of l-Lipschitz continuity, we have

Suppose that Ω⊂Rd is a bounded domain, L is strictly elliptic and ~u∈C0(¯Ω)∩C2(Ω) is a solution to (1.1). If neural network FΘ satisfies that

then the error of FΘ(⋅) over Ω is bounded by

where C is a positive constant depending on L and Ω,

In Theorem 2.4, we have proved that when the tractable training loss decreases to 0 in the sense of expectation, the neural network FΘ approximates the ground truth.

Our implementation is heavily inspired by the framework DeepXDE111https://deepxde.readthedocs.io/. We also take the following standard technical settings in the numerical simulations:

All simulations in this section are conducted with PyTorch. The code to reproduce all the results is available online

First, we consider a one dimensional Poisson’s equation with the Dirichlet boundary condition on both ends. Though the 1d problem seems simpler than its higher dimension versions, it is actually hard for neural networks to learn. The value of FΘ at an interior point is decided by two paths which connect the interior point and the two boundary ends. A slightly large error on one of the paths will result in large error in predictions of interior values.

which is smooth and has two different frequency components combining with a linear term. Its graph is shown in Figure 3.

The corresponding 1d Poisson’s equation is formulated as follows:

We employ a frequency based dictionary D with 2k+1 word functions:

Take NPDE=100, and the boundary value condition at two ends is included in the loss function in each iteration. The results are shown in Figure 3.2. PINNs implemented by MLPs fail to find the ground truth, though the curvature shares some similar tendency with ^u. The failure might be caused by the propagation perturbation of boundary information. However, with dictionary D integrated, the PD-PINNs have the ability to represent higher frequency even at initial iterations, and this ability might allow FΘ to broadcast information via the frequency domain instantly instead of gradual transmission through the spatial domain.

The graph of ^u is shown in Figure 5.

We formulate the 2d Poisson’s equation as

We construct a dictionary Dk1,k2 via

Take NPDE=1000 and NBC=400. Setting k1=k2=5, we have 25 word functions in this dictionary. The result is shown in Figure 6. It is obvious that the PD-PINN outperforms the PINN on this problem.

We consider the solution of Poisson’s equation on a sphere and PD-PINNs with the sphere Harmonic basis as a dictionary.

Let u(θ,ϕ) be a scalar function on a sphere, where the location of a point is indicated by colatitude 0≤θ≤π and longitude 0≤ϕ<2π. We employs the special form[25] in the experiment. Let the ground truth be

Its Mercator projection is displayed in Figure 7.

We formulate the Poisson’s equation on the sphere as:

Note that (3.4) is the boundary value condition, which is a single point but enough to make the solution unique. We also alter the structure of neural networks employed in this subsection. As is shown in Figure 8, we put a lifting layer right after the input layer, which lifts (θ,ϕ)⊂R2 to (x,y,z)∈R3 via

To construct the dictionary, we employ 16 real spherical harmonic basis functions[15] as the word functions,

where Plm(⋅) are the associated Legendre polynomial functions and Cm,l are normalization constants. Set NPDE=200, and (3.4) is taken into account in each iteration. The results are shown in Figure 9. The PINN fails to recover ^u in 2000 iterations while the PD-PINN recovers the ground truth with the error below 0.001.

The last simulation is conducted on a parabolic equation. Define the ground truth

which is illustrated in Figure 10:

Though the input is two-dimensional, we could employ a dictionary only depends on one of the dimensions:

We employ D10 with 21 words involved. Take NPDE=1000 inside. Note that we regard the initial value condition (3.5) as a boundary value conditions and take NBC=300 . As is shown in Figure 11, the PD-PINN outperforms the PINN. As we have emphasized earlier in the manuscript, the loss curve drawn in the last subfigure suggests that the rapid vanishment of ˆLossBC and ˆLossPDE do not necessarily imply an equivalent decline of the prediction error.

In this manuscript, we have proposed a novel PINN structure, which combines PINNs with prior dictionaries. With proper adoption of word functions, we illustrated that PD-PINNs outperform PINNs in our simulations with various settings. We also noted that the convergence of PINNs lacks a theoretical guarantee and thus proposed an error bound on the elliptic PDEs of second order. To our knowledge, this is the first theoretical error analysis on PINNs.

However, to make PINNs be more practical and universal PDE solvers, we still need to understand the way in which PINNs learn about physics information. Error bounds on other types of PDEs besides elliptic PDEs should also be established.

We thank Dr. Wenjie Lu and Dr. Dong Cao for their insightful suggestions. This work was supported in part by National Natural Science Foundation of China under Grant No.51675525 and 11725211.