Recent technological advances have proliferated the available computing power, memory, and speed of modern Central Processing Units (CPUs), Graphics Processing Units (GPUs), and Field Programmable Gate Arrays (FPGAs). Consequently, the performance and complexity of Artificial Neural Networks (ANNs) is burgeoning. While GPU accelerated Deep Neural Networks (DNNs) currently offer state-of-the-art performance, they consume large amounts of power. Training such networks on CPUs is inefficient, as data throughput and parallel computation is limited. FPGAs are considered a suitable candidate for performance critical, low power systems, e.g. the Internet of Things (IOT) edge devices. Using the Xilinx SDAccel or Intel FPGA SDK for OpenCL development environment, networks described using the high-level OpenCL framework can be accelerated on heterogeneous platforms. Moreover, the resource utilization and power consumption of DNNs can be further enhanced by utilizing regularization techniques that binarize network weights. In this paper, we introduce, to the best of our knowledge, the first FPGA-accelerated stochastically binarized DNN implementations, and compare them to implementations accelerated using both GPUs and FPGAs. Our developed networks are trained and benchmarked using the popular MNIST and CIFAR-10 datasets, and achieve near state-of-the-art performance, while offering a >16-fold improvement in power consumption, compared to conventional GPU-accelerated networks. Both our FPGA-accelerated determinsitic and stochastic BNNs reduce inference times on MNIST and CIFAR-10 by >9.89x and >9.91x, respectively. 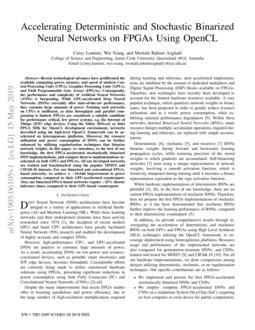 Development in the field of Single Board Computers (SBC) have been incre...
Sven Mantowsky, et al. ∙

Deep Neural Network (DNN) architectures have become integral to a variety of applications in Artificial Intelligence (AI) and Machine Learning (ML). While these learning networks and their underpinned elements have been actively researched since 1974

Despite the many improvements that recent FPGA studies offer in boosting parallelism and power efficiency, due to the large number of high-resolution multiplications required during learning and inference, such accelerated implementations are inhibited by the amount of dedicated multipliers and Digital Signal Processing (DSP) blocks available on FPGAs. Therefore, new techniques have recently been developed to account for the limited hardware resources available. A very popular technique, which quantizes network weights to binary states, has been proposed in order to greatly reduce resource utilization, and as a result, power consumption, while exhibiting minimal performance degradation [1]. Within these networks, denoted Binarized Neural Networks (BNNs), many resource-hungry multiply-accumulate operations, required during learning and inference, are replaced with simple accumulations.

Deterministic [2], stochastic [1], and recursive [8] BNNs binarize weights during forward and backwards learning propagation cycles, while retaining precision of the stored weights to which gradients are accumulated. Self-binarizing networks [8]

In addition, we provide comprehensive results through investigating the acceleration of deterministic and stochastic BNNs on both GPUs and FPGAs using High Level Synthesis (HLS) techniques utilizing the OpenCL framework, to encourage deployment using heterogeneous platforms. Resource usage and performance of the implemented networks are also compared for permutation-invariant DNNs, and CNNs, trained and tested for MNIST [5] and CIFAR-10 [3]. For all our hardware implementations, we draw comparisons among designs utilizing deterministic, stochastic, or no regularization techniques. Our specific contributions are as follows:

This section briefly reviews and presents the algorithms and methods used in our developed networks for the MNIST and CIFAR-10 classification benchmarks.

Binary weight regularization [1], constrains network weights to binary states of {+1, -1}, during forward and backward propagations. The binarization operation transforms the full-precision weights into binary values, using either a deterministic or a stochastic approach.

Deterministic binarization is defined in Equation (1).

where wb is the binarized weight and w is the real-valued full-precision weight.

is the hard sigmoid function described in Equation (

Algorithm (1) provides a high-level overview of the training algorithm used for deterministic and stochastic BNNs. Here, w, b, and η represent the weights, biases, and learning rate, while C denotes the cost function for each mini-batch. Furthermore, wb represents binary weights and ak represents the kth layer activation function, while binarize() implements Equation (1) or (2) depending the utilized regularization, and clip() clips values between −1 and +1. By adopting this training algorithm, during learning and inference, network outputs can be determined using simple Multiply and Accumulate (MAC) operations, in-place of dedicated multiplier blocks [2].

We implement two distinct neural network architectures: a permutation-invariant FC network for MNIST, and the VGG-16 [9] CNN for CIFAR-10. Details pertaining to each network are provided in a publicly available GitHub repository111https://github.com/coreylammie/Accelerating-Stochastically-Binarized-Neural-Networks-on-FPGAs-using-OpenCL.

To decrease the quantization error, which binarization introduces, the output of each layer is normalized using batch normalization. The output of the final layer is fed through a Softmax activation layer, and the network’s loss is minimized using cross-entropy. SGD with momentum is used to optimize the network parameters, with a initial learning rate,

η[0]=0.001, and momentum, m=0.9. In order to accelerate convergence, and maximize each networks’ performance, an adaptive decaying learning rate, η, is used, as described in Equation (4).

The developed hardware architectures consist of C++ host controllers and multiple OpenCL kernels, which are accelerated using either an FPGA or a GPU. For x86-based systems, OpenCL accelerated kernels using FPGAs typically reside on an FPGA development board, which is connected to a separate independent host system through the PCIe express interface [10]. For ARM-based systems, the FPGA is typically connected to a Hard Processor System (HPS) on a SoC through specialized bridges, as in the case of the Intel DE1-SoC development board that we used here. This allows the proposed networks to be run completely independently on the SoC without using a separate device for computation. The full top level flow diagram of our implemented FPGA-accelerated networks is presented in Figure (1).

In addition to accelerating the targeted MNIST and CIFAR-10 networks on a FPGA development board, each network is also accelerated on a state-of-the-art Titan V GPU to execute OpenCL kernels and an AMD Ryzen 2700X @ 4.10 GHz Overclocked (OC) CPU to drive the operating system.

In order to validate and investigate the performance of the proposed FPGA- and GPU-accelerated BNN architectures, the MNIST and CIFAR-10 datasets are used. To ensure a fair comparison, on account of the limited resource availability of the Intel DE1-SoC development board used, the batch size, I, was fixed to 4 for all networks. The validation accuracy for all developed networks over 200 training epochs is presented in Figures (2) and (3).

From Figures (2) and (3), it can be observed that both GPU- and FPGA-accelerated networks achieve very similar validation accuracy rates during learning. For all implementations, regularized networks require more training epochs to converge.

for FPGA post-synthesis, and NVIDIA-SMI for GPU. It was found that the power consumption of all FPGA-accelerated networks reduce by >16 times, compared to their GPU-accelerated counterparts.

Despite this drastic reduction in power consumption, our deterministic and stochastic regularized FPGA-accelerated networks require similar training durations to their GPU-accelerated counterparts, which have much higher operation frequencies, compared to our utilized FPGA. As reported in Table I, our FPGA-accelerated permutation-invariant FC stochastic and deterministic BNNs for MNIST require 1.10× and 1.41× longer training intervals, respectively. Our FPGA-accelerated CNNs adopting the VGG-16 architecture accelerate learning by 2.06× and 1.68×, respectively. These findings are in agreement with [2], which investigates execution times for FC and CNN BNNs, and demonstrates that convolutional operations are accelerated to a greater extent than matrix multiplications, which are required for FC layers.

When considering the inference time, all our FPGA-accelerated stochastic and deterministic regularized networks require shorter times to perform inference, compared to their GPU-accelerated counterparts. This is notable, considering our GPU-accelerated networks use the state-of-the-art Titan V GPU to execute OpenCL kernels, while the limited resources available on the utilized FPGA creates a large bottleneck on the maximum synthesizable frequency, and thus limits the speed of our FPGA-accelerated networks. We believe the shorter inference times observed are mainly due to the binarized parameters during inference, which accelerate the required computations. This also explains why, when no regularizer is used, our GPU-accelerated implementations require shorter inference times than our FPGA-accelerated implementations. Modern FPGAs such as the Stratix® V GXA7 and Virtex-7 VX485T, used in other recent works [7, 10], are expected to demonstrate even more significant improvements in speed during training and inference. This promises further inference acceleration for FPGA-based deterministically and stochastically binarized networks.

We designed and implemented various FC and convolutional BNN architectures using the high-level OpenCL framework. We then accelerated the developed networks on both GPUs and FPGAs. The performance, power, and learning/inference times of these network architectures were investigated. It was found that both FPGA-accelerated BNNs with deterministic and stochastic regularizers have reduced inference times on MNIST and CIFAR-10 by an order of magnitude, compared to the no-regularized FPGA case. They require >25% shorter inference times than their GPU counterparts. Moreover, our FPGA-accelerated BNNs consumed less than 16× the power required by non-regularized GPU-accelerated networks. Finally, our BNNs achieved only slightly degraded validation errors on MNIST, and in some instances, outperformed our baseline non-regularized GPU-accelerated networks on CIFAR-10. In summary, our modular and scalable FC and CNN network architectures can be extrapolated to accelerate larger and more complex networks.