We consider the problem of minimizing the sum of an average function of a large number of smooth convex components and a general, possibly non-differentiable, convex function. Although many methods have been proposed to solve this problem with the assumption that the sum is strongly convex, few methods support the non-strongly convex cases. Adding a small quadratic regularization is a common trick used to tackle non-strongly convex problems; however, it may worsen the quality of solutions or weaken the performance of the algorithms. Avoiding this trick, we propose a new accelerated stochastic mirror descent method for solving the problem without the strongly convex assumption. Our method extends the deterministic accelerated proximal gradient methods of Paul Tseng and can be applied even when proximal points are computed inexactly. Our direct algorithms can be proven to achieve the optimal convergence rate O(1/k^2) under a suitable choice of the errors in calculating the proximal points. We also propose a scheme for solving the problem when the component functions are non-smooth and finally apply the new algorithms to a class of composite convex concave optimization problems. 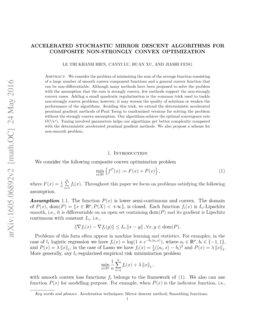 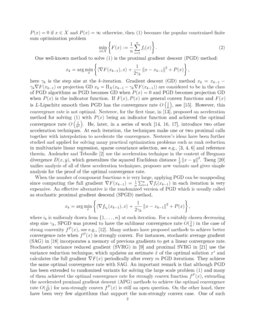 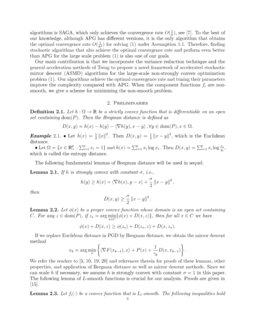 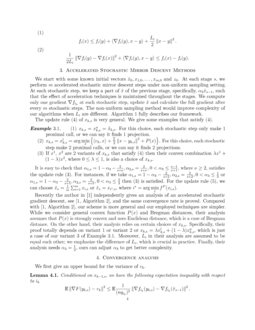 The motivation for this paper stems from the desire to develop an adapti...
Yuchen Xie, et al. ∙

The goal of this paper is to reduce the total complexity of gradient-bas...
Qihang Lin, et al. ∙

where F(x)=1nn∑i=1fi(x). Throughout this paper we focus on problems satisfying the following assumption.

The function P(x) is lower semi-continuous and convex. The domain of P(x), dom(P)={x∈E,P(X)<+∞}, is closed. Each function fi(x) is convex and Li-Lipschitz smooth, i.e., it is differentiable on an open set containing dom(P) and its gradient is Lipschitz continuous with constant Li

Problems of this form often appear in machine learning and statistics. For examples, in the case of

fi belongs to the framework of (1). We also can use the function P(x) for modelling purpose. For example, when P(x) is the indicator function, i.e., P(x)=0 if x∈X and P(x)=∞ otherwise, (1) becomes the popular constrained finite sum optimization problem

Previous methods and motivation for our work:

One well-known method to solve (1) is the proximal gradient descent (PGD) method. Let the proximal mapping of a convex function P(x) be defined as

At each iteration, PGD calculates a proximal point

where γk is the step size at the k-th iteration. Methods such as gradient descent, which computes xk=xk−1−γk∇F(xk−1), or projection gradient descent, which computes xk=ΠX(xk−1−γk∇F(xk−1)), are considered to be in the class of PGD algorithms. In particular, PGD becomes gradient descent when P(x)=0 and becomes projection gradient descent when P(x) is the indicator function. If F(x) and P(x) are general convex functions and F(x) is L-Lipschitz smooth then PGD has the convergence rate O(1k) (see [26]). However, this convergence rate is not optimal. Nesterov, for the first time in [24], proposed an acceleration method for solving (1) with P(x) being an indicator function and achieved the optimal convergence rate O(1k2). Later in a series of work [25, 27, 28]

, he introduced two other acceleration techniques, which make one or two proximal calls together with interpolation at each iteration to accelerate the convergence. Nesterov’s ideas have been further studied and applied for solving many practical optimization problems such as rank reduction in multivariate linear regression and sparse covariance selection (see e.g.,

[4, 5, 10] and reference therein). Auslender and Teboulle [3] used the acceleration technique in the context of Bregman divergence D(x,y), which generalizes the squared Euclidean distance 12∥x−y∥2. Tseng [36] unified the analysis of all these acceleration techniques, proposed new variants and gave simple analysis for the proof of the optimal convergence rate.

When the number of component functions n is very large, applying PGD can be unappealing since computing the full gradient ∇F(xk−1)=1n∑ni=1∇fi(xk−1) in each iteration is very expensive. An effective alternative is the randomized version of PGD which is usually called the stochastic proximal gradient descend (SPGD) method,

where ik is uniformly drawn from {1,…,n} at each iteration. For a suitably chosen decreasing step size γk, SPGD was proven to have the sublinear convergence rate O(1k) in the case of strong convexity fP(x) (see e.g., [23]). Many authors have proposed methods to achieve better convergence rate when fP(x) is strongly convex. For instances, stochastic average gradient (SAG) [32]

use the variance reduction technique, which updates an estimate

~x of the optimal solution x∗ and calculates the full gradient ∇F(x) periodically after every m SPGD iterations. They achieve the same optimal convergence rate as SAG.

As another goal, our work aims to solve problem (1) even for cases when proximal point with respect to P(x) cannot be computed explicitly. We note that for several choices of P(x), the proximal points at each iteration of the above-mentioned algorithms can be calculated efficiently. For example, when P(x)=∥x∥1, the proximal points are explicitly calculated by a soft threshold operator (see [29]). However, in many situations such as nuclear norm regularization and total variation regularization, it would be very expensive to compute them exactly. For that reason, many efficient methods have been proposed to calculate proximal points inexactly (see e.g., [9, 13, 21]). In the context of proximal-point algorithms, basic algorithms that allow inexact computation of proximal points were first studied by Rockafellar [30]. Since then, there has emerged a growing interest in both inexact proximal point algorithms and inexact accelerated proximal point algorithms (see e.g., [8, 9, 12, 16, 33, 34, 38, 41]). However, although there were many works showing impressive empirical performance of inexact (accelerated) PGD methods, there has been no analysis on randomized versions of proximal gradient descent methods. Our work gives such an analysis for an inexact algorithm for this problem.

[2, Algorithm 2], and the same convergence rate is proved. Compared with [2, Algorithm 2], as we are extending the general deterministic acceleration framework of Tseng [36], our analysis for exact ASMD is put in a more general framework but employs simpler and neater proofs in the setting of Bregman distance. The analysis of [2] totally depends on specific choices of xk,s in Update (3) of our Algorithm 1. Specifically, the proofs there rely on variant 1 or variant 2 of our Example 3.1.

The paper is organized as follows. In Section 2, we give some preliminaries for the paper. The exact and inexact accelerated stochastic mirror descent methods and their convergence analysis are considered in Section 3. In Section 4.1, we give an introduction to a class of composite convex concave optimization, consider a smoothing approximation for max-type functions and propose a version of iASMD to solve the problem. Finally, computational results are given in Section 5.

For a given continuous function f(x), a convex set X and a non-negative number ε, we write z≈εargminx∈X{f(x)+P(x)} to denote z∈dom(P) such that f(z)+P(z)≤minx∈X{f(x)+P(x)}+ε. We use ∇1g(x,y) to denote the gradient of the function x↦g(x,y) at x. We now give some important definitions and lemmas that will be used in the paper.

Let h:Ω→R be a strictly convex function that is differentiable on an open set containing dom(P). Then the Bregman distance is defined as

The following lemmas are fundamental properties of Bregman distance.

If h is strongly convex with constant σ, i.e.,

Let ϕ(x) be a proper convex function whose domain is an open set containing C. For any z∈dom(P), if z∗=argminx∈C{ϕ(x)+D(x,z)}, then for all x∈domP we have

If we replace Euclidean distance in PGD by Bregman distance, we obtain the mirror descent method

We refer the readers to [7, 19, 35, 36] and references therein for proofs of these lemmas, other properties, and application of Bregman distance as well as mirror descent methods. Since we can scale h if necessary, we assume h is strongly convex with constant σ=1 in this paper. The following lemma of L-smooth functions is crucial for our analysis. Proofs are given in [26].

Let fi(⋅) be a convex function that is Li-smooth. The following inequalities hold

In this section, we describe the framework of ASMD, give analysis on convergence rate of exact ASMD as well as inexact ASMD, and propose a scheme for solving (1) when some component functions are non-smooth.

We start with some known initial vectors ~x0,x1,0,…,xm,0 and z0. At each stage s, we perform m accelerated stochastic mirror descent steps under non-uniform sampling setting. At each stochastic step, we keep a part of ~x of the previous stage, specifically, α3~xs−1, such that the effect of acceleration techniques is maintained throughout the stages. For inexact ASMD, we let εs be the error in calculating the proximal points of the stochastic step k at stage s. When εs=0, we receive exact ASMD. The non-uniform sampling method would improve complexity of our algorithms when Li are different. Algorithm 1 fully describes our framework.

The set Xs at stage s should be chosen such that it contains a solution of (1), see Proposition 3.2. Choosing Xs=E is the simplest variant of Xs. To accelerate convergence, we can always choose a smaller Xs. We refer the readers to [36, Section 3] for examples of choosing smaller Xs and ignore the details here.

The update rule (3) of xk,s is very general. We give some examples that satisfy (3).

We first give an upper bound for the variance of vk.

Conditioned on xk−1,s, we have the following expectation inequality with respect to ik

The following proof is also given in [39, Corollary 3].

where the second equality is from the fact that E∥Z−EZ∥2=E∥Z∥2−∥EZ∥2. ∎

The following Lemma serves as the cornerstone to obtain Proposition 3.1, which provides a recursive inequality within m stochastic steps at each stage s.

For each stage s, the following inequality holds true

For simplicity, we ignore the subscript s when necessary. Applying the first inequality of Lemma 2.4, we have

Let , i.e., ¯zk,s is the exact proximal point of the stochastic step k at stage s. For all x∈Xs∩dom(P) we have

The result follows then. ∎

Considering a fixed stage s, for any x∈Xs∩dom(P), if fP(x)≤fP(xk,s) then we have

For simplicity, we ignore the subscript s if necessary. Applying Lemma 3.2, we have

We now apply Lemma 3.3 to yield that for all x∈Xs∩dom(P) we have

Together with (6) we deduce

On the other hand, applying Lemma 3.1, the second inequality of Lemma 2.4 and noting that 1LQnqi≤1Li, we have

As ~xs−1 appears in the recursive inequality, the acceleration effect works through the outer stage s. The following Proposition is a consequence of Proposition 3.1. It leads to the optimal convergence rate of our scheme, which is stated in Theorem 3.1 and Theorem 3.2.

Applying Proposition 3.1 with x=x∗ we have

Combining with the update rule (2) we obtain