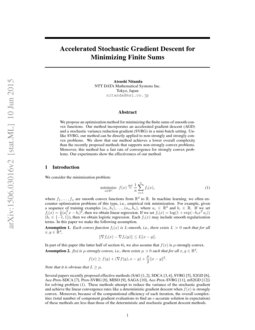 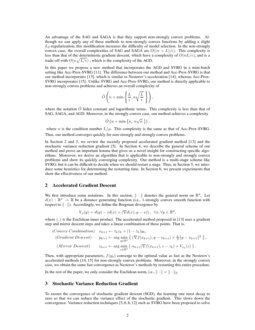 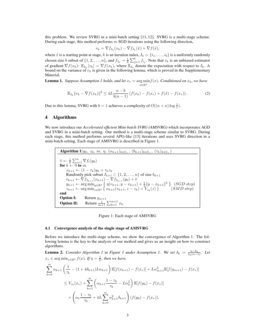 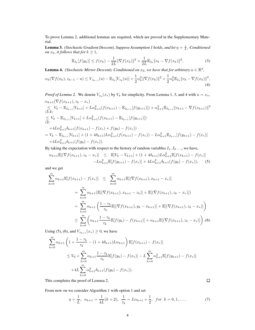 We consider the problem of minimizing the sum of an average function of ...
Le Thi Khanh Hien, et al. ∙

In this paper, we introduce a simplified and unified method for finite-s...
Chaobing Song, et al. ∙

Convex regression (CR) is the problem of fitting a convex function to a ...
Andrea Simonetto, et al. ∙

We consider the minimization problem:

where f1,…,fn are smooth convex functions from Rd to R

. In machine learning, we often encounter optimization problems of this type, i.e., empirical risk minimization. For example, given a sequence of training examples

, then we obtain linear regression. If we set

), then we obtain logistic regression. Each

fi(x) may include smooth regularization terms. In this paper we make the following assumption.

Each convex function fi(x) is L-smooth, i.e., there exists L>0 such that for all x,y∈Rd,

In part of this paper (the latter half of section 4), we also assume that f(x) is μ-strongly convex.

Note that it is obvious that L≥μ.

Several papers recently proposed effective methods (SAG[1, 2], SDCA[3, 4], SVRG[5], S2GD[6], Acc-Prox-SDCA[7], Prox-SVRG[8], MISO[9], SAGA[10], Acc-Prox-SVRG[11], mS2GD[12]) for solving problem (1). These methods attempt to reduce the variance of the stochastic gradient and achieve the linear convergence rates like a deterministic gradient descent when f(x) is strongly convex. Moreover, because of the computational efficiency of each iteration, the overall complexities (total number of component gradient evaluations to find an ϵ-accurate solution in expectation) of these methods are less than those of the deterministic and stochastic gradient descent methods.

where the notation ~O hides constant and logarithmic terms. This complexity is less than that of SAG, SAGA, and AGD. Moreover, in the strongly convex case, our method achieves a complexity

where κ is the condition number L/μ. This complexity is the same as that of Acc-Prox-SVRG. Thus, our method converges quickly for non-strongly and strongly convex problems.

In Section 2 and 3, we review the recently proposed accelerated gradient method [13] and the stochastic variance reduction gradient [5]

. In Section 4, we describe the general scheme of our method and prove an important lemma that gives us a novel insight for constructing specific algorithms. Moreover, we derive an algorithm that is applicable to non-strongly and strongly convex problems and show its quickly converging complexity. Our method is a multi-stage scheme like SVRG, but it can be difficult to decide when we should restart a stage. Thus, in Section 5, we introduce some heuristics for determining the restarting time. In Section 6, we present experiments that show the effectiveness of our method.

We first introduce some notations. In this section, ∥⋅∥ denotes the general norm on Rd. Let d(x):Rd→R be a distance generating function (i.e., 1-strongly convex smooth function with respect to ∥⋅∥). Accordingly, we define the Bregman divergence by

where (,) is the Euclidean inner product. The accelerated method proposed in [13] uses a gradient step and mirror descent steps and takes a linear combination of these points. That is,

Then, with appropriate parameters, f(yk) converge to the optimal value as fast as the Nesterov’s accelerated methods [14, 15] for non-strongly convex problems. Moreover, in the strongly convex case, we obtain the same fast convergence as Nesterov’s methods by restarting this entire procedure.

In the rest of the paper, we only consider the Euclidean norm, i.e., ∥⋅∥=∥⋅∥2.

To ensure the convergence of stochastic gradient descent (SGD), the learning rate must decay to zero so that we can reduce the variance effect of the stochastic gradient. This slows down the convergence. Variance reduction techniques [5, 8, 6, 12] such as SVRG have been proposed to solve this problem. We review SVRG in a mini-batch setting [11, 12]. SVRG is a multi-stage scheme. During each stage, this method performs m SGD iterations using the following direction,

is an unbiased estimator of gradient

∇f(xk): EIk[vk]=∇f(xk), where EIk denote the expectation with respect to Ik. A bound on the variance of vk is given in the following lemma, which is proved in the Supplementary Material.

Suppose Assumption 1 holds, and let x∗=argminx∈Rdf(x). Conditioned on xk, we have

Due to this lemma, SVRG with b=1 achieves a complexity of O((n+κ)log1ϵ).

4.1 Convergence analysis of the single stage of AMSVRG

Before we introduce the multi-stage scheme, we show the convergence of Algorithm 1. The following lemma is the key to the analysis of our method and gives us an insight on how to construct algorithms.

To prove Lemma 2, additional lemmas are required, which are proved in the Supplementary Material.

(Stochastic Mirror Descent). Conditioned on xk, we have that for arbitrary u∈Rd,

This completes the proof of Lemma 2. ∎

Let bk+1,m∈Z+ be the minimum values satisfying the assumption of Theorem 1 for p=q=ϵ, i.e., bk+1=⌈n(k+2)ϵ(n−1)+k+2⌉ and m=⌈4√LVz0(x∗)ϵ(f(y0)−f(x∗))⌉. Then, from Theorem 1, we have an upper bound on the overall complexity (total number of component gradient evaluations to obtain ϵ-accurate solution in expectation):

where we used the monotonicity of bk+1 with respect to k for the first inequality. Note that the notation O also hides Vz0(x∗) and f(y0)−f(x∗).

In this subsection, we introduce AMSVRG, as described in Figure 2.

We consider the convergence of AMSVRG under the following boundedness assumption which has been used in a several papers to analyze incremental and stochastic methods (e.g., [16, 17]).

(Boundedness) There is a compact subset Ω⊂Rd such that the sequence {ws} generated by AMSVRG is contained in Ω.

Note that, if we change the initialization of z0←ws to z0←z:constant, the above method with this modification will achieve the same convergence for general convex problems without the boundedness assumption (c.f. supplementary materials). However, for the strongly convex case, this modified version is slower than the above scheme. Therefore, we consider the version described in Figure 2.

From Theorem 1, we can see that for small p and q (e.g. p=1/10, q=1/4), the expected value of the objective function is halved at every stage under the assumptions of Theorem 1. Hence, running AMSVRG for O(log(1/ϵ)) outer iterations achieves an ϵ-accurate solution in expectation. Here, we consider the complexity at stage s to halve the expected objective value. Let bk+1,ms∈Z+ be the minimum values satisfying the assumption of Theorem 1, i.e., bk+1=⌈n(k+2)p(n−1)+k+2⌉ and ms=⌈4√LVws(x∗)q(f(ws)−f(x∗))⌉. If the initial objective gap f(ws)−f(x∗) in stage s is larger than ϵ, then the complexity at stage is

where we used the monotonicity of bk+1 with respect to k for the first inequality. Note that by Assumption 3, {Vws(x∗)}s=1,2,… are uniformly bounded and notation O also hides Vws(x∗). The above analysis implies the following theorem.

Next, we consider the strongly convex case. We assume that f is a μ-strongly convex function. In this case, we choose the distance generating function d(x)=12∥x∥2, so that the Bregman divergence becomes Vx(y)=12∥x−y∥2. Let the parameters be the same as in Theorem 2. Then, the expected value of the objective function is halved at every stage. Because ms≤4√κq, where κ is the condition number L/μ, the complexity at each stage is

Thus, we have the following theorem.

Consider AMSVRG under Assumptions 1 and 2. Let parameters η,αk+1,τk,ms, and bk+1 be the same as those in Theorem 2. Then the overall complexity for obtaining ϵ-accurate solution in expectation is

This complexity is the same as that of Acc-Prox-SVRG. Note that for the strongly convex case, we do not need the boundedness assumption.

Table 1 lists the overall complexities of the AGD, SAG, SVRG, SAGA, Acc-Prox-SVRG, and AMSVRG. The notation ~O hides constant and logarithmic terms. By simple calculations, we see that

is the harmonic mean whose order is the same as

min{⋅,⋅}. Thus, as shown in Table 1, the complexity of AMSVRG is less than or equal to that of other methods in any situation. In particular, for non-strongly convex problems, our method potentially outperform the others.

The parameters of AMSVRG are essentially η,ms, and bk+1 (i.e., p) because the appropriate values of both αk+1 and τk can be expressed by η=1/L as in (7). It may be difficult to choose an appropriate ms which is the restart time for Algorithm 1. So, we propose heuristics for determining the restart time.

First, we suppose that the number of components n is sufficiently large such that the complexity of our method becomes O(n). That is, for appropriate ms, O(n) is an upper bound on ∑msk=0bk+1 (which is the complexity term). Therefore, we estimate the restart time as the minimum index m∈Z+ that satisfies ∑mk=0bk+1≥n. This estimated value is upper bound on ms (in terms of the order). In this paper, we call this restart method R1.

then we return yk and start the next stage.

Third, we propose the restart method R3, which is a combination of the above two ideas. When ∑mk=0bk+1 exceeds 10n, we restart Algorithm 1, and when

we return yk and restart Algorithm 1.

In this section, we compare AMSVRG with SVRG and SAGA. We ran an L2-regularized multi-class logistic regularization on mnist and covtype and ran an L2-regularized binary-class logistic regularization on rcv1. The datasets and their descriptions can be found at the LIBSVM website111http://www.csie.ntu.edu.tw/ cjlin/libsvmtools/datasets/. In these experiments, we vary regularization parameter λ in {0, 10−7, 10−6, 10−5}. We ran AMSVRG using some values of η from [10−2, 5×10] and p from [10−1, 10], and then we chose the best η and p.

The results are shown in Figure 3. The horizontal axis is the number of single-component gradient evaluations. Our methods performed well and outperformed the other methods in some cases. For mnist and covtype, AMSVRG R1 and R3 converged quickly, and for rcv1, AMSVRG R2 worked very well. This tendency was more remarkable when the regularization parameter λ was small.

Note that the gradient evaluations for the mini-batch can be parallelized [22, 21, 23], so AMSVRG may be further accelerated in a parallel framework such as GPU computing.

We propose method that incorporates acceleration gradient method and the SVRG in the increasing mini-batch setting. We showed that our method achieves a fast convergence complexity for non-strongly and strongly convex problems.

A Proof of the Lemma 1

To prove Lemma 1, the following lemma is required, which is also shown in [1].

be a set of vectors in

Rd and μ denote an average of {ξi}ni=1. Let I denote a uniform random variable representing a size b subset of {1,2,…,n}. Then, it follows that,

This finishes the proof of Lemma. ∎

We now prove the Lemma 1.

conditional variance of vk is as follows