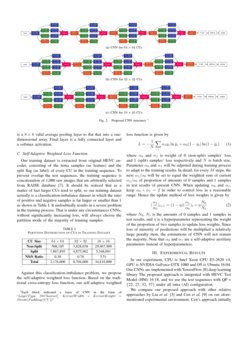 Adjoint operators have been found to be effective in the exploration of ...
Qing Wan, et al. ∙

In this paper, we propose a partition-masked Convolution Neural Network ...
Xiaoyi He, et al. ∙

It has recently been demonstrated that spatial resolution adaptation can...
Di Ma, et al. ∙

In VP9 video codec, the sizes of blocks are decided during encoding by r...
Somdyuti Paul, et al. ∙

High efficiency video coding (HEVC) [1] is the state-of-the-art video coding standards developed by the joint collaborative team on video coding (JCT-VC). HEVC supports four depth levels of coding units (CUs) at maximum, from 64×64 to 8×8, also known as CU quad-tree partition. By contrast with the fixed-size marcoblock supported in H.264 [2], this flexible partition structure leads that at the meantime of performance enhancement, CU partition decision becomes one of the most time-consuming modules in HEVC encoder. Currently, CU partition decision relies on a rate-distortion optimization (RDO) quad-tree search algorithm. Specifically HEVC encoder recursively in three depths, makes decision whether a CU split or not by comparing if the rate-distortion cost of the CU as a whole is higher than the sum of rate-distortion costs of four splited sub-CUs. In the light of this condition, so much encoding time is spent on CU partition decision that a faster approach of it is urgently required.

In the last few years, deep learning has successfully demonstrated its impressive performance on many varieties of fields. Convolutional neural networks (CNNs) specifically are able to extract features from images and then classify them to several types. Accordingly, an idea comes up that we can take advantages of CNNs to assist many decision modules in HEVC encoder. CNNs are able to boost the decision modules in HEVC encoding, such as CU partition, intra and inter prediction mode. For instance, CNNs can assist HEVC encoder to decide CU partition much faster than traditional method. At the meantime, since CNNs are able to achieve considerable accuracy of CU partition decision, RD performance of encoded video will hardly be aggravated.

Several CNN-based fast CU partition decision algorithms are emerging. Liu et al. [3] proposed a simple CNN structure to predict CU mode. Liu’s work mainly focuses on pipe-line to adapt hardware implementation, which is tough to be ported to another hardware or platform. Moreover, Li et al. [4] presented a deep CNN to decide three level CU partition, and in their CNN there are three branches with different sizes and quantities of convolution layers. On the other hand, none of feasible measure is taken during training process against the imbalance training samples issue. Xu et al. [5] raised a novel CNN structure to decide CU quad-tree partition over three depths at one time. Within a 64×64 CU, Xu’s proposed CNNs utilize redundant neighbor sub-CUs to sub-CU partition decision in second and third depth.

In this paper, we propose a novel two-stage approach in order to accelerate CU partition decision. The first stage of the proposed approach is a rough early-termination algorithm based on the range of CU luma samples that directly related to CU partition mode. This early-termination algorithm will be applied before CNN-based stage to filter some evident non-split CUs out of the subsequent CNN in order to tightly restrain computational complexity. The second stage is CNNs designed and trained to precisely estimate the partition mode of ambiguous CUs that the first stage conveys. Due to the depth and width of our neural networks, our CNNs are able to accomplish much lower error rate. In a nutshell, the first stage, or the early-termination algorithm, is a rough but fast method to filter some evident homogeneous CUs, which plays an important part in complexity reduction. Then in the second stage the CNN-based CU partition algorithm is a final method with higher accuracy, which mainly concentrates on RD performance retention. As a result, the proposed two-stage approach gains the balance of time saving and RD loss.

CU partition mode is decided over three depths totally and CUs are determined to split or to non-split at each depth. In other word, CU partition decision at each depth is actually a binary classification problem, so we design a CU non-split/split classifier. The proposed approach measures range of CU luma samples firstly to filter homogeneous CUs to early terminate. Then CUs passed early-termination filter will be decided by three CNNs whether to split or not in each depth.

Aside from CNNs, we craft an early-termination algorithm to improve efficiency of whole proposed approach further. Apparently, homogeneous CUs have tendency to split into four sub-CUs and vice versa. Considering that, we do a statistical analysis on every CU luma samples in our training sequence. Given feasibility and computational complexity, we choose two most possible CU classification indicators, range and standard deviation of CU luma samples. Every range and standard deviation samples of our training dataset are separated into two groups i.e. ones of non-split CUs and ones of split CUs. Then, both selected indicators are assessed by probability density.

Consequently, we regard the range of CU luma samples as the indicator to classify CU partition. More clearly, the threshold are configured as 20 in 64×64 CUs, 25 in 32×32 CUs and 30 in 16×16 CUs. CUs whose range of luma samples below the threshold will be early terminated in this stage as shown in grey areas in Fig. 1.

In pursuit of higher accuracy than current CNN-based CU partition approaches, a deeper and wider CNN structure is introduced and crafted for CU partition decision in HEVC. Nevertheless, upon the trade-off of accuracy and computation complexity, the computational complexity of CNNs has to be controlled in an acceptable limitation. Hence we cannot only seek the highest accuracy by sacrifice of computational performance and the proposed CNNs are illustrated below.

64×64, 32×32 and 16×16 CU will be determined to non-split or split during encoding process. Thus, we design three large-scale CNNs to decide CU partition mode at each depth from 0 (64×64) to 3 (16×16). In each CNN, the input layer is two-dimensional normalized luma samples of the CU, and the output layer is two softmax activation units representing the probabilities of non-split and split. Our large-scale CNN structures are enlightened by GoogLeNet [6] comprising several Inception layers.

Particularly, frameworks and parameters of the proposed CNNs for each size of CU are elaborated in Fig. 2. At very beginning of each CNN, there is a 3×3

64×64 CUs, the first and third Inception layer for 32×32 CUs, and the second Inception layer for 16×16 CUs. For each CNN, the output of core framework is a 8×8×256 feature map, and there is a 8×8 valid average pooling layer to flat that into a one-dimensional array. Final layer is a fully connected layer and a softmax activation.

Our training dataset is extracted from original HEVC encoder, consisting of the luma samples (as feature) and the split flag (as label) of every CU in the training sequence. To prevent overlap the test sequences, the training sequence is concatenation of 1,000 raw images that are arbitrarily selected from RAISE database [7]. It should be noticed that as a matter of fact larger CUs tend to split, so our training dataset actually is a classification-imbalance dataset in which the ratio of positive and negative samples is far larger or smaller than 1 as shown in Table I. It undoubtedly results in a severe problem in the training process. That is under any circumstances CNNs, without significantly increasing loss, will always choose the partition mode of the majority of training samples.

where α0 and α1 is weight of 0 (non-split) samples’ loss and 1 (split) samples’ loss respectively and N is batch size. Parameter α0 and α1 will be adjusted during training process to adapt to the training results. In detail, for every M steps, the next α1/α0 will be set to equal the weighted sum of current α1/α0 of proportion of amounts of 0 samples and 1 samples in test results of present CNN. When updating α0 and α1, keep α0+α1=2 in order to control loss in a reasonable range. Hence the update method of loss weights is given by

where N0, N1 is the amounts of 0 samples and 1 samples in test results, and η

is a hyperparameter representing the weight of the proportion of two samples to update loss weights. Since loss of minority of predictions will be multiplied a relatively large penalty item, the estimations of CNN will not remain the majority. Note that

α0 and α1 are a self-adaptive auxiliary parameters instead of hyperparameters.

We compare our proposed approach with other relative approaches by Liu et al. [3] and Cen et al. [9] on our aforementioned experimental environment. Cen’s approach initially calculates the rarest depth (0 or 3) which will be skipped in subsequent algorithm, and then CU depth is determined from the remaining depths by the comparison algorithm with adjacent CUs. The experimental results are shown in Table II, including the Bjontegaard delta bitrate(BD-BR), Bjontegaard delta peak signal-to-noise(BD-PSNR) [10] and the encoding time saving (TS) of three approaches with original HM encoder as anchor. And the time saving is given by

where Torig and Tprop is the encoding time of original and proposed encoder respectively.

In this paper, we proposed a novel CU partition decision approach in HEVC, which has been proved to have ability to reduce encoding time without significantly impairing RD performance. As presented above, the proposed approach has two stages in which range of CU luma samples and three CNNs targeting each CU size are utilized to decide a CU partition mode. Relieving computational complexity of CU partition decision, the proposed approach reduces nearly 37% encoding time with ignorable 2.69% BD-BR rise in comparison with the original HM 16.18 encoder.