An abelian anti-power of order k (or simply an abelian k-anti-power) is a concatenation of k consecutive words of the same length having pairwise distinct Parikh vectors. This definition generalizes to the abelian setting the notion of a k-anti-power, as introduced in [G. Fici et al., Anti-powers in infinite words, J. Comb. Theory, Ser. A, 2018], that is a concatenation of k pairwise distinct words of the same length. We aim to study whether a word contains abelian k-anti-powers for arbitrarily large k. S. Holub proved that all paperfolding words contain abelian powers of every order [Abelian powers in paper-folding words. J. Comb. Theory, Ser. A, 2013]. We show that they also contain abelian anti-powers of every order. 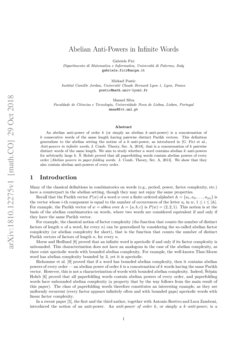 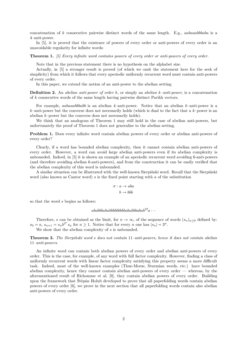 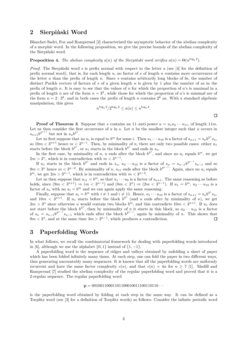 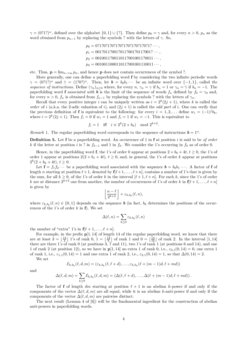 Algorithms for Anti-Powers in Strings

Fici et al. defined a word to be a k-power if it is the concatenation of...
Lukas Fleischer, et al. ∙

Embedding a θ-invariant code into a complete one

Let A be a finite or countable alphabet and let θ be a literal (anti)mor...
Jean Néraud, et al. ∙

We present an implementation of E-anti-unification as defined in Heinz (...
Jochen Burghardt, et al. ∙

A Comprehensive Theory and Variational Framework for Anti-aliasing Sampling Patterns

In this paper, we provide a comprehensive theory of anti-aliasing sampli...
A. Cengiz Öztireli, et al. ∙

Anti-Alignments – Measuring The Precision of Process Models and Event Logs

Processes are a crucial artefact in organizations, since they coordinate...
Thomas Chatain, et al. ∙

Many of the classical definitions in combinatorics on words (e.g., period, power, factor complexity, etc.) have a counterpart in the abelian setting, though they may not enjoy the same properties.

Recall that the Parikh vector P(w) of a word w over a finite ordered alphabet A={a1,a2,…,a|A|} is the vector whose i-th component is equal to the number of occurrences of the letter ai in w, 1≤i≤|A|. For example, the Parikh vector of w=abbca over A={a,b,c} is P(w)=(2,2,1). This notion is at the basis of the abelian combinatorics on words, where two words are considered equivalent if and only if they have the same Parikh vector.

In a recent paper [5], the first and the third author, together with Antonio Restivo and Luca Zamboni, introduced the notion of an anti-power. An anti-power of order k, or simply a k–anti-power, is a concatenation of k consecutive pairwise distinct words of the same length. E.g., aabaaabbbaba is a 4–anti-power.

Note that in the previous statement there is no hypothesis on the alphabet size.

Actually, in [5] a stronger result is proved (of which we omit the statement here for the seek of simplicity) from which it follows that every aperiodic uniformly recurrent word must contain anti-powers of every order.

In this paper, we extend the notion of an anti-power to the abelian setting.

An abelian anti-power of order k, or simply an abelian k–anti-power, is a concatenation of k consecutive words of the same length having pairwise distinct Parikh vectors.

We think that an analogous of Theorem 1 may still hold in the case of abelian anti-powers, but unfortunately the proof of Theorem 1 does not generalize to the abelian setting.

A similar situation can be illustrated with the well-known Sierpiǹski word. Recall that the Sierpiǹski word (also known as Cantor word) s is the fixed point starting with a of the substitution

so that the word s begins as follows:

We show that the abelian complexity of s is unbounded.

The abelian complexity a(n) of the Sierpiǹski word verifies a(n)=Θ(nlog32).

Proof of Theorem 3. Suppose that s contains an 11–anti-power u=u1u2⋯u11, of length 11m. Let us then consider the first occurrence of u in s. Let n be the smallest integer such that u occurs in sn+1b3n+1 but not in snb3n.

In the first case, by minimality of n, u ends after the block b3n, and since no ui equals bm, we get 2m>3n, which is in contradiction with m<3n−1.

In what follows, we recall the combinatorial framework for dealing with paperfolding words introduced in [6], although we use the alphabet {0,1} instead of {1,−1}.

is the paperfolding word obtained by folding at each step in the same way. It can be defined as a Toeplitz word (see [3] for a definition of Toeplitz words) as follows: Consider the infinite periodic word γ=(0?1?)ω, defined over the alphabet {0,1}∪{?}. Then define p0=γ and, for every n>0, pn as the word obtained from pn−1 by replacing the symbols ? with the letters of γ. So,

etc. Thus, p=limn→∞pn, and hence p does not contain occurrences of the symbol ?.

More generally, one can define a paperfolding word f by considering the two infinite periodic words γ=(0?1?)ω and ¯γ=(1?0?)ω. Then, let {b}=b0b1⋯ be an infinite word over {−1,1}, called the sequence of instructions. Define (γn)n≥0 where, for every n, γn=γ if bn=1 or γn=¯γ if bn=−1. The paperfolding word f associated with b is the limit of the sequence of words fn defined by f0=γ0 and, for every n>0, fn is obtained from fn−1 by replacing the symbols ? with the letters of γn.

The regular paperfolding word corresponds to the sequence of instructions {b}=1ω.

where εk,bk(ℓ,n)∈{0,1} depends on the sequence b (in fact, bk determines the positions of the occurrences of the 1’s of order k in f). We set

The next result (Lemma 4 of [6]) will be the fundamental ingredient for the construction of abelian anti-powers in paperfolding words.

be the morphism that identifies words of length 2 over the alphabet {0,1} that are abelian equivalent. We have the following lemma:

and since two words commute if and only if they are powers of the same word, there exists a word z and positive integers s and t such that

By the Toeplitz construction of p, we immediately have that

Suppose q′≠1 and q′≠2n−1. Since q′ is even, we have that Φ(uivi)=Φ(ui+q′vi+q′) implies uivi=ui+q′vi+q′. But this cannot be the case, since two consecutive letters of order j occur in p at distance 2j+1. Since j≤n−2, we have 2j+2≤2n, so the factor p contains at least two consecutive letters of order j. Suppose that the first of such letters is ui; then ui+q′ is at distance 2q′=2j+1, so ui+q′≠ui, against the hypothesis that q′ is a solution of (1).

The regular paperfolding word contains abelian m-anti-powers for every m≥2.

The proof is mainly based on the Additivity Lemma. Let m≥2 be fixed. To prove the result it is sufficient to find a vector Δ(s,d,m) having pairwise distinct components. Let k be an integer such that 2k≥m. Consider the first factor of length 2k+2−1 containing a 1 of order k in the middle; our factor is then of the form

then, up to applying a translation, we can suppose w=w′. In fact, the equality is true for every letter of order smaller than k by (2). Now, take the smallest order r>k of a letter 0 in w or w′. It is the only letter of this order in our factor since two letters of order r are distant of 2r+1>|w1w′|. If we consider the factor translated by 2r+1, by (2) the letters of order smaller than r are the same and the letter we considered becomes a 1. Since the length of w1w′ is 2k+2−1 and the distance between two letters of order higher than k is at least 2k+2, we have that in less than 2 steps we get w1w with every letter of order greater than k being a 1. Writing ℓ+1 the starting position of an occurrence in p of the factor w1w, we set ℓ′=ℓ if ℓ is even or ℓ′=ℓ+1 otherwise. Consider the vectors

but this and (3) contradicts Lemma 7.

To generalize the result above to all paperfolding words, one has to take care of the condition bi=bi+r in the Additivity Lemma.

Lemma 7 can be modified so that the translation is not by 2 but by 2u, for any u>1. Let

be the morphism that identifies words of length 2u over {0,1} that are abelian equivalent. Then we have the following lemma, analogous to Lemma 7:

Now, we can prove the main theorem:

Every paperfolding word f contains abelian m-anti-powers for every m≥2.

Let k be an integer such that 2k≥m. As before, we will prove that f contains abelian 2k-anti-powers, hence it will contain abelian m-anti-powers. Since the alphabet {0,1} is finite, there must exist a factor bu−1⋯bu+k+4 of b that occurs infinitely often. As before, let us start with the first block of length 2u+k+2−1 containing a 1 of order u+k in the middle; our block is then

with |w|=|w′|=2u+k+1−1. As before, in at most two steps, we can have w=w′, and the maximum order of a letter appearing in this factor is u+k+4. Again, writing ℓ the starting position of an occurrence of this factor, we set ℓ′=ℓ if ℓ is even or ℓ′=ℓ+1 otherwise. Consider the vectors

and this contradicts Lemma 9 because, here again, w=w′ and so

From Theorem 10 it follows immediately that every paperfolding word has unbounded abelian complexity.