A Weighted Likelihood Approach Based on Statistical Data Depths

We propose a general approach to construct weighted likelihood estimating equations with the aim of obtain robust estimates. The weight, attached to each score contribution, is evaluated by comparing the statistical data depth at the model with that of the sample in a given point. Observations are considered regular when the ratio of these two depths is close to one, whereas, when the ratio is large the corresponding score contribution may be downweigthed. Details and examples are provided for the robust estimation of the parameters in the multivariate normal model. Because of the form of the weights, we expect that, there will be no downweighting under the true model leading to highly efficient estimators. Robustness is illustrated using two real data sets. 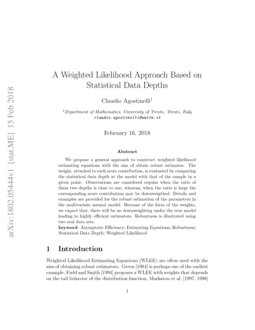 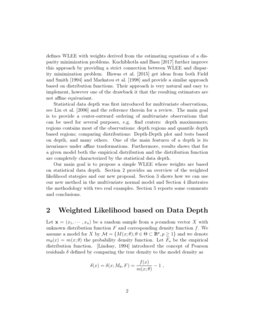 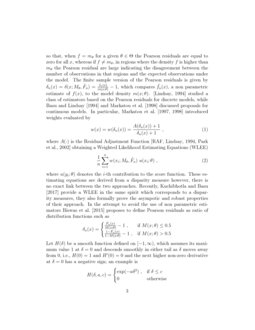 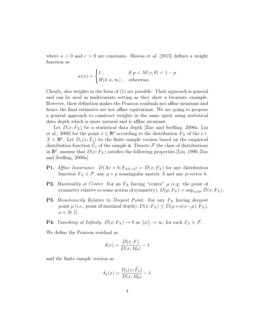 Weighted Likelihood Estimating Equations (WLEE) are often used with the aim of obtaining robust estimators. Green [1984] is perhaps one of the earliest example, Field and Smith [1994] proposes a WLEE with weights that depends on the tail behavior of the distribution function, Markatou et al. [1997, 1998] defines WLEE with weights derived from the estimating equations of a disparity minimization problems. Kuchibhotla and Basu [2017] further improve this approach by providing a strict connection between WLEE and disparity minimization problem. Biswas et al. [2015] get ideas from both Field and Smith [1994] and Markatou et al. [1998] and provide a similar approach based on distribution functions. Their approach is very natural and easy to implement, however one of the drawback it that the resulting estimators are not affine equivariant.

and the reference therein for a review. The main goal is to provide a center-outward ordering of multivariate observations that can be used for several purposes, e.g. find centers: depth maximumers; regions contains most of the observations: depth regions and quantile depth based regions; comparing distributions: Depth-Depth plot and tests based on depth, and many others. One of the main features of a depth is its invariance under affine trasformations. Furthermore, results shows that for a given model both the empirical distribution and the distribution function are completely characterized by the statistical data depth.

Our main goal is to propose a simple WLEE whose weights are based on statistical data depth. Section 2 provides an overview of the weighted likelihood stategies and our new proposal. Section 3 shows how we can use our new method in the multivariate normal model and Section 4 illustrates the methodology with two real examples. Section 5 reports some comments and conclusions.

2 Weighted Likelihood based on Data Depth

X with unknown distribution function F and corresponding density function f. We assume a model for X by M={M(x;θ);θ∈Θ⊂Rp,p≥1} and we denote mθ(x)=m(x;θ)

^Fn be the empirical distribution function. [Lindsay, 1994] introduced the concept of Pearson residuals δ defined by comparing the true density to the model density as

where u(yi;θ) denotes the i-th contribution to the score function. These estimating equations are derived from a disparity measure however, there is no exact link between the two approaches. Recently, Kuchibhotla and Basu [2017] provide a WLEE in the same spirit which corresponds to a disparity measures, they also formally prove the asympotic and robust properties of their approach. In the attempt to avoid the use of non parametric estimators Biswas et al. [2015] proposes to define Pearson residuals as ratio of distribution functions such as

Clearly, also weights in the form of (1) are possible. Their approach is general and can be used in multivariate setting as they show a bivariate example. However, their definition makes the Pearson residuals not affine invariant and hence the final estimates are not affine equivariant. We are going to propose a general approach to construct weights in the same spirit using statistical data depth which is more natural and is affine invariant.

Maximality at Center. For an FX having “center” μ (e.g. the point of symmetry relative to some notion of symmetry), D(μ;FX)=supx∈RpD(x;FX).

We define the Pearson residual as

and the finite sample version as

This Pearson residual have the desired behaviour being equal to 0 whenever F=Mθ for some θ∈Θ, and of attaining large values in regions where the two distributions are mismatched; furthermore, because of the invariance property P1. of D, the Pearson residual is also invariant to affine transformations. For most depths a uniform convergence of Dn(x;^Fn) to D(x;F) holds almost surely; hence we expect that, at the model, the proposed method is highly efficient. Using weights based on (1) or (2) leads to a WLEE that can be solved by an iterative reweigthing algorithm.

3 Application to the Multivariate Normal model

Consider Mθ be a Multivariate Normal model where θ=(μ,Σ), μ is the mean vector and Σ

is the variance-covariance matrix. We discuss how to evaluate the proposed Pearson residual using the halfspace depth. We first review the concept of halfspace depth

is the positive side of the hyperplane

HPu(a)={z∈Rp:u⊤z=a}. The negative side HS−u(a) of HPu(a) is similarly defined. Halfspace depth is the minimum probability of all halfspaces including x.

The halfspace depth dHS(x;X) maps x∈Rp to the minimum probability, according to the random vector X, of all closed halfspaces including x, that is

This statistical data depth is particularly usefull since its properties. In particular, Struyf and Rousseeuw [1999, Theorem 1] show that the finite sample halfspace depth characterizes the empirical distribution. Kong and Zuo [2010, Corollary 3.1] show that the halfspace depth characterizes the underlying distribution. Furthermore, Zuo and Serfling [2000b, Theorem 3.3, Corollay 4.3] shows that the halfspace depth for a multivariate normal model can be easily obtained since D(x;Mθ)=(1−Fχ2p(d(x;θ)))/2 where d(x,θ)=(x−μ)⊤Σ−1(x−μ) is the squared Mahalanobis distance and Fχ2p is the distribution function of a χ2p chi-squared with pdegrees of freedom random variable. Finally, calculation of the finite sample halfspace depth in a dimension p can be performed efficiently using the algorithms proposed in Liu [2017] and Dyckerhoff and Mozharovskyi [2016] and available in the R package ddalpha by Pokotylo et al. [2016]. Similar results are available for any model belonging to the elliptically symmetric family of distributions.

We consider the data set pb52 available in the R package phonTools Barreda [2015] which contains the Vowel Recognition Data considered in Peterson and Barney [1952], see also Boersma and Weenink [2012]. In a first example a bivariate data set is illustrated, where we consider the vowels “u” (close back rounded vowel) and “æ” (near-open front unrounded vowel, “{” as x-sampa symbol) with a sample of size 304 equally divided for each vowel and the log transformed F1 and F2 frequencies measured in Hz. Our procedure use the following settings α=0.5, a=0.05, c=200, and uses 500 subsamples of size 6 as starting values for finding the roots. We also consider the Maximum Likelihood (MLE), the Minimum Covariance Determinant (MCD), the Minimum Volume Ellipsoid (MVE) and the S-Estimates (S) as implemented in the R package rrcov by Todorov and Filzmoser [2009], the last three procedures were used with the exaustive subsampling explorations. Figure 1 in the left panel reports the three estimates found by our methods. While the first root coincides with the MLE, the other two nicely identify the two subgroups. This is not the case for all the other investigated methods, see Figure 1 right panel, where the estimates are approximately all coincident with the MLE.

In a second example a trivariate data set is used considering vowels “u” (close back rounded vowel) and “” (open-mid central unrounded vowel, “3” or “3‵” as x-sampa symbol) with a sample of size 304 equally divided for each vowel and the log transformed F1, F2 and F3 frequencies measured in Hz. Figure (2) shows the results. For the classical robust procedures only MCD is able to somehow recover the structure of the observations for the vowels “”, while the other behave like the MLE. Our procedure finds nicely all the two substructure. For this data our procedure was set using α=0.25, a=0.1, c=30, and 1000 subsamples of size 6 as starting values for finding the roots. Using the setting of the first examples only the first two roots are found.

We have outlined a new form of weighted likelihood estimating equations where weights are based on comparing statistical data depth of the sample with that of the model. This approach avoids the use of nonparametric density estimates which can lead to problems for multivariate data, while retains nice characteristics of the classical WLEE approach, that are high efficiency at the model, affine equivariance and robustness. In the future, we hope to formally establish the theoretical properties of the proposed estimator.