Importance sampling Monte-Carlo methods are widely used for the approximation of expectations with respect to partially known probability measures. In this paper we study a deterministic version of such an estimator based on quasi-Monte Carlo. We obtain an explicit error bound in terms of the star-discrepancy for this method. 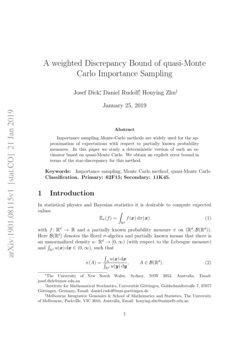 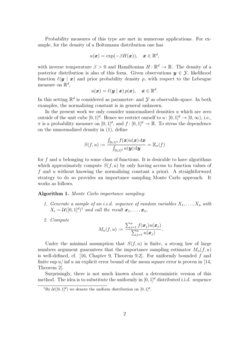 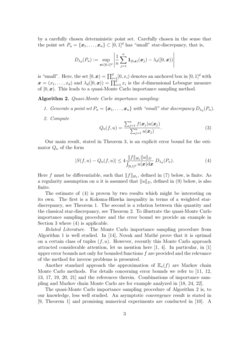 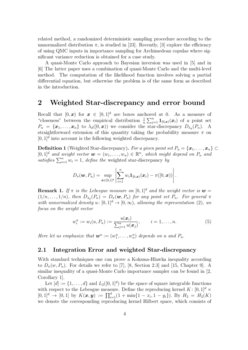 with f:Rd→R and a partially known probability measure π on (Rd,B(Rd)). Here B(Rd) denotes the Borel σ-algebra and partially known means that there is an unnormalized density u:Rd→[0,∞) (with respect to the Lebesgue measure) and ∫Rdu(x)dx∈(0,∞), such that

Probability measures of this type are met in numerous applications. For example, for the density of a Boltzmann distribution one has

with inverse temperature β>0 and Hamiltonian H:Rd→R. The density of a posterior distribution is also of this form. Given observations y∈Y, likelihood function ℓ(y∣x)

and prior probability density

p, with respect to the Lebesgue measure on Rd,

In this setting Rd is considered as parameter- and Y as observable-space. In both examples, the normalizing constant is in general unknown.

for f and u belonging to some class of functions. It is desirable to have algorithms which approximately compute S(f,u) by only having access to function values of f and u without knowing the normalizing constant a priori. A straightforward strategy to do so provides an importance sampling Monte Carlo approach. It works as follows.

Under the minimal assumption that S(f,u)

is finite, a strong law of large numbers argument guarantees that the importance sampling estimator

Surprisingly, there is not much known about a deterministic version of this method. The idea is to substitute the uniformly in [0,1]d distributed i.i.d. sequence by a carefully chosen deterministic point set. Carefully chosen in the sense that the point set Pn={x1,…,xn}⊂[0,1]d has “small” star-discrepancy, that is,

Our main result, stated in Theorem 3, is an explicit error bound for the estimator Qn of the form

Here f must be differentiable, such that ∥f∥H1, defined in (7) below, is finite. As a regularity assumption on u it is assumed that ∥u∥D, defined in (9) below, is also finite.

The estimate of (4) is proven by two results which might be interesting on its own. The first is a Koksma-Hlawka inequality in terms of a weighted star-discrepancy, see Theorem 1. The second is a relation between this quantity and the classical star-discrepancy, see Theorem 2. To illustrate the quasi-Monte Carlo importance sampling procedure and the error bound we provide an example in Section 3 where (4) is applicable.

Related Literature. The Monte Carlo importance sampling procedure from Algorithm 1 is well studied. In [14], Novak and Mathé prove that it is optimal on a certain class of tuples (f,u). However, recently this Monte Carlo approach attracted considerable attention, let us mention here [1, 4]. In particular, in [1] upper error bounds not only for bounded functions f are provided and the relevance of the method for inverse problems is presented.

Another standard approach the approximation of Eπ(f)

The quasi-Monte Carlo importance sampling procedure of Algorithm 2 is, to our knowledge, less well studied. An asymptotic convergence result is stated in [9, Theorem 1] and promising numerical experiments are conducted in [10]. A related method, a randomized deterministic sampling procedure according to the unnormalized distribution π, is studied in [23]. Recently, [3]

explore the efficiency of using QMC inputs in importance sampling for Archimedean copulas where significant variance reduction is obtained for a case study.

The latter paper uses a combination of quasi-Monte Carlo and the multi-level method. The computation of the likelihood function involves solving a partial differential equation, but otherwise the problem is of the same form as described in the introduction.

Recall that [0,x) for x∈[0,1]d are boxes anchored at 0. As a measure of “closeness” between the empirical distribution 1n∑nj=11[0,x)(xi) of a point set Pn={x1,…,xn} to λd([0,x)) we consider the star-discrepancy Dλd(Pn). A straightforward extension of this quantity taking the probability measure π on [0,1]d into account is the following weighted discrepancy.

With standard techniques one can prove a Koksma-Hlawka inequality according to Dπ(w,Pn). For details we refer to [7], [8, Section 2.3] and [15, Chapter 9]. A similar inequality of a quasi-Monte Carlo importance sampler can be found in [2, Corollary 1].

Let [d]:={1,…,d} and L2([0,1]d) be the space of square integrable functions with respect to the Lebesgue measure. Define the reproducing kernel K:[0,1]d×[0,1]d→[0,1] by K(x,y):=∏di=1(1+min{1−xi,1−yi}). By H2=H2(K) we denote the corresponding reproducing kernel Hilbert space, which consists of differentiable functions with respect to all variables with first partial derivatives being in L2([0,1]d). For f,g∈H2 the inner product is given by

Further, we define the space H1 of differentiable functions f:[0,1]d→R with finite norm

It is obvious that ∥f∥˜H1≤∥f∥H1.

We have the following relation between the integration error in H1 and the weighted discrepancy.

Here the dependence on u on the right-hand side is hidden in Dπ(wu,Pn) through wu and π. The intuition is, that under suitable assumptions on u the weighted star-discrepancy can be bounded by the classical star-discrepancy of Pn.

where the last inequality follows from Theorem 1 with w=(1/n,…,1/n) and constant unnormalized density. Further,

which implies the result. ∎

In particular, the theorem implies that whenever ∥u∥D is finite and Dλd(Pn) goes to zero as n goes to infinity, also Dπ(wu,Pn) goes to zero for increasing n with the same rate of convergence.

An immediate consequence of the results of the previous two sections is the following explicit error bound of the quasi-Monte Carlo importance sampling method of Algorithm 2.

Under the regularity assumption that ∥u∥D is finite, the error bound tells us that the classical star-discrepancy determines the rate of convergence on how fast Qn(f,u) goes to S(f,u).

Define the d-simplex by Δd:={x∈[0,1]d:∑di=1xi≤1} and consider the (slightly differently formulated) unnormalized density u:[0,1]d→[0,1) of the Dirichlet distribution with parameter vector α∈(1,∞)d+1 given by

The Dirichlet distribution is the conjugate prior of the multinomial distribution: Assume that we observed some data

The normalizing constant of u can be computed explicitly, it is known that

To have a feasible setting for the application of Theorem 1 and Theorem 2 we need to show that ∥u∥D is finite. This is not immediately clear, since in ∥u∥D we take the supremum over z∈[0,1]d. The following lemma is useful.