The problem of aggregation is considerable importance in many disciplines. In this paper, a new type of operator called visibility graph averaging (VGA) aggregation operator is proposed. This proposed operator is based on the visibility graph which can convert a time series into a graph. The weights are obtained according to the importance of the data in the visibility graph. Finally, the VGA operator is used in the analysis of the TAIEX database to illustrate that it is practical and compared with the classic aggregation operators, it shows its advantage that it not only implements the aggregation of the data purely, but also conserves the time information, and meanwhile, the determination of the weights is more reasonable. 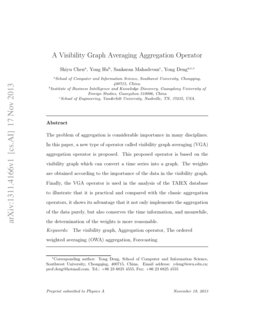 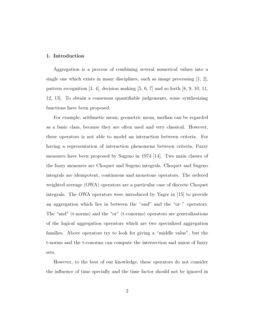 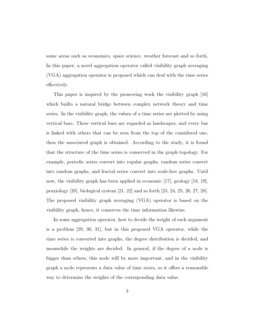 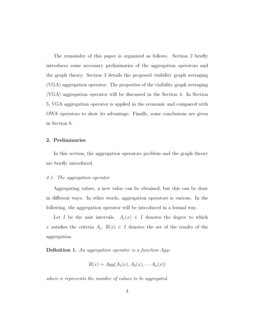 Aggregation is a process of combining several numerical values into a single one which exists in many disciplines, such as image processing Soria-Frisch (2001); Liu et al. (2013)

For example, arithmetic mean, geometric mean, median can be regarded as a basic class, because they are often used and very classical. However, these operators is not able to model an interaction between criteria. For having a representation of interaction phenomena between criteria, Fuzzy measures have been proposed by Sugeno in 1974

Sugeno (1974). Two main classes of the fuzzy measures are Choquet and Sugeno integrals. Choquet and Sugeno integrals are idempotent, continuous and monotone operators. The ordered weighted average (OWA) operators are a particular case of discrete Choquet integrals. The OWA operators were introduced by Yager in Yager (1988) to provide an aggregation which lies in between the “and” and the “or ” operators. The “and” (t-norms) and the “or” (t-conorms) operators are generalizations of the logical aggregation operators which are two specialized aggregation families. Above operators try to look for giving a “middle value”, but the t-norms and the t-conorms can compute the intersection and union of fuzzy sets.

However, to the best of our knowledge, these operators do not consider the influence of time specially and the time factor should not be ignored in some areas such as economics, space science, weather forecast and so forth. In this paper, a novel aggregation operator called visibility graph averaging (VGA) aggregation operator is proposed which can deal with the time series effectively.

In some aggregation operator, how to decide the weight of each argument is a problem Xu (2005); Filev and Yager (1998); Beliakov (2005), but in this proposed VGA operator, while the time series is converted into graphs, the degree distribution is decided, and meanwhile the weights are decided. In general, if the degree of a node is bigger than others, this node will be more important, and in the visibility graph a node represents a data value of time series, so it offers a reasonable way to determine the weights of the corresponding data value.

In this section, the aggregation operators problem and the graph theory are briefly introduced.

An aggregation operator is a function Agg:

where n represents the number of values to be aggregated.

Several fundamental conditions have been proposed to define the aggregation operators Mayor and Trillas (1986). The fundamental properties which generalize most of the precedent definitions are as follows Detyniecki (2001):

1)Identity when unary: If there is only one value needing to be aggregated, the result is itself.

3)Monotonicity: If the individual value increases the overall satisfaction should increase:

A graph is formed by vertices and edges connecting the vertices.

The degree d(v) of a vertex v is the number of edges at v.

In general, if a vertex has a big degree, it illustrates that this vertex links with many other vertices and it will be important.

To a time series, if there are i data values, the associated graph derived from the visibility algorithm will have i vertices. VGA operator is defined as follows:

VGA operator is a mapping F:

and where ai is the ith value in the time series, and wi is the weight of the value ai satisfies:

where di is the value of the degree at the vertex i.

It is necessary to notice that if there is only one value in the time series, in the associated visibility graph, there just exist one vertex and the degree of this vertex is equal to zero. Hence, the weight is revised as one, then we have:

If there is only one value in the time series, the VGA operator is as:

The following simple example illustrates the use of this VGA operator.

According to the Eq.2, the weights of the values can be computed as follows:

So according to the Eq.1, we have

The weights of the VGA operator are obtained according to the distribution of the degree in the visibility graph, because in the network, if a node links with more nodes than others, its degree will bigger and it will be more important than others. In the histogram, Whether the considered one can see others is relevant to the order of the data. The order in our VGA operator is decided by time. The order of the data is not set artificially, and instead it is restricted by time. In other words, the time information is conserved in the VGA operator.

In this section, we shall investigate some properties of this new operator. These properties will be divided into two parts: the mathematical properties and the time properties.

Stability for a linear function:

Here we consider some special cases to show its special time properties. Suppose that there is a periodic series with one special big value which is like the Figure 6 showing. In this figure, if a data value is bigger than others, it will be more important (In the VGA operator, its weight will be big), because it can see more other bars in the histogram, but with time passing, the number of bars that it can see will get smaller (In the VGA operator, its weight will get smaller). In the figure, the periodic series on the left and right sides of the special big value are divided into 4 groups. In the group 1, in total 8 values can be seen from the top of the special one. In the group 2, there are 6 values being seen. In the group 3, there are 4 values, but in the group, there are just 2 values. In other words, time will decrease the influence of a bigger value. This property reflects the reality. In the real world, some important events will influence other events, but with time passing, this influence will be decreased (In the VGA operator, the weights will be decreased), and the number of the events which are influenced by the important event will be decreased too.

a can be seen from the top of b will decrease, because with other data appearing between them, these data may block the sight. With the time passing, the distance between a and b will get bigger and bigger, then more and more other data will block between them, so the probability that they can see each other will get smaller. It means that time will decrease the probability of the connection between data. This situation is shown in the figure 8.

In addition, if an argument with big value lies in between two arguments which are just a little smaller than it, it can not connect many other arguments and its weight will not be great. It illustrates that at what time the argument with big value appears in the histogram is important. All of the time properties will influence the weights distribution in the VGA operator.

In this section, a case is used to illustrate the feasibility and the efficiency of the VGA operator. The VGA operator will be used in the analysis of the Taiwan Stock Exchange Capitalization Weighted Stock Index (TAIEX) database. In economic, forecasting can provide a superior investment strategy for investors. The problem is that it is difficult to handle high-order stock data, because it is hard to determine an appropriate weight to each period of past stock price. VGA operator will solve this problem conveniently.

The Taiwan Stock Exchange Capitalization Weighted Stock Index (TAIEX) of the year 2000-2012 is chosen as the forecasting basic data. The data of December from 2000 to 2012 which are listed in the Table 2 will be aggregated by VGA operator and OWA operators, respectively.

Where α characterizes the degree to which the aggregation is like an or operation.

The thirteen periods of stock prices, P(2000),P(2001),⋯,P(2012) will be aggregated. According to the OWA operators, the aggregated value is computed as follows:

Where Pi is the ith largest element of the price. The aggregated results are listed in the Table 6.

In this paper, a visibility graph averaging (VGA) aggregation operator is proposed. This aggregation operator converts data into the visibility graph, then decides the weights according to the degree distribution. The experimental result illustrates that the VGA operator is practical and compared with OWA operators, it shows its advantage that it does not need to calculate weights by other complicated methods and it can aggregate time series effectively, hence, we believe that it can be used in some areas such as economics, space science, weather forecast and so forth where it needs to analyze abundant data of time series.