The modeling of speech can be used for speech synthesis and speech recognition. We present a speech analysis method based on pole-zero modeling of speech with mixed block sparse and Gaussian excitation. By using a pole-zero model, instead of the all-pole model, a better spectral fitting can be expected. Moreover, motivated by the block sparse glottal flow excitation during voiced speech and the white noise excitation for unvoiced speech, we model the excitation sequence as a combination of block sparse signals and white noise. A variational EM (VEM) method is proposed for estimating the posterior PDFs of the block sparse residuals and point estimates of mod- elling parameters within a sparse Bayesian learning framework. Compared to conventional pole-zero and all-pole based methods, experimental results show that the proposed method has lower spectral distortion and good performance in reconstructing of the block sparse excitation. 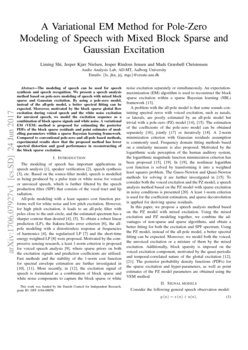 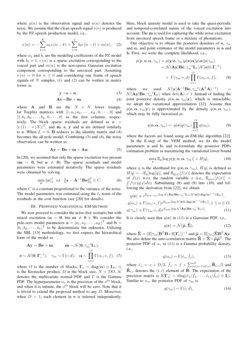 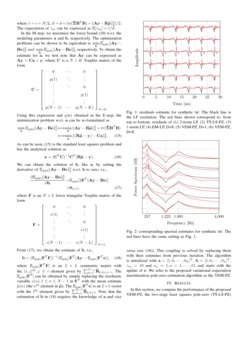 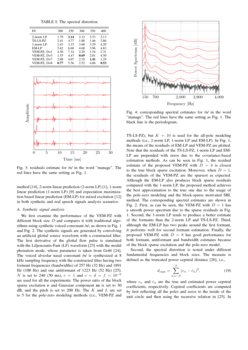 The modeling of speech has important applications in speech analysis [1], speaker verification [2], speech synthesis[3], etc. Based on the source-filter model, speech is modelled as being produced by a pulse train or white noise for voiced or unvoiced speech, which is further filtered by the speech production filter (SPF) that consists of the vocal tract and lip radiation.

All-pole modeling with a least squares cost function performs well for white noise and low pitch excitation. However, for high pitch excitation, it leads to an all-pole filter with poles close to the unit circle, and the estimated spectrum has a sharper contour than desired [4, 5]. To obtain a robust linear prediction (LP), the Itakura-Saito error criterion [6], the all-pole modeling with a distortionless response at frequencies of harmonics [4], the regularized LP [7] and the short-time energy weighted LP [8] were proposed. Motivated by the compressive sensing research, a least 1-norm criterion is proposed for voiced speech analysis [9], where sparse priors on both the excitation signals and prediction coefficients are utilized. Fast methods and the stability of the 1-norm cost function for spectral envelope estimation are further investigated in [10, 11]. More recently, in [12]

A problem with the all-pole model is that some sounds containing spectral zeros with voiced excitation, such as nasals, or laterals, are poorly estimated by an all-pole model but trivial with a pole-zero (PZ) model [14, 15]. The estimation of the coefficients of the pole-zero model can be obtained separately [16], jointly [17] or iteratively [18]. A 2-norm minimization criterion with Gaussian residuals assumption is commonly used. Frequency domain fitting methods based on a similarity measure is also proposed. Motivated by the logarithmic scale perception of the human auditory system, the logarithmic magnitude function minimization criterion has been proposed [19, 15]. In [19], the nonlinear logarithm cost function is solved by transforming it into a weighted least squares problem. The Gauss-Newton and Quasi-Newton methods for solving it are further investigated in [15]. To consider both the voiced excitation and the PZ model, a speech analysis method based on the PZ model with sparse excitation in noisy conditions is presented [20]. A least 1-norm criterion is used for the coefficient estimation, and sparse deconvolution is applied for deriving sparse residuals.

. The posterior probability density functions (PDFs) for the sparse excitation and hyper-parameters, as well as point estimates of the PZ model parameters are obtained using the VEM method.

where y(n) is the observation signal and u(n) denotes the noise. We assume that the clean speech signal s(n) is produced by the PZ speech production model, i.e.,

reduces to the identity matrix and (

4) becomes the all-pole model. Combining (3) and (4), the noisy observation can be written as

is a constant proportional to the variance of the noise. The model parameters was estimated using the

l1 norm of the residuals as the cost function (see [20] for details).

We now proceed to consider the noise-free scenario but with mixed excitation (u=0, but m≠0 ). We consider the pole-zero model parameters a=[a1,a2,⋯,aK]T and b=[b1,b2,⋯,bL]T to be deterministic but unknown. Utilizing the SBL [13] methodology, we first express the hierarchical form of the model as

where O is the number of blocks, Γe=diag(α)⊗ID, ⊗ is the Kronecker product, D is the block size, N=DO, N denotes the multivariate normal PDF and Γ

is the Gamma PDF. The hyperparameter

αo is the precision of the oth block, and when it is infinite, the oth block will be zero. Note that it is trivial to extend the proposed method to any D. Moreover, when D=1, each element in e is inferred independently. Here, block sparsity model is used to take the quasi-periodic and temporal-correlated nature of the voiced excitation into account. The m is used for capturing the white noise excitation from unvoiced speech frame or a mixture of phonations.

Our objective is to obtain the posterior densities of e, γm and α, and point estimates of the model parameters in a and b. First, we write the complete likelihood, i.e.,

where we used N(y|A−1Be,γ−1m(ATA)−1)=N(Ay|Be,γ−1mIN) when det(A)=1. Instead of finding the joint posterior density p(e,α,γm|y), which is intractable, we adopt the variational approximation [22]. Assume that p(e,α,γm|y) is approximated by the density q(e,α,γm), which may be fully factorized as

where the factors are found using an EM-like algorithm [22].

In the E-step of the VEM method, we fix the model parameters a and b, and re-formulate the posterior PDFs estimation problem as maximizing the variational lower bound

In the M-step, we maximize the lower bound (10) w.r.t. the modeling parameters a and b, respectively. The optimization problems can be shown to be equivalent to minaEq(e)∥Ay−Be∥22 and minbEq(e)∥Ay−Be∥22, respectively. To obtain the estimate for a, we first note that Ay can be expressed as Ay=Ca+y, where C is a N×K Toeplitz matrix of the form

Using this expression and q(e) obtained in the E-step, the minimization problem w.r.t. a can be re-formulated as

As can be seen, (III) is the standard least squares problem and has the analytical solution as

where Eq(e)[FTF] is an L×L symmetric matrix with the (i,j)th,j≥i element given by ∑N−jk=1~Rk,k+j−i. The Eq(e)[FT] can be obtained by simply replacing the stochastic variable e(n),1≤n≤N−1 in FT with the mean estimate ~μ(n) (the nth element in ~μ). The Eq(e)[FTe] is an L×1vector with the lth element given by ∑N−lk=1~Rk,k+l. Note that the estimation of b in (18) requires the knowledge of a and vice versa (see (16)). This coupling is solved by replacing them with their estimates from previous iteration. The algorithm is initialized with a=[1,0,⋯,0K]T, b=[1,0,⋯,0L]T, γm=10 and αo=1,o=1,⋯,O, and starts with the update of e. We refer to the proposed variational expectation maximization pole-zero estimation algorithm as the VEM-PZ.

We first examine the performance of the VEM-PZ with different block size D and compares it with traditional algorithms using synthetic voiced consonant /n/, as shown in Fig. 1 and Fig. 2. The synthetic signals are generated by convolving an artificial glottal source waveform with a constructed filter. The first derivative of the glottal flow pulse is simulated with the Liljencrants-Fant (LF) waveform [23] with the modal phonation mode, whose parameter is taken from Gobl [24]. The voiced alveolar nasal consonant /n/ is synthesized at 8 kHz sampling frequency with the constructed filter having two formant frequencies (bandwidths) of 257 Hz (32 Hz) and 1891 Hz (100 Hz) and one antiformant of 1223 Hz (52 Hz) [25]. N is set to 240 (30 ms), e=1 and c=d=f=10−6 are used for all the experiments. The power ratio of the block sparse excitation e and Gaussian component m is set to 30 dB, and the pitch is set to 200 Hz. The K and L are set to 5 for the pole-zero modeling methods (i.e., VEM-PZ and TS-LS-PZ), but K=10 is used for the all-pole modeling methods (i.e., 2-norm LP, 1-norm LP and EM-LP). In Fig. 1, the means of the residuals of EM-LP and VEM-PZ are plotted. Note that the residuals of the TS-LS-PZ, 1-norm LP and EM-LP are prepended with zeros due to the covariance-based estimation methods. As can be seen in Fig. 1, the residual estimate of the proposed VEM-PZ with D=8 is closest to the true block sparse excitation. Moreover, when D=1, the residuals of the VEM-PZ are the sparsest as expected. Although the EM-LP also produces block sparse residuals compared with the 1-norm LP, the proposed method achieves the best approximation to the true one due to the usage of the pole-zero modeling and the block-sparse motivated SBL method. The corresponding spectral estimates are shown in Fig. 2. First, as can be seen, the VEM-PZ with D=1 has a smooth power spectrum due to the sparse residuals in Fig. 1. Second, the 1-norm LP tends to produce a better estimate of the formants than the 2-norm LP and TS-LS-PZ. Third, although the EM-LP has two peaks around the first formant, it performs well for second formant estimation. Finally, the proposed VEM-PZ with D=8 has good performance for both formant, antiformant and bandwidth estimates because of the block sparse excitation and the pole-zero model.

Second, the spectral distortion is tested under different fundamental frequencies and block sizes. The measure is defined as the truncated power cepstral distance [26], i.e.,

where cn and ^cn are the true and estimated power cepstral coefficients, respectively. Cepstral coefficients are computed by first reflecting all the poles and zeros to the inside of the unit circle and then using the recursive relation in [25]. In our experiments, we set S=300. The fundamental frequency rises from 200 to 400 Hz in steps of 50 Hz. The experimental results in TABLE LABEL:tab:sd_table1 are obtained by the ensemble averages over 500 Monte Carlo experiments. D=6 is used for the EM-LP [12]. As can be seen from TABLE LABEL:tab:sd_table1, the 2-norm LP has a lower spectral distortion than the 1-norm LP, EM-LP and TS-LS-PZ (except for 300 and 350 Hz). The proposed VEM-PZ achieves the lowest spectral distortion for 200, 300, 350 and 400 Hz. However, note that the good performance of the VEM-PZ depends on a good choice of the block sizes for different fundamental frequencies, and there is a fluctuation when the frequency changes. This is because the length of correlated samples changes with the fundamental frequency. But, as can be seen from Fig. 2 and from our experience, the VEM-PZ usually produces better formant, antiformant and bandwidth estimates than traditional ones.

We examine the residuals and spectral estimate of the VEM-PZ for a nasal consonant /n/ in the word ”manage” from the CMU Arctic database [27, 28], pronounced by an US female native speaker, sampled of 8000 Hz. The results are shown in Fig. 3 and Fig. 4. To improve the modeling flexibility, the K and L are set to 10 for the PZ methods (i.e., VEM-PZ and TS-LS-PZ), but K=10 is still used for the all-pole methods (i.e., 2-norm LP, 1-norm LP and EM-LP). As can be seen from Fig. 3, the residuals of the EM-LP and 1-norm LP are sparser than the 2-norm LP. The residuals of the proposed VEM-PZ with D=1 are the sparsest. The proposed VEM-PZ with D=8 is block sparse and is sparser than the TS-LS-PZ. From Fig. 4, we can see that all the algorithms have formant estimates around 150 Hz. However, the TS-LS-PZ, 1-norm LP and VEM-PZ with D=1 have very peaky behaviour. Also, the 2-norm LP produces bad bandwidth estimates around 2000 and 2900 Hz. Furthermore, compared to the EM-LP, the proposed VEM-PZ with D=8 has good antiformant estimates around 500 and 1500 Hz.

A variational expectation maximization pole-zero speech analysis method has been proposed. By using the pole-zero model, it can fit the spectral zeros of speech signals easily. Moreover, block sparse residuals are encouraged by applying the sparse Bayesian learning method. By iteratively updating parameters and statistics of residuals and hyperparameters, block sparse residuals can be obtained. The good performance has been verified by both synthetic and real speech experiments. The proposed method is promising for speech analysis applications. Next, further research into the formant, antiformant and bandwidth estimation accuracy, stability, and unknown sparse pattern should be conducted.