A variant of Schur's product theorem and its applications

We show the following version of the Schur's product theorem. If M=(M_j,k)_j,k=1^n∈R^n× n is a positive semidefinite matrix with all entries on the diagonal equal to one, then the matrix N=(N_j,k)_j,k=1^n with the entries N_j,k=M_j,k^2-1/n is positive semidefinite. As a corollary of this result, we prove the conjecture of E. Novak on intractability of numerical integration on a space of trigonometric polynomials of degree at most one in each variable. Finally, we discuss also some consequences for Bochner's theorem, covariance matrices of χ^2-variables, and mean absolute values of trigonometric polynomials. 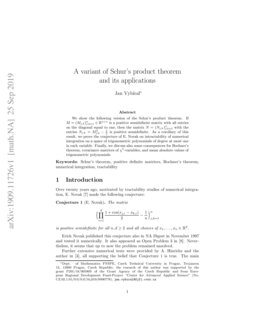 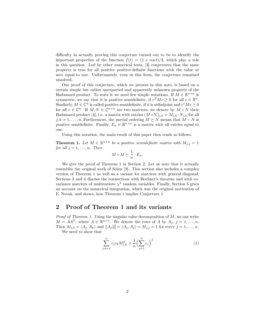 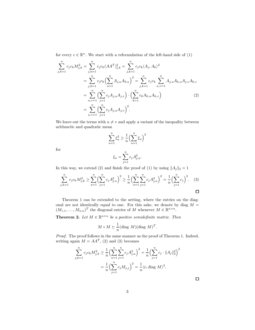 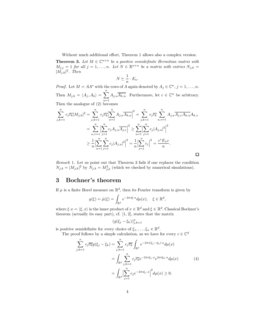 Matrix pencils with coefficients that have positive semidefinite Hermitian part

We analyze when an arbitrary matrix pencil is equivalent to a dissipativ...
Christian Mehl, et al. ∙

Calculating a function of a matrix with a real spectrum

Let T be a square matrix with a real spectrum, and let f be an analytic ...
P. Kubelík, et al. ∙

On polyhedral approximations of the positive semidefinite cone

Over twenty years ago, motivated by tractability studies of numerical integration, E. Novak [7] made the following conjecture:

is positive semidefinite for all n,d≥2 and all choices of x1,…,xn∈Rd.

Erich Novak published this conjecture also in NA Digest in November 1997 and tested it numerically. It also appeared as Open Problem 3 in [8]. Nevertheless, it seems that up to now the problem remained unsolved.

Further extensive numerical tests were provided by A. Hinrichs and the author in [3], all supporting the belief that Conjecture 1 is true. The main difficulty in actually proving this conjecture turned out to be to identify the important properties of the function f(t)=(1+cost)/2, which play a role in this question. Led by other numerical tests, [3] conjectures that the same property is true for all positive positive-definite functions with the value at zero equal to one. Unfortunately, even in this form, the conjecture remained unsolved.

Our proof of this conjecture, which we present in this note, is based on a certain simple but rather unexpected and apparently unknown property of the Hadamard product. To state it we need few simple notations. If M∈Rn×n is symmetric, we say that it is positive semidefinite, if cTMc≥0 for all c∈Rn. Similarly, M∈Cn is called positive semidefinite, if it is selfadjoint and c∗Mc≥0 for all c∈Cn. If M,N∈Cn×n are two matrices, we denote by M∘N their Hadamard product [4], i.e. a matrix with entries (M∘N)j,k=Mj,k⋅Nj,k for all j,k=1,…,n. Furthermore, the partial ordering M⪰N means that M−N is positive semidefinite. Finally, En∈Rn×n is a matrix with all entries equal to one.

Using this notation, the main result of this paper then reads as follows.

We give the proof of Theorem 1 in Section 2. Let us note that it actually resembles the original work of Schur [9]. This section also includes a complex version of Theorem 1 as well as a variant for matrices with general diagonal. Sections 3 and 4 discuss the connections with Bochner’s theorem and with covariance matrices of multivariate χ2random variables. Finally, Section 5 gives an account on the numerical integration, which was the original motivation of E. Novak, and shows, how Theorem 1 implies Conjecture 1.

2 Proof of Theorem 1 and its variants

Using the singular value decomposition of

We need to show that

for every c∈Rn. We start with a reformulation of the left-hand side of (1)

Theorem 1 can be extended to the setting, where the entries on the diagonal are not identically equal to one. For this sake, we denote by diag M=(M1,1,…,Mn,n)T the diagonal entries of M whenever M∈Rn×n.

Let M∈Rn×n be a positive semidefinite matrix. Then

The proof follows in the same manner as the proof of Theorem 1. Indeed, writing again M=AAT, (2) and (3) becomes

Without much additional effort, Theorem 1 allows also a complex version.

Let us point out that Theorem 3 fails if one replaces the condition Nj,k=|Mj,k|2 by Nj,k=M2j,k (which we checked by numerical simulations).

If μ is a finite Borel measure on Rd

, then its Fourier transform is given by

where ξ⋅x=⟨ξ,x⟩ is the inner product of x∈Rd and ξ∈Rd. Classical Bochner’s theorem (actually its easy part), cf. [1, 2], states that the matrix

is positive semidefinite for every choice of ξ1,…,ξn∈Rd.

The proof follows by a simple calculation, as we have for every c∈Cd

We refer to [10] for a classical overview of positive definite functions. Theorem 1 leads to the following modification of one part of Bochner’s Theorem.

Let μ be a finite Borel measure on Rd and let g be its Fourier transform. Then

Theorem 4 can be generalized to other locally compact abelian groups by just applying the corresponding version of Bochner’s theorem. In this way, one can prove for example the following version for torus T, cf. Conjecture 3 in [3].

Theorem 4 allows an interesting reformulation in a language of independent random variables.

be a Borel probability measure on

be two independent random vectors, both distributed with respect to

We denote again by g the Fourier transform of μ. The proof follows from Theorem 4 and the following direct calculation

-distributions (with one degree of freedom). Let

M∈Rn×n be a positive semidefinite matrix with ones on the diagonal and let X1,…,Xn

be Gaussian random variables with zero mean, unit variance and

Thus we have proven

Let X=(X1,…,Xn) be a vector of standard normal variables. Then

In this section, we summarize the approach of [7], where E. Novak studied, how well the quadrature formulas

approximate the integral INTd(f)=∫[0,1]df(x)dx. Here f belongs to a unit ball of a Hilbert space Fd, which is defined as a d

-fold tensor product of a space

F1, which in turn is a three dimensional Hilbert space with an orthonormal basis given by the functions

Hence Fd is a 3d-dimensional Hilbert space. The point evaluation δx:f→f(x) may be written in the form

In this way, Fd becomes a reproducing kernel Hilbert space with the kernel

If all cj’s are positive, we can use the positivity of Kd and obtain

For the optimal choice cj=2−d this becomes

This estimate shows the intractability of numerical integration on

Fd with quadrature formulas with positive weights since for a fixed error the number n of sample points needs to grow exponentially with the dimension d.

To estimate ewor(Qn)2 from below for quadrature rules with general weights c, we use the fact that the projection of any y∈Fd onto the ray generated by x∈Fd is given by ⟨y,x⟩Fdx⟨x,x⟩Fd and its norm is equal to |⟨y,x⟩Fd|∥x∥Fd. In this way we obtain

Erich Novak conjectured, that the estimate (8) applies also for quadrature formulas (7) with general weights, which is by (9) equivalent to Conjecture 1.

Finally, let us show how Theorem 1 implies the positive answer to Conjecture 1. We define matrices M1,…,Md by

By Bochner’s theorem, the matrices Mi are all positive semidefinite and so is their Hadamard product M=M1∘⋯∘Md. Obviously, M has all its diagonal elements equal to one. Finally, Theorem 1 shows that the matrix M∘M−1nEn with entries

Hence, the integration problem on Fd is intractable even when we allow negative weights cj’s in the quadrature formula (7).

Theorem 1 opens an interesting and (most likely) largely unexplored area of research of the partial matrix ordering given by ⪰. For example, the classical calculation (4

In general, one may try to prove other non-trivial bounds for the infimum of other classes of matrices.

Other interesting questions in connection with Theorem 1 include

Acknowledgement: The author would like to than Aicke Hinrichs (JKU Linz) and Erich Novak (FSU Jena) for fruitful discussions.