A useful variant of Wilks' theorem for grouped data 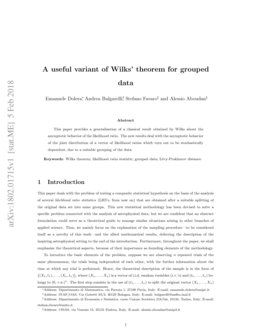 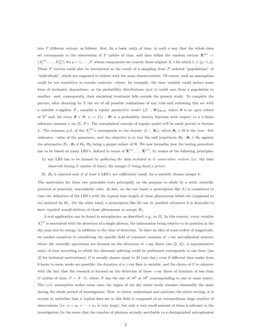 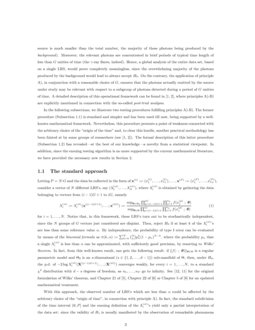 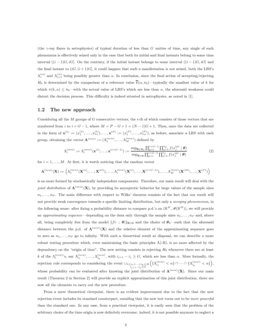 In this paper, we study the maximum likelihood estimate of the probabili...
Sina Molavipour, et al. ∙

On an Asymptotic Distribution for the MLE

The paper presents a novel asymptotic distribution for a mle when the lo...
Stephen G. Walker, et al. ∙

Asymptotic accuracy of the saddlepoint approximation for maximum likelihood estimation

The proportional hazards model has been extensively used in many fields ...
Xianyang Zhang, et al. ∙

The upper limit on the coverage probability of the empirical likelihood ...
Guangxing Wang, et al. ∙

Consider n independent measurements of the same physical phenomenon, with the additional information of the times at which measurements are performed. This paper deals with the problem of testing statistical hypotheses when n is large and only a small amount of observations concentrated in short time intervals (critical phenomena) are relevant to the study under investigation. The sample consists of {(X1,t1),…,(Xn,tn)}, where (X1,…,Xn)

are independent and identically distributed (iid) random variables, and

(t1,…,tn)∈(0,+∞)n. We make use of (t1,…,tn) to split (X1,…,Xn) into P vectors, as follows: fix a basic unit of time in such a way that the whole dataset corresponds to the observation of P units of time, and define the random vector X(p):=(X(p)1,…,X(p)np), for p=1,…,P, whose np components are the Xi’s such that ti∈(p−1,p]. For instance, for a phenomenon with measurements at every minute for multiple years, P may be the number of hours in a year. To complete the picture, let X be the set of all possible realizations of any trial, endowed with the σ-algebra X

, and consider a regular parametric model

is a probability density function with respect to a

σ-finite reference measure ν on (X,X). The notion for regular parametric models will be made precise in Section 2. The common probability density function of the X(p)j’s is denoted by f(⋅;θ0), where θ0∈Θ is the true, but unknown, value of the parameter θ

. The objective of our study is to test the null hypothesis

H0:θ0∈Θ0 against the alternative hypothesis H1:θ0∉Θ0, where Θ0 denotes a proper subset of Θ.

We define a testing procedure in terms of multiple likelihood ratio (LR) statistics, and in accordance with the following principles: P1) each LR statistic is formed by gathering observations included in G subsequent vectors X(p)’s, i.e. observations Xi’s whose ti’s belong to G subsequent units of time, where G is a suitable time window defined a priori with respect to an arbitrary choice of the “origin of time”; P2) H0 is rejected only if at least k LR statistics are sufficiently small, for a suitable choice of k. The time window G in P1) allows for tuning the LR statistics with respect to what, a priori, is considered to be the typical duration (length of time intervals) of critical phenomena that are supposed to be induced by H1. Then P2) is justified whenever it is desirable to have repeated manifestations of critical phenomena to accept H1. Our testing procedure with multiple LR statistics based on P1) and P2) is motivated by the above premise that, among a large number of observations, only critical phenomena are relevant to the study. Indeed, if relevant observations are concentrated in short time intervals of duration less than G units of time, then the analysis based on a single LR statistic would be meaningless, since the overwhelming majority of observations would always lead to accept H0. On the contrary, the application of P1), in conjunction with a reasonable choice of the time window G, ensures that observations may be relevant with respect to a subgroup of observations detected during a period of G units of time.

for i=1,…,N. Note that, in this framework, the components Λ(st)i(X((i−1)G+1);…;X(iG)) of Λ(st) turn out to be stochastically independent, since the N groups of G vectors just considered are disjoint. Then, reject H0 if at least k of the Λ(st)i’s are less than some reference value α

. Due to independence, the probability of type I error can be evaluated by means of the binomial formula as

π(k,α):=∑k≤h≤N(Nh)phα(1−pα)N−h, where the probability pα that a single Λ(st)i is less than α can be approximated, with sufficiently good precision, by resorting to Wilks’ theorem. In fact, from this theorem one has: if {f(⋅;θ);θ∈Θ} is a regular parametric model and Θ0 is an s-dimensional (s∈{1,2,…,d−1}) sub-manifold of Θ, then, under H0

, the probability distribution function of

While the above testing procedure is simple and supported by Wilks’ theorem, the number of LR statistics less than α may be affected by the arbitrary choice of the “origin of time”, in connection with P1). Indeed since H1 is supported by critical phenomena of duration less than G units of time, each of these phenomena is completely seized in a LR statistic only if both its initial time and the final time belong to the interval ((i−1)G,iG]. On the contrary, if the initial time of a critical phenomena belongs to ((i−1)G,iG] and the final time belongs to (iG,(i+1)G], such a phenomena is not seized, or it is partially seized, with both the LR statistic Λ(st)i and the LR statistic Λ(st)i+1 being possibly greater than α. The application of Wilk’s theorem thus implies a specific choice for the “origin of time”, unless one neglects observations belonging to units of time in between time windows. Clearly, this may affect remarkably the decision process. In this paper we propose an alternative testing procedure which overcomes the problem of the arbitrary choice of the “origin of time”, while fulfilling principles P1) and P2). According to our procedure, for any choice of the time window G it is no longer possible to neglect a critical phenomena (of duration less than G units of time) starting at the time interval ((i−1)G,iG] and ending at the time interval (iG,(i+1)G]. Indeed there will always exist another time interval, in a new finer subdivision, which contains both the initial and the final time instants of the critical phenomena. The proposed approach relies on a novel Wilks’ theorem for grouped data, which leads to a rejection event that includes the corresponding rejection event based on Wilks’ theorem. That is, our testing procedure is more powerful than the above Wilks’ testing procedure.

for i=1,…,M. Differently from Λ(st), the components Λ(new)i(X(i);…;X(i+G−1))’s of Λ(new) are no more independent. Therefore, our testing procedure will deal with the joint probability distribution of Λ(new)(X), and in particular with its asymptotic behaviour for large values of the sample sizes n1,…,nP. Our result will not provide weak convergence of Λ(new) towards a specific limiting distribution, but only a merging phenomenon, in the following sense: after fixing a distance to compare probability distributions on (RM,B(RM)), we will provide an approximating sequence such that the distance between the probability distribution of Λ(new)(X) and the relative element of the approximating sequence goes to zero as n1,…,nP go to infinity. The approximating sequence depends on the data only through the sample sizes n1,…,nP, and it does not depend on the model {f(⋅;θ);θ∈Θ} and of the choice of θ0. With such a theoretical result at disposal, we can describe a testing procedure which overcomes the problem of the arbitrary choice of the “origin of time” while fulfilling principles P1) and P2). Such a procedure consists of rejecting H0 whenever there are at least k of the Λ(new)i’s, say Λ(new)i1,…,Λ(new)ik, with ij+1−ij≥G, which are less than α. Formally, the rejection rule corresponds to considering the event

Before stating Theorem 2, it is worth recalling that the parametric model {f(⋅;θ);θ∈Θ} is called regular when the following conditions are met:

In addition, in order to avoid technical—but not conceptual—complications in the proofs, we require a maximum likelihood estimator (MLE) actually exists as a point of

Θ, meaning that such a MLE must coincide with a root of the likelihood equation. More formally, we assume that

To formalize the concept of approximating sequence, we must introduce a suitable distance to compare probability distributions on (Rl,B(Rl)). See, e.g., Gibbs and Su (2002) or Chapter 2 of Senatov (1998) for a comprehensive treatment of distances for probability distributions. Among the various possible distances, we select the Lévy-Prokhorov distance Dl, which is particularly meaningful with respect to our problem. Specifically, given a pair (μ1,μ2) of probability measures on (Rl,B(Rl)),

where Bε:={x∈Rl | d(x,C)≤ε}. The distance Dl is often used in the context of multidimensional extensions of the Berry-Esseen estimate, being related to the concept of weak convergence of probability measures (see, e.g., Section 11.3 of Dudley (2002)).

Let θ0 be the true, but unknown, value of θ∈Θ, and let the conditions of regularity C1)-C7) for the parametric model {f(⋅;θ);θ∈Θ} be satisfied. Then, the probability distribution μ(dM)n1,…,nP of

It is worth noticing that ρi,i=1 for i=1,…,M, and that the matrix RM is positive-definite, as it coincides with the covariance matrix of the Gaussian random vector (W1,…,WM) where Wi:=∑i+G−1j=iEj and (E1,…,EP) is a vector of independent real random variables with Ej∼N(0,nj).

As a consequence of Theorem 1, we can state the main result of the paper.

From a theoretical perspective, there is a clear improvement in using the new testing procedure based on Theorem (2) rather then the standard testing procedure based on Wilk’s theorem. This is because of the fact that the new rejection event includes its standard counterpart, entailing that the new testing proceure turns out to be more powerful than the standard testing procedure. Moreover, the problem of the arbitrary choice of the “origin of time” is now definitely solved. Indeed it is not possible anymore to neglect a critical phenomena (of duration less than G units of time) starting at the time interval ((i−1)G,iG] and ending at the time interval (iG,(i+1)G], for any choice of G.

We considered testing hypotheses under this setting: a large number of independent measurements of which only a small amount, concentrated in short periods, are relevant to the study under investigation. Our motivating example comes from recent works on detection of γ-ray astrophysical sources under the AGILE project (http://agile.asdc.asi.it). See, e.g., Bulgarelli et al. (2012) and Bulgarelli et al. (2014). The Xi’s are associated to measurements of photons, with the information being the position of the photon in the sky and its energy. The basic unit of time is the hour, and the iid assumption is motivated by the fact that the region of the sky under investigation is invariant for the duration of the AGILE project (5 years). The dataset consists of a huge number of observations, but only a small amount of them, concentrated in periods of less than 24 hours, are relevant. Indeed the number of photons ascribable to distinguish astrophysical sources (e.g., supernova remnants, black hole binaries and pulsar wind nebulae) is much smaller than the total number of observed photons. Bulgarelli et al. (2012) relied on the statistic (1), with G=24, for testing certain hypotheses related to the detection of γ-ray astrophysical sources. In this paper we discussed how (1), with an arbitrary choice of the “origin of time”, may lead to a meaningless analysis. We then introduced an alternative, and more powerful, test that allows for an arbitrary choice of the “origin of time”. Such a procedure relies on the novel Wilks’ theorem for grouped data, which may be of independent interest. Since a precise formulation of the problem in Bulgarelli et al. (2012) would require to introduce certain (technical) protocols of the AGILE project, we defer the application of our approach to a companion paper for a journal in astrophysics.

The proofs of the main theorems are based on the following three lemmas.