A Unique Extension of Rich Words 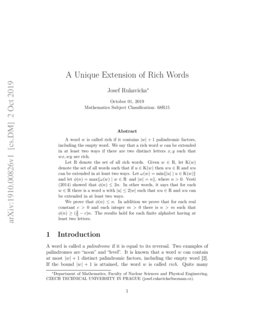 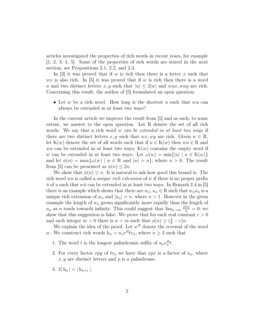 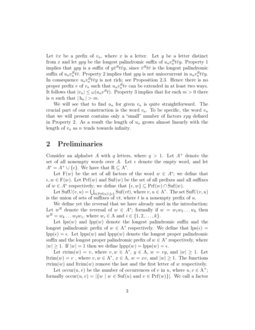 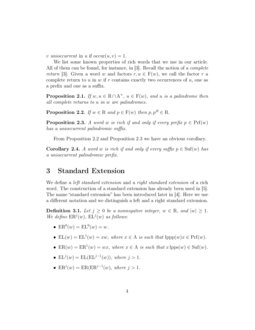 A word is called a palindrome if it is equal to its reversal. Two examples of palindromes are “noon” and “level”. It is known that a word w can contain at most |w|+1 distinct palindromic factors, including the empty word [DrJuPi]. If the bound |w|+1 is attained, the word w is called rich. Quite many articles investigated the properties of rich words in recent years, for example [BuLuGlZa2, DrJuPi, GlJuWiZa, RukavickaRichWords2019, Vesti2014]. Some of the properties of rich words are stated in the next section; see Propositions 2.1, 2.2, and 2.3.

We show that ϕ(n)≤n. It is natural to ask how good this bound is. The rich word wu is called a unique rich extension of w if there is no proper prefix ¯u of u such that w¯u can be extended in at least two ways. In Remark 2.4 in [Vesti2014] there is an example which shows that there are wn,un∈R such that wnun is a unique rich extension of wn and |un|=n, where n>1. However in the given example the length of wn grows significantly more rapidly than the length of un as n tends towards infinity. This could suggest that limn→∞ϕ(n)n=0; we show that this suggestion is false. We prove that for each real constant c>0 and each integer m>0 there is n>m such that ϕ(n)≥(29−c)n.

We explain the idea of the proof. Let wR denote the reversal of the word w. We construct rich words hn=unvRtvn, where n≥3 such that

Let ¯vx be a prefix of vn, where x is a letter. Let y be a letter distinct from x and let ypy be the longest palindromic suffix of unvRnt¯vy. Property 1 implies that ypy is a suffix of y¯vRt¯vy, since ¯vRt¯v is the longest palindromic suffix of unvRnt¯v. Property 2 implies that ypy is not unioccurrent in unvRnt¯vy. In consequence unvRnt¯vy is not rich; see Proposition 2.3. Hence there is no proper prefix v of vn such that unvRntv can be extended in at least two ways. It follows that |vn|≤ω(unvRt). Property 3 implies that for each m>0 there is n such that |hn|>m.

We will see that to find un for given vn is quite straightforward. The crucial part of our construction is the word vn. To be specific, the word vn that we will present contains only a “small” number of factors xpy defined in Property 2. As a result the length of un grows almost linearly with the length of vn as n tends towards infinity.

Consider an alphabet A with q letters, where q>1. Let A+ denote the set of all nonempty words over A. Let ϵ denote the empty word, and let A∗=A+∪{ϵ}. We have that R⊆A∗.

We define yet the reversal that we have already used in the introduction: Let wR denote the reversal of w∈A∗; formally if w=w1w2…wk then wR=wk…w2w1, where wi∈A and i∈{1,2,…,k}.

We list some known properties of rich words that we use in our article. All of them can be found, for instance, in [GlJuWiZa]. Recall the notion of a complete return [GlJuWiZa]: Given a word w and factors r,u∈F(w), we call the factor r a complete return to u in w if r contains exactly two occurrences of u, one as a prefix and one as a suffix.

If w,u∈R∩A+, u∈F(w), and u is a palindrome then all complete returns to u in w are palindromes.

A word w is rich if and only if every prefix p∈Prf(w) has a unioccurrent palindromic suffix.

A word w is rich if and only if every suffix p∈Suf(w) has a unioccurrent palindromic prefix.

A left and a right standard extension of a rich word w is rich. In consequence, every rich word w can be extended to rich words wx,yw for some letters x,y; this has already been proved in [GlJuWiZa, RukavickaRichWords2019, Vesti2014].

We formally define a unique rich extension mentioned in the introduction. In addition we define a flexed point of a rich word.

then we call u a unique rich extension of v.

Note that if x∈A and ux is a flexed point of a rich word v then u can be extended in at least two ways. A similar notion of a “flexed palindrome” has been used in [RukavickaRichWords2019].

There is a connection between a unique rich extension and a right standard extension.

If u is a unique rich extension of w then u∈ERa(w).

Suppose there is ¯ux∈Prf(u) such that ¯u∈ERa(w), x∈A, and ¯ux∉ERa(w). Then obviously ¯u can be extended in at least two ways, since both ¯ux and ER(¯u) are rich. Hence u cannot be a unique rich extension of w. The lemma follows. ∎

We show that if wu is unique rich extension of w, then lpps(w) is unioccurrent in lpps(w)u.

The proposition follows from the proof of Theorem 2.1 in [Vesti2014]. The author shows that a rich word w can be extended into a rich word w¯w in such a way that an is a suffix of w¯w, where an is the largest power of some letter a∈A. It is proved that w¯w can be extended in at least two ways. In both cases distinguished in the proof of Theorem 2.1 in [Vesti2014] it is easy to see that occur(lpps(w)¯w,lpps(w))=1. The proposition follows. ∎

We present two simple properties of a unique rich extension.

The next proposition discusses words of the form v¯vux, where v¯vux is unique rich extension of v¯v, x is a letter, ¯v is the longest proper palindromic suffix of v¯v, and ¯vux is a flexed point of ¯vux. The proposition asserts that there are words t1,t2 such that v=t1t2, xuR is a proper suffix of t2, and ¯vtR2 is a flexed point of ¯vtR2. In particular it implies that |v|>|ux|.

We step to the main result of this section. The theorem says that if v¯vu is a unique rich extension of v¯v and ¯v is the longest proper palindromic suffix of v¯v then u is not longer than v¯v.

The simple corollary is that if wu is a unique rich extension of w then u is not longer than w.

5 Construction of a Uniquely Extensible Rich Word I

We call rdc(S) a reduction of S.

Suppose xpy is a switch, let spc(xpy)=xpx, where x,y∈A. We call spc(xpy) a switch palindromic closure of the switch xpy. If B⊂A+ is a set of switches then we define spc(B)=rdc(⋃w∈B{spc(w)}).

Note that if xpy is a switch, then p can be the empty word.

The set swSuf(v,u) is a set of switches that are suffixes of v¯u for all nonempty prefixes ¯u of u.

The reduction rdc(S) of the set S is a subset of S and contains only elements that are not proper factors of other elements of S.

The following proposition clarifies the importance of switches for a unique rich extension of rich words. The proposition says that if

It follows that the longest palindromic suffix t is not unioccurrent, hence wuR¯v¯uy is not rich; see Proposition 2.3. This completes the proof. ∎

Given a factor u of a word w, for us it will not be important if u or uR is unioccurrent in w. For this purpose we define a special notion.

The notion of reverse-unioccurrence has also been used in [RukavickaRichWords2019].

We show that if the switch ytx is a suffix of the word wx and ytx is reverse-unioccurrent in wx then wx is a flexed point of wx.

There is an obvious corollary of Lemma 5.7 saying that if t is a switch of w, then there is a flexed point v of w such that either t or tR is a suffix of v.

In order to construct a word with a prefix containing all switch palindromic closures of its switches we introduce two functions ewp and elpp.

If w,t∈R∩A+ and t is a palindrome then we define

In addition we define

where w is a nonempty rich word and t1,t2,…,tm are rich nonempty palindromes.

The notation “ewp” stands for “extension with prefix”. It is clear that (πw,t)Rw is a left standard extension of w that has as a prefix ltrim(t).

The notation “elpp” stands for “extension with letter power prefix”. The function elppy(w) is the word yu where u is a left standard extension of w such that ymaxPow(w,y) is a prefix. If maxPow(w,y)=0 then elppy(w)=yw.

We prove that ewp(w,t),elppy(w)∈R are rich words.