In this paper we propose and analyze a uniformly robust staggered DG method for the unsteady Darcy-Forchheimer-Brinkman problem. Our formulation is based on velocity gradient-velocity-pressure and the resulting scheme can be flexibly applied to fairly general polygonal meshes. We relax the tangential continuity for velocity, which is the key ingredient in achieving the uniform robustness. We present well-posedness and error analysis for both the semi-discrete scheme and the fully discrete scheme, and the theories indicate that the error estimates for velocity are independent of pressure. Several numerical experiments are presented to confirm the theoretical findings. 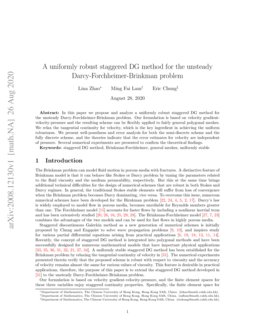 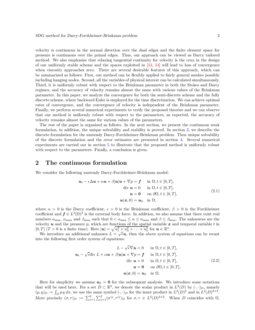 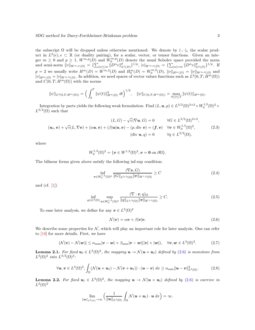 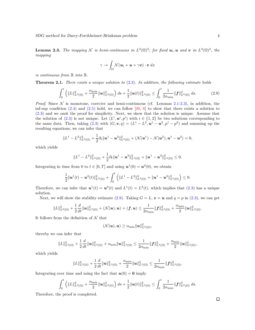 The Brinkman problem can model fluid motion in porous media with fractures. A distinctive feature of Brinkman model is that it can behave like Stokes or Darcy problem by tuning the parameters related to the fluid viscosity and the medium permeability, respectively. But this at the same time brings additional technical difficulties for the design of numerical schemes that are robust in both Stokes and Darcy regimes. In general, the traditional Stokes stable elements will suffer from loss of convergence when the Brinkman problem becomes Darcy dominating, vice versa. To overcome this issue, numerous numerical schemes have been developed for the Birnkman problem [22, 24, 4, 5, 2, 17]. Darcy’s law is widely employed to model flow in porous media, becomes unreliable for Reynolds numbers greater than one. The Forchheimer model [15] accounts for faster flows by including a nonlinear inertial term and has been extensively studied [20, 26, 16, 25, 29, 28]. The Brinkman-Forchheimer model [27, 7, 23] combines the advantages of the two models and can be used for fast flows in highly porous media.

Staggered discontinuous Galerkin method as a new generation of numerical schemes is initially proposed by Chung and Engquist to solve wave propagation problems [9, 10]

[8, 19, 18, 12, 11, 14]. Recently, the concept of staggered DG method is integrated into polygonal methods and have been successfully designed for numerous mathematical models that have important physical applications [33, 35, 36, 31, 32, 21, 37, 34]. A uniformly stable staggered DG method has been established for the Brinkman problem by relaxing the tangential continuity of velocity in [31]. The numerical experiments presented therein verify that the proposed scheme is robust with respect to viscosity and the accuracy of velocity remains almost the same for various values of viscosity. This feature is desirable in practical applications, therefore, the purpose of this paper is to extend the staggered DG method developed in [31] to the unsteady Darcy-Forchheimer-Brinkman problem.

Our formulation is based on velocity gradient-velocity-pressure, and the finite element spaces for these three variables enjoy staggered continuity properties. Specifically, the finite element space for velocity is continuous in the normal direction over the dual edges and the finite element space for pressure is continuous over the primal edges. Thus, our approach can be viewed as Darcy tailored method. We also emphasize that relaxing tangential continuity for velocity is the crux in the design of our uniformly stable scheme and the spaces exploited in [33, 34] will lead to loss of convergence when viscosity approaches zero. There are several desirable features of this approach, which can be summarized as follows: First, our method can be flexibly applied to fairly general meshes possibly including hanging nodes. Second, all the variables of physical interest can be calculated simultaneously. Third, it is uniformly robust with respect to the Brinkman parameter in both the Stokes and Darcy regimes, and the accuracy of velocity remains almost the same with various values of the Brinkman parameter. In this paper, we analyze the convergence for both the semi-discrete scheme and the fully discrete scheme, where backward Euler is employed for the time discretization. We can achieve optimal rates of convergence, and the convergence of velocity is independent of the Brinkman parameter. Finally, we perform several numerical experiments to verify the proposed theories and we can observe that our method is uniformly robust with respect to the parameters, as expected, the accuracy of velocity remains almost the same for various values of the parameters.

The rest of the paper is organized as follows. In the next section, we present the continuous weak formulation, in addition, the unique solvability and stability is proved. In section 3, we describe the discrete formulation for the unsteady Darcy-Forchheimer-Brinkman problem. Then unique solvability of the discrete formulation and the error estimates are presented in section 4. Several numerical experiments are carried out in section 5 to illustrate that the proposed method is uniformly robust with respect to the parameters. Finally, a conclusion is given.

where α>0 is the Darcy coefficient, ϵ>0 is the Brinkman coefficient, β>0 is the Forchheimer coefficient and f∈L2(Ω)2 is the external body force. In addition, we also assume that there exist real numbers αmin, αmax and βmax such that 0<αmin≤α≤αmax and β≤βmax. The unknowns are the velocity u and the pressure p, which are functions of the spatial variable x and temporal variable t in [0,T] (T>0 is a finite time). Here |u|=√u21+u22+⋯+u2n for u∈Rn.

(or duality pairing), for a scalar, vector, or tensor functions. Given an integer

The bilinear forms given above satisfy the following inf-sup condition:

To ease later analysis, we define for any v∈L3(Ω)2

We describe some properties for N, which will play an important role for later analysis. One can refer to [16] for more details. First, we have

is continuous from R into R.

There exists a unique solution to (2.3). In addition, the following estimate holds

It follows from the definition of N that

thereby we can infer that

Therefore, the proof is completed.

In this section, we introduce the discrete formulation for the unsteady Darcy-Forchheimer-Brinkman problem (2.1). To this end, we first introduce the construction of our staggered DG spaces, in line with this we then present the construction of staggered DG method. To begin, we construct three meshes: the primal mesh Tu, the dual mesh Td, and the primal simplicial submeshes Th. For a polygonal domain Ω, consider a general mesh Tu (of Ω) that consists of nonempty connected close disjoint subsets of Ω:

We let Fu be the set of all primal edges in this partition and F0u be the subset of all interior edges, that is, the set of edges in Fu that do not lie on ∂Ω. We construct the primal submeshes Th as a triangular subgrid of the primal grid: for an element E∈Tu, elements of Th are obtained by connecting the interior point ν to all vertices of Tu (see Figure 1). We use Fp to denote the set of all the dual edges generated by this subdivision process. For each triangle τ∈Th, we let hτ be the diameter of τ, he be the length of edge e⊂∂τ, and h=max{hτ,τ∈Th}. In addition, we define F:=Fu∪Fp and F0:=F0u∪Fp. We rename the primal element by S(ν), which is assumed to be star-shaped with respect to a ball of radius ρBhS(ν), where ρB is a positive constant. In addition, we assume that for every edge e∈∂S(ν), it satisfies he≥ρEhS(ν), where ρE is a positive constant. More discussions about mesh regularity assumptions for general meshes can be referred to [3]. The construction for general meshes is illustrated in Figure 1, where the black solid lines are edges in Fu and the red dotted lines are edges in Fp.

For each edge e, we define a unit normal vector ne as follows: If e∈F∖F0, then ne is the unit normal vector of e pointing towards the outside of Ω. If e∈F0, an interior edge, we then fix ne as one of the two possible unit normal vectors on e. When there is no ambiguity, we use n instead of ne to simplify the notation. In addition, we use t to denote the corresponding unit tangent vector. We also introduce some notations that will be employed throughout this paper. Let k≥0 be the order of approximation. For every τ∈Th and e∈F, we define Pk(τ) and Pk(e) as the spaces of polynomials of degree less than or equal to k on τ and e, respectively. In the following, we use ∇h and divh to denote the element-wise gradient and divergence operators, respectively.

We now define jump terms which will be used throughout the paper. For each triangle τi in Th such that e⊂∂τi, we let ni be the outward unit normal vector on e⊂∂τi. The sign δi of ni with respect to n on e is then given by

For a double-valued scalar quantity ϕ, let ϕi=ϕ∣τi.The jump [ϕ] across an edge e∈F0 can then be defined as:

where τ1 and τ2 are the two triangles sharing the common edge e. For e∈F∖F0, we let [ϕ]=ϕ1. Similarly, for a vector quantity ϕ and a matrix quantity Φ, we let ϕi=ϕ∣τi and Φi=Φ∣τi, then the jumps [ϕ⋅n] and [Φn] across an edge e∈F0 are defined as:

In addition, for e∈F∖F0, we define [ϕ⋅n]=ϕ1⋅n and [Φn]=Φ1n. In the sequel, we use C to denote a positive constant which may have different values at different occurrences.

Now we are ready to introduce the finite dimensional spaces for our staggered DG method by following [31]. We first define the following finite element space for velocity:

In this space, we define

Next, we define the following finite element space for velocity gradient:

Then, we define the following locally H1(Ω)-conforming finite element space for pressure:

which is equipped by

Finally, we define the following space which is employed to enforce the weak continuity of the velocity gradient over the dual edge

Following [31], we can formulate our staggered DG formulation for the unsteady Darcy-Forchheimer-Brinkman problem (2.1): Find (Lh,uh,ˆuh,ph)∈Wh×Uh×ˆUh×Ph such that

where the bilinear forms are defined by

To facilitate the analysis, we define the subspace of Wh by

For later analysis, we state the following inf-sup condition

We remark that the proof of the above inf-sup conditions can follow the techniques employed in [31, 32] and we omit it for simplicity.

) implies the existence of an interpolation operator

By the standard theory for polynomial preserving operators (cf. [13, 10]), we obtain

To facilitate later analysis, we also need to define the following projection operator. Let Ih:H1(Ω)→Ph be defined by

It is easy to see that Ih and Jh are well defined polynomial preserving operators. In addition, the following approximation properties hold for v∈Hk+1(Ω)2 (cf. [13, 10])

Furthermore, the definitions of Ih and Jh imply directly that

There exists a unique solution to (3.4), in addition, the following estimate holds

We can proceed similarly to Theorem 2.1 to infer that there exists a unique solution to (3.4).

Now we show the stability estimate (4.1). Taking v=uh, G=Lh and q=ph in (3.4), and summing up the resulting equations yields

According to the definition of N, we can easily see that

Therefore, the proof is completed.

Replacing Lh,uh,ph by L,u,p in (3.4) yields the following error equations