A Unified Framework of State Evolution for Message-Passing Algorithms

This paper presents a unified framework to understand the dynamics of message-passing algorithms in compressed sensing. State evolution is rigorously analyzed for a general error model that contains the error model of approximate message-passing (AMP), as well as that of orthogonal AMP. As a by-product, AMP is proved to converge asymptotically if the sensing matrix is orthogonally invariant and if the moment sequence of its asymptotic singular-value distribution coincide with that of the Marchenko-Pastur distribution up to the order that is at most twice as large as the maximum number of iterations. 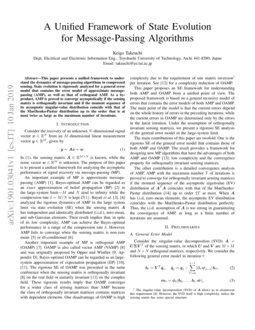 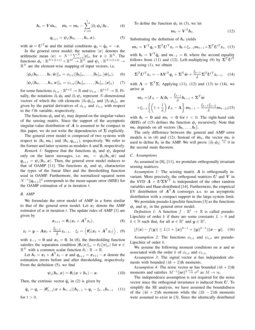 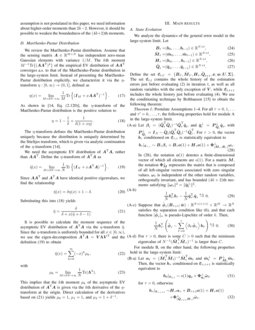 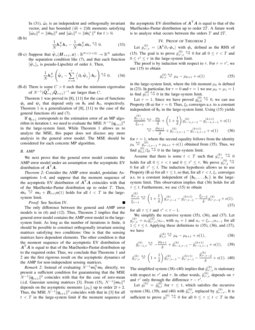 A Unified Model with Structured Output for Fashion Images Classification

A picture is worth a thousand words. Albeit a cliché, for the fashion in...
Beatriz Quintino Ferreira, et al. ∙

Consider the recovery of an unknown N

x∈RN from an M-dimensional linear measurement vector y∈RM, given by

In (1), the sensing matrix A∈RM×N is known, while the noise vector w∈RM is unknown. The purpose of this paper is to present a unified framework for analyzing the asymptotic performance of signal recovery via message-passing (MP).

An important example of MP is approximate message-passing (AMP) [1]. Bayes-optimal AMP can be regarded as an exact approximation of belief propagation [2] in the large-system limit—both M and N tend to infinity while the compression rate δ=M/N is kept O(1). Bayati et al. [3, 4] analyzed the rigorous dynamics of AMP in the large system limit via state evolution (SE) when the sensing matrix A has independent and identically distributed (i.i.d.), zero-mean, and sub-Gaussian elements. Their result implies that, in spite of its low complexity, AMP can achieve the Bayes-optimal performance in a range of the compression rate δ. However, AMP fails to converge when the sensing matrix is non-zero mean [5] or ill-conditioned [6].

Another important example of MP is orthogonal AMP (OAMP) [7]. OAMP is also called vector AMP (VAMP) [8] and was originally proposed by Opper and Winther [9, Appendix D]. Bayes-optimal OAMP can be regarded as an large-system approximation of expectation propagation (EP) [10, 11]. The rigorous SE of OAMP was presented in the same conference when the sensing matrix is orthogonally invariant on the real field [8] or unitarily invariant on the complex field [11]. These rigorous results imply that OAMP converges for a wider class of sensing matrices than AMP because the class of orthogonally invariant matrices contains matrices with dependent elements. One disadvantage of OAMP is high complexity due to the requirement of one matrix inversion111

The singular-value decomposition (SVD) of

A allows us to circumvent this requirement [8]. However, the SVD itself is high complexity, unless the sensing matrix has some special structure. per iteration. See [12] for a complexity reduction of OAMP.

This paper proposes an SE framework for understanding both AMP and OAMP from a unified point of view. The proposed framework is based on a general recursive model of errors that contains the error models of both AMP and OAMP. The main point of the model is that the current errors depend on the whole history of errors in the preceding iterations, while the current errors in OAMP are determined only by the errors in the latest iteration. Under the assumption of orthogonally invariant sensing matrices, we present a rigorous SE analysis of the general error model in the large-system limit.

The main contributions of this paper are twofold: One is the rigorous SE of the general error model that contains those of both AMP and OAMP. The result provides a framework for designing new MP algorithms that have the advantages of both AMP and OAMP [13]: low complexity and the convergence property for orthogonally invariant sensing matrices.

The other contribution is a detailed convergence analysis of AMP. AMP with the maximum number T

Consider the singular-value decomposition (SVD) A=UΣVT of the sensing matrix, in which U and V are M×M and N×N orthogonal matrices, respectively. We consider the following general error model in iteration t:

In the general error model, the notation ⟨v⟩ denotes the arithmetic mean ⟨v⟩=N−1∑Nn=1[v]n for v∈RN. The functions ϕt:RN×(t+1)×RM→RN and ψt:RN×(t+2)→RN are the element-wise mapping of input vectors, i.e.

The functions ϕt and ψt may depend on the singular-values of the sensing matrix. Since the support of the asymptotic singular-value distribution of A is assumed to be compact in this paper, we do not write the dependencies of Σ explicitly.

The general error model is composed of two systems with respect to (bt,mt) and (ht,qt+1), respectively. We refer to the former and latter systems as modules A and B, respectively.

Suppose that the functions ϕt and ψt depend only on the latest variables, i.e. mt=ϕt(bt,~w) and qt+1=ψt(ht,x). Then, the general error model reduces to that of OAMP [11]. The functions ϕt and ψt characterize the types of the linear filter and the thresholding function used in OAMP. Furthermore, the normalized squared norm N−1∥qt+1∥2

We formulate an AMP error model similar to the general error model. Let xt denote the AMP estimator of x in iteration t. The update rules of AMP [1] are given by

with z−1=0 and x0=0. In (8), the thresholding function satisfies the separation condition [θt(v)]n=θt([v]n) for v∈RN with a common scalar function θt:R→R.

Let ht=xt+ATzt−x and qt+1=xt+1−x denote the estimation errors before and after thresholding, respectively. From the definition (5), we find

To define the function ϕt in (3), we let

Substituting the definition of ht yields

The only difference between the general and AMP error models is in (4) and (12). Instead of ~mt, the vector mt is used to define ht in the AMP. We will prove ⟨∂t′ϕt⟩a.s.=0 in the second main theorem.

We follow [3] to postulate Lipschitz-continuous functions as ϕt and ψt in the general error model.

ϕt,n and ψt,n are Lipschitz-continuous. Furthermore, ϕt(b0,…,bt,~w) and ψt(h0,…,ht,x) are not a linear combination of the first t+1 vectors plus some function of the last vector.

We assume the following moment conditions on x and w to guarantee the existence of the second moments of the variables in the general error model.

The signal vector x has independent elements with bounded (4+ϵ)th moments for some ϵ>0.

The sensing matrix A is orthogonally invariant. More precisely, the orthogonal matrices U and V in the SVD A=UΣVT

is independent of the other random variables and Haar-distributed

[14]. The empirical EV distribution of ATA converges almost surely (a.s.) to an asymptotic distribution with a compact support in the large-system limit.

We review the Marc̆henko-Pastur distribution. Assume that the sensing matrix A∈RM×N

As shown in [14, Eq. (2.120)], the η-transform of the Marc̆henko-Pastur distribution is the positive solution to

We need the asymptotic EV distribution of ATA, rather than AAT. Define the η-transform of ATA as

Since AAT and ATA have identical positive eigenvalues, we find the relationship

Substituting this into (17) yields

It is possible to calculate the moment sequence of the asymptotic EV distribution of ATA via the η-transform ~η. Since the η-transform is uniformly bounded for all x∈[0,∞), we use the eigen-decomposition ATA=VΛVT and the definition (18) to obtain

This implies that the kth moment μk of the asymptotic EV distribution of ATA is given via the kth derivative of the η-transform at the origin. Direct calculation of the derivatives based on (20) yields μ0=1, μ1=1, and μ2=1+δ−1.

We analyze the dynamics of the general error model in the large-system limit. Let

Define the set Et,t′={Bt′,~Mt′,Ht,~Qt+1,x,w,U,Σ}. The set Et,t contains the whole history of the estimation errors just before evaluating (2) in iteration t, as well as all random variables with the only exception of V, while Et,t+1 includes the whole history just before evaluating (4). We use the conditioning technique by Bolthausen [15] to obtain the following theorem:

Postulate Assumptions 1–4. For all τ=0,1,… and τ′=0,…,τ, the following properties hold for module A in the large-system limit.

For module B, on the other hand, the following properties hold in the large-system limit:

If qt+1 corresponds to the estimation error of an MP algorithm in iteration t, we need to evaluate the MSE N−1∥qt+1∥2 in the large-system limit. While Theorem 1 allows us to analyze the MSE, this paper does not discuss any more analysis in the general error model. The MSE should be considered for each concrete MP algorithm.

Because of space limitation, we have focused on a performance measure, such as MSE, that requires the existence of the second moments of the variables in the general error model. As considered in [3], it is straightforward to extend Theorem 1 to the case of general performance measures in terms of pseudo-Lipschitz functions.

We next prove that the general error model contains the AMP error model under an assumption on the asymptotic EV distribution of ATA.

Consider the AMP error model, postulate Assumptions 1–4, and suppose that the moment sequence of the asymptotic EV distribution of ATA coincides with that of the Marc̆henko-Pastur distribution up to order T. Then, ~mta.s.=mt+Bt+1o(1) holds for all t<T in the large-system limit.

The only difference between the general and AMP error models is in (4) and (12). Thus, Theorem 2 implies that the general error model contains the AMP error model in the large-system limit. As long as the number of iterations is finite, it should be possible to construct orthogonally invariant sensing matrices satisfying two conditions: One is that the sensing matrices have dependent elements. The other condition is that the moment sequence of the asymptotic EV distribution of ATA is equal to that of the Marc̆henko-Pastur distribution up to the required order. Thus, we conclude that Theorems 1 and 2 are the first rigorous result on the asymptotic dynamics of the AMP for non-independent sensing matrices.

Instead of evaluating N−1mTtmt directly, we present a sufficient condition for guaranteeing that the MSE N−1∥qt+1∥2 coincides with that for the case of zero-mean i.i.d. Gaussian sensing matrices [3]. From (15), N−1∥mt∥2 depends on the asymptotic moments {μk} up to order 2t+2. Thus, the MSE N−1∥qt+1∥2 coincides with that in [3] for all t<T in the large-system limit if the moment sequence of the asymptotic EV distribution of ATA is equal to that of the Marc̆henko-Pastur distribution up to order 2T. A future work is to analyze what occurs between the orders T and 2T.

Let g(k)τ=~g(k)0,τ for τ≤t, which satisfies the recursive system (37), (38), and (39) with ~g(k)τ′,τ replaced by g(k)τ−τ′. It is sufficient to prove g(0)ta.s.→0 in the large-system limit. By definition, g(k)τ is independent of the higher-order moments μj for all j>τ+k+1. As long as t<T is assumed, the sequence {g(0)0,…,g(0)t} is determined by the moments up to order T. Without loss of generality, we can assume that the asymptotic EV distribution of ATA coincides with the Marc̆henko-Pastur distribution perfectly.

Since the η-transform ~η satisfies (20), we have

The positivity of the η-transform implies that the correct solution is ~η(x∗)=1−y. Thus, we arrive at P(−x∗,y)=0.

The author was in part supported by the Grant-in-Aid for Scientific Research (B) (JSPS KAKENHI Grant Number 18H01441), Japan.

We present the definition and basic properties of pseudo-Lipschitz functions [3].

In proving the following propositions, we use the equivalence between norms on Rt for finite t∈R, i.e. C1∥⋅∥q≤∥⋅∥p≤C2∥⋅∥q for some constants C1,C2>0. Note that ∥⋅∥2 is abbreviated as ∥⋅∥.

Let f:Rt→R denote any pseudo-Lipschitz function of order k. Then, there is some constant C>0 such that |f(x)|≤L(1+∥x∥k) for all x∈Rt.

Let x∈Rt denote a random vector with bounded kth absolute moments for some k∈N. Suppose that a function f:Rt→R is pseudo-Lipschitz of order k and almost everywhere (a.e.) differentiable. Then, we have E[|f(x)|]<∞ and E[|∂t′f(x)|]<∞.

where the boundedness follows from that of the kth absolute moments of x.

The boundedness E[∂t′f(x)]<∞ is also obtained by repeating the same argument, since (52) implies

where et′ denotes the t′th column of It. Thus, Proposition 2 holds.

From the pseudo-Lipschitz properties, there are some constants Lf,Lg>0 such that