This paper focuses on the regularization of backward time-fractional diffusion problem on unbounded domain. This problem is well-known to be ill-posed, whence the need of a regularization method in order to recover stable approximate solution. For the problem under consideration, we present a unified framework of regularization which covers some techniques such as Fourier regularization [19], mollification [12] and approximate-inverse [7]. We investigate a regularization technique with two major advantages: the simplicity of computation of the regularized solution and the avoid of truncation of high frequency components (so as to avoid undesirable oscillation on the resulting approximate-solution). Under classical Sobolev-smoothness conditions, we derive order-optimal error estimates between the approximate solution and the exact solution in the case where both the data and the model are only approximately known. In addition, an order-optimal a-posteriori parameter choice rule based on the Morozov principle is given. Finally, via some numerical experiments in two-dimensional space, we illustrate the efficiency of our regularization approach and we numerically confirm the theoretical convergence rates established in the paper. 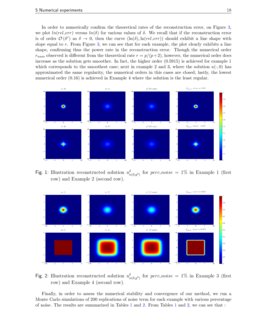 It is well-known that backward parabolic equations in which the initial ...
Nguyen Van Duc, et al. ∙

We aim at the development and analysis of the numerical schemes for appr...
Zhengqi Zhang, et al. ∙

In this paper, we consider the inverse source problem for the time-fract...
Bin Fan, et al. ∙

Regularization of a backwards parabolic equation by fractional operators

The backwards diffusion equation is one of the classical ill-posed inver...
Barbara Kaltenbacher, et al. ∙

In this paper, we study the final value problem

and we derive order-optimal convergence rates between our approximate solution and the exact solution u(⋅,0) under classical Sobolev smoothness condition

We also provide error estimates under the more realistic setting where both the data u(⋅,T) and the forward diffusion operator are only approximately known. The motivation here being that, in practice, the Mittag-Leffler function which plays a major role in the resolution of equation (1) can only be approximated in practice.

The outline of this article is as follows:

Section 4 is devoted to parameter selection rules which is a critical step in the application of a regularization method. Here we propose a Morozov-like a-posteriori parameter choice rule leading to order-optimal convergence rates under smoothness condition (2). We also present analogous error estimates as that obtained in Section 3 corresponding to the a-posteriori rule prescribed.

) denotes the Fourier (resp. inverse Fourier) transform of the function

Let us start by the following result about the existence and uniqueness of solution of equation (1).

Proposition 1 is merely generalization of [yang2015fourier, Lemma 2.2] where only the case n=1 is considered. The idea of the proof is merely to check that the formal solution defined by (5) is the weak solution.

Now, let us define the framework that we will consider for the regularization of problem (1). Consider a data g∈H2(Rn), by applying the Fourier transform in (1) with respect to variable x, we get

By applying the Laplace transform with respect to variable t in (3), one gets

where Eγ,1 is the Mittag Leffler function [podlubnv1999fractional] defined as

From (4), we can deduce the following relation between the solution u(⋅,0) and the data g

in the frequency domain:

Moreover, we can also derive the following relation for early distribution u(⋅,t) with t∈(0,T)

From equations (5) and (6), we can see that the Mittag Leffler function Eγ,1 plays an important role in time-fractional diffusion equation (1). Hence, let us recall some key estimates about the function Eγ,1 that will be repeatedly used in the sequel.

From (10), we see that very small perturbations in high frequencies in the data g leads to arbitrary large errors in the solution u(⋅,0). Therefore, one needs a regularization method to recover stable estimates of u(⋅,0).

Estimate (11) illustrates the fact that the backward time-fractional diffusion equation is less ill-posed (mildly ill-posed) on the contrary to the classical backward diffusion equation which is exponentially ill-posed. This is actually due to the asymptotic slow decay of the Mittag Leffler function Eγ,1(−|ξ|2) compared to exp(−|ξ|2)=E1,1(−|ξ|2).

From (5), we can reformulate equation (1) into an operator equation

In the sequel, given a data g∈L2(Rn), we aim at recovering u(⋅,0)∈L2(Rn). Let φ be a smooth real-valued function in L1(Rn) satisfying ∫Rnφ(x)dx=1. It is well-known that the family of functions (φα)α>0 defined by

where φα⋆f is nothing but the convolution of the functions φα and f defined as (φα⋆f)(x)=∫Rnφα(x−y)f(y)dy. For α>0, let Mα be the mollifier operator defined by

Let uα be the solution of the equation

Assume that there exists a function ϱ:R∗+→R+ such that the mollifier kernel φ verifies

Then the family (uα)α>0 solution of equation (17) defines a regularization method for problem (1) in L2(Rn).

From the first equation in (18), we can derive that

Moreover, one can easily check that vx,α is nothing but the solution of the adjoint equation

Hence, we deduce that the solution uα of equation (17) actually corresponds to the approximate-inverse [louis1990mollifier] regularized solution of equation (12), the pair (vx,α,eα) being what is usually called reconstruction kernel - mollifier.

For the Fourier regularization [yang2015fourier] (where n=1), we have

denotes the characteristic function of the set

In this case, condition (20) merely reads

For the mollification method of N. Van Duc et al. [van2020mollification], the mollifier operator Mα is denoted Sν where Sν is the convolution by the so called Dirichlet kernel Dν defined as

Hence we can deduce that, this merely corresponds to

we see that condition (20) merely reads

Now on, let us consider a mollifier kernel φ defined by

Let b and d be two positive numbers, consider the function fb,d(x)=(1+x)e−bxd. Then there exists a constant C depending only on d such that

The proof of Lemma 3 is deferred to appendix. Lemma 3 will help us to prove that the kernel φ given by (27) allows us to define a regularization method for equation (1).

Let Mα be the mollifier operator defined by (15) with the kernel φ given in (27) with τ and s being two positive numbers. Then the family (uα)α>0 of function uα solution of equation (17) defines a regularization method for equation (1).

From Proposition 2, we can see that the family of function (φs)s>0 defined by (27) allows to define a family of regularization methods, each regularization method being determined by the choice of the free parameter s>0. For instance, the choice s=1 means considering a Cauchy convolution kernel while s=2 means taking a Gaussian convolution kernel.

Let us end this section by the following Lemma which gives rates of convergence of the mollifier operator Mα corresponding to kernel φ defined by (27) on Sobolev spaces Hp(Rn) with p>0.

Proof. Let f∈Hp(Rn). If p<s, using Parseval identity, we have

where g=u(⋅,T) is the exact final distribution. Let us introduce the regularized solution uδα corresponding to the noisy data gδ as the solution of equation

Equivalently, we can define uδα in the frequency domain by

Before presenting the main results of this section, let us state some lemmas which will be useful in the sequel.

Proof. The proof follows readily by applying Parseval identity and estimate (8) to equation ˆv(ξ,t)=ˆv(ξ,0)Eγ,1(−|ξ|2tγ) which links v(⋅,0) and v(⋅,t) in the frequency domain. The next lemma illustrates the fact that the Sobolev smoothness condition (34) is nothing but a Hölder source condition.

Let p>0, u be the solution of problem (1) and A being the forward diffusion operator defined in (13). The smoothness condition u(⋅,0)∈Hp(Rn) is equivalent to the Hölder source condition u(⋅,0)=(A∗A)p/4w with w∈L2(Rn), satisfying

Proof. For u(⋅,0)∈Hp(Rn), formally define w in the frequency domain by

From Lemma 6, we can deduce that the order optimal convergence rate under smoothness condition (34) is nothing but CE2p+2δpp+2 with C≥1 independent of E and δ.

The next Lemma which generalizes [van2020mollification, Lemma 3] will be useful in the sequel for establishing Sobolev norm error estimates.