Array codes have been widely employed in storage systems, such as Redundant Arrays of Inexpensive Disks (RAID). The row-diagonal parity (RDP) codes and EVENODD codes are two popular double-parity array codes. As the capacity of hard disks increases, better fault tolerance by using array codes with three or more parity disks is needed. Although many extensions of RDP codes and EVENODD codes have been proposed, the high decoding complexity is the main drawback of them. In this paper, we present a new construction for all families of EVENODD codes and RDP codes, and propose a unified form of them. Under this unified form, RDP codes can be treated as shortened codes of EVENODD codes. Moreover, an efficient decoding algorithm based on an LU factorization of Vandermonde matrix is proposed when the number of continuous surviving parity columns is no less than the number of erased information columns. The new decoding algorithm is faster than the existing algorithms when more than three information columns fail. The proposed efficient decoding algorithm is also applicable to other Vandermonde array codes. Thus the proposed MDS array code is practically very meaningful for storage systems that need higher reliability. 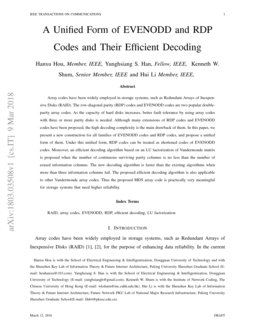 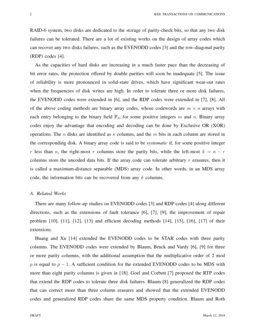 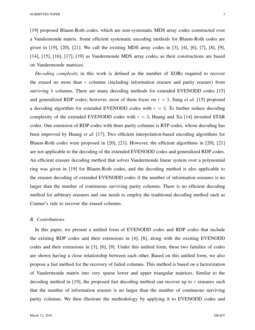 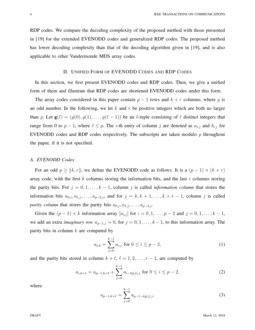 Array codes have been widely employed in storage systems, such as Redundant Arrays of Inexpensive Disks (RAID) [1, 2], for the purpose of enhancing data reliability. In the current RAID-6 system, two disks are dedicated to the storage of parity-check bits, so that any two disk failures can be tolerated. There are a lot of existing works on the design of array codes which can recover any two disks failures, such as the EVENODD codes [3] and the row-diagonal parity (RDP) codes [4].

As the capacities of hard disks are increasing in a much faster pace than the decreasing of bit error rates, the protection offered by double parities will soon be inadequate [5]. The issue of reliability is more pronounced in solid-state drives, which have significant wear-out rates when the frequencies of disk writes are high. In order to tolerate three or more disk failures, the EVENODD codes were extended in [6], and the RDP codes were extended in [7, 8]. All of the above coding methods are binary array codes, whose codewords are m×n arrays with each entry belonging to the binary field F2, for some positive integers m and n. Binary array codes enjoy the advantage that encoding and decoding can be done by Exclusive OR (XOR) operations. The n disks are identified as n columns, and the m bits in each column are stored in the corresponding disk. A binary array code is said to be systematic if, for some positive integer r less than n, the right-most r columns store the parity bits, while the left-most k=n−r columns store the uncoded data bits. If the array code can tolerate arbitrary r erasures, then it is called a maximum-distance separable (MDS) array code. In other words, in an MDS array code, the information bits can be recovered from any k columns.

Huang and Xu [14] extended the EVENODD codes to be STAR codes with three parity columns. The EVENODD codes were extended by Blaum, Bruck and Vardy [6, 9] for three or more parity columns, with the additional assumption that the multiplicative order of 2 mod p is equal to p−1. A sufficient condition for the extended EVENODD codes to be MDS with more than eight parity columns is given in [18]. Goel and Corbett [7] proposed the RTP codes that extend the RDP codes to tolerate three disk failures. Blaum [8] generalized the RDP codes that can correct more than three column erasures and showed that the extended EVENODD codes and generalized RDP codes share the same MDS property condition. Blaum and Roth [19] proposed Blaum-Roth codes, which are non-systematic MDS array codes constructed over a Vandermonde matrix. Some efficient systematic encoding methods for Blaum-Roth codes are given in [19, 20, 21]. We call the existing MDS array codes in [3, 4, 6, 9, 7, 8, 19, 14, 15, 16, 17] as Vandermonde MDS array codes, as their constructions are based on Vandermonde matrices.

In this paper, we present a unified form of EVENODD codes and RDP codes that include the existing RDP codes and their extensions in [4, 8], along with the existing EVENODD codes and their extensions in [3, 6, 9]. Under this unified form, these two families of codes are shown having a close relationship between each other. Based on this unified form, we also propose a fast method for the recovery of failed columns. This method is based on a factorization of Vandermonde matrix into very sparse lower and upper triangular matrices. Similar to the decoding method in [19], the proposed fast decoding method can recover up to r erasures such that the number of information erasure is no larger than the number of continuous surviving parity columns. We then illustrate the methodology by applying it to EVENODD codes and RDP codes. We compare the decoding complexity of the proposed method with those presented in [19] for the extended EVENODD codes and generalized RDP codes. The proposed method has lower decoding complexity than that of the decoding algorithm given in [19], and is also applicable to other Vandermonde MDS array codes.

In this section, we first present EVENODD codes and RDP codes. Then, we give a unified form of them and illustrate that RDP codes are shortened EVENODD codes under this form.

The array codes considered in this paper contain p−1 rows and k+r columns, where p

is an odd number. In the following, we let

k and r be positive integers which are both no larger than p. Let g(ℓ)=(g(0),g(1),…,g(ℓ−1)) be an ℓ-tuple consisting of ℓ distinct integers that range from 0 to p−1, where ℓ≤p. The i-th entry of column j are denoted as ai,j and bi,j for EVENODD codes and RDP codes respectively. The subscripts are taken modulo p throughout the paper, if it is not specified.

There is a close relationship between RDP(p,k,r;g(k+1)) and EVENODD(p,k,r;g(k)) when both array codes have the same number of parity columns. The relationship can be seen by augmenting the arrays as follows. For RDP codes, we define the corresponding augmented array as a p×(k+r) array with the top p−1 rows the same as in RDP(p,k,r), and the last row defined by bp−1,j=0 for 0≤j≤k and

Note that (6) is the extension of (5) when i=p−1. The auxiliary row in the augmented array is defined such that the column sums of columns k+1,k+2,…,k+r−1 are equal to zero. The above claim is proved as follows.

Let F2[x] be the ring of polynomials over binary field F2, and Rp be the quotient ring F2[x]/(1+xp). An element in Rp can be represented by a polynomial of degree strictly less than p with coefficients in F2, we will refer to an element of Rp as a polynomial in the sequel. Note that the multiplication of two polynomials in Rp is performed under modulo 1+xp.

The ring Rp has been discussed in [22, 23] and has been used in designing regenerating codes with low computational complexity. Let

We will represent each column in a augmented array of EVENODD(p,k,r;g(k)) by a polynomial in Rp, so that a p×n array is identified with an n-tuple

in Rk+rp, where n=k+r. Under this representation, the augmented array of EVENODD(p,k,r;g(k)) can be defined in terms of a Vandermonde matrix.

and additions and multiplications in the above calculations are performed in Rp. (15) can be verified as follows:

which is the same as (7). In other words, each parity column in the augmented array of EVENODD codes is obtained by adding some cyclically shifted version of the information columns.

By Proposition 3, we can obtain the augmented array of RDP(p,k,r;g(k+1)) by multiplying

and removing the k+2-th component, which is always equal to zero, in the resultant product. If we arrange all coefficients in the polynomials with degree strictly less than p−1, we get the original (p−1)×(k+r) array of RDP(p,k,r;g(k+1)).

where a1,…,ar are distinct integers such that the difference of each pair of them is relatively prime to p. The entries of Vr×r(a) are considered as polynomials in Rp. We investigate the action of multiplication over Vr×r(a) by defining the function F:Rrp→Rrp:

is not surjective. If a vector

The function F is also not injective. We can see this by observing that if we add the polynomial Mp(x) to a component of u, for example, adding Mp(x) to ui(x), then

Hence, if we add Mp(x) to two distinct components of input vector u, then the value of F(u) does not change. We need the following lemma before discussing the properties of the Vandermonde linear system over Rp.

If the vector v satisfies (19), in the next theorem, we show that there are many vectors u such that F(u)=v.