We introduce a general method, named the h-function method, to unify the constructions of level-alpha exact test and 1-alpha exact confidence interval. Using this method, any confidence interval is improved as follows: i) an approximate interval, including a point estimator, is modified to an exact interval; ii) an exact interval is refined to be an interval that is a subset of the previous one. Two real datasets are used to illustrate the method. 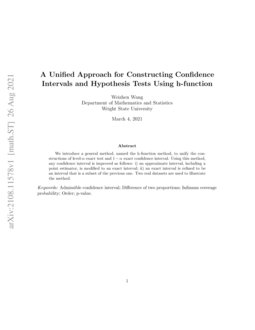 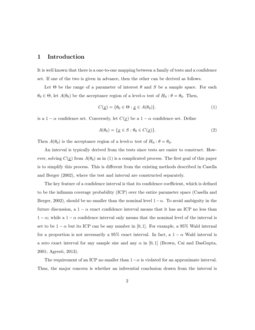 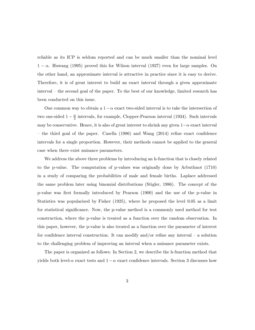 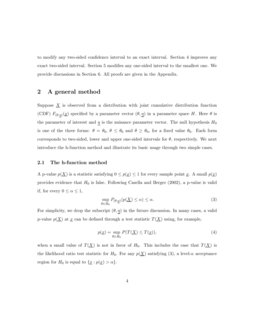 It is well known that there is a one-to-one mapping between a family of tests and a confidence set. If one of the two is given in advance, then the other can be derived as follows.

Let Θ be the range of a parameter of interest θ and S be a sample space. For each θ0∈Θ, let A(θ0) be the acceptance region of a level-α test of H0:θ=θ0. Then,

An interval is typically derived from the tests since tests are easier to construct. However, solving C(x––) from A(θ0) as in (1) is a complicated process. The first goal of this paper is to simplify this process. This is different from the existing methods described in Casella and Berger (2002), where the test and interval are constructed separately.

The key feature of a confidence interval is that its confidence coefficient, which is defined to be the infimum coverage probability (ICP) over the entire parameter space (Casella and Berger, 2002), should be no smaller than the nominal level 1−α. To avoid ambiguity in the future discussion, a 1−α exact confidence interval means that it has an ICP no less than 1−α; while a 1−α confidence interval only means that the nominal level of the interval is set to be 1−α but its ICP can be any number in [0,1]. For example, a 95% Wald internal for a proportion is not necessarily a 95% exact interval. In fact, a 1−α Wald interval is a zero exact interval for any sample size and any α in [0,1] (Brown, Cai and DasGupta, 2001; Agresti, 2013).

One common way to obtain a 1−α exact two-sided interval is to take the intersection of two one-sided 1−α2 intervals, for example, Clopper-Pearson interval (1934). Such intervals may be conservative. Hence, it is also of great interest to shrink any given 1−α exact interval – the third goal of the paper. Casella (1986) and Wang (2014) refine exact confidence intervals for a single proportion. However, their methods cannot be applied to the general case when there exist nuisance parameters.

We address the above three problems by introducing an h-function that is closely related to the p-value. The computation of p-values was originally done by Arbuthnot (1710) in a study of comparing the probabilities of male and female births. Laplace addressed the same problem later using binomial distributions (Stigler, 1986). The concept of the p-value was first formally introduced by Pearson (1900) and the use of the p-value in Statistics was popularized by Fisher (1925), where he proposed the level

0.05 as a limit for statistical significance. Now, the p-value method is a commonly used method for test construction, where the p-value is treated as a function over the random observation. In this paper, however, the p-value is also treated as a function over the parameter of interest for confidence interval construction. It can modify and/or refine any interval – a solution to the challenging problem of improving an interval when a nuisance parameter exists.

The paper is organized as follows: In Section 2, we describe the h-function method that yields both level-α exact tests and 1−α exact confidence intervals. Section 3 discusses how to modify any two-sided confidence interval to an exact interval. Section 4 improves any exact two-sided interval. Section 5 modifies any one-sided interval to the smallest one. We provide discussions in Section 6. All proofs are given in the Appendix.

specified by a parameter vector

(θ,η–) in a parameter space H. Here θ is the parameter of interest and η–

is the nuisance parameter vector. The null hypothesis

H0 is one of the three forms: θ=θ0, θ≤θ0 and θ≥θ0, for a fixed value θ0. Each form corresponds to two-sided, lower and upper one-sided intervals for θ, respectively. We next introduce the h-function method and illustrate its basic usage through two simple cases.

For simplicity, we drop the subscript (θ,η–) in the future discussion. In many cases, a valid p-value p(X––) at x––

can be defined through a test statistic

Note that H0 is equal to a single point θ0 or a one-sided interval with the boundary point θ0. The p-value p(X––) indeed depends on both X–– and θ0. This is the key fact for the future theoretical development. Thus, we rewrite the p-value as

and call the left hand side the h-function. We emphasis that the h-function closely relates to but is different from the p-value. The former is a function of both the random observation and parameter of interest, while the latter is typically treated as a function of the random observation. Based on this h(X––,θ0), the level-α acceptance region for H0 and 1−α exact confidence set for θ are given by

respectively. Both A(θ0) and C(x––) are obtained by solving the same inequality h(x––,θ0)>α but in terms of two different arguments x–– and θ0, respectively. In this sense, the constructions of test and confidence set are unified. We do not obtain A(θ0) or C(x––) from each other following (1) and (2). Instead, we use the intermediary h-function in (5) and name it the h-function method. In fact, Blaker (2000) used a special h in (6) to derive confidence intervals for four discrete distributions of a single parameter. Here, the h-function method is applied to a general case with or without nuisance parameters. In particular, Blaker interval (2000) can be uniformly shortened by this method as shown in Table 4.

For illustration of the h-function method, we next consider two classic problems: i) estimating the proportion p based on a binomial observation X∼Bino(n,p); ii) estimating the difference of two proportions d=p1−p2 based on two independent binomials X∼Bino(n1,p1) and Y∼Bino(n2,p2). These are widely used in practice, including clinical trials. The two problems are still open since the best intervals for p and d have not been recognized yet. Let pB(x,n,p) and FB(x,n,p) denote the PMF and CDF of Bino(n,p).

2.2 Two-sided confidence intervals for a proportion

and a small value of Tp(x,p0) supports HA. Hence, the h-function based on Tp(x,p0) is

Now we state a fact that the upper limit Up(x) of interval Cp(x) can be obtained using the lower limit Lp(x) and vice versa. This simplifies interval construction by half.

For a test statistic Tp satisfying (8), we have

Define the second h-function based on a test statistic Tp2(x,p0),

The third h-function based on the likelihood ratio test statistic Tp3(x,p0) is

We report in Table 1 the infimum coverage probability (ICP) and total interval length (TIL) over all n+1 sample points for the above intervals Cpi for i=1,2,3 when n is from 16 to 100. Their ICPs are all no smaller than 0.95. Due to Wang (2007), the ICP of an interval C(X) for p with a nondecreasing lower confidence limit L(X) is achieved at one of the values (L(x))− for x=1,...,n, where a− denotes the left limit of y when y approaches a. Thus, the ICP of C(X) can be computed precisely. Interval Cp2 is the winner among the three due to its small TIL. In Section 4, we see that these three intervals are uniformly shorter, as shown in Table 4, than their modified intervals CMpi. For comparison purpose, the interval Cp4 in Wang (2014) is also reported. This interval, derived by an iterative algorithm, is admissible and is shortest among the four intervals. Here, a 1−α exact confidence interval C(X––) is admissible if any interval C′(X––), which is contained in but not equal to C(X––), has an ICP less than 1−α.

2.3 Confidence intervals for the difference of two proportions

There are three commonly used measurements, the difference d=p1−p2

, the relative risk and the odds ratio, for comparison of the two proportions. Here we focus on the difference. Consider the following hypotheses for any fixed

Similar to Proposition 1, we state a fact that determines the upper limit Ud(x,y) of Cd(x,y) from its lower limit Ld(x,y) and vice versa. This again simplifies interval calculation.

For a test statistic Td satisfying (10), we have

3 Modifying any given two-sided confidence interval

For convenience, we consider the closed interval C0(X––)=[L0(X––),U0(X––)] for θ if the confidence limits are not infinity. For a given value θ0, consider

Following (6), the level-α acceptance region for H0 and 1−α exact two-sided confidence interval for θ are

For any given confidence interval C0(X––), consider the hypotheses (14).

The theorem modifies a confidence interval C0(X––) of any level, including a point estimator (a zero exact confidence interval), to a 1−α exact confidence interval CM0(X––). Also, when using CM0(X––) to conduct a level-α test for H0 one simply rejects H0 if θ0 falls outside the interval but is unable to report a p-value. Now the p-value is given by h2(x––,θ0) in (17). The test of rejecting H0 if this p-value is no larger than α is an exact test of level α; On the contrary, the test of rejecting H0 if θ0 falls outside C0(X––) is not of level α if C0(X––) is not a 1−α exact interval.

Example 1. (more confidence intervals for a proportion) Interval estimation of p based on X∼Bino(n,p) is one of the basic inferential problems. Asymptotic intervals play an important role but may not be reliable. We apply the modification process of (15) through (18) to several commonly used intervals to obtain exact intervals.

th percentile of the standard normal distribution. It is known that Wald interval

Here is an interesting part. Can we apply the modification process to a point estimator to obtain a 1−α exact interval? The answer is yes. Table 3 reports the sample proportion Cp7(X)=Xn (a zero-length interval estimator of level zero) and its modification CMp7(X). The latter turns out to be admissible following the same argument in the previous paragraph. i.e., the refinement of CMp7(X) from Wang’s approach is equal to CMp7(X). We try another (arbitrary) point estimator Cp8(X), which satisfies (9) and has a nondecreasing confidence limits, see Table 3. The modified CMp8(X) has an ICP 95% and can be shortened further because CM17p8(X) is a subset of CMp8(X).

Example 2. (more confidence intervals for the difference of two proportions) We now modify two approximate intervals for d=p1−p2 based on two independent binomials X and Y in Section 2.3. The first is Wald interval for d:

This interval has a zero ICP for any n1 and n2 and α (Wang and Zhang, 2014). The second is the MLE of d that is treated as a confidence interval

Clearly, this interval has a zero ICP and a zero length. Theorem 1 is applied to these two approximate intervals to obtain two 1−α exact confidence intervals CMd3(X,Y) and CMd4(X,Y). The modified intervals have a larger TIL over all sample points than the original intervals because they have a correct ICP that is at least 1−α. Table 2 contains several examples. Theorem 1 is also applied to three exact intervals, Cd1(X,Y) and Cd2(X,Y), discussed in Section 2.3 and the two-one-sided interval in Wang (2010), denoted by Cd5(X,Y). This time all TIL’s of modified intervals decrease rather than increase. See Table 2.

Example 3 (the z-interval and its variants) In this example, we investigate the effect of choosing a point estimator on the modified confidence interval. Suppose {X1,...,Xn} is a random sample from a normal population N(μ,σ2) for known σ2. Confidence intervals for μ based on the minimum sufficient statistic ¯X, including the z-interval, are of interest. Consider H0:μ=μ0 vs HA:μ≠μ0. If μ is estimated by a point estimator a¯X+b for two given constants a>0 and b, then, following (15), define a test statistic