A tutorial on the range variant of asymmetric numeral systems

This paper is intended to be an accessible introduction to the range variant of Asymmetric Numeral Systems (rANS). This version of ANS can be used as a drop in replacement for traditional arithmetic coding (AC). Implementing rANS is more straightforward than AC, and this paper includes pseudo-code which could be converted without too much effort into a working implementation. An example implementation, based on this tutorial, is available at https://raw.githubusercontent.com/j-towns/ans-notes/master/rans.py. After reading (and understanding) this tutorial, the reader should understand how rANS works, and be able to implement it and prove that it attains a near optimal compression rate. 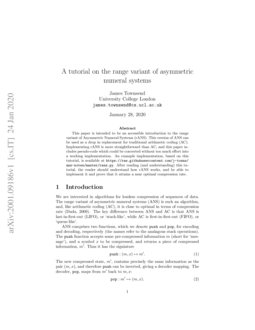 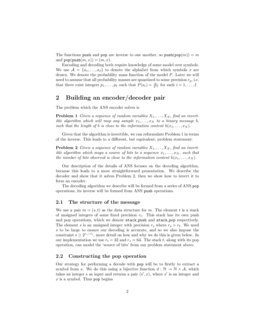 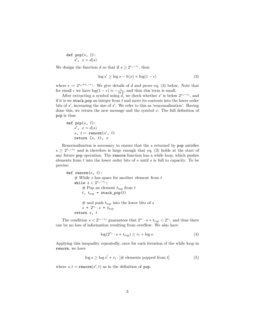 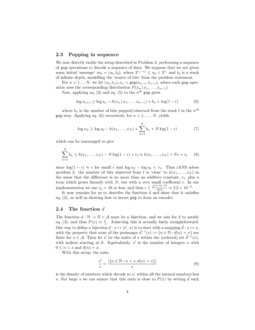 On Asymmetric Unification for the Theory of XOR with a Homomorphism

The t-digest is a data structure that can be queried for approximate qua...
Joseph Ross, et al. ∙

Huffman coding is known to be optimal, yet its dynamic version may be ev...
Aharon Fruchtman, et al. ∙

We are interested in algorithms for lossless compression of sequences of data. The range variant of asymmetric numeral systems (ANS) is such an algorithm, and, like arithmetic coding (AC), it is close to optimal in terms of compression rate dudaAsymmetricNumeralSystems2009. The key difference between ANS and AC is that ANS is last-in-first-out (LIFO), or ‘stack-like’, while AC is first-in-first-out (FIFO), or ‘queue-like’.

ANS comprises two functions, which we denote push and pop, for encoding and decoding, respectively (the names refer to the analagous stack operations). The push function accepts some pre-compressed information m (short for ‘message’), and a symbol x to be compressed, and returns a piece of compressed information, m′. Thus it has the signiature

The new compressed state, m′, contains precisely the same information as the pair (m,x), and therefore push can be inverted, giving a decoder mapping. The decoder, pop, maps from m′ back to m,x:

The functions push and pop are inverse to one another, so push(pop(m))=m and pop(push(m,x))=(m,x).

Encoding and decoding both require knowledge of some model over symbols. We use A={a1,…,aI} to denote the alphabet from which symbols x

are drawn. We denote the probability mass function of the model

P. Later we will need to assume that all probability masses are quantized to some precision rp, i.e. that there exist integers p1,…,pI such that P(ai)=pi2rp for each i=1,…,I.

The problem which the ANS encoder solves is

Given a sequence of random variables

X1,…,XN, find an invertible algorithm which will map any sample x1,…,xN to a binary message b, such that the length of b is close to the information content h(x1,…,xN).

Given that the algorithm is invertible, we can reformulate creftypecap 1 in terms of the inverse. This leads to a different, but equivalent, problem statement:

Given a sequence of random variables X1,…,XN, find an invertible algorithm which maps a source of bits to a sequence x1,…,xN, such that the number of bits observed is close to the information content h(x1,…,xN).

Our description of the details of ANS focuses on the decoding algorithm, because this leads to a more straightforward presentation. We describe the decoder and show that it solves creftypecap 2, then we show how to invert it to form an encoder.

2.1 The structure of the message

We use a pair m=(s,t) as the data structure for m. The element t is a stack of unsigned integers of some fixed precision rt. This stack has its own push and pop operations, which we denote stack_push and stack_pop respectively. The element s is an unsigned integer with precision rs where rs>rt. We need s to be large to ensure our decoding is accurate, and so we also impose the constraint s≥2rs−rt, more detail on how and why we do this is given below. In our implementation we use rt=32 and rs=64. The stack t, along with its pop operation, can model the ‘source of bits’ from our problem statement above.

Our strategy for performing a decode with pop will be to firstly to extract a symbol from s. We do this using a bijective function d:N→N×A, which takes an integer s as input and returns a pair (s′,x), where s′ is an integer and x is a symbol. Thus pop begins

We design the function d so that if s≥2rs−rt, then

After extracting a symbol using d, we check whether s′ is below 2rs−rt, and if it is we stack_pop an integer from t and move its contents into the lower order bits of s′, increasing the size of s′. We refer to this as ‘renormalization’. Having done this, we return the new message and the symbol x. The full definition of pop is thus

Renormalization is necessary to ensure that the s returned by pop satisfies s≥2rs−rt and is therefore is large enough that eq. 3 holds at the start of any future pop operation. The renorm function has a while loop, which pushes elements from t into the lower order bits of s until s is full to capacity. To be precise:

The condition s<2rs−rt guarantees that 2rt⋅s+ttop<2rs, and thus there can be no loss of information resulting from overflow. We also have

Applying this inequality repeatedly, once for each iteration of the while loop in renorm, we have

where s,t=renorm(s′,t) as in the definition of pop.

We now directly tackle the setup described in creftypecap 2, performing a sequence of pop operations to decode a sequence of data. We suppose that we are given some initial ‘message’ m0=(s0,t0), where 2rs−rt≤s0<2rs and t0 is a stack of infinite depth, modelling the ‘source of bits’ from the problem statement.

where bn is the number of bits popped/observed from the stack t in the nth pop step. Applying eq. 6 recursively, for n=1,…,N, yields

which can be rearranged to give

since log(1−ϵ)≈ϵ for small ϵ and logsN−logs0<rt. Thus rANS solves creftype 2: the number of bits observed from t is ‘close’ to h(x1,…,xN) in the sense that the difference is no more than an additive constant, rt, plus a term which grows linearly with N, but with a very small coefficient ϵ. In our implementation we use rp=16 or less, and thus ϵ≤216+32−64ln2≈2.2×10−5.

It now remains for us to describe the function d and show that it satisfies eq. 3, as well as showing how to invert pop to form an encoder.

The function d:N→N×A must be a bijection, and we aim for d to satisfy eq. 3, and thus P(x)≈s′s. Achieving this is actually fairly straightforward. One way to define a bijection d:s↦(s′,x) is to start with a mapping ~d:s↦x, with the property that none of the preimages ~d−1(x):={n∈N:~d(n)=x} are finite for x∈A. Then let s′ be the index of s within the (ordered) set ~d−1(x), with indices starting at 0. Equivalently, s′ is the number of integers n with 0≤n<s and d(n)=x.

With this setup, the ratio

To do this, we partition N into finite ranges of equal length, and treat each range as a model for the interval [0,1], with sub-intervals within [0,1] corresponding to each symbol, and the width of each sub-interval being equal to the corresponding symbol’s probability (see LABEL:fig:interval). To be precise, the mapping ~d can then be expressed as a composition ~d=~d2∘~d1, where ~d1 does the partitioning described above, and ~d2 assigns numbers within each partition to symbols (sub-intervals). So

Using the shorthand ¯s:=~d1(a), and defining

as the (quantized) cumulative probability of symbol aj−1,

illustrates this mapping, with a particular probability distribution, for the range