A Tutorial on the Mathematical Model of Single Cell Variational Inference

As the large amount of sequencing data accumulated in past decades and it is still accumulating, we need to handle the more and more sequencing data. As the fast development of the computing technologies, we now can handle a large amount of data by a reasonable of time using the neural network based model. This tutorial will introduce the the mathematical model of the single cell variational inference (scVI), which use the variational auto-encoder (building on the neural networks) to learn the distribution of the data to gain insights. It was written for beginners in the simple and intuitive way with many deduction details to encourage more researchers into this field. 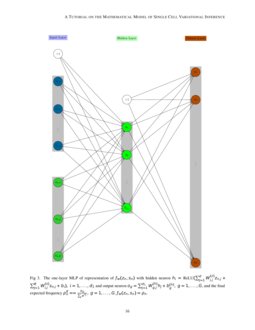 formally, where the variance matrix of

is not invertible, and x

is a degenerated normal distribution. Suppose that we see a set of samples of

By a simple linear regression, we can easily get the relation

x2=2x1. This means that x lines on a one-dimensional manifold, we can easily find the the contraction function z=f(x)=x1 and recovery the x from code z by the generation function x=g(z)=[z,2z]. For this simple example, a simple guess solves this problem. Can we find an algorithm from the above process to formulate a general method to solve this kind of problem but with more complicated data? Yes! Auto-encoder is one of such a method. It is a framework to learn the generation function g(⋅) and encode (contraction) function f(⋅). Now we apply the auto-encoder method to go through this simple example to gain the basic ideas. We now suppose that g and f

comes from the linear transform function, and

And then using the SGD methods or its variants to train the model on the training data to minimize the objective function (5 ).

Since this objection is differentiable, we can set the first order of the objective function to get the stable condition.

when we fix the b1,b2, we can get the following linear system about a1,a2.

Note that in the above equation, the second equation is a double times of the first equation, we simply get

Bring them together, we get the following necessary condition of the stable point.

It can be simplifed to the following equation

When there is a freedom of the optimal parameters in the function, it usually will cause the optimization algorithm unstable since it can jump between the many optimums. If there are many parameters of function than which need to fit the true solution, it will cause overfitting of the training data which we learning the noise information in the training data in the function which will deviate from the true solution. A general principle is to add a penalty on the objective function to avoid it, and the penalty can the l2/l1 norm of the parameters of the function. We now add the l2 norm penalty on the parameters a1,a2,b1,b2 with multiplier λ

, it will give the following loss function:

We carry out the same analysis above. First, we use the first order condition to get the following condition which the parameter must obey when it arrives at a local minimum of the objective function.

when we fix the b1,b2, we can get the following linear system about a1,a2.

We now assume δ:=b21+b22>0,λ>0 which is true usually, so that the coefficient matrix is invertible. We have the following solution

Note that if γ

is the sample estimation of

, which results in a1+2a2≈1, this is what we needed. Note that when we add the l2 norm, we focus a optimum point form the original on a line to a point, the reason is that the l2 norm add a local convexity on the loss landscape.

Bring them together, we get the following necessary condition of the stable point.

Under the condition that λ>0, we can solve the above equation to get the solutions

Now we focus on the positive solution, when λ=0,γ=1, we have

What will happen if we apply the l1 penalty to the original objective, we left the exploration to you.

In the general form of auto-encoder, such as use in the image processing, it consists of encoder function z=f(x,θf) and decoder function x=g(z,θg) , they are represented by the neural network with parameters θf,θg, respectively. And general form of the neural networks can be represented in the form f(x,θf)=σm(Am(σm−1(Am−1(⋯σ2(A2σ1(A1x+b1)+b2))+bm−1))+bm), where σi(⋅)

Ai∈Rdi×di−1 is the linear projection matrix and bi∈Rdi×1 is the intercept term, it has m−1 hidden layers and final m-th layer is the output layer, and parmameters θf:={A1,…,Am,b1,…,bm}. The loss function is given by

And it is optimized by the SGD algorithm or its variants, and these methods only need the computation of the gradient of loss function on a mini-batch of samples essentially.

Now, we begin to tell the general story of the variational auto-encoder(Kingma and Welling (2014), Doersch (2016)) with general symbol. After that we begin to introduce the scVI model, which is a variational encoder designed for the scRNA-seq data.

We now use the same symbols in the Kingma and Welling (2014) to make it more easy to understand. To tackle the uncomputable probability distribution of z, the variational auto-encoder assume that data point x comes from the hidden continuous variable z. z is generated from the probability distribution pθ⋆(z), and then x comes from the conditional distribution pθ⋆(x|z). And this is represented in the Fig 1 (Kingma and Welling (2014)) with the solid arrow.

The DKL(p(x)||q(x)):=∫xp(x)logp(x)q(x)dx is KL divergence between two distribution p(x),q(x), which is nonnegative. The second RHS term basically measure the divergence of approximate from the true posterior. And since it is non-negative, we call it a lower bound. We can rewrite the variational lower bound into the known quantities pθ(z),pθ(x|z),qϕ(z|x).

So we get the classical representation of the variational lower bound.

The first RHS term is the KL divergence between the approximate posterior qϕ(z|x(i)) and the prior distribution pθ(z) of the hidden continuous variable z. When qϕ(z|x(i))=pθ(z|x(i)), we have a tight bound.

Note that if z is a continuous distribution in a d dimensional space, e.g, normal distribution, x

is a random vector in the

d2≤d dimensional space, then we can find a function f:Rd→Rd2 such that x=f(z) also surely(Kingma and Welling (2014)) with the proper complex function f(⋅). We can conjecture that if the random vector x∈Rn,n≥d2 lies on manifold with essentially d2 dimension, we can also find the function f:Rd→Rn, such that x=f(z). Now if z∼N(0,I), and x is random vector represents the gene expression distribution. Since there are complicated regulatory network between genes, the function f(z)=x should represent these complex regulatory networks. Now, the distribution of z

Here, we should point out that the complex regulatory networks between genes is modeled mainly by the mean of the negative binomial distribution.

z will capture some dependence structure of x, we give a simple example. Now let z∼N(0,1) is standard normal variable, and p(x|z) is the conditional density of N([z,2z],diag(1,1)). We can get the p(x) in a close form.

So we get that

It shows that this simple example will capture the dependence of x1,x2 with Cov(x1,x2)=2=Cov(z,2z)=Cov(μ(z,θ)1,μ(z,θ)2). So in general form x∼N(μ(z,θ),diag(σ(z,θ))) with the mean μ and diagonal variance σ(z,θ) output by nonlinear mapping such as neural networks, then the density p(x) will capture complex dependence networks. If x is the gene expressions, this will capture the complex gene regulatory networks, and the complex gene regulatory networks are captured by μ(z,θ). This may be one reason of the success of the scVI model.

To train the neural networks on a large dataset, it use the stochastic optimization to train the model, which needs that a low variance estimate of the gradients of the objective function (variational lower bound). In most case, the parametric families of distribution of pθ(z) will leads an analytical of expression DKL(qϕ(z|x(i))||pθ(z)) which is the differentiable with parameters (θ,ϕ). While there is some problem with the reconstruction error term Eqϕ(z|x(i))logpθ(x(i)|z) of the variational lower bound. If we use

to estimate it, this will cause two problems. The first one is that variance of this estimation is very high, so it will fail the stochastic optimization. And the second one is that we can not differentiate it with parameters ϕ, since the backward gradient can not pass through a sample z(i,l) to the parameters of the distribution qϕ(z|x(i)). To get around this problem, Kingma and Welling (2014) proposed the reparametrization trick. The trick use the fact that we can express the random variable z∼qϕ<span class="mjx-mo"