Recent advances in Neural Machine Translation (NMT) show that adding syntactic information to NMT systems can improve the quality of their translations. Most existing work utilizes some specific types of linguistically-inspired tree structures, like constituency and dependency parse trees. This is often done via a standard RNN decoder that operates on a linearized target tree structure. However, it is an open question of what specific linguistic formalism, if any, is the best structural representation for NMT. In this paper, we (1) propose an NMT model that can naturally generate the topology of an arbitrary tree structure on the target side, and (2) experiment with various target tree structures. Our experiments show the surprising result that our model delivers the best improvements with balanced binary trees constructed without any linguistic knowledge; this model outperforms standard seq2seq models by up to 2.1 BLEU points, and other methods for incorporating target-side syntax by up to 0.7 BLEU. 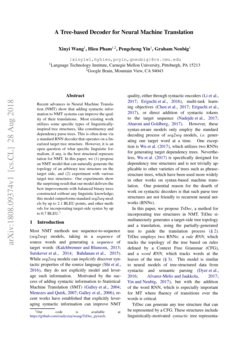 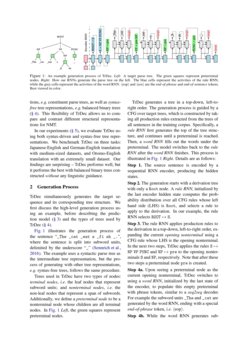 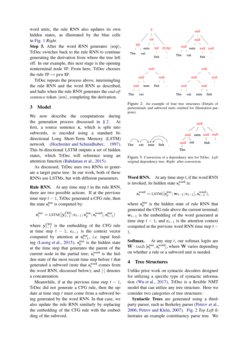 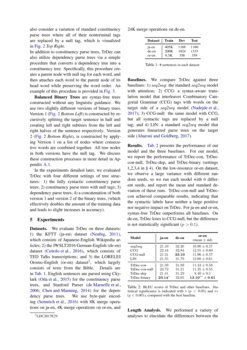 Inducing Grammars with and for Neural Machine Translation

is specifically designed for dependency tree structures and is not trivially applicable to other varieties of trees such as phrase-structure trees, which have been used more widely in other works on syntax-based machine translation. One potential reason for the dearth of work on syntactic decoders is that such parse tree structures are not friendly to recurrent neural networks (RNNs).

In this paper, we propose TrDec, a method for incorporating tree structures in NMT. TrDec simultaneously generates a target-side tree topology and a translation, using the partially-generated tree to guide the translation process (§ 2). TrDec employs two RNNs: a rule RNN, which tracks the topology of the tree based on rules defined by a Context Free Grammar (CFG), and a word RNN, which tracks words at the leaves of the tree (§ 3). This model is similar to neural models of tree-structured data from syntactic and semantic parsing (Dyer et al., 2016; Alvarez-Melis and Jaakkola, 2017; Yin and Neubig, 2017), but with the addition of the word RNN, which is especially important for MT where fluency of transitions over the words is critical.

In our experiments (§ 5), we evaluate TrDec using both syntax-driven and syntax-free tree representations. We benchmark TrDec on three tasks: Japanese-English and German-English translation with medium-sized datasets, and Oromo-English translation with an extremely small dataset. Our findings are surprising – TrDec performs well, but it performs the best with balanced binary trees constructed without any linguistic guidance.

TrDec simultaneously generates the target sequence and its corresponding tree structure. We first discuss the high-level generation process using an example, before describing the prediction model (§ 3) and the types of trees used by TrDec (§ 4).

Fig. 1 illustrates the generation process of the sentence “_The _cat _eat s _fi sh _.”, where the sentence is split into subword units, delimited by the underscore “_” (Sennrich et al., 2016). The example uses a syntactic parse tree as the intermediate tree representation, but the process of generating with other tree representations, e.g. syntax-free trees, follows the same procedure.

TrDec generates a tree in a top-down, left-to-right order. The generation process is guided by a CFG over target trees, which is constructed by taking all production rules extracted from the trees of all sentences in the training corpus. Specifically, a rule RNN first generates the top of the tree structure, and continues until a preterminal is reached. Then, a word RNN fills out the words under the preterminal. The model switches back to the rule RNN after the word RNN finishes. This process is illustrated in Fig. 1 Right. Details are as follows:

Step 1. The source sentence is encoded by a sequential RNN encoder, producing the hidden states.

Step 2. The generation starts with a derivation tree with only a Root node. A rule RNN,

Root, and selects a rule to apply to the derivation. In our example, the rule RNN selects ROOT ↦ S.

Step 4a. Upon seeing a preterminal node as the current opening nonterminal, TrDec switches to using a word RNN, initialized by the last state of the encoder, to populate this empty preterminal with phrase tokens, similar to a seq2seq decoder. For example the subword units _The and _cat are generated by the word RNN, ending with a special end-of-phrase token, i.e. ⟨eop⟩.

Step 4b. While the word RNN generates subword units, the rule RNN also updates its own hidden states, as illustrated by the blue cells in Fig. 1 Right.

Step 5. After the word RNN generates ⟨eop⟩, TrDec switches back to the rule RNN to continue generating the derivation from where the tree left off. In our example, this next stage is the opening nonterminal node VP. From here, TrDec chooses the rule VP ↦ pre NP.

TrDec repeats the process above, intermingling the rule RNN and the word RNN as described, and halts when the rule RNN generates the end-of-sentence token ⟨eos⟩, completing the derivation.

We now describe the computations during the generation process discussed in § 2. At first, a source sentence x

, which is split into subwords, is encoded using a standard bi-directional Long Short-Term Memory (LSTM) network

(Hochreiter and Schmidhuber, 1997). This bi-directional LSTM outputs a set of hidden states, which TrDec will reference using an attention function (Bahdanau et al., 2015).

As discussed, TrDec uses two RNNs to generate a target parse tree. In our work, both of these RNNs use LSTMs, but with different parameters.

At any time step t in the rule RNN, there are two possible actions. If at the previous time step t−1, TrDec generated a CFG rule, then the state street is computed by:

where yCFGt−1 is the embedding of the CFG rule at time step t−1; ct−1

is the context vector computed by attention at

At any time step t, if the word RNN is invoked, its hidden state swordt is:

where streep is the hidden state of rule RNN that generated the CFG rule above the current terminal; wt−1 is the embedding of the word generated at time step t−1; and ct−1 is the attention context computed at the previous word RNN time step t−1.

At any step t

, our softmax logits are

W⋅tanh[street,swordt], where W varies depending on whether a rule or a subword unit is needed.

Unlike prior work on syntactic decoders designed for utilizing a specific type of syntactic information (Wu et al., 2017), TrDec is a flexible NMT model that can utilize any tree structure. Here we consider two categories of tree structures:

Balanced Binary Trees are syntax-free trees constructed without any linguistic guidance. We use two slightly different versions of binary trees. Version 1 (Fig. 2 Bottom Left) is constructed by recursively splitting the target sentence in half and creating left and right subtrees from the left and right halves of the sentence respectively. Version 2 (Fig. 2 Bottom Right), is constructed by applying Version 1 on a list of nodes where consecutive words are combined together. All tree nodes in both versions have the null tag. We discuss these construction processes in more detail in Appendix A.1.

We compare TrDec against three baselines: 1) seq2seq: the standard seq2seq model with attention; 2) CCG: a syntax-aware translation model that interleaves Combinatory Categorial Grammar (CCG) tags with words on the target side of a seq2seq model (Nadejde et al., 2017); 3) CCG-null: the same model with CCG, but all syntactic tags are replaced by a null tag; and 4) LIN: a standard seq2seq model that generates linearized parse trees on the target side (Aharoni and Goldberg, 2017).

). On the low-resource or-en dataset, we observe a large variance with different random seeds, so we run each model with

different seeds, and report the mean and standard deviation of these runs. TrDec-con-null and TrDec-con achieved comparable results, indicating that the syntactic labels have neither a large positive nor negative impact on TrDec. For ja-en and or-en, syntax-free TrDec outperforms all baselines. On de-en, TrDec loses to CCG-null, but the difference is not statistically significant (

We performed a variety of analyses to elucidate the differences between the translations of different models, and the most conclusive results were through analysis based on the length of the translations. First, we categorize the ja-en test set into buckets by length of the reference sentences, and compare the models for each length category. Fig. 4 shows the gains in BLEU score over seq2seq for the tree-based models. Since TrDec-con outperforms TrDec-dep for all datasets, we only focus on TrDec-con for analyzing TrDec’s performance with syntactic trees. The relative performance of CCG decreases on long sentences. However, TrDec, with both parse trees and syntax-free binary trees, delivers more improvement on longer sentences. This indicates that TrDec is better at capturing long-term dependencies during decoding. Surprisingly, TrDec-binary, which does not utilize any linguistic information, outperforms TrDec-con for all sentence length categories.

Second, Fig. 5 shows a histogram of translations by the length difference between the generated output and the reference. This provides an explanation of the difficulty of using parse trees. Ideally, this distribution will be focused around zero, indicating that the MT system is generating translations about the same length as the reference. However, the distribution of TrDec-con is more spread out than TrDec-binary, which indicates that it is more difficult for TrDec-con to generate sentences with appropriate target length. This is probably because constituency parse trees of sentences with similar number of words can have very different depth, and thus larger variance in the number of generation steps, likely making it difficult for the MT model to plan the sentence structure a-prior before actually generating the child sentences.

We propose TrDec, a novel tree-based decoder for NMT, that generates translations along with the target side tree topology. We evaluate TrDec on both linguistically-inspired parse trees and synthetic, syntax-free binary trees. Our model, when used with synthetic balanced binary trees, outperforms CCG, the existing state-of-the-art in incorporating syntax in NMT models.

The interesting result that syntax-free trees outperform their syntax-driven counterparts elicits a natural question for future work: how do we better model syntactic structure in these models? It would also be interesting to study the effect of using source-side syntax together with the target-side syntax supported by TrDec.

This material is based upon work supported in part by the Defense Advanced Research Projects Agency Information Innovation Office (I2O) Low Resource Languages for Emergent Incidents (LORELEI) program under Contract No. HR0011-15-C0114, and the National Science Foundation under Grant No. 1815287. The views and conclusions contained in this document are those of the authors and should not be interpreted as representing the official policies, either expressed or implied, of the U.S. Government. The U.S. Government is authorized to reproduce and distribute reprints for Government purposes notwithstanding any copyright notation here on.

Here we list two simple algorithms for making balanced binary trees on the target sentence. For our experiments of TrDec on binary trees, we use both algorithms to produce two versions of binary tree for each training sentence, and concatenate them as a form of data augmentation strategy.