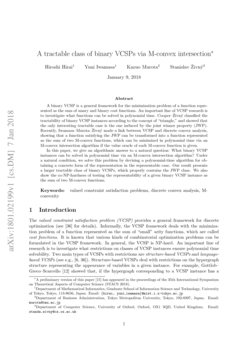 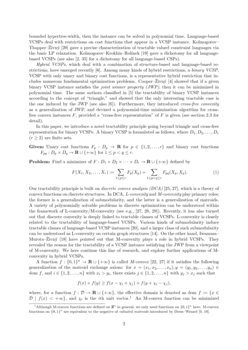 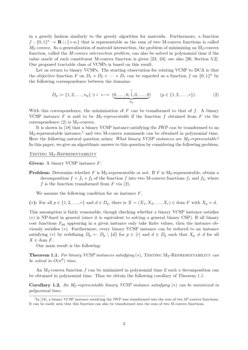 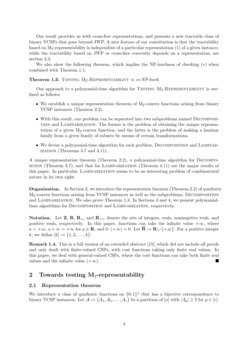 The valued constraint satisfaction problem (VCSP) provides a general framework for discrete optimization (see [36] for details). Informally, the VCSP framework deals with the minimization problem of a function represented as the sum of “small” arity functions, which are called cost functions

. It is known that various kinds of combinatorial optimization problems can be formulated in the VCSP framework. In general, the VCSP is NP-hard. An important line of research is to investigate what restrictions on classes of VCSP instances ensure polynomial time solvability. Two main types of VCSPs with restrictions are

Hybrid VCSPs, which deal with a combination of structure-based and language-based restrictions, have emerged recently [6]. Among many kinds of hybrid restrictions, a binary VCSP, VCSP with only unary and binary cost functions, is a representative hybrid restriction that includes numerous fundamental optimization problems. Cooper–Živný [4] showed that if a given binary VCSP instance satisfies the joint winner property (JWP), then it can be minimized in polynomial time. The same authors classified in [5] the tractability of binary VCSP instances according to the concept of “triangle,” and showed that the only interesting tractable case is the one induced by the JWP (see also [6]). Furthermore, they introduced cross-free convexity as a generalization of JWP, and devised a polynomial-time minimization algorithm for cross-free convex instances F, provided a “cross-free representation” of F is given (see section 2.3 for detail).

In this paper, we introduce a novel tractability principle going beyond triangle and cross-free representation for binary VCSPs. A binary VCSP is formulated as follows, where D1,D2,…,Dr (r≥2) are finite sets.

Our tractability principle is built on discrete convex analysis (DCA) [25, 27], which is a theory of convex functions on discrete structures. In DCA, L-convexity and M-convexity play primary roles; the former is a generalization of submodularity, and the latter is a generalization of matroids. A variety of polynomially solvable problems in discrete optimization can be understood within the framework of L-convexity/M-convexity (see e.g., [27, 28, 29]). Recently, it has also turned out that discrete convexity is deeply linked to tractable classes of VCSPs. L-convexity is closely related to the tractability of language-based VCSPs. Various kinds of submodularity induce tractable classes of language-based VCSP instances [20], and a larger class of such submodularity can be understood as L-convexity on certain graph structures [14]. On the other hand, Iwamasa–Murota–Živný [18] have pointed out that M-convexity plays a role in hybrid VCSPs. They revealed the reason for the tractability of a VCSP instance satisfying the JWP from a viewpoint of M-convexity. We here continue this line of research, and explore further applications of M-convexity in hybrid VCSPs.

Let us return to binary VCSPs. The starting observation for relating VCSP to DCA is that the objective function F on D1×D2×⋯×Dr can be regarded as a function f on {0,1}n by the following correspondence between the domains:

With this correspondence, the minimization of F can be transformed to that of f. A binary VCSP instance F is said to be M2-representable if the function f obtained from F via the correspondence (2) is M2-convex.

We assume the following condition for an instance F.

This assumption is fairly reasonable, though checking whether a binary VCSP instance satisfies (∗) is NP-hard in general (since it is equivalent to solving a general binary CSP). If all binary cost functions Fpq appearing in a given instance only take finite values, then the instance obviously satisfies (∗). Furthermore, every binary VCSP instance can be reduced to an instance satisfying (∗) by redefining Dp←Dp∖{d} for p∈[r] and d∈Dp such that Xp≠d for all X∈dom F.

Our main result is the following:

An M2-representable binary VCSP instance satisfying (∗) can be minimized in polynomial time.

We also show the following theorem, which implies the NP-hardness of checking (∗) when combined with Theorem 1.1.

Our approach to a polynomial-time algorithm for Testing M2-Representability is outlined as follows:

A unique representation theorem (Theorem 2.2), a polynomial-time algorithm for Decomposition (Theorem 3.7), and that for Laminarization (Theorem 4.11) are the major results of this paper. In particular, Laminarization seems to be an interesting problem of combinatorial nature in its own right.

Suppose that a binary VCSP instance F of the form (1) is given, where we assume Fpq=Fqp for distinct p,q∈[r]. The transformation of F to f based on (2) in Section 1 is formalized as follows. Choose a partition A:={A1,A2,…,Ar} of [n] with |Ap|=np(=|Dp|) and a bijective correspondence Ap→Dp. Define ai:=Fp(d) if i∈Ap corresponds to d∈Dp, aij:=Fpq(d,e) if i∈Ap and j∈Aq correspond to d∈Dp and e∈Dq, respectively, and aij:=+∞ otherwise. Then the function f in (3) is a VCSP-quadratic function of type A. Note that condition (∗) for F is equivalent to the following condition for f:

In other words, X∈Π if and only if ∅≠X∩Ap≠Ap for more than one p∈[r].

Our representation theorem (Theorem 2.2) says that an M2-convex VCSP-quadratic function is always represented as the sum of ∑X∈Lc(X)ℓX+δB and a linear function on dom δA={x∈{0,1}n∣∑i∈Apxi=1 for all p∈[r]}. To state it precisely, there are substantial complications to be resolved. In our setting, we are given a VCSP-quadratic function f of type A, which is defined only on dom f⊆dom δA. It can happen that functions ℓX and ℓY are identical on dom δA (i.e., ℓX+δA=ℓY+δA) even when X≠Y. Thus we have to make a judicious choice between them to demonstrate M2-representability of f.

To cope with such complications, we define an equivalence relation ∼ by: X∼Y⇔ℓX+δA=ℓY+δA. For F⊆Π, let F/∼ be the set of representatives (in Π/∼) of all elements in F. The equivalence relation is extended to subsets F,G of Π by: F∼G⇔F/∼=G/∼. A subset P of Π/∼ is said to be B-laminar if P∩(B/∼)=∅ and there is a B-laminar family L⊆Π with P=L/∼. A family F⊆Π is said to be B-laminarizable if F/∼ is B-laminar. For simplicity, the equivalence class of X∈Π is also denoted by X, and a member of Π/∼ is also denoted by its representative X.

Our first result is a representation theorem of M2-convex functions. For a VCSP-quadratic function f of type A, let G∞f be a multipartite graph on [n] with partition A such that edge {i,j} (i∈Ap, j∈Aq, p≠q) exists if and only if aij=+∞. Define r(G∞f) as the number of connected components of G∞f. A connected component with at least one edge is said to be non-isolated.

Let f be a VCSP-quadratic function of type A={A1,A2,…,Ar} satisfying condition (∗∗), and B be the set of non-isolated connected components of G∞f. Then f is M2-convex if and only if one of the following conditions (I) and (II) holds:

To test for M2-representability by Theorem 2.2 for the case of r(G∞f)≥r+2, we first solve the following problem Decomposition, which detects non-M2-convexity of f or obtains decomposition (4).

A VCSP-quadratic function f of type A satisfying condition (∗∗).

where P is not required to be B-laminar in general, but in case of M2-convex f, P and c should coincide, respectively, with Pf and cf in (4).

Suppose that decomposition (5) is obtained after solving Decomposition. In this case we have P at hand. Then we have to check for the B-laminarizability of an arbitrarily chosen family F⊆Π with F/∼=P. This motivates us to consider the following problem.

Laminarization is a purely combinatorial problem on a set system. Indeed, the equivalence relation ∼ can be rephrased in a combinatorial way as follows. For X∈Π, define

which is the union of Ap contributing to ℓX+δA nonlinearly. One can see the following.

Laminarization can be regarded as the problem of transforming a given family F to a laminar family by repeating the following operation: replace X∈F with [n]∖X, X∪Ap, or X∖Ap with some Ap satisfying ⟨X⟩∩Ap=∅. Figure 1 illustrates an example of the input (left) and an output (right) of Laminarization.

2.3 Relation to other problems

The tractability based on M2-representability depends solely on the function values, and is independent of how the function F is given. Indeed, an M2-representable instance F can be characterized by the existence of a Z-free instance F′ that satisfies F′(X)=F(X) for all X. This stands in sharp contrast with the tractability based on the JWP, which depends heavily on the representation of F. For example, let F(X)=∑Fp(Xp)+∑Fpq(Xp,Xq) be a binary VCSP instance satisfying the JWP. By choosing a pair of distinct p,q∈[r], d∈Dp, and α∈R arbitrarily, replace Fp(d) and Fpq(d,Xq) by Fp(d)+α and Fpq(d,Xq)−α, respectively. Then F does not change but violates the JWP in general. Our result can explore such hidden M2-convexity.

where A:={A1,A2,…,Ar} is a partition of [n] with |Ap|=|Dp|, F⊆2[n] is cross-free, and gX is a unary discrete convex function for each X∈F. Note that the polynomial-time minimization algorithm proposed in [5] for cross-free convex instances does not work unless the cross-free representation (8) is given.

We give an example of such a minimizable function. Define f:{0,1}4→R by

2.4 Proof of the characterization

In this subsection, we prove the characterization part of Theorem 2.2. That is, a VCSP-quadratic function f of type A satisfying condition (∗∗) is M2-convex if and only if f is a linear function on dom(δA+δB) (the case of r(G∞f)=r or r+1), or (4) holds for some Pf and cf (the case of r(G∞f)≥r+2).

We first review fundamental facts about a general quadratic (not necessarily VCSP-quadratic) function g:{0,1}n→¯¯¯¯¯R represented as

A function g of the form (9) satisfying condition (∗∗) is M-convex if and only if each connected component of ¯¯¯¯G∞g is a complete graph and one of the following conditions (I), (II), and (III) holds:

holds for every distinct i,j,k,l∈[n].

In particular, (II) or (III) holds if and only if g is represented as g=δg+(linear function).

Quadratic coefficients (aij)i,j are called B-coefficients if [aij=+∞⇔i,j∈B for some B∈B]. The following is a variation of a well-known technique (Farris transform) in phylogenetics [33] to transform a tree metric to a ultrametric, and follows from the validity of Algorithm I in [17].

We now return to VCSP-quadratic functions. The following is a key proposition.

Let f be a VCSP-quadratic function of type A satisfying condition (∗∗), and B be the set of non-isolated connected components (as a set of nodes) of G∞f. Then f is M2-convex if and only if one of the following conditions (I) and (II) holds: