A total uncertainty measure for D numbers based on belief intervals 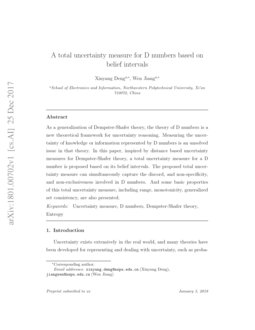 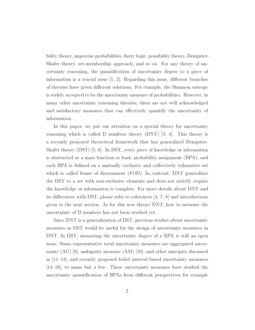 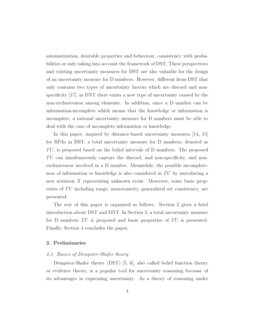 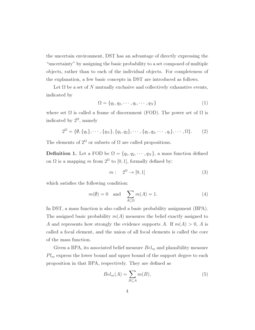 Uncertainty exists extensively in the real world, and many theories have been developed for representing and dealing with uncertainty, such as probability theory, imprecise probabilities, fuzzy logic, possibility theory, Dempster-Shafer theory, set-membership approach, and so on. For any theory of uncertainty reasoning, the quantification of uncertainty degree to a piece of information is a crucial issue

klir1991generalized ; klir2005uncertainty . Regarding this issue, different branches of theories have given different solutions. For example, the Shannon entropy is widely accepted to be the uncertainty measure of probabilities. However, in many other uncertainty reasoning theories, there are not well acknowledged and satisfactory measures that can effectively quantify the uncertainty of information.

In this paper, we put our attention on a special theory for uncertainty reasoning which is called D numbers theory (DNT) deng2012DJICS99 ; deng2017d09186 . This theory is a recently proposed theoretical framework that has generalized Dempster-Shafer theory (DST) Dempster1967 ; Shafer1976 . In DST, every piece of knowledge or information is abstracted as a mass function or basic probability assignment (BPA), and each BPA is defined on a mutually exclusive and collectively exhaustive set which is called frame of discernment (FOD). In contrast, DNT generalizes the DST to a set with non-exclusive elements and does not strictly require the knowledge or information is complete. For more details about DNT and its differences with DST, please refer to references xydeng2017DNCR ; deng2014environmental412 ; deng2017d09186 and introductions given in the next section. As for this new theory DNT, how to measure the uncertainty of D numbers has not been studied yet.

In this paper, inspired by distance-based uncertainty measures yang2016new94 ; AnImprovedAPIN2017 for BPAs in DST, a total uncertainty measure for D numbers, denoted as TU, is proposed based on the belief intervals of D numbers. The proposed TU can simultaneously capture the discord, and non-specificity, and non-exclusiveness involved in a D number. Meanwhile, the possible incompleteness of information or knowledge is also considered in TU by introducing a new notation X representing unknown event. Moreover, some basic properties of TU including range, monotonicity, generalized set consistency, are presented.

The rest of this paper is organized as follows. Section 2 gives a brief introduction about DST and DNT. In Section 3, a total uncertainty measure for D numbers TU is proposed and basic properties of TU is presented. Finally, Section 4 concludes the paper.

Dempster-Shafer theory (DST) Dempster1967 ; Shafer1976 , also called belief function theory or evidence theory, is a popular tool for uncertainty reasoning because of its advantages in expressing uncertainty. As a theory of reasoning under the uncertain environment, DST has an advantage of directly expressing the “uncertainty” by assigning the basic probability to a set composed of multiple objects, rather than to each of the individual objects. For completeness of the explanation, a few basic concepts in DST are introduced as follows.

Let Ω be a set of N mutually exclusive and collectively exhaustive events, indicated by

where set Ω is called a frame of discernment (FOD). The power set of Ω is indicated by 2Ω, namely

The elements of 2Ω or subsets of Ω are called propositions.

which satisfies the following condition:

Given a BPA, its associated belief measure Belm and plausibility measure Plm express the lower bound and upper bound of the support degree to each proposition in that BPA, respectively. They are defined as

Obviously, Plm(A)≥Belm(A) for each A⊆Ω, and [Belm(A),Plm(A)] is called the belief interval of A in m.

D numbers theory (DNT) is a new theoretical framework for uncertainty reasoning which generalizes the DST from two aspects: on one hand, the elements within FOD are not required to be mutually exclusive in DNT; on the other hand, the providing information in DNT can be incomplete in contrast to ∑m(⋅)=1 in DST. For more theoretical details about DNT and its recent advances, please refer to literatures deng2012DJICS99 ; xydeng2017DNCR ; deng2017d09186 . Furthermore, some applications of DNT can be found in references fan2016hybrid44 ; liu2014failure4110 ; xiao2016intelligent3713518 ; wang2017modifiedIJFS ; deng2014environmental412 ; Deng2017Fuzzy2086 . A few of basic concepts in DNT are introduced as follows deng2017d09186 .

Let Θ be a nonempty finite set Θ={θ1,θ2,⋯,θN}, a D number is a mapping formulated by

where ∅ is the empty set and B is a subset of Θ.

It is worthy noting that a D number can be defined on a set with non-exclusive elements, which means that any pair of elements in Θ, for example θi,θj∈Θ, are not required to be strictly exclusive, i.e. θi∩θj≠∅. Here, we still call Θ as a FOD, but should note that a FOD in DNT is a set consisting of non-exclusive elements. Besides, according to Definition 2.2, in a D number the information is not required to be complete. If ∑B⊆ΘD(B)=1, we say that the D number is information-complete. By contrast, if ∑B⊆ΘD(B)<1 the D number is information-incomplete. In order to transform a D number with incomplete information to the information-complete case, a new notation X is imported to represent the unknown event, and there is not any restriction for the relationship between X and Θ. So, a new definition about D numbers is given as below. A D number defined on a nonempty finite set Θ={θ1,θ2,⋯,θN} and unknown event X is a mapping D:2Θ∪X→[0,1] satisfying

In the latter definition of D numbers, i.e. Definition 2.2, X represents the unknown (or incomplete) part in a D number. Regarding the requirement of non-exclusiveness in DNT, a membership function is developed to measure the non-exclusive degrees in Θ∪X.

Given Bi,Bj∈2Θ∪X, the non-exclusive degree between Bi and Bj is characterized by a mapping u¬E:

where 0≤p≤1. If letting the exclusive degree between Bi and Bj be denoted as uE, then uE=1−u¬E.

According to Definition 2.2, the non-exclusive degree between Bi and Bj is 1 if Bi and Bj have intersections, otherwise u¬E(Bi,Bj) is p taking a value from [0,1]. Obviously, if u¬E(Bi,Bj)=0 for any Bi∩Bj=∅, the FOD Θ in DNT is degenerated to classical FOD in DST.

In order to express the bound of uncertainty in a D number, in a very recent study deng2017d09186 we have developed a belief measure and a plausibility measure for D numbers.

Let D represent a D number defined on Θ∪X where X represents unknown event, for any proposition A⊆Θ∪X, its belief measure Bel:2Θ∪X→[0,1] is defined as

and its plausibility measure Pl:2Θ∪X→[0,1] is defined as

For the above definition, because u¬E(B,A)=1 for B∩A≠∅, the plausibility measure Pl can also be written as

As same as DST, [Bel(A),Pl(A)] is called the belief interval of A in DNT, which expresses the lower bound and upper bound of support degree to proposition A. And it is easy to find that the Bel and Pl for D numbers will degenerate to classical belief measure and plausibility measure in DST if the associated D number is a BPA in fact.

In this paper, a belief interval based total uncertainty measure, called TU, is proposed for D numbers. This idea of TU is inspired by distance-based uncertainty measures yang2016new94 ; AnImprovedAPIN2017 for mass functions in DST.

Let D represent a D number defined on Θ∪X where Θ={θ1,θ2,⋯,θN} and X expresses the unknown part in D, the total uncertainty of D is

and U(X) is a function associated with the cardinality of X and expresses the overall uncertainty in X, Bel and Pl are the belief measure and plausibility measure of D numbers, respectively.

The underlying assumption of this total uncertainty measure is that an element in Θ∪X has the largest uncertainty degree if its belief interval is [0,1]. Let us analyze the TU:

Based on the above analysis, for the sake of simplicity the total uncertainty of a D number, TU, can be represented by a tuple (KU,UU), as graphically shown in Figure 2, where UU is a coefficient with respect to U(X). Some basic properties of the proposed TU are given as follows.

Generalized set consistency. When a set A, A⊆Θ exists such that D(A)=1 then

where Θ∖A is the difference between Θ and A.

This paper has studied the issue of uncertainty quantification of knowledge or information in DNT. At first, three types of uncertainty factors, namely discord, and non-specificity, and non-exclusiveness, are identified for D numbers. Then, on the basis of our previous defined belief intervals for D numbers and distance based uncertainty measures for DST, a total uncertainty measure TU is proposed in the framework of D numbers theory. At last, some basic properties of TU are presented. In the future study, on one hand other properties of TU will be investigated, on the other hand the applications of the proposed TU are given more attention.