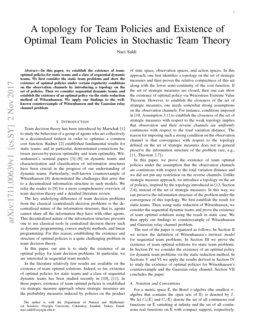 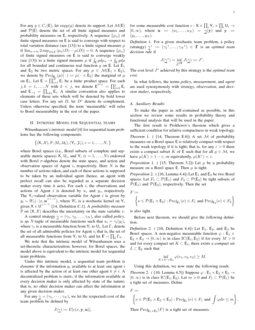 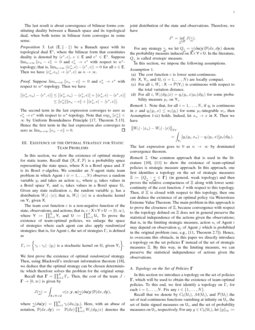 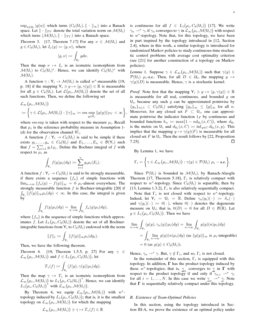 Team decision theory has been introduced by Marschak [1] to study the behaviour of a group of agents who act collectively in a decentralized fashion in order to optimize a common cost function. Radner [2] established fundamental results for static teams, and in particular, demonstrated connections between person-by-person optimality and team-optimality. Witsenhausen’s seminal papers [3, 4, 5, 6, 7, 8] on dynamic teams and characterization and classification of information structures have been crucial in the progress of our understanding of dynamic teams. Particularly, well-known counterexample of Witsenhausen [8] demonstrated the challenges that arise due to a decentralized information structure in such models. We refer the reader to [9] for a more comprehensive overview of team decision theory and a detailed literature review.

In this paper, our aim is to study the existence of an optimal policy for team decision problems. In particular, we are interested in sequential team models.

In the literature relatively few results are available on the existence of team optimal solutions. Indeed, so far, existence of optimal policies for static teams and a class of sequential dynamic teams has been studied recently in [10, 11]

In this paper, we prove the existence of team optimal policies under the assumption that the observation channels are continuous with respect to the total variation distance and we did not put any restriction on the reverse channels. Unlike strategic measure approach, we introduce a topology on the set of policies, inspired by the topology introduced in [12, Section 2.4], instead of the set of strategic measures. In this way, we can preserve the information structure of the problem under the convergence of this topology. We first establish the result for static teams. Then, using static reduction of Witsenhausen, we consider the sequential dynamic teams and prove the existence of team optimal solutions using the result in static case. We then apply our findings to counterexample of Witsenhausen and Gaussian relay channel problem.

where Borel spaces (i.e., Borel subsets of complete and separable metric spaces) X, Ui, and Yi (i=1,…,N) endowed with Borel σ-algebras denote the state space, and action and observation spaces of Agent i, respectively. Here N is the number of actions taken, and each of these actions is supposed to be taken by an individual agent (hence, an agent with perfect recall can also be regarded as a separate decision maker every time it acts). For each i, the observations and actions of Agent i is denoted by ui and yi, respectively. The Yi-valued observation variable for Agent i is given by yi∼Wi(⋅|x,u[1:i−1]), where Wi is a stochastic kernel on Yi given X×U[1:i−1] [14, Definition C.1]. A probability measure P on (X,X) describes the uncertainty on the state variable x.

For a given stochastic team problem, a policy (strategy) γ––∗:=(γ1∗,…,γN∗)∈Γ is an optimal team decision rule if

The cost level J∗ achieved by this strategy is the optimal team cost.

In what follows, the terms policy, measurement, and agent are used synonymously with strategy, observation, and decision maker, respectively.

To make the paper as self-contained as possible, in this section we review some results in probability theory and functional analysis that will be used in the paper.

The first result is Prokhorov’s theorem which gives a sufficient condition for relative compactness in weak topology.

([14, Theorem E.6]) A set M of probability measures on a Borel space E is relatively compact with respect to the weak topology if it is tight; that is, for any ε>0 there exists a compact subset K of E such that for all μ∈M, we have μ(K)>1−ε, or equivalently, μ(Kc)<ε.

Before next theorem, we should give the following definition.

Using this definition, we now state the following result.

Then ProjE1×E2(F) is a tight set of measures.

The last result is about convergence of bilinear forms constituting duality between a Banach space and its topological dual, when both terms in bilinear form converges in some sense.

Iii Existence of the Optimal Strategy for Static Team Problems

In this section, we show the existence of optimal strategy for static teams. Recall that (X,X,P) is a probability space representing the state space, where X is a Borel space and X is its Borel σ-algebra. We consider an N-agent static team problem in which Agent i (i=1,…,N

The team cost function c is a non-negative function of the state, observations, and actions; that is, c:X×Y×U→[0,∞), where Y\coloneqq∏Ni=1Yi and U\coloneqq∏Ni=1Ui. To prove the existence of team-optimal policies, we enlarge the space of strategies where each agent can also apply randomized strategies; that is, for Agent i, the set of strategies Γi is defined as

We first prove the existence of optimal randomized strategy. Then, using Blackwell’s irrelevant information theorem [18], we deduce that the optimal strategy can be chosen deterministic which therefore solves the problem for the original setup.

denotes the joint distribution of the state and observations. Therefore, we have

For any strategy γ––, we let Qγ––=γ––(du|y)P(dx,dy) denote the probability measure induced on X×Y×U. In the literature, Qγ–– is called strategic measure.

In this section, we impose the following assumptions.

The last expression goes to 0 as n→∞ by dominated convergence theorem.

One common approach that is used in the literature [10, 11] to show the existence of team-optimal policies is strategic measure approach. In this approach, one first identifies a topology on the set of strategic measures Ξ\coloneqq{Qγ––:γ––∈Γ} (in general, weak topology) and then proves the relative compactness of Ξ along with lower semi-continuity of the cost function J with respect to this topology. Then, if Ξ is closed with respect to this topology, then one can deduce the existence of an optimal policy via Weierstrass Extreme Value Theorem. The main problem in this approach is to prove the closeness of Ξ, because convergence with respect to the topology defined on Ξ does not in general preserve the statistical independence of the actions given the observations; that is, in the limiting strategic measure, action ui of Agent i may depend on observation yj of Agent j which is prohibited in the original problem (see, e.g., [11, Theorem 2.7]). Hence, to overcome this obstacle, in this paper we directly introduce a topology on the set policies Γ instead of the set of strategic measures Ξ. By this way, in the limiting measure, we can preserve the statistical independence of actions given the observations.

Iii-a Topology on the Set of Policies Γ

In this section we introduce a topology on the set of policies Γ, which will be used to obtain the existence of team-optimal policies. To this end, we first identify a topology on Γi for each i=1,…,N. Fix any i∈{1,…,N}.

A function γ:Yi→M(Ui) is called w∗-measurable [19, p. 18] if the mapping Yi∋y↦⟨g,γ(y)⟩∈R is measurable for all g∈C0(Ui). Let L(μi,M(Ui)) denote the set of all such functions. Then, we define the following set

where esssup is taken with respect to the measure μi. Recall that μi is the reference probability measure in Assumption 1-(d) for the observation channel Wi.

where {fn} is the sequence of simple functions which approximates f. Let L1(μi,C0(Ui)) denote the set of all Bochner-integrable functions from Yi to C0(Ui) endowed with the norm

Then, we have the following theorem.

is continuous for all f∈L1(μi,C0(Ui)) [17]. We write γn⇀∗γ, if γn converges to γ in L∞(μi,M(Ui)) with respect to w∗-topology. Note that, for this topology, we have been in part inspired by the topology introduced in [12, Section 2.4], where in this work, a similar topology is introduced for randomized Markov policies to study continuous-time stochastic control problems with average cost optimality criterion (see [21] for another construction of a topology on Markov policies).

Note first that the mapping Yi∋y↦⟨g,γ(y)⟩∈R is measurable for all real, continuous, and bounded g on Ui, because any such g can be approximated pointwise by {gn}n≥1⊂C0(Ui) satisfying ∥gn∥∞≤∥g∥∞ for all n. Moreover, for any closed set F⊂Ui, one can approximate pointwise the indicator function 1F by continuous and bounded functions hn\coloneqqmax(1−ndUi(x,C)), where dUi is the metric on Ui and dUi(x,C)\coloneqqinfy∈CdUi(x,y). This implies that the mapping y↦γ(y)(F) is measurable for all closed set F in Ui. Then the result follows by [22, Proposition 7.25]. ∎

Since P(Ui) is bounded in M(Ui), by Banach-Alaoglu Theorem [17, Theorem 5.18], Γi is relatively compact with respect to w∗-topology. Since C0(Ui) is separable, then by [13, Lemma 1.3.2], Γi is also relatively sequentially compact.

Hence, γn⇀∗γ. But, γ∉Γi, and so, Γi is not closed.

In this section, using the topology introduced in Section III-A, we prove the existence of an optimal policy under the Assumption 1 and the assumption below. For any L>0, we define

For each i=1,…,N, we define SiL\coloneqqProjYi×Ui(SL).

Before we continue with the proof, we will give several conditions that imply Assumption 2.

Suppose either of the following conditions hold:

Recall that Cc(X×Y×U) denotes the set of real continuous functions on X×Y×U with compact support. For any g∈Cc(X×Y×U), we define

We first prove the following result.

Fix any g∈Cc(X×Y×U). Then by Stone-Weierstrass Theorem [23, Lemma 6.1], g can be uniformly approximated by functions of the form

Let K\coloneqqsupp(r) which is a compact subset of X as r∈Cc(X). Then we have

Then the jth term can be written as

Define, for each x∈X, the function