A Topological Proof of Sklar's Theorem in Arbitrary Dimensions

We prove Sklar's theorem in infinite dimensions via a topological argument and the notion of inverse systems. 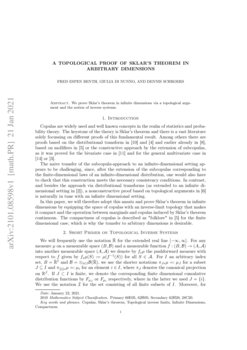 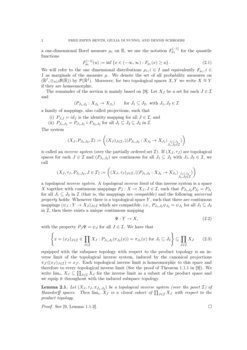 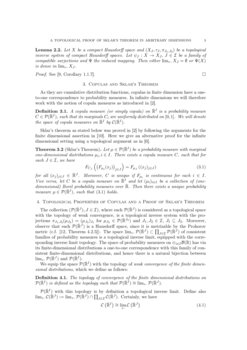 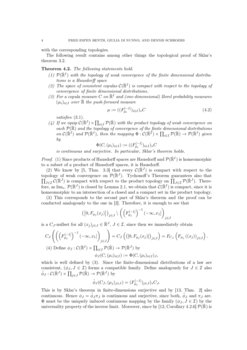 Copulas are widely used and well known concepts in the realm of statistics and probability theory. The keystone of the theory is Sklar’s theorem and there is a vast literature solely focussing on different proofs of this fundamental result. Among others there are proofs based on the distributional transform in

[RÜS09] and [DEH09] and earlier already in [MS75], based on mollifiers in [DFS12] or the constructive approach by the extension of subcopulas, as it was proved for the bivariate case in [SS74] and for the general multivariate case in [SKL96] or [CT02].

In this paper, we will therefore adopt this ansatz and prove Sklar’s theorem in infinite dimensions by equipping the space of copulas with an inverse-limit topology that makes it compact and the operation between marginals and copulas induced by Sklar’s theorem continuous. The compactness of copulas is described as "folklore" in [DFS12] for the finite dimensional case, which is why the transfer to arbitrary dimensions is desirable.

We will frequently use the notation ¯R for the extended real line [−∞,∞]. For any measure μ on a measurable space (B,B) and a measurable function f:(B,B)→(A,A) into another measurable space (A,A) we denote by f∗μ the pushforward measure with respect to f given by f∗μ(S):=μ(f−1(S)) for all S∈A. For I an arbitrary index set, B=¯RI and B=⊗i∈IB(¯R), we use the shorter notations πJ∗μ=:μJ for a subset J⊆I and π{i}∗μ=:μi for an element i∈I, where πJ denotes the canonical projection on RJ. If J⊂I

is finite, we denote the corresponding finite dimensional cumulative distribution functions by

FμJ or Fμi respectively, where in the latter we used J={i}. We use the notation I for the set consisting of all finite subsets of I. Moreover, for a one-dimensional Borel measure μi on R, we use the notation F[−1]μi

for the quantile functions

We will refer to the one dimensional distributions μi,i∈I and equivalently Fμi,i∈I as marginals of the measure μ

. We denote the set of all probability measures on

(¯RI,⊗i∈IB(¯R)) by P(¯RI). Moreover, for two topological spaces X,Y we write X≅Y if they are homeomorphic.

The remainder of the section is mainly based on [RZ10]. Let XJ be a set for each J∈I and

a family of mappings, also called projections, such that

is called an inverse system (over the partially ordered set I). If (XJ,τJ) are topological spaces for each J∈I and (PJ1,J2) are continuous for all J1⊆J2 with J1,J2∈I, we call

with the property PJΨ=ψJ for all J∈I. We have that

Let (XJ,τJ,πJ1,J2) be a topological inverse system (over the poset I) of Hausdorff spaces. Then lim←XJ is a closed subset of ∏J∈IXJ with respect to the product topology.

As they are cumulative distribution functions, copulas in finite dimension have a one-to-one correspondence to probability measures. In infinite dimensions we will therefore work with the notion of copula measures as introduced in [BDS20].

A copula measure (or simply copula) on ¯RI is a probability measure C∈P(¯RI), such that its marginals Ci

are uniformly distributed on

Sklar’s theorem as stated below was proved in [BDS20] by following the arguments for the finite dimensional assertion in [RÜS09]. Here we give an alternative proof for the infinite dimensional setting using a topological argument as in [DFS13].

Let μ∈P(¯RI) be a probability measure with marginal one-dimensional distributions μi,i∈I. There exists a copula measure C, such that for each J∈I, we have

for all (xj)j∈J∈¯RJ. Moreover, C is unique if Fμi is continuous for each i∈I. Vice versa, let C be a copula measure on ¯RI and let (μi)i∈I be a collection of (one-dimensional) Borel probability measures over ¯R. Then there exists a unique probability measure μ∈P(¯RI), such that (3.1) holds.

4. Topological Properties of Copulas and a Proof of Sklar’s Theorem

The collection (P(¯RJ),J∈I), where each P(¯RJ) is considered as a topological space with the topology of weak convergence, is a topological inverse system with the projections πJ1,J2(μJ2)=(μJ2)J1 for μJ2∈P(¯RJ2) and J1,J2∈I, J1⊆J2. Moreover, observe that each P(¯RJ) is a Hausdorff space, since it is metrizable by the Prohorov metric (c.f. [SS05, Theorem 4.2.5]). The space lim←P(¯RJ)⊂∏J∈IP(¯RJ) of consistent families of probability measures is a topological inverse limit, equipped with the corresponding inverse limit topology. The space of probability measures on ⊗i∈IB(R) has via its finite-dimensional distributions a one-to-one correspondence with this family of consistent finite-dimensional distributions, and hence there is a natural bijection between lim←P(¯RJ) and P(¯RI).

We equip the space P(¯RI) with the topology of weak convergence of the finite dimensional distributions, which we define as follows:

The topology of convergence of the finite dimensional distributions on P(¯RI) is defined as the topology such that P(¯RI)≅lim←P(¯RJ).

P(¯RI) with this topology is by definition a topological inverse limit. Define also lim←C(¯RJ):=lim←P(¯RJ)∩∏J∈IC(¯RJ). Certainly, we have

with the corresponding topologies.

The following result contains among other things the topological proof of Sklar’s theorem 3.2.

(3) This corresponds to the second part of Sklar’s theorem and the proof can be conducted analogously to the one in [BDS20]. Therefore, it is enough to see that

which is well defined by (3). Since the finite-dimensional distributions of a law are consistent, (ϕJ,J∈I) forms a compatible family. Define analogously for J∈I also by

This is by Sklar’s theorem in finite-dimensions surjective and by [SEM04, Thm. 2] also continuous. Hence ϕJ=~ϕJπJ is continuous and surjective, since both, ~ϕJ and πJ are. Φ must be the uniquely induced continuous mapping by the family (ϕJ,J∈I) by the universality property of the inverse limit. Moreover, since by [SS05, Corollary 4.2.6] P(¯R) is compact and by (2) also C(¯RI) is compact, we have that C(¯RI)×∏i∈IP(¯R) is compact by Tychonoff’s theorem. The continuity of Φ implies therefore that Φ(C(¯RI)×∏i∈IP(¯R)) is compact, hence closed. Since moreover Lemma 2.2 implies that Φ(C(¯RI)×∏i∈IP(¯R)) is dense, we obtain that Φ is surjective and therefore also the first part of Sklar’s theorem holds. The uniqueness of the copulas in the case of continuous marginals follows immediately by Sklar’s theorem in finite dimensions via the uniqueness of the finite dimensional distribution of the corresponding copula measure. ∎

Observe that since P(¯RJ) is a locally convex Hausdorff space with respect to the topology of weak convergence for each J∈I, we obtain that also the inverse limit P(¯RI) is locally convex, as it is isomorphic to a subset of the product ∏J∈IP(RJ) of locally convex Hausdorff spaces. Hence, as mentioned for instance in [DS15, p.30], since C(RI) is convex, we have that it is the closure of its extremal points by the Krein-Milman theorem. As mentioned in [BS91] this implies that

where ext(C(RI)) denotes the set of extremal points of C(RI) and g:C(RI)↦R is a convex function.

This research was funded within the project STORM: Stochastics for Time-Space Risk Models, from the Research Council of Norway (RCN). Project number: 274410.