A Theory of Lazy Imperative Timing

We present a theory of lazy imperative timing. 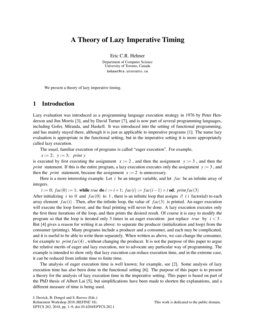 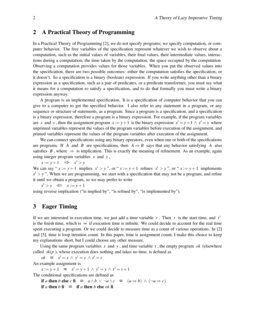 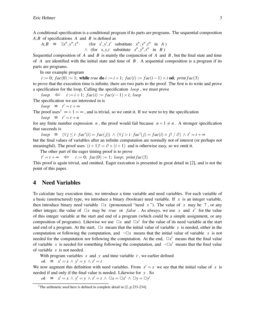 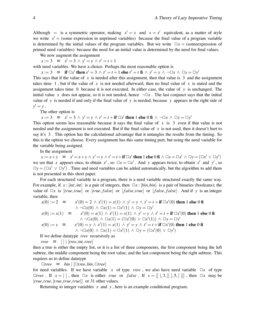 The application of precision time protocol on EAST timing system

A Brief Overview of the KTA WCET Tool

In this paper we extend the concept of the traditional transactor, which...
Li-Chun Chen, et al. ∙

Tik-Tok: The Utility of Packet Timing in Website Fingerprinting Attacks

Lazy evaluation was introduced as a programming language execution strategy in 1976 by Peter Henderson and Jim Morris [4], and by David Turner [8], and is now part of several programming languages, including Gofer, Miranda, and Haskell. It was introduced into the setting of functional programming, and has mainly stayed there, although it is just as applicable to imperative programs [2]. The name “lazy evaluation” is appropriate in the functional setting, but in the imperative setting it is more appropriately called “lazy execution”.

The usual, familiar execution of programs is called “eager execution”. For example,

Here is a more interesting example. Let  i  be an integer variable, and let  fac  be an infinite array of integers.

After initializing  i  to  0  and  fac(0)  to  1 , there is an infinite loop that assigns  i!  ( i  factorial) to each array element  fac(i) . Then, after the infinite loop, the value of  fac(3)  is printed. An eager execution will execute the loop forever, and the final printing will never be done. A lazy execution executes only the first three iterations of the loop, and then prints the desired result. Of course it is easy to modify the program so that the loop is iterated only 3 times in an eager execution: just replace  true  by  i<3 . But [5] gives a reason for writing it as above: to separate the producer (initialization and loop) from the consumer (printing). Many programs include a producer and a consumer, and each may be complicated, and it is useful to be able to write them separately. When written as above, we can change the consumer, for example to  printfac(4) , without changing the producer. It is not the purpose of this paper to argue the relative merits of eager and lazy execution, nor to advocate any particular way of programming. The example is intended to show only that lazy execution can reduce execution time, and in the extreme case, it can be reduced from infinite time to finite time.

2 A Practical Theory of Programming

We can connect specifications using any binary operators, even when one or both of the specifications are programs. If  A  and  B  are specifications, then  A⇒B  says that any behavior satisfying  A  also satisfies  B , where  ⇒  is implication. This is exactly the meaning of refinement. As an example, again using integer program variables  x  and  y ,

using reverse implication (“is implied by”, “is refined by”, “is implemented by”).

If we are interested in execution time, we just add a time variable  t . Then  t  is the start time, and  t′  is the finish time, which is  ∞  if execution time is infinite. We could decide to account for the real time spent executing a program. Or we could decide to measure time as a count of various operations. In [3] and [6], time is loop iteration count. In this paper, time is assignment count; I make this choice to keep my explanations short, but I could choose any other measure.

Using the same program variables  x  and  y , and time variable  t , the empty program  ok  (elsewhere called  skip ), whose execution does nothing and takes no time, is defined as

An example assignment is

The conditional specifications are defined as

In our example program

to prove that the execution time is infinite, there are two parts to the proof. The first is to write and prove a specification for the loop. Calling the specification  loop , we must prove

for any finite number expression  n , the proof would fail because  n+1≠n . A stronger specification that succeeds is

but the final values of variables after an infinite computation are normally not of interest (or perhaps not meaningful). The proof uses  (i+1)!=i!×(i+1)  and is otherwise easy, so we omit it.

The other part of the eager timing proof is to prove

This proof is again trivial, and omitted. Eager execution is presented in great detail in [3], and is not the point of this paper.

With program variables  x  and  y  and time variable  t , we earlier defined

We now augment this definition with need variables. From  x′=x  we see that the initial value of  x  is needed if and only if the final value is needed. Likewise for  y . So

Although  =  is a symmetric operator, making  x′=x  and  x=x′  equivalent, as a matter of style we write  x′= (some expression in unprimed variables)  because the final value of a program variable is determined by the initial values of the program variables. But we write  □x= (some expression of primed need variables)  because the need for an initial value is determined by the need for final values.

We now augment the assignment

with need variables. We have a choice. Perhaps the most reasonable option is

The other option is

This option seems less reasonable because it says the final value of  x  is  3  even if that value is not needed and the assignment is not executed. But if the final value of  x  is not used, then it doesn’t hurt to say it’s  3 . This option has the calculational advantage that it untangles the results from the timing. So this is the option we choose. Every assignment has this same timing part, but using the need variable for the variable being assigned.

If we define datatype  tree  recursively as

Returning to integer variables  x  and  y , here is an example conditional program.

We see that  x  occurs in the right sides of both  x′  and  y′ , so  □x=(□x′ ∨ □y′) . We see that  y  occurs in the right side of only  y′ , so  □y=□y′ . We have added the need variables in accordance with the rules, as we would expect a compiler to do. But we can do better by using some algebra. Notice that  if x=0 then x else 0 fi=0 , so the results part can be stated equivalently as

which results in the need part

We find that  □x  has been strengthened, making lazier execution possible. But a compiler would not be expected to make this improvement.

At the end of an entire program, we put  stop , defined as

Like  ok , its execution does nothing and takes no time. Since this is the end of the whole program,  ¬□x ∧ ¬□y  says there is no further need for the values of any variables.

We now have all the theory we need. Let us apply it to our example program

To begin, we need a specification for the loop, which we call  loop . With a number on each line for reference,

Lines 0 and 1 are the same as in the stronger version of the eager specification presented earlier. For eager execution lines 0 and 1 are not necessary because the loop execution is nonterminating, but for lazy execution they are necessary. Line 2 is the timing. It says that if the final value of  i  is needed, then the loop takes forever; otherwise, if the final value of  fac(j)  is needed for any  j≥i , then the loop time is twice the difference between the largest such  j  and  i , because there are two assignments in each iteration; otherwise the loop takes  0  time because it will not be executed222I confess that I did not get the lazy  loop  specification right the first time I wrote it; my error was in the time line 2. The  loop  specification is used in two proofs (below), and any error prevents one of the proofs from succeeding. That is how an error is discovered. Fortunately, the way the proof fails gives guidance on how to correct the specification.. Line 3 says that the loop needs an initial value for  i  if and only if a final value of  fac(j)  is needed for any  j>i . Line 4 says that for  j<i ,  fac(j)  must have an initial value if and only if its final value is needed. Line 5 says that  fac(i)  needs an initial value if and only if the final value of  fac(j)  is needed for any  j≥i . And line 6 says that for  j>i , the initial value of  fac(j)  is not needed. In this paragraph, the words “initial” and “final” are used to mean relative to the entire loop execution: initially before the first iteration (if there is one), and finally after the last iteration (if there is one).

There can be more than one specification that’s correct in the sense that it makes the proofs succeed. For example, if the type of variable  i  allows it, we could add the line  i′=∞ , and then line 3 would be  □i=(□i′ ∨ ∃j>i⋅□fac′(j)) , but since line 2 says that if we need  i′  then execution time is infinite, these additions really don’t matter.

The first proof is the loop refinement. We must prove

For the proof, we first replace each of the sequentially composed programs with their binary equivalent, including time and need variables. Then we use the sequential composition rule, and use one-point laws to eliminate the quantifiers. And we make any simplifications we can along the way. The proof is in the Appendix.

Then to prove that the overall execution time is  9 , we must prove

For  printfac(3) , we suppose it is like an assignment  print:=fac(3) , except that  print  is not a program variable. This proof is also in the Appendix.

We have presented a theory of lazy imperative timing. The examples presented are small enough so we know what the right answers are without using the theory; that enables us to see whether the theory is working. But the theory is not limited to small, easy examples.

Proof of the loop refinement

starting with the right side:

Replace each statement by its definition.

starting with the right side:

Replace each statement by its definition.