A Theil-like Class of Inequality Measures, its Asymptotic Normality Theory and Applications

In this paper, we consider a coherent theory about the asymptotic representations for a family of inequality indices called Theil-Like Inequality Measures (TLIM), within a Gaussian field. The theory uses the functional empirical process approach. We provide the finite-distribution and uniform asymptotic normality of the elements of the TLIM class in a unified approach rather than in a case by case one. The results are then applied to some UEMOA countries databases. 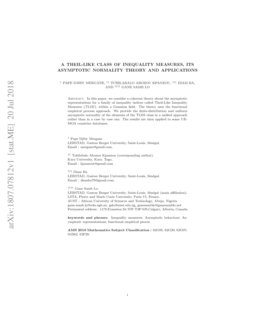 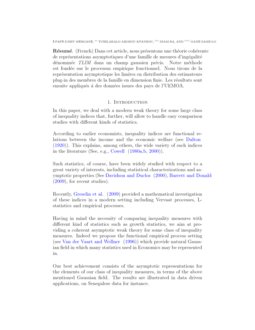 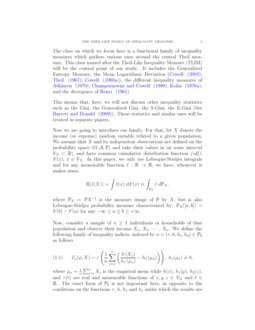 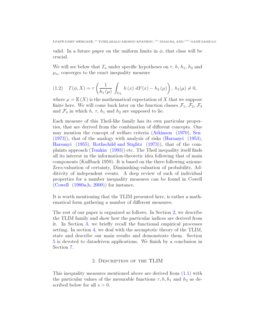 In this paper, we consider the Zenga index, one of the most recent inequ...
Tchilabalo Abozou Kpanzou, et al. ∙

In this paper we provide the asymptotic theory of the general phi-diverg...
Ba Amadou Diadie, et al. ∙

On one hand, a large class of inequality measures, which includes the ge...
Tchilabalo Abozou Kpanzou, et al. ∙

About the lower bounds for the multiple testing problem

Given an observed random variable, consider the problem of recovering it...
Yannick Baraud, et al. ∙

Unbottling the Gini: New Tools from an Old Concept

The Gini index signals only the dispersion of the distribution and is no...
Mario Schlemmer, et al. ∙

In this paper, we deal with a modern weak theory for some large class of inequality indices that, further, will allow to handle easy comparison studies with different kinds of statistics.

According to earlier economists, inequality indices are functional relations between the income and the economic welfare (see Dalton (1920)). This explains, among others, the wide variety of such indices in the literature (See, e.g., Cowell (1980a, b, 2000)).

Such statistics, of course, have been widely studied with respect to a great variety of interests, including statistical characterizations and asymptotic properties (See Davidson and Duclos (2000), Barrett and Donald (2009), for recent studies).

Recently, Greselin et al. (2009) provided a mathematical investigation of these indices in a modern setting including Vervaat processes, L-statistics and empirical processes.

Having in mind the necessity of comparing inequality measures with different kind of statistics such as growth statistics, we aim at providing a coherent asymptotic weak theory for some class of inequality measures. Indeed we propose the functional empirical process setting (see Van der Vaart and Wellner (1996)) which provide natural Gaussian field in which many statistics used in Economics may be represented in.

Our best achievement consists of the asymptotic representations for the elements of our class of inequality measures, in terms of the above mentioned Gaussian field. The results are illustrated in data driven applications, on Senegalese data for instance.

The class on which we focus here is a functional family of inequality measures which gathers various ones around the central Theil measure. This class named after the Theil-Like Inequality Measure (TLIM) will be the central point of our study. It includes the Generalized Entropy Measure, the Mean Logarithmic Deviation (Cowell (2003); Theil (1967); Cowell (1980a)), the different inequality measures of Atkinson (1970), Champernowne and Cowell (1998), Kolm (1976a), and the divergence of Renyi (1961).

This means that, here, we will not discuss other inequality statistics such as the Gini, the Generalized Gini, the S-Gini, the E-Gini (See Barrett and Donald (2009)). Those statistics and similar ones will be treated in separate papers.

Now we are going to introduce our family. For that, let X

denote the income (or expense) random variable related to a given population. We assume that

and its independent observations are defined on the probability space

(Ω,A,P) and take their values in on some interval VX⊂R∗+

and have common cumulative distribution function

(cdf), F(x), x∈VX. In this paper, we only use Lebesgue-Stieljes integrals and for any measurable function ℓ:R→R, we have, whenever it makes sense,

Now, consider a sample of n≥1 individuals or households of that population and observe their income X1, X2, ⋯, Xn. We define the following family of inequality indices, indexed by ϕ=(τ,h,h1,h2)∈P0 as follows

where μn=1n∑nj=1Xj is the empirical mean while h(x), h1(y), h2(z), and τ(t) are real and measurable functions of x,y,z∈VX and t∈R. The exact form of P0 is not important here, in opposite to the conditions on the functions τ, h, h1 and h2 under which the results are valid. In a future paper on the uniform limits in ϕ, that class will be crucial.

We will see below that Tn under specific hypotheses on τ, h, h1, h2 and μn, converges to the exact inequality measure

where μ=E(X) is the mathematical expectation of X that we suppose finite here. We will come back later on the function classes F1, F2, F3 and F4 in which h, τ, h1 and h2 are supposed to lie.

Each measure of this Theil-like family has its own particular properties, that are derived from the combination of different concepts. One may mention the concept of welfare criteria (Atkinson (1970), Sen (1973)), that of the analogy with analysis of risks (Harsanyi (1953), Harsanyi (1955), Rothschild and Stiglitz (1973)), that of the complaints approach (Temkin (1993)) etc. The Theil inequality itself finds all its interest in the information-theoretic idea following that of main components (Kullback 1959). It is based on the three following axioms: Zero-valuation of certainty, Diminishing-valuation of probability, Additivity of independent events. A deep review of such of individual properties for a number inequality measures can be found in Cowell (Cowell (1980a, b, 2000)) for instance.

It is worth mentioning that the TLIM presented here, is rather a mathematical form gathering a number of different measures.

The rest of our paper is organized as follows. In Section 2, we describe the TLIM family and show how the particular indices are derived from it. In Section 3, we briefly recall the functional empirical processes setting. In section 4, we deal with the asymptotic theory of the TLIM, state and describe our main results and demonstrate them. Section 5 is devoted to datadriven applications. We finish by a conclusion in Section 7.

2. Description of the TLIM

This inequality measures mentioned above are derived from (1.1) with the particular values of the mesurable functions τ,h,h1 and h2 as described below for all s>0.

Let Z1,Z2,…,Zn be a sequence of independent and identically distributed random elements defined on the probability space (Ω,A,P), with values in some metric space (S,d). Given a collection F of measurable functions f:S→R satisfying

where P(f)=E(f(Z)) is the mathematical expectation of f(Z), the functional empirical process (FEP) based on the (Zj)j=1,...,n and indexed by F is defined by:

for instance. It is readily derived from the real Law of Larges Numbers (

) and the real Central Limit Theorem (

When using the FEP, we are often interested in uniform LLN’s and weak limits of the FEP considered as stochastic processes. This gives the so important results on Glivenko-Cantelli classes and Donsker ones. Let us define them here (for more details see Van der Vaart and Wellner (1996)).

Since we may deal with non measurable sequences of random elements, we generally use the outer almost sure convergence defined as follows:

a sequence Un converges outer almost surely to zero, denoted by Un→0as∗, whenever there is a measurable sequence of measurable random variables Vn such that

The weak convergence generally holds in ℓ∞(F), the space of all bounded real functions defined on F, equipped with the supremum norm ∥x∥F=supf∈F|x(f)|.

In this paper, we only use finite-dimensional forms of the FEP, that is (Gn(fi),i=1,…,k). And then, any family {fi,i=1,…,k} of measurable functions satisfying (3.1), is a Glivenko-Cantelli and a Donsker class, and hence

where G is the Gaussian process, defined in Definition 2. We will make use of the linearity property of both Gn and G. Let f1,…,fk be measurable functions satisfying (3.1) and ai∈R,i=1,…,k, then

The materials defined here, when used in a smart way, lead to a simple handling of the problem which is addressed here.

Let us introduce some notation.

for all x∈VX, we define the following function

with Id(x)=x, and τ′ is the derivative of the function τ.

The following general condition will be assumed in all the paper:

Here are our main results.

Consider the following hypotheses based on the functions h, τ, h1, h2. The A1.x series concern the almost-sure limits and the A2.x the asymptotic normality.

(b) and we have the convergence in distribution, as n tends to infinity, of √n(Tn(ϕ,X)−T(ϕ,X)) to centered normal Gaussian law:

Remark. The main result is the one given in Point (a). From it, Point (b) is deduced in a straightforward way.

The results above cover all the TLIM class. They should be particularized for the practitioner who would pick one of the elements of that class for analyzing data. Here are then the details for each case.

a. The Theil’s measure

The empirical form of Theil measure is defined as follows

the continuous form of the Theil measure.

All these functions are continuous on VX, then the assumptions defined above become for the a.s. requires that EXlogX is finite and 0<μ<∞. As for the asymptotic normality, we need that

b. The Mean Logarithmic Deviation

be the empirical form of the Mean Logarithmic Deviation. Its theoretical form is given as folllows

These specific functions are given by:

In that case, we find easily that Kϕ=1, Bh=ElogX−1 and

In this case, the specific functions are given by:

And, the various forms are:

We may gather these indices into one subclass by giving different values to the function τ and to the parameter α, with this common expression

We require for consistency that EXα<∞ and that μ≠0 and, for asymptotic normality that

which tends towards a centered Gaussian process with variance

Now, we may return to the individual cases.

e. Case of the Kolm’s measure

This index is defined for α>0, and its specific functions are:

Its empirical form is given by

and its theoretical form is defined as follows

We need for consistency that μ<∞ and that Eexp(−αX)<∞ and, for asymptotic normality that

Since Kon,α=τ(In,α), we deduce that

Finally, we summarize the used abbreviations in Table 1, and, for each index, the expression of the function Fϕ and P(Fϕ) in Table 2 where we can find the expressions of aϕ and bϕ.

On one hand, denote by

by decomposing the difference of In and I, we get the next equality

As for all i=1,2; the function hi is continuous on VX and using the fact that μn converges almost surely to μ, then we have when n tends to infinity

Or the sequence of the random variables {h(Xj)}j=1,⋯,n is independent and identically distributed, and as Eh(X)<∞ by the hypothesis (A1.1), then the Law of Large Numbers implies that

On the other hand, as τ satisfies the hypothesis (A1.2), then we deduce that

Since hi is continuously differentiable at μ for i=1,2, we get

then we get the next expression