In this paper, the k sample Behrens-Fisher problem is investigated in high dimensional setting. We propose a new test statistic and demonstrate that the proposed test is expected to have more powers than some existing test especially when sample sizes are unbalanced. We provide theoretical investigation as well as numerical studies on both sizes and powers of the proposed tests and existing test. Both theoretical comparison of the asymptotic power functions and numerical studies show that the proposed test tends to have more powers than existing test in many cases of unbalanced sample sizes. 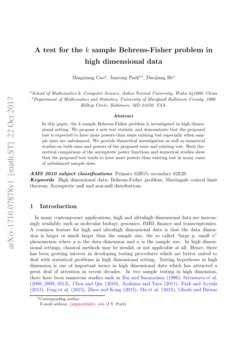 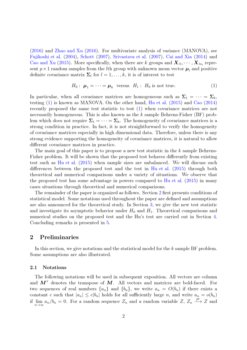 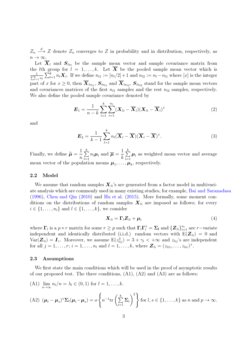 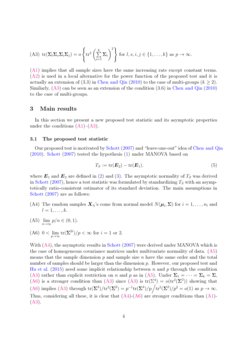 \boldmath{μ}l and positive definite covariance matrix \boldmath{Σ}l for l=1,…,k, it is of interest to test

The remainder of the paper is organized as follows. Section 2 first presents conditions of statistical model. Some notations used throughout the paper are defined and assumptions are also announced for the theoretical study. In Section 3, we give the new test statistic and investigate its asymptotic behavior under H0 and H1. Theoretical comparisons and numerical studies on the proposed test and the Hu’s test are carried out in Section 4. Concluding remarks is presented in 5.

In this section, we give notations and the statistical model for the k sample BF problem. Some assumptions are also illustrated.

The following notations will be used in subsequent exposition. All vectors are column and \boldmath{M}\tiny{T} denotes the transpose of M. All vectors and matrices are bold-faced. For two sequences of real numbers {an} and {bn}, we write an=O(bn) if there exists a constant c such that |an|≤c|bn| holds for all sufficiently large n, and write an=o(bn) if limn→∞an/bn=0. For a random sequence Zn

and a random variable

in probability and in distribution, respectively, as

We assume that random samples \boldmath{X}li’s are generated from a factor model in multivariate analysis which are commonly used in many existing studies, for example, Bai and Saranadasa (1996), Chen and Qin (2010) and Hu et al. (2015)

. More formally, some moment conditions on the distributions of random samples

We first state the main conditions which will be used in the proof of asymptotic results of our proposed test. The three conditions, (A1), (A2) and (A3) are as follows:

In this section we present a new proposed test statistic and its asymptotic properties under the conditions (A1)–(A3).

where \boldmath{E}1 and \boldmath{E}2 are defined in (2) and (3). The asymptotic normality of TS was derived in Schott (2007), hence a test statistic was formulated by standardizing TS

with an asymptotically ratio-consistent estimator of its standard deviation. The main assumptions in

With (A4), the asymptotic results in Schott (2007) were derived under MANOVA which is the case of homogeneous covariance matrices under multivariate normality of data. (A5) means that the sample dimension p and sample size n have the same order and the total number of samples should be larger than the dimension p. However, our proposed test and Hu et al. (2015) need some implicit relationship between n and p through the condition (A3) rather than explicit restriction on n and p as in (A5). Under \boldmath{Σ}1=⋯=\boldmath{Σ}k=% \boldmath{Σ}, (A6) is a stronger condition than (A3) since (A3) is tr(Σ4)=o(tr2(\boldmath{Σ}2)) showing that (A6) implies (A3) through tr(\boldmath{Σ}4)/tr2(\boldmath{Σ}2)=p−1tr(\boldmath{Σ}4)/p/tr2(\boldmath{Σ}2)/p2=o(1) as p→∞. Thus, considering all these, it is clear that (A4)-(A6) are stronger conditions than (A1)-(A3).

We modify TS in (5) by removing the terms \boldmath{X}\tiny{T}li\boldmath{X}li which is also done in Chen and Qin (2010) and get a test statistic denoted by T as follows:

It is worth pointing out that, for two sample BF problem, the statistic T is the same as Chen and Qin (2010) except a constant factor n1n2/n. Elementary derivation shows

We now propose a test statistic based on T in (6). It can be shown that the variance of T is

Suppose we have the following estimator of σ2T

then we have the ratio consistency of ˆσT2, i.e.,

The other estimator of σT is the estimator used in Bai and Saranadasa (1996) and Hu et al. (2015) which is stated in the following lemma.

On the basis of Lemmas 3.1 and 3.2, we propose two test statistics which are

In the following section, we prove the asymptotic normality of the proposed tests in (10) and their asymptotic power functions.

The following theorems establish the asymptotic normality of the new test statistic (10) under the H0 and their power function under the H1, when data dimension p and data size n increase to infinity.

The following theorem shows the asymptotic power function of the proposed test.

Since MANOVA is a special situation of the k sample BF problem, we have the following two corollaries which are immediate results from Theorems 3.1 and 3.2.

) hold, under the null hypothesis

In this section, we provide theoretical comparisons between the proposed test and some existing test. For k sample BF problem, Cao (2014) and Hu et al. (2015) construct test statistics via the same statistic

We provide numerical studies and theoretical comparisons between our proposed test statistic in (10) and ˆTH in the following sections.

We first compare the power functions of the proposed test ˆT and ˆTH when all sample sizes are the same, where ˆT is either ˆT1 or ˆT2 in (10). The following Corollary 4.1 states that ˆT and ˆTH have the same asymptotic power under balanced model. This can be shown directly from (11) and (12).

The test statistics ˆT and ˆTH have the same asymptotic power under balanced model which means each group has equal sample sizes.

For more general cases such as unbalanced sample sizes, it is not easy to compare the asymptotic power functions of ˆT and ˆTH. We compare all test statistics under simple and typical situations so that we can compare the power functions analytically. To obtain rough depiction, we assume \boldmath{Σ}1=⋯=\boldmath{Σ}k for the following cases. We define the asymptotic relative efficiency (ARE) of ˆT to ˆTH which is the ratio of two signal-to-noise ratios:

Based on the ARE (13), we consider the following two representative cases:

To summarize, we see that the proposed test ˆT has potential to have more power than ˆTH when sample sizes are highly unbalanced while ˆT and ˆTH have the same asymptotic power from Corollary 4.1.. We provide numerical studies to demonstrate this point in the following section.

As shown in Corollary 4.1., ˆT and ˆTH have the same asymptotic power function for balanced sample sizes. Therefore, we conduct simulations only for unbalanced sample sizes to compare ˆT (ˆT1 and ˆT2) with ˆTH. We set k=3 and generate Xlij from the following two models.