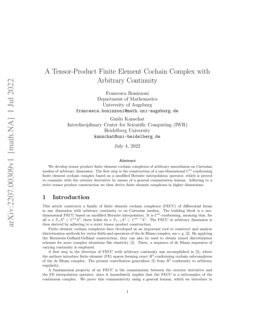 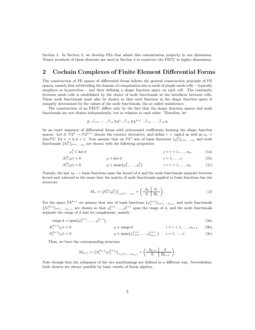 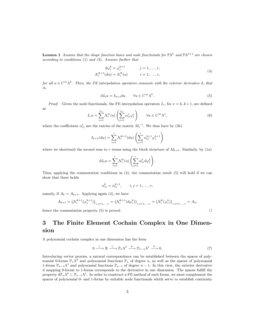 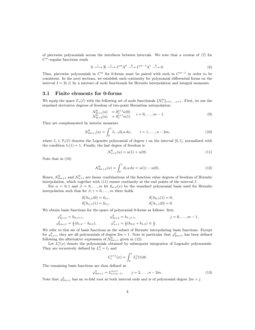 The magnetic field from a homogeneously magnetized cylindrical tile

Fortin Operator for the Taylor-Hood Element

We design a Fortin operator for the lowest-order Taylor-Hood element in ...
Lars Diening, et al. ∙

This article constructs a family of finite element cochain complexes (FECC) of differential forms in any dimension with arbitrary continuity m on Cartesian meshes. The building block is a one-dimensional FECC based on modified Hermite interpolation. It is Cm-conforming, meaning that, for all u∈PnΛ0⊂CmΛ0, there holds du∈Pn−1Λ1⊂Cm−1Λ1. The FECC in arbitrary dimension is then derived by adhering to a strict tensor product construction.

Finite element cochain complexes have developed as an important tool to construct and analyze discretization methods for vector fields and operators of the de Rham complex, see e. g.

[2]. By applying the Bernstein-Gelfand-Gelfand construction, they can also be used to obtain mixed discretization schemes for more complex situations like elasticity [3]. There, a sequence of de Rham sequences of varying continuity is employed.

A first step in the direction of FECC with arbitrary continuity was accomplished in [5], where the authors introduce finite element (FE) spaces forming exact H1-conforming cochain subcomplexes of the de Rham complex. The present contribution generalizes [5] from H1-conformity to arbitrary regularity.

A fundamental property of an FECC is the commutation between the exterior derivative and the FE interpolation operator, since it immediately implies that the FECC is a subcomplex of the continuous complex. We prove this commutativity using a general lemma, which we introduce in Section 2. In Section 3, we develop FEs that admit this commutation property in one dimension. Tensor products of these elements are used in Section 4 to construct the FECC in higher dimensions.

The construction of FE spaces of differential forms follows the general construction principle of FE spaces, namely first subdividing the domain of computation into a mesh of simple mesh cells —typically simplices or hypercubes— and then defining a shape function space on each cell. The continuity between mesh cells is established by the choice of node functionals at the interfaces between cells. These node functionals must also be chosen so that each function in the shape function space is uniquely determined by the values of the node functionals, the so called unisolvence.

The construction of an FECC differs only by the fact that the shape function spaces and node functionals are not chosen independently, but in relation to each other. Therefore, let

be an exact sequence of differential forms with polynomial coefficients forming the shape function spaces. Let d:PΛk→PΛk+1 denote the exterior derivative, and define r=rankd as well as nν=dimPΛν for ν=k,k+1. Now assume that on PΛk sets of basis functions {φkj}j=1,…,nk and node functionals {Nki}i=1,…,nk are chosen with the following properties:

Thus, we have the corresponding structure

Note though that the subspaces of the two partitionings are defined in a different way. Nevertheless, both choices are always possible by basic results of linear algebra.

Assume that the shape function bases and node functionals for PΛk and PΛk+1 are chosen according to conditions (1) and (3). Assume further that

for all u∈C∞Λk. Then, the FE interpolation operators commute with the exterior derivative d, that is,

Proof: Given the node functionals, the FE interpolation operators Iν, for ν=k,k+1, are defined as

where the coefficients ανij are the entries of the matrix M−1ν. We thus have by (3b)

where we shortened the second sum to r terms using the block structure of Mk+1. Similarly, by (1a)

3 The Finite Element Cochain Complex in One Dimension

A polynomial cochain complex in one dimension has the form

Thus, piecewise polynomials in Cm for 0-forms must be paired with such in Cm−1 in order to be consistent. In the next sections, we establish such continuity for polynomial differential forms on the interval I=[0,1]

by a mixture of node functionals for Hermite interpolation and integral moments.

We equip the space Pn(I) with the following set of node functionals {N0i}i=1,…,n+1

. First, we use the standard derivative degrees of freedom of two-point Hermitian interpolation:

They are complemented by interior moments

where ℓi∈Pi(I) denotes the Legendre polynomial of degree i on the interval [0,1], normalized with the condition ℓi(1)=1. Finally, the last degree of freedom is

Hence, N02m+1 and N0n+1 are linear combinations of the function value degrees of freedom of Hermite interpolation, which together with (11) ensure continuity at the end points of the interval I.

For α=0,1 and β=0,…,m let hα,β(x) be the standard polynomial basis used for Hermite interpolation such that for β,γ=0,…,m there holds

We obtain basis functions for the space of polynomial 0-forms as follows: first,

We refer to this set of basis functions as the subset of Hermite interpolating basis functions. Except for φ0n+1, they are all polynomials of degree 2m+1. Note in particular that φ02m+1 has been defined following the alternative expression of N02m+1 given in (12).

Let Lαj(x) denote the polynomials obtained by subsequent integration of Legendre polynomials. They are recursively defined by L0j=ℓj and

The remaining basis functions are then defined as

Note that φ02m+j has an m-fold root at both interval ends and is of polynomial degree 2m+j.

We construct node functionals and basis functions for 1-forms on I such that the commuting interpolation result of the Section 2 holds. First, we observe that according to (7) the dimension is reduced by one. Thus, we define basis functions for Pn−1Λ1 by

Note that φ0n+1 is the constant function which is mapped to zero by the derivative. The linear independence of the basis functions will follow from the unisolvence proven in the next section.

Hence, we have for any u∈PnΛ0:

The remaining node functionals are

A particular consequence of this construction is

In order to prove unisolvence of the FE for PnΛ0, we study the structure of nonzero entries of the matrix aij=N0i(φ0j). To this end, we split node functionals and basis functions into three groups:

By construction, there holds immediately

Furthermore, since the function values and the first m derivatives of Lm+1j+m−1 vanish in the end points, there holds

we obtain by recursion that

where αi are coefficients computable from (17). Using that Lmj+m−1 is the derivative of φ02m+j and ℓj−1 is the lowest order polynomial in its expansion, we note for i<j

This yields a lower triangular matrix. Ignoring the finer structure in formula (18), we obtain the following block matrix structure:

Since this matrix is lower triangular with nonzero diagonal entries, it has full rank and thus the FE PnΛ0 is unisolvent. In particular, the set of basis functions and the set of node functionals are both linearly independent.

While the node functionals in (9) are standard degrees of freedom for Hermite interpolation, those in (12) and (11) are linear combinations of the usual ones. More so, they make the implementation considerably more complicated, since their usual purpose of ensuring continuity is not easily accomplished. Therefore, we point out that these degrees of freedom serve for the analysis of interpolation operators only, but that implementations should use u(0) and u(1) as in Hermite interpolation.

The node functionals {N0i}i=1,…,n+1 and {N1i}i=1,…,n are well-defined for Cm-regular functions. Following the same procedure as in [5], it is possible to weaken such conditions, and introduce weighted node functionals {¯¯¯¯¯¯¯¯N0i}i=1,…,n+1 and {¯¯¯¯¯¯¯¯N1i}i=1,…,n which are bounded in L2. This construction yields the L2-stable and commuting quasi-interpolation operators given by:

4 Tensorization of the Finite Element Complex

The tensor product of complex (7) on I with itself is the following de Rham complex on the Cartesian product I×I:

where the spaces of polynomial differential forms are defined as

and the exterior derivative d:(PΛ⊗2)ν→(PΛ⊗2)ν+1, ν=0,1,2, is the linear operator acting on tensor product functions as follows:

for all compatible pairs of indices (i1,i2) and (j1,j2). For example, in the particular case n=5, the C2-regular tensor product FEs are complemented with the following node functionals:

Tensor product node functionals apply to two-dimensional functions in a straightforward way. For example, for u∈C∞Λ0(I×I), there holds:

and can be naturally applied to two-dimensional functions.

The tensor product construction generalizes to any tensorization order N≥2, giving rise to the following de Rham subcomplex on the Cartesian product I×N:

The tensor product spaces are defined as

In analogy to formula (23), there holds

with φij:=φi1j1⊗⋯⊗φiNjN. The tensor product basis {φij,i∈χν,j≤n+1−i} is also known as rank-one basis.

The tensor product construction yields node functionals {Nij,i∈χν,1≤j≤n+1−i} for (PΛ⊗N)ν that are defined on rank-one basis functions as

and then extend by linearity to any element of (PΛ⊗N)ν, with the convention Nij(φi′j′)=0 for i≠i′. The node functionals apply to higher-dimensional regular functions in a straightforward way.

once we extend I0 on 1-forms and I1 on 0-forms as the null-operator.

Exploiting the tensor product construction, and using Lemma 1, the following result can be proved.

The tensor product interpolation operator I⊗Nν defined in (30) is a cochain operator, namely, for all smooth forms u∈C∞Λν(I×N), there holds

For a complete proof we refer the reader to [5], where equation (31) is first proven for rank-one functions, and then extended by linearity and density to all smooth differential forms.

We have developed tensor product FEs for the de Rham complex of arbitrary smoothness and dimension. Their construction is based on one dimensional Hermite interpolation and the commutation property of the finite element interpolation operators is proven using a general commutation lemma.

This construction plays an important role in the framework of Bernstein-Gelfand-Gelfand (BGG) sequences [3], where for instance de Rham complexes of different smoothness are combined to yield new complexes. The construction here yields the one-dimensional building blocks for tensor product FE BGG sequences as well as the tensor product base complexes, as we point out in [6].

The general framework of de Rham complex embeds several problems important from the application point of view, like the Darcy and the Maxwell problem. To discretize those problems, it is then possible to employ the proposed FE spaces. In particular, they can be combined with model order reduction techniques, to handle parametric boundary value problems. Some works in this direction [11, 12, 13, 14, 15] consider the parametric Helmholtz equation, and they could represent the starting point towards the parametric Maxwell equation. Moreover, following the ideas in [4], they can be employed in combination with uncertainty quantification techniques to deal with the lognormal Darcy problem modeling the fluid flow in bounded heterogeneous media [9, 10, 8, 7].

The first author acknowledge support from the HGS MathComp through the Distinguished Romberg Guest Professorship Program. Moreover, the work of the first author is part of a project that has received funding from the European Research Council ERC under the European Union’s Horizon 2020 research and innovation program (Grant agreement No. 865751). The second author was supported by the Deutsche Forschungsgemeinschaft (DFG, German Research Foundation) under Germany’s Excellence Strategy EXC 2181/1 - 390900948 (the Heidelberg STRUCTURES Excellence Cluster).