The availability of corpora to train semantic parsers in English has lead to significant advances in the field. Unfortunately, for languages other than English, annotation is scarce and so are developed parsers. We then ask: could a parser trained in English be applied to language that it hasn't been trained on? To answer this question we explore zero-shot cross-lingual semantic parsing where we train an available coarse-to-fine semantic parser (Liu et al., 2018) using cross-lingual word embeddings and universal dependencies in English and test it on Italian, German and Dutch. Results on the Parallel Meaning Bank - a multilingual semantic graphbank, show that Universal Dependency features significantly boost performance when used in conjunction with other lexical features but modelling the UD structure directly when encoding the input does not. 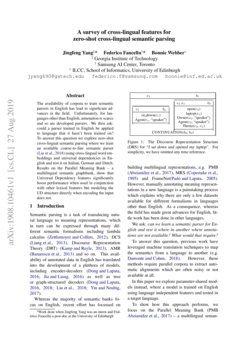 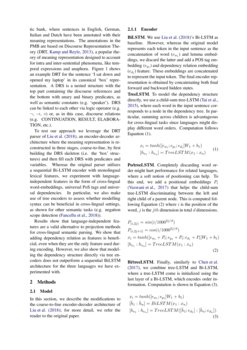 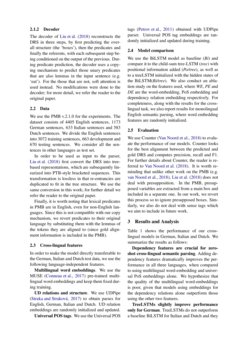 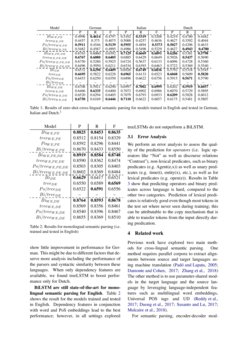 Semantic parsing is a task of transducing natural language to meaning representations, which in turn can be expressed through many different semantic formalisms including lambda calculus Zettlemoyer and Collins (2012), DCS Liang et al. (2013), Discourse Representation Theory (DRT) Kamp and Reyle (2013), AMR Banarescu et al. (2013) and so on. This availability of annotated data in English has translated into the development of a plethora of models, including encoder-decoders Dong and Lapata (2016); Jia and Liang (2016) as well as tree or graph-structured decoders Dong and Lapata (2016, 2018); Liu et al. (2018); Yin and Neubig (2017). ††*Work done when Jingfeng Yang was an intern and Federico Fancellu a post-doc at the University of Edinburgh

Whereas the majority of semantic banks focus on English, recent effort has focussed on building multilingual representations, e.g. PMB Abzianidze et al. (2017), MRS Copestake et al. (1995) and FrameNetPadó and Lapata (2005). However, manually annotating meaning representations in a new language is a painstaking process which explains why there are only a few datasets available for different formalisms in languages other than English. As a consequence, whereas the field has made great advances for English, little work has been done in other languages.

We ask: can we learn a semantic parser for English and test it where in another where annotations are not available? What would that require?

To answer this question, previous work have leveraged machine translation techniques to map the semantics from a language to another (e.g. Damonte and Cohen, 2018). However, these methods require parallel corpora to extract automatic alignments which are often noisy or not available at all.

In this paper we explore parameter-shared models instead, where a model is trained on English using language independent features and tested in a target language.

To show how this approach performs, we focus on the Parallel Meaning Bank (PMB Abzianidze et al., 2017) – a multilingual semantic bank, where sentences in English, German, Italian and Dutch have been annotated with their meaning representations. The annotations in the PMB are based on Discourse Representation Theory (DRT, Kamp and Reyle, 2013), a popular theory of meaning representation designed to account for intra and inter-sentential phenomena, like temporal expressions and anaphora. Figure 1 shows an example DRT for the sentence ‘I sat down and opened my laptop’ in its canonical ‘box’ representation. A DRS is a nested structure with the top part containing the discourse references and the bottom with unary and binary predicates, as well as semantic constants (e.g. ‘speaker’). DRS can be linked to each other via logic operator (e.g. ¬, →, ⋄) or, as in this case, discourse relations (e.g. CONTINUATION, RESULT, ELABORATION, etc.).

To test our approach we leverage the DRT parser of liu2018discourse, an encoder-decoder architecture where the meaning representation is reconstructed in three stages, coarse-to-fine, by first building the DRS skeleton (i.e. the ‘box’ structures) and then fill each DRS with predicates and variables. Whereas the original parser utilizes a sequential Bi-LSTM encoder with monolingual lexical features, we experiment with language-independent features in the form of cross-lingual word-embeddings, universal PoS tags and universal dependencies. In particular, we also make use of tree encoders to assess whether modelling syntax can be beneficial in cross-lingual settings, as shown for other semantic tasks (e.g. negation scope detection Fancellu et al. (2018)).

Results show that language-independent features are a valid alternative to projection methods for cross-lingual semantic parsing. We show that adding dependency relation as features is beneficial, even when they are the only feature used during encoding. However, we also show that modeling the dependency structure directly via tree encoders does not outperform a sequential BiLSTM architecture for the three languages we have experimented with.

In this section, we describe the modifications to the coarse-to-fine encoder-decoder architecture of Liu et al. (2018); for more detail, we refer the reader to the original paper.

BiLSTM. We use Liu et al. (2018)’s Bi-LSTM as baseline. However, whereas the original model represents each token in the input sentence as the concatenation of word (ewi) and lemma embeddings, we discard the latter and add a POS tag embedding (epi) and dependency relation embedding (edi) feature. These embeddings are concatenated to represent the input token. The final encoder representation is obtained by concatenating both final forward and backward hidden states.

TreeLSTM. To model the dependency structure directly, we use a child-sum tree-LSTM Tai et al. (2015), where each word in the input sentence corresponds to a node in the dependency tree. In particular, summing across children is advantageous for cross-lingual tasks since languages might display different word orders. Computation follows Equation (1).

Po/treeLSTM. Completely discarding word order might hurt performance for related languages, where a soft notion of positioning can help. To this end, we add a positional embeddings Pi Vaswani et al. (2017) that helps the child-sum tree-LSTM discriminating between the left and right child of a parent node. This is computed following Equation (2) where i is the position of the word, j is the jth dimension in total d dimensions.

Bi/treeLSTM. Finally, similarly to chen2017improved, we combine tree-LSTM and Bi-LSTM, where a tree-LSTM come is initialized using the last layer of a Bi-LSTM, which encodes order information. Computation is shown in Equation (3).

The decoder of liu2018discourse reconstructs the DRS in three steps, by first predicting the overall structure (the ‘boxes’), then the predicates and finally the referents, with each subsequent step being conditioned on the output of the previous. During predicate prediction, the decoder uses a copying mechanism to predict those unary predicates that are also lemmas in the input sentence (e.g. ‘eat’). For the those that are not, soft attention is used instead. No modifications were done to the decoder; for more detail, we refer the reader to the original paper.

In order to be used as input to the parser, liu2018discourse first convert the DRS into tree-based representations, which are subsequently linearized into PTB-style bracketed sequences. This transformation is lossless in that re-entrancies are duplicated to fit in the tree structure. We use the same conversion in this work; for further detail we refer the reader to the original paper.

Finally, it is worth noting that lexical predicates in PMB are in English, even for non-English languages. Since this is not compatible with our copy mechanism, we revert predicates to their original language by substituting them with the lemmas of the tokens they are aligned to (since gold alignment information is included in the PMB).

In order to make the model directly transferable to the German, Italian and Dutch test data, we use the following language-independent features.

UD relations and structure. We use UDPipe Straka and Straková (2017) to obtain parses for English, German, Italian and Dutch. UD relation embeddings are randomly initialized and updated.

We use the BiLSTM model as baseline (Bi) and compare it to the child-sum tree-LSTM (tree) with positional information added (Po/tree), as well as to a treeLSTM initialized with the hidden states of the BiLSTM(Bi/tree). We also conduct an ablation study on the features used, where WE, PE and DE are the word-embedding, PoS embedding and dependency relation embedding respectively. For completeness, along with the results for the cross-lingual task, we also report results for monolingual English semantic parsing, where word embedding features are randomly initialized.

We use Counter Van Noord et al. (2018) to evaluate the performance of our models. Counter looks for the best alignment between the predicted and gold DRS and computes precision, recall and F1. For further details about Counter, the reader is referred to van2018evaluating. It is worth reminding that unlike other work on the PMB (e.g. van Noord et al., 2018), Liu et al. (2018) does not deal with presupposition. In the PMB, presupposed variables are extracted from a main box and included in a separate one. In our work, we revert this process so to ignore presupposed boxes. Similarly, we also do not deal with sense tags which we aim to include in future work.

Table 1 shows the performance of our cross-lingual models in German, Italian and Dutch. We summarize the results as follows:

Dependency features are crucial for zero-shot cross-lingual semantic parsing. Adding dependency features dramatically improves the performance in all three languages, when compared to using multilingual word-embedding and universal PoS embeddings alone. We hypothesize that the quality of the multilingual word-embeddings is poor, given that models using embeddings for the dependency relations alone outperform those using the other two features.

BiLSTM are still state-of-the-art for monolingual semantic parsing for English. Table 2 shows the result for the models trained and tested in English. Dependency features in conjunction with word and PoS embeddings lead to the best performance; however, in all settings explored treeLSTMs do not outperform a BiLSTM.

We go back to the questions in the introduction:

Can we train a semantic parser in a language where annotation is available?. In this paper we show that this is indeed possible and we propose a zero-shot cross-lingual semantic parsing method based on language-independent features, where a parser trained in English – where labelled data is available, is used to parse sentences in three languages, Italian, German and Dutch.

What would that require? We show that universal dependency features can dramatically improve the performance of a cross-lingual semantic parser but modelling the tree structure directly does not outperform sequential BiLSTM architectures, not even when the two are combined together.

We are planning to extend this initial survey to other DRS parsers that does not exclude presupposition and sense as well as to other semantic formalisms (e.g. AMR, MRS) where data sets annotated in languages other than English are available. Finally, we want to understand whether adding a bidirectionality to the treeLSTM will help improving the performance on modelling the dependency structure directly.

This work was done while Federico Fancellu was a post-doctoral researcher at the University of Edinburgh. The views expressed are his own and do not necessarily represent the views of Samsung Research.