A subquadratic algorithm for the simultaneous conjugacy problem

The d-Simultaneous Conjugacy problem in the symmetric group S_n asks whether there exists a permutation τ∈ S_n such that b_j = τ^-1a_j τ holds for all j = 1,2,…, d, where a_1, a_2,… , a_d and b_1, b_2,… , b_d are given sequences of permutations in S_n. The time complexity of existing algorithms for solving the problem is O(dn^2). We show that for a given positive integer d the d-Simultaneous Conjugacy problem in S_n can be solved in o(n^2) time. 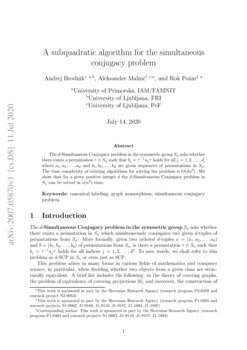 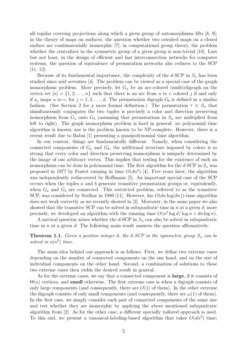 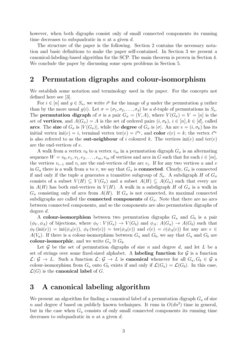 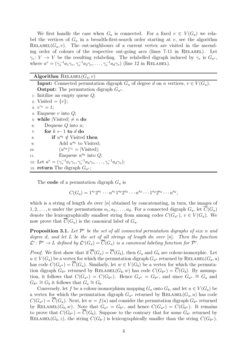 This problem arises in many forms in various fields of mathematics and computer science, in particular, when deciding whether two objects from a given class are structurally equivalent. A brief list includes the following: in the theory of covering graphs, the problem of equivalence of covering projections [6], and moreover, the construction of all regular covering projections along which a given group of automorphisms lifts [8, 9]; in the theory of maps on surfaces, the question whether two oriented maps on a closed surface are combinatorially isomorphic [7]; in computational group theory, the problem whether the centralizer in the symmetric group of a given group is non-trivial [10]. Last but not least, in the design of efficient and fast interconnection networks for computer systems, the question of equivalence of permutation networks also reduces to the SCP [11, 12].

Because of its fundamental importance, the complexity of the d-SCP in Sn has been studied since mid seventies [4]. The problem can be viewed as a special case of the graph isomorphism problem. More precisely, let Ga be an arc-colored (multi)digraph on the vertex set [n]={1,2,…,n} such that there is an arc from u to v colored j if and only if aj maps u to v, for j=1,2,…,d. The permutation digraph Gb is defined in a similar fashion. (See Section 2 for a more formal definition.) The permutation τ∈Sn that simultaneously conjugates the two tuples is precisely a color and direction preserving isomorphism from Ga onto Gb (assuming that permutations in Sn are multiplied from left to right). The graph isomorphism problem is hard in general: no polynomial time algorithm is known, nor is the problem known to be NP-complete. However, there is a recent result due to Babai [1] presenting a quasipolynomial time algorithm.

In our context, things are fundamentally different. Namely, when considering the connected components of Ga and Gb, the additional structure imposed by colors is so strong that every color and direction preserving isomorphism is uniquely determined by the image of one arbitrary vertex. This implies that testing for the existence of such an isomorphism can be done in polynomial time. The first algorithm for the d-SCP in Sn was proposed in 1977 by Fontet running in time O(dn2) [4]. Five years later, the algorithm was independently rediscovered by Hoffmann [5]. An important special case of the SCP occurs when the tuples a and b generate transitive permutation groups or, equivalently, when Ga and Gb are connected. This restricted problem, referred to as the transitive SCP, was considered by Sridhar in 1989 [11]. However, his O(dnlog(dn))-time algorithm does not work correctly as we recently showed in [2]. Moreover, in the same paper we also showed that the transitive SCP can be solved in subquadratic time in n at a given d; more precisely, we developed an algorithm with the running time O(n2logd/logn+dnlogn).

A natural question arises whether the d-SCP in Sn can also be solved in subquadratic time in n at a given d. The following main result answers the question affirmatively.

Given a positive integer d, the d-SCP in the symmetric group Sn can be solved in o(n2) time.

As for the extreme cases, we say that a connected component is large, if it consists of Θ(n) vertices, and small otherwise. The first extreme case is when a digraph consists of only large components (and consequently, there are O(1) of them). In the other extreme the digraph consists of only small components (and consequently, there are ω(1) of them). In the first case, we simply consider each pair of connected components of the same size and test whether they are isomorphic by applying the above mentioned subquadratic algorithm from [2]. As for the other case, a different specially tailored approach is used. To this end, we present a canonical-labeling-based algorithm that takes O(dn2) time; however, when both digraphs consist only of small connected components its running time decreases to subquadratic in n at a given d.

The structure of the paper is the following. Section 2 contains the necessary notation and basic definitions to make the paper self-contained. In Section 3 we present a canonical-labeling-based algorithm for the SCP. The main theorem is proven in Section 4. We conclude the paper by discussing some open problems in Section 5.

We establish some notation and terminology used in the paper. For the concepts not defined here see [3].

is the set of ordered pairs

A walk from a vertex v0 to a vertex vm in a permutation digraph Gσ is an alternating sequence W=v0,e1,v1,e2,…,em,vm of vertices and arcs in G such that for each i∈[m], the vertices vi−1 and vi are the end-vertices of the arc ei. If for any two vertices u and v in Ga there is a walk from u to v, we say that Gσ is connected. Clearly, Gσ is connected if and only if the tuple a generates a transitive subgroup of Sn. A subdigraph H of Gσ consists of a subset V(H)⊆V(Gσ) and a subset A(H)⊆A(Gσ) such that every arc in A(H) has both end-vertices in V(H). A walk in a subdigraph H of Gσ is a walk in Gσ consisting only of arcs from A(H). If Gσ is not connected, its maximal connected subdigraphs are called the connected components of Gσ. Note that there are no arcs between connected components, and so the components are also permutation digraphs of degree d.

Let G be the set of permutation digraphs of size n and degree d, and let L be a set of strings over some fixed-sized alphabet. A labeling function for G is a function L:G→L. Such a function L:G→L is canonical whenever for all Ga,Gb∈G a colour-isomorphism from Ga onto Gb exists if and only if L(Ga)=L(Gb). In this case, L(G) is the canonical label of G.

We present an algorithm for finding a canonical label of a permutation digraph Ga of size n and degree d based on publicly known techniques. It runs in O(dn2) time in general, but in the case when Ga consists of only small connected components its running time decreases to subquadratic in n at a given d.

We first handle the case when Ga is connected. For a fixed v∈V(Ga) we relabel the vertices of Ga in a breadth-first-search order starting at v, see the algorithm Relabel(Ga,v). The out-neighbours of a current vertex are visited in the ascending order of colours of the respective out-going arcs (lines 7-11 in Relabel). Let γv:V→V be the resulting relabeling. The relabelled digraph induced by γv is Gav, where av=(γ−1va1γv,γ−1va2γv,…,γ−1vadγv) (line 12 in Relabel).

The code of a permutation digraph Ga is

which is a string of length dn over [n] obtained by concatenating, in turn, the images of 1,2,…,n under the permutations a1,a2,…,ad. For a connected digraph Ga, let ¯¯¯¯C(Ga) denote the lexicographically smallest string from among codes C(Gav), v∈V(Ga). We now prove that ¯¯¯¯C(Ga) is the canonical label of Ga.

Let Pc be the set of all connected permutation digraphs of size n and degree d, and let L be the set of all strings of length dn over [n]. Then the function Lc:Pc→L defined by Lc(Ga)=¯¯¯¯C(Ga) is a canonical labeling function for Pc.

Next, we bound the time complexity of computing ¯¯¯¯C(Ga).

The canonical label ¯¯¯¯C(Ga) of a connected permutation digraph Ga of size n and degree d can be computed in O(dn2) time.

One call of Relabel(Ga,v) takes time O(dn) in order to construct Gav, while its code C(Gav) can also be computed in linear time. Since this has to be repeated for each v∈V(Ga), the total running time for constructing the codes is O(dn2). Clearly, choosing the lexicographically smallest code does not increase this time bound. ∎

In the reminder of this section we consider the case when Ga is not connected. Let us denote the connected components of Ga by H1,H2,…,Hk, and recall that each such component is a permutation digraph of degree d. Further, let us concatenate the respective canonical labels ¯¯¯¯C(H1),¯¯¯¯C(H2),…,¯¯¯¯C(Hk) in such an order that the resulting string C∗(Ga) is lexicographically smallest. The following result shows that C∗(Ga) is the canonical label of Ga.

The proof follows from the description of C∗(Ga) above and Proposition 3.1. ∎

In the next section we will make use of the following result regarding permutation digraphs when all connected components have equal size.

If a permutation digraph Ga of size n and degree d consists of precisely k equal-sized connected components, then its canonical label C∗(Ga) can be computed in O(dn2/k) time.

Let H1,H2,…,Hk be the connected components of Ga. Since each component Hi is of size n/k we can find its canonical label ¯¯¯¯C(Hi), by Lemma 3.2, in O(d(n/k)2) time. Consequently, the total running time for constructing the canonical labels of all components is O(dn2/k). To compute C∗(Ga), all we need to do is to sort these labels. Using radix sort this can be done in time O(dn/k(n/k+k)), which obviously does not increase the time bound O(dn2/k). ∎

Recall that a tuple a is simultaneously conjugate to a tuple b if and only if the permutation digraph Ga is color-isomorphic to the permutation digraph Gb. Before considering the general case when the digraphs Ga and Gb have variable size components, we deal with two extreme cases, namely, when the digraphs have either only equal-sized small components or only equal-sized large components.

Let Ga and Gb be permutation digraphs, each of size n and degree d, and let both Ga and Gb consist of only small equal-sized connected components. Then we can test whether Ga and Gb are colour-isomorphic in time o(n2) at a given d.

Let k be the number of connected components. By Corollary 3.4 we can compute the canonical labels of both digraphs and hence perform the isomorphism test in time O(dn2/k). Since all components are small, we have k=ω(1) and consequently O(dn2/k)=o(n2) at a given d. ∎

Let Ga and Gb be permutation digraphs, each of size n and degree d, and let both Ga and Gb consist of only large equal-sized connected components. Then we can test whether Ga and Gb are colour-isomorphic in O(n2logd/logn+dnlogn) time.

Let k be the number of connected components. Since all components are large, we have k=O(1). Obviously, at most k2=O(1) pairs of components, each of size n/k=O(n), need to be tested for isomorphism. By [2], this requires a total of O(n2logd/logn+dnlogn) time. ∎

We are now ready to prove the main result.

The max-term is o(n) since ni/log(ni)=o(n) for each large component as well as ni=o(n) for each small component. The final result follows as ∑ri=1pini=n. ∎

It remains an open problem whether for a given positive integer d the d-SCP in the symmetric group Sn can be solved in a strongly subqudratic time in n, that is, in time O(n2−ϵ) for some ϵ>0. Further, completely unanswered is the question of the problem’s lower bound, except for the trivial one, Ω(n). The obvious question is whether it can be raised to Ω(nlogn) reflecting erroneous Sridhar’s upper bound, or even to a higher bound by proving conditional lower bounds based on conjectures of hardness for well-studied problems, as it was already done for a number of other problems.