In this work, we introduce a generalization of the enriched Galerkin (EG) method. The key feature of our scheme is an adaptive two-mesh approach that, in addition to the standard enrichment of a conforming finite element discretization via discontinuous degrees of freedom, allows to subdivide selected (e.g. troubled) mesh cells in a non-conforming fashion and to use further discontinuous enrichment on this finer submesh. We prove stability and sharp a priori error estimates for a linear advection equation by using a specially tailored projection and conducting some parts of a standard convergence analysis for both meshes. By allowing an arbitrary degree of enrichment on both, the coarse and the fine mesh (also including the case of no enrichment), our analysis technique is very general in the sense that our results cover the range from the standard continuous finite element method to the standard discontinuous Galerkin (DG) method with (or without) local subcell enrichment. Numerical experiments confirm our analytical results and indicate good robustness of the proposed method. 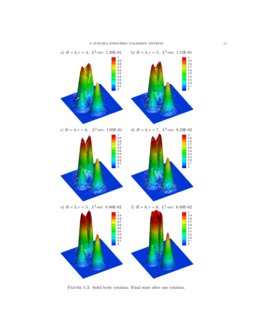 The main idea of the enriched Galerkin (EG) method is to extend the approximation space of the continuous finite elements by including some element-local discontinuous functions and to utilize a solution procedure similar to that of the discontinuous Galerkin (DG) method (Riemann solvers, edge fluxes, …). The latter feature makes the EG schemes fundamentally different from the XFEM methods that frequently also rely on local approximation space enrichments. The resulting discretization is locally conservative and robust but, in multidimensions, has substantially fewer degrees of freedom than a DG method of the same order.

In [RuppL2020], the EG methods were re-cast as a generalization of the classical finite elements, i.e. continuous Galerkin (CG) methods by considering the EG space as a combination of arbitrary continuous and discontinuous Galerkin (DG) test and trial spaces. However, the original EG scheme proposed in [Becker2003] for the advection equation was a combination of lowest order finite elements and finite volumes discretized using the DG framework. This methodology was further developed and investigated by Wheeler, Lee, and coworkers, who also considered higher order enriched CG methods and a wider range of applications [lee2016locally, sun2009locally, LEE2019, lee2018phase, lee2017adaptive, lee2018enriched, choo2018enriched, Kadeethum2019, kadeethum2019comparison]. The analysis of EG method in [RuppL2020] used a special EG-type projection and was limited to elliptic and parabolic problems. Nonetheless, it paved the way to the analysis for hyperbolic equations in this work.

Another well-known class of methods relying on subcell limiting to suppress spurious oscillations has been introduced in [Dumbser2014] and generalized to unstructured meshes in [Dumbser2016]. These techniques are based on the ADER-DG schemes proposed in [Dumbser2008] and possess a very attractive capability to detect high- and low-regularity solution behavior. The underlying a posteriori limiting strategy was inspired by the Multi-dimensional Optimal Order Detection (MOOD) approach originally developed for finite volumes. In the context of the ADER-DG methods, physical and numerical admissibility conditions are enforced by, first, advancing the solution in time using a high-order DG method on the coarse mesh, and, for troubled cells, repeating the last time step locally via a low-order DG (i.e. finite volume) method on the submesh.

Our subcell EG method has the potential to further customize the local approximation space by supporting the whole range of local polynomial orders on both, the coarse and the fine (subcell) mesh. This feature of our approach makes it possible to combine popular p- and hp-adaptivity techniques with the two-mesh approach , while exploiting its intrinsic ability to assess the local solution regularity.

The main purpose of this work is to present a stability and a priori error analysis for the subcell-enriched EG method for the linear advection equation and to demonstrate the performance of the new scheme using some test problems. As in [RuppL2020] this analysis is conducted in a unified framework that covers the CG, DG, and EG (with and without subcell enrichment) discretizations. The implementation of the new numerical scheme was carried out in our FESTUNG111https://github.com/FESTUNG framework [FrankRAK2015, ReuterAWFK2016, JaustRASK2018, ReuterHRFAK2019, ReuterRAFK2020] based on our EG scheme for the shallow-water equations [HauckAFHR2020].

We consider a non-stationary advection equation on a bounded Lipschitz domain Ω⊂Rd (with d≤3). The precise formulation of the linear hyperbolic problem to be solved is as follows:

for a given velocity field a∈L∞(0,T;W1,∞(Ω)) and a right-hand side function f∈L2((0,T)×Ω). Additionally, initial data u0∈C(¯¯¯¯Ω) is prescribed, and we denote by νΩ the outward unit normal to ∂Ω. Furthermore, we assume that the inflow boundary

1.2. Structure of the manuscript

The remainder of this manuscript is structured as follows: In Section 2, we introduce the enriched Galerkin method with local subcell enrichment for advection equations. Section 3 investigates the energy stability of the new scheme, while its a priori convergence is proved in Section 4 and verified numerically in Section 5. A short conclusions section wraps up the article.

In the following, (TH)H∈I⊂R+ denotes a successively refined family of TH\coloneqqTH(Ω)\coloneqq{Ki:i=1,…,Nel} (Nel>0 is the number of elements) of d-dimensional non-overlapping partitions of Ω (see [PietroErn, Def. 1.12]) that is assumed to be regular (in the sense of [PietroErn, Def. 1.38]) and geometrically conformal (in the sense of [ErnGuermond, Def. 1.55]). For the sake of simplicity, we assume that TH consists of simplices and/or quadrilaterals/hexahedrons.

Furthermore, TH|h denotes a mesh TH of which some elements have been refined (Fig. 2.1 (middle)). The mesh TH|h can be geometrically non-conformal. By construction, TH|h can be embedded into a regular and conformal mesh Th (Fig. 2.1 (right)), which contains the elements added during the refinement process. Hence, we can write TH|h as disjoint union

denoting the subsets of unrefined and refined elements, respectively. Writing F(TH) for the set of faces we define the skeleton of TH|h as

We write hK for the diameter of K; furthermore, parameter H refers to the maximum diameter of an element of a mesh, i.e., H=max{hK:K∈TH}. If ν without an index is evaluated on a face, a unit normal with respect to the face is arbitrarily chosen.

The test and trial spaces for our EG method utilize the broken polynomial spaces of order m on some mesh M∈{TH,TH|h}. They are denoted by Pm(M) and consist of element-wise polynomials of degree at most m

(simplices) or tensor-product polynomials of degree at most

m in each spatial coordinate (quadrilaterals/hexahedrons) without any continuity constraints. Thus,

In this work, we utilize several types of projection/interpolation operators denoted as follows:

The semi-discrete EG formulation of the problem can be constructed by using the standard DG bilinear and linear forms for the advection equation on TH|h. The bilinear form uses the notion of averages {[⋅]} and jumps [[⋅]], which for F∋F⊂∂K−∩∂K+ with K−≠K+ are defined as

for a scalar g that is element-wise smooth enough to have traces. On ∂Ω, this definition is modified as follows:

Hence, the jump turns a scalar into a vector. Also note the following property of jumps used in our analysis

Given a velocity field a, we define the upwind value of g as

Using this notation, we can formulate our semi-discrete problem

with trial function U and test function φ from Vkℓ,m for almost every t∈(0,T) and U(0)=πu0, where

We test ah with φ=U, use the identity 12(g′)2=gg′ and integrate by parts to obtain

where the last inequality follows from the Young’s and Cauchy–Schwarz inequalities and uses the assumption a(t,x)⋅νΩ≤−δ on ΓF. This directly implies the L∞(L2)-stability without exponential growth of constants if f≡0 and ∇⋅a≥0 after integrating with respect to time. Otherwise Grönwall’s, Young’s, and Cauchy–Schwarz inequalities give the result (after moving 12∫Ω(∇⋅a)U2dx to the right-hand side). ∎

For the error analysis, we need some auxiliary results:

Follows directly from the L2-orthogonality of Πℓ,mH|h and the possibility to localize the projection to all K∈TH. ∎

Let (TH)H∈I be a regular mesh sequence. There exists a constant C>0 such that for all H∈I, all φ∈Pk(TH), and all K∈TH

The first inequality is the observation that Π0Hv is the element-wise mean of v which needs to be smaller than or equal to its essential maximum. The second inequality is a simple combination of [KnabnerAngermann, Theo. 3.24 & 3.26]. ∎

Next, we formulate our main result.

we have due to the consistency and since eu∈Vkℓ,m that

This can be rewritten as

We can immediately deduce that:

This would give the desired result (after applying Grönwall’s inequality – if needed) provided that we could find good estimates for the terms involving θu, and |θu|H1(K). Note that only the norm ∥∇⋅a∥L∞(Ω) enters the exponential term in the Grönwall estimate.

We consider the cases K∈Sh and K∈SH separately. In the first case, we can estimate

In the second case, we obtain for K∈SH using the same arguments

The estimate for |θu|H1(K) is conducted analogously. Here, the projection π⋆u\coloneqqIkHu+ΠmH|h(u−IkHu) is used to obtain

which gives the needed estimate after inserting ±u into the second summand and redoing the aforementioned arguments. Collecting all terms gives the result. ∎

This result is not optimal, since it uses high regularity of the temporal derivative. However, in the case of DG, i.e. m=−1 and ℓ=k, the proof can be streamlined by replacing π (and π⋆) by ΠkH—this also implies that the initial data is constructed using an orthogonal projection with respect to the L2-norm. Here, also the distinction between simplices and quadrilaterals/hexahedrons becomes unnecessary, and the polynomial approximation spaces may all be of Pk type. This results in Ξ3=Ξ5=0 and yields the optimal estimate

In order to verify the convergence of the numerical schemes, we use the method of manufactured solution. On the domain Ω\coloneqq(0,1)×(0,1) and the time interval J\coloneqq(0,1/2), we define the analytical solution u(t,x1,x2) and velocity filed a(t,x1,x2) by

The right-hand side f of the problem is chosen so that u and a satisfy (1.1). We prescribe Dirichlet boundary conditions on the inflow boundary, i.e., ΓD\coloneqqΓ−, and use uD\coloneqqu|(x1,x2)∈ΓD and u0\coloneqqu|t=0.

Let r and R denote the refinement levels for the meshes with element sizes h and H, respectively. The initial mesh (R=r=1) consisting of four triangles is obtained by diagonally subdividing Ω; finer meshes are produced by connecting the edge midpoints of every triangle. As temporal discretization, we use an explicit SSP Runge–Kutta method with s=k+1 stages.

Our implementation currently supports the approximation orders up to two. This yields four possible combinations of k,ℓ, and m. In Table 5.1, the (r,R)-th entry corresponds to the L2-error at time t=1/2 using the refinement levels r and R.

We observe that our analytical convergence rates are confirmed by the numerical tests; however, somewhat better convergence (by an order of ca. 1/2) is apparent. This is a well-known phenomenon also experienced in numerical experiments for the DG method on regular meshes. Moreover, the first subcell refinement step has the tendency to show a deteriorated rate of convergence – presumably due to an increasing constant when switching between the two branches in the proof of Theorem 4.8 (discriminating between locally refined and not locally refined elements).

As the next benchmark problem, we use solid body rotation test proposed by LeVeque [LeVeque1996]. It consists of a slotted cylinder, a sharp cone, and a smooth hump (see Fig. 5.2 (right)) that are placed in a square domain Ω=(0,1)×(0,1) and transported by a time-independent velocity field

At the inlet Γ−, we prescribe the Dirichlet boundary condition u=0. The right-hand side of the advection equation is given by f=0. In order to obtain a discrete initial condition preserving the bounds of the analytical solution (0≤U|t=0≤1), we define u0 using the L2-projection into the space of piecewise constant functions instead of our special EG projection operator Πℓ,mH|h.