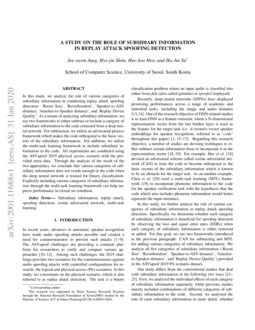 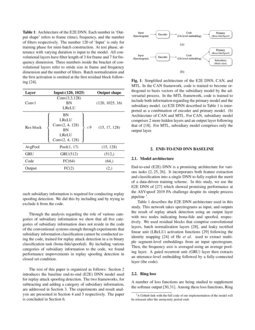 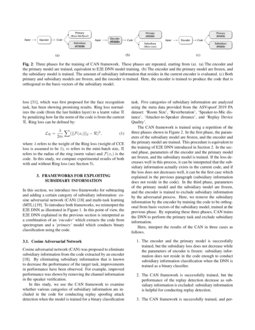 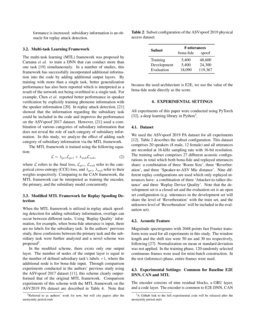 Understanding Impacts of Task Similarity on Backdoor Attack and Detection

In recent years, advances in automatic speaker recognition have made audio spoofing attacks possible and created a need for countermeasures to prevent such attacks [22, 26, 2, 3, 24, 31, 23, 13, 4]. The ASVspoof challenges are providing a common platform for researchers to verify and compare various approaches [30, 10, 25]

. Among such challenges, the 2019 challenge provides two scenarios for the countermeasures against audio spoofing attacks with controlled configurations for research: the logical and physical access (PA) scenarios. In this study, we concentrate on the physical scenario, which is also referred to as replay attack detection. The task is a binary classification problem where an input audio is classified into either

Recently, deep neural networks (DNNs) have displayed promising performances across a range of academic and industrial tasks, including the image and audio domains [32, 5]. One of the research objective of DNN-related studies is to train DNN as a feature extractor, where a N-dimensional representation vector from the last hidden layer is used as the feature for the target task (i.e. d-vector/x-vector speaker embeddings for speaker recognition, referred to as ‘code’ throughout this paper) [27, 22, 21, 12]. Regarding this research objective, a number of studies are devising techniques to either subtract certain information from or incorporate it in the representation vector [7, 1]. For example, Heo et al. [7] devised an adversarial scheme called cosine adversarial network (CAN) to train the code to become orthogonal to the basis vectors of the subsidiary information which is known to be an obstacle for the target task. As an another example, Chen et al. [16] used a multi-task learning (MTL) framework [1] to incorporate phoneme information to the code for the speaker verification task with the hypothesis that the code which also includes phoneme information would better represent the input utterance.

The rest of this paper is organized as follows: Section 2 introduces the baseline end-to-end (E2E) DNN model used for replay attack spoofing detection. The two frameworks, for subtracting and adding a category of subsidiary information, are addressed in Section 3. The experiments and result analysis are presented in Section 4 and 5 respectively. The paper is concluded in Section 6.

. It incorporates both feature extraction and classification into a single DNN to fully exploit the merit of a data-driven training scheme. In this study, we use the E2E DNN of

[9] which showed promising performance at the ASVspoof 2019 PA challenge despite its simple process pipeline 111A Github link with the full code of our implementation of the model will be released after the anonymity period ends.

used to extract multiple segment-level embeddings from an input spectrogram. Then, the frequency axis is averaged using an average pooling layer. A gated recurrent unit (GRU) layer then extracts an utterance-level embedding followed by a fully-connected layer (the code).

, which was first proposed for the face recognition task, has been showing promising results. Ring loss normalizes the code (from the last hidden layer) to a learnt value

R by penalizing how far the norm of the code is from the current R. Ring loss can be defined by:

where λ refers to the weight of the Ring loss (weight of CCE loss is assumed to be 1), m refers to the mini-batch size, R refers to the radius of the ring (norm value) and F(xi) is the code. In this study, we compare experimental results of both with and without Ring loss (see Section 5).

In this section, we introduce two frameworks for subtracting and adding a certain category of subsidiary information: cosine adversarial network (CAN) [7] and multi-task learning (MTL) [1]. To introduce both frameworks, we reinterpret the E2E DNN as illustrated in Figure 1. In this point of view, the E2E DNN explained in the previous section is interpreted as a combination of an ‘encoder’ which extracts the code from spectrogram and a ‘primary’ model which conducts binary classification using the code.

In this study, we use the CAN framework to examine whether various categories of subsidiary information are included in the code for conducting replay spoofing attack detection when the model is trained for a binary classification task. Five categories of subsidiary information are analyzed using the meta data provided from the ASVspoof 2019 PA dataset: ‘Room Size’, ‘Reverberation’, ‘Speaker-to-Mic distance’, ‘Attacker-to-Speaker distance’, and ‘Replay Device Quality’.

Here, interpret the results of the CAN in three cases as follows.

The multi-task learning (MTL) framework was proposed by Caruana et al. to train a DNN that can conduct more than one task [1] simultaneously. In a number of studies, this framework has successfully incorporated additional information into the code by adding additional output layers. By training with more than a single task, better generalization performance has also been reported which is interpreted as a result of the network not being overfitted to a single task. For example, Chen et al. reported better performance in speaker verification by explicitly training phoneme information with the speaker information [16]. In replay attack detection, [20] showed that the information regarding the subsidiary task could be included in the code and improves the performance on the ASVspoof 2017 dataset. However, [20] used a combination of various categories of subsidiary information that does not reveal the role of each category of subsidiary information. In this study, we analyze the effect of adding each category of subsidiary information via the MTL framework.

The MTL framework is trained using the following equation:

where L refers to the final loss, Lpri, Lsub refer to the categorical cross-entropy (CCE) loss, and λpri, λsub refer to their weights respectively. Comparing to the CAN framework, the MTL framework can be interpreted as training the encoder, the primary, and the subsidiary model concurrently.

When the MTL framework is utilized in replay attack spoofing detection for adding subsidiary information, overlaps can occur between different tasks. Using ‘Replay Quality’ information, for example, when bona-fide utterance is input, there are no labels for the subsidiary task. In the authors’ previous study, these confusions between the primary task and the subsidiary task were further analyzed and a novel scheme was proposed222Referred to as authors’ work for now, but will cite papers after the anonymity period ends.

In the modified scheme, there exists only one output layer. The number of nodes of the output layer is equal to the number of defined subsidiary task’s labels +1, where the additional node is for bona-fide input. Through comparison experiments conducted in the authors’ previous study using the ASVspoof 2017 dataset [10], this scheme clearly outperformed that of the original MTL framework. Comparison experiments of this scheme with the MTL framework on the ASV2019 PA dataset are described in Table 4. Note that because the used architecture is E2E, we use the value of the bona-fide node directly as the score.

All experiments of this paper were conducted using PyTorch

, a deep learning library in Python

333A Github link to the full experimental code will be released after the anonymity period ends.

We used the ASVspoof 2019 PA dataset for all experiments [25]. Table 2 describes the subset configuration. This dataset comprises 20 speakers (8 male, 12 female) and all utterances are recorded at 16-kHz sampling rate with 16-bit resolution. The training subset comprises 27 different acoustic configurations in total which both bona-fide and replayed utterances share: a combination of three ‘Room Size’, three ‘Reverberation’, and three ‘Speaker-to-ASV Mic distance’. Nine different replay configurations are used which only replayed utterances have: a combination of three ‘Attacker-to-talker distance’ and three ‘Replay Device Quality’. Note that the development set is a closed set and the evaluation set is an open set configuration (e.g. utterances in the development set will share the level of ‘Reverberation’ with the train set, and the unknown level of ‘Reverberation’ will be included in the evaluation set).

Magnitude spectrograms with 2048 points fast Fourier transform were used for all experiments in this study. The window length and the shift size were 50 ms and 30 ms respectively, following

. Normalization on mean or standard deviation was not applied. In the training phase, 120 randomly selected continuous frames were used for mini-batch construction. In the test (inference) phase, entire frames were used.

4.3 Experimental Settings: Common for Baseline E2E DNN, CAN and MTL

The encoder consists of nine residual blocks, a GRU layer, and a code layer. The encoder is common to E2E DNN, CAN and MTL. Each residual blocks have filter size of (3, 7) and stride size of (2, 4) where inequality in the size was set considering the size of input spectrogram ((120, 1025) for training). The GRU layer has 512 nodes. The code layer is fully-connected layer with 64 nodes. We used LReLU [14] for all the non-linearity.

We used the AMSGrad [18] optimizer with a learning rate of 0.0005. A weight decay with 0.0001 was applied to all parameters. The size of the mini-batch is 32. For models with Ring loss, the weights for the Ring loss and CCE loss are the same.

For each epoch, we made the training set with all 5400 bona-fide utterances and randomly selected 5400 spoofing utterances to balance the number of samples per each class. In our internal comparison experiments, this method brought performance improvement.

The primary model consists of only one output layer (fully-connected, 2 nodes indicating bona-fide/spoof) with no other hidden layers, for all E2E DNN, CAN, and MTL.

For experiments with the CAN framework, the subsidiary model consists of two fully-connected hidden layers with 128 nodes, and an output layer with three nodes following [7]. The relative proportions of the first, second, and the third phase, was set to 3:1:1, where the first refers to Figure 2-(a), which train the encoder and the primary model (This is identical to Baseline E2E training).

Tables 3 and 4 describe the result of applying the MTL framework and the modified MTL framework, respectively. The performances on the development set (closed set configuration) improved in all five categories of subsidiary information, showing a relative error rate reduction (RER) greater than 30 % (‘Reverberation’ in Table 3, ‘Attacker-to-Talker’ in Table 4). However, in the evaluation set (open set configuration), we gained a minor performance improvement of RER 3 % by using ‘Reverberation’ and ‘Replay Quality’ only.

We analyze that the performance difference between the development set and the evaluation set is mainly due to two reasons. First, different configuration between the closed set the and open set have brought performance differences. Training and development set share common configurations for each subsidiary information. However, although five categories of subsidiary information is used, the evaluation set comprises open set replay configurations. Second, in each category of subsidiary information, the number of sub-category labels are too small and ambiguous. For example, for ‘Replay Quality’ of the ASVspoof 2019 PA dataset, there exists only three different kinds of labels, ‘perfect’, ‘high’, and ‘low’. We conclude that three sub-categories, with rather ambiguous labels are too small to generalize towards unknown open set configurations. With this conclusion, successful results using the ASVspoof 2017 evaluation dataset (open set) with the MTL framework are analyzed to have occurred owing to actual replay device labels.