A study of variability induced by events dependency in microelectronic production

-Complex manufacturing systems are subject to high levels of variability that decrease productivity, increase cycle times and severely impact the systems tractability. As accurate modelling of the sources of variability is a cornerstone to intelligent decision making, we investigate the consequences of the assumption of independent and identically distributed variables that is often made when modelling sources of variability such as down-times, arrivals, or process-times. We first explain the experiment setting that allows, through simulations and statistical tests, to measure the variability potential stored in a specific sequence of data. We show from industrial data that dependent behaviors might actually be the rule with potentially considerable consequences in terms of cycle time. As complex industries require strong levers to allow their tractability, this work underlines the need for a richer and more accurate modelling of real systems. Keywords-variability; cycle time; dependent events; simulation; complex manufacturing; industry 4.0 I. Accurate modelling of variability and the independence assumption Industry 4.0 is said to be the next industrial revolution. The proper use of real-time information in complex manufacturing systems is expected to allow more customization of products in highly flexible production factories. Semiconductor High Mix Low Volume (HMLV) manufacturing facilities (called fabs) are one example of candidates for this transition towards "smart industries". However, because of the high levels of variability, the environment of a HMLV fab is highly stochastic and difficult to manage. The uncontrolled variability limits the predictability of the system and thus the ability to meet delivery requirements in terms of volumes, cycle times and due dates. Typically, the HMLV STMicroelectronics Crolles 300 fab regularly experiences significant mix changes that result in unanticipated bottlenecks, leading to firefighting to meet commitment to customers. The overarching goal of our strategy is to improve the forecasting of future occurrences of bottlenecks and cycle time issues in order to anticipate them through allocation of the correct attention and resources. Our current finite capacity projection engine can effectively forecast bottlenecks, but it does not include reliable cycle time estimates. In order to enhance our projections, better forecast cycle time losses (queuing times), improve the tractability of our system and reduce our cycle times, we now need accurate dynamic cycle time predictions. As increased cycle-time is the main reason workflow variability is studied (both by the scientific community and practitioners, see e.g. [1] and [2]), what follows concentrates on cycle times. Moreover, the "variability" we account for should be understood as the potential to create higher cycle times, even though "variability" may be understood in a broader meaning. This choice is made for the sake of clarity, but the methodology we propose and the discussion we lead can be applied to any other measurable indicator. Sources of variability have been intensely investigated in both the literature and the industry, and tool down-times, arrivals variability as well as process-time variability are recognized as the major sources of variability in that sense that they create higher cycle times (see [3] for a review and discussion). As a consequence, these factors are widely integrated into queuing formulas and simulation models with the objective to better model the complex reality of manufacturing facilities. One commonly accepted assumption in the development of these models is that the variables (MTBF, MTTR, processing times, time between arrivals, etc.) are independent and identically distributed (i.i.d.) random variables. However, these assumptions might be the reason for models inaccuracies as [4] points out in a literature review on queuing theory. Several authors have studied the potential effects of dependencies, such as [5] who studied the potential effects of dependencies between arrivals and process-times or [6] who investigated dependent process times, [4] also gives further references for studies on dependencies effects. In a previous work [3], we pinpointed a few elements from industrial data that questioned the viability of this assumption in complex manufacturing systems. Figure 1: Number of arrivals per week from real data (A) and generated by removing dependencies (B) 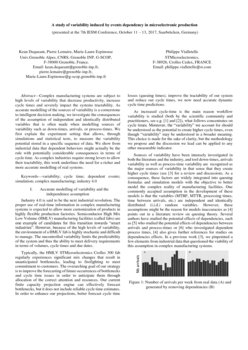 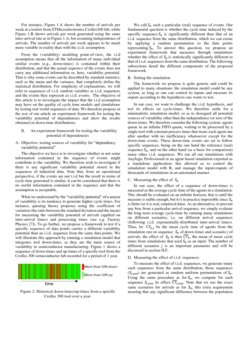 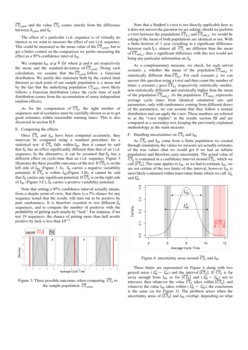 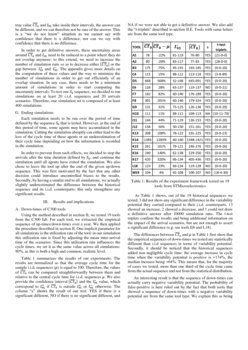