A Study of All-Convolutional Encoders for Connectionist Temporal Classification

Connectionist temporal classification (CTC) is a popular sequence prediction approach for automatic speech recognition that is typically used with models based on recurrent neural networks (RNNs). We explore whether deep convolutional neural networks (CNNs) can be used effectively instead of RNNs as the "encoder" in CTC. CNNs lack an explicit representation of the entire sequence, but have the advantage that they are much faster to train. We present an exploration of CNNs as encoders for CTC models, in the context of character-based (lexicon-free) automatic speech recognition. In particular, we explore a range of one-dimensional convolutional layers, which are particularly efficient. We compare the performance of our CNN-based models against typical RNNbased models in terms of training time, decoding time, model size and word error rate (WER) on the Switchboard Eval2000 corpus. We find that our CNN-based models are close in performance to LSTMs, while not matching them, and are much faster to train and decode. 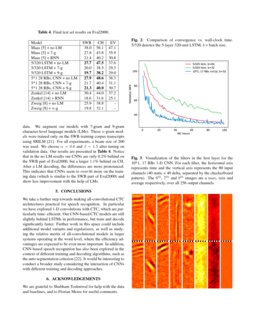 Most CTC-based models are based on variants of recurrent Long Short-Term Memory (LSTM) networks, sometimes including convolutional or fully connected layers in addition to the recurrent ones. More recently, a few purely convolutional approaches to CTC [9, 10] have been demonstrated to match or outperform LSTM counterparts. Purely convolutional networks have the advantage that they can be trained much faster, since all frames can be processed in parallel, whereas in recurrent networks the frames within an utterance cannot be naturally distributed across multiple processors.

We take a further step toward all-convolutional CTC models by exploring a variety of convolutional architectures trained with the CTC loss function and evaluating on conversational telephone speech (prior work evaluated on TIMIT, Wall Street Journal, and a corporate data set

While the ideas should apply to any CTC-based model and task, here we consider the task of lexicon-free conversational speech recognition using character-based models. We find that our best convolutional models are close to, but not quite matching, the best LSTM-based ones. However, the CNNs can be trained much faster, so that given a fixed training time budget (within a wide range), convolutional models typically outperform recurrent ones. Our trained CNN models also convert speech-to-text much faster than their trained recurrent counterparts. As the research community considers increasingly large tasks, such as whole-word CTC models [13, 14], computational efficiency is often a concern, especially with limited hardware resources. The efficiency of CNNs makes them an attractive option in these settings.

CTC is an approach to sequence labeling that uses a neural “encoder”, which maps from an input sequence of frame features x=(x1,x2,…,xT)

to a sequence of hidden state vectors

, followed by a softmax to produce posterior probabilities of frame-level labels (referred to as “CTC labels”)

p(πt|ht) for each label πt∈C. The posterior probability of a complete frame-level label sequence is taken to be the product of the frame posteriors:

The CTC label set C consists of all of the possible true output labels (in our case, characters) plus a “blank” symbol ϕ. Given a CTC label sequence, the hypothesized final label sequence is given by collapsing consecutive identical frame CTC labels and removing blanks. We use B(π) to denote the collapsing function. All of the model parameters are learned jointly using the CTC loss function, which is the log posterior probability of the training label sequence z=z1,z2…,zL given input sequence x,

Model parameters are learned using gradient descent; the gradient can be computed via a forward-backward technique [4].

Our CTC models operate at a character level. We use the special blank symbol ϕ along with a vocabulary of 45 characters which appear in the raw SWB corpus (26 letters, 10 digits, space, &, ’, -, [laughter], [vocalized-noise], [noise], / and _). These transcriptions were inherited from a Switchboard Kaldi [15] setup without text normalization. We remove punctuation and noise tokens during post-processing. Decoding with CTC models can be done in a number of ways, depending on whether one uses a lexicon and/or a word- or character-level language model (LM) [16]. Here we focus on two simple cases, greedy decoding with no language model and beam-search decoding with an n-gram character LM.

To decode without a language model, we take the most likely CTC output label at each frame and collapse the resulting frame label sequence to the corresponding character sequence. We also consider decoding with an n-gram language model (n=7,9) using a beam search decoding procedure. We decode with the objective,

where k=B(π), |k| denotes the length of k, and α, β are tunable parameters. The final decoded output is ^z=B(^π). Our beam-search method is the algorithm described in [5].111We account for <s> and </s> tokens during beam-search decoding (not explicitly mentioned in the beam search algorithm in [5]).

We refer to the neural network that maps from the input x to state vectors h as an encoder. We consider both a typical recurrent LSTM encoder and various convolutional encoders. Our input vectors are 40 log mel frequency filterbank features (static) concatenated with their first-order derivatives (delta).

Our recurrent encoder is a multi-layer bi-directional LSTM with a dropout layer between consecutive layers (with dropout rate 0.1). We concatenate every two consecutive input vectors (as in [2]), which reduces the time resolution by a factor of two and speeds up both the forward and backward pass.

For our all-CNN encoders, we consider 1-D CNN structures that convolve across time only. Each of the input acoustic feature dimensions is treated as a separate input channel. The first layer is a convolution followed by max-pooling across time (with a stride size 2), followed by several convolutional layers, and ending with two 512-unit fully connected layers and a final projection layer. Each convolution has 256 channels. We add batch normalization after every convolution, and include residual connections between every pair of convolutional layers after the max-pool

[19] non-linearity is used after every convolution, similar to the residual learning blocks in [17] (referred to as “ResBlocks (RBs)” in the rest of the paper). Fig. 1 portrays our architecture.

We use the Switchboard corpus (LDC97S62) [20], which contains roughly 300h of conversational telephone speech, as our training set. Following the Kaldi recipe [15], we reserve the first 4K utterances as a validation set. Since the training set has several repetitions of short utterances (like “uh-huh”), we remove duplicates beyond a count threshold of 300. The final training set has about 192K utterances. For evaluation, we use the HUB5 Eval2000 data set (LDC2002S09), consisting of two subsets: Switchboard (SWB), which is similar in style to the training set, and CallHome (CH), which contains conversations between friends and family.222Our Eval2000 setup has 4447 utterances, 11 utterances fewer than in some other papers. This discrepancy could result in an Eval2000 WER difference of 0.1-0.2%.

Our input filterbank features along with their deltas are normalized with per-speaker mean and variance normalization.

We conduct experiments on 1-D CNNs investigating variance in performance and time / epoch with network depth and filter size. These are given in Table 1 and Table 2. We notice that for the same number of trainable parameters deeper networks with smaller filters seem to perform the best. We noticed that smaller-filter deeper architectures over-fit less when compared to larger-filter architectures with the same number of trainable parameters. For a fixed network depth, a mid-sized filter performed best. We present a graph of convergence vs wall-clock time in Fig. 2. As expected, the CNNs train faster than LSTMs, and significantly faster at the same batch-size. We also notice significant speed-ups during greedy decoding of the Eval2000 corpus, as shown in Table 3.

We show some of the learned filters in Fig. 3. These filters show that the network learns derivative-like filter patterns across different input channels. Our 1-D convolution structure with filter size K*1 can be viewed as similar to a 2-D convolution with filter size K*80, since the 1-D filters are learned jointly. We also note the strong relation between filter patterns learned in the static and delta regions.

We evaluate our baseline LSTM and best performing CNN (5*1 filter with 28 RBs) on the Eval2000 corpus. We train each model to 50 epochs with early stopping on validation data. We augment our models with 7-gram and 9-gram character-level language models (LMs). These n-gram models were trained only on the SWB training corpus transcripts using SRILM [23]. For all experiments, a beam size of 200 was used. We choose α=0.6 and β=1.5 after tuning on validation data. Our results are presented in Table 4. Notice that in the no LM results our CNNs are only 0.2% behind on the SWB part of Eval2000, but a larger 1.1% behind on CH. After LM decoding, the differences are more pronounced. This indicates that CNNs seem to over-fit more on the training data (which is similar to the SWB part of Eval2000) and show less improvement with the help of LMs.

We take a further step towards making all-convolutional CTC architectures practical for speech recognition. In particular we have explored 1-D convolutions with CTC, which are particularly time-efficient. Our CNN-based CTC models are still slightly behind LSTMs in performance, but train and decode significantly faster. Further work in this space could include additional model variants and regularizers, as well as studying the relative merits of all-convolutional models in larger systems operating at the word level, where the efficiency advantages are expected to be even more important. In addition, CNN-based speech recognition has also been explored in the context of different training and decoding algorithms, such as the auto segmentation criterion [24]. It would be interesting to conduct a broader study considering the interaction of CNNs with different training and decoding approaches.

We are grateful to Shubham Toshniwal for help with the data and baselines, and to Florian Metze for useful comments.