A strong law of large numbers for scrambled net integration

This article provides a strong law of large numbers for integration on digital nets randomized by a nested uniform scramble. This strong law requires a square integrable integrand and it holds along a sequence of sample sizes of the form n=mb^k for m=1,...,M and k>0 and a base b>2. 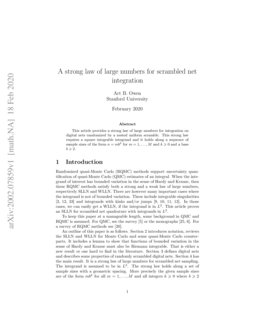 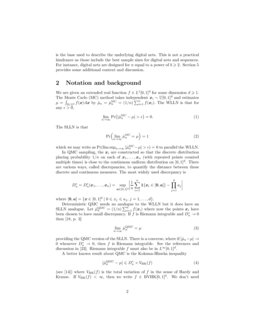 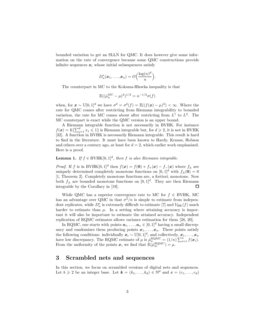 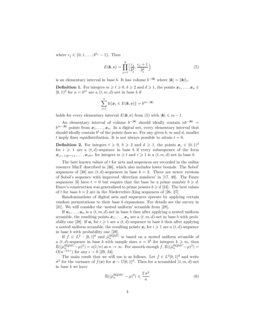 Randomized quasi-Monte Carlo (RQMC) methods support uncertainty quantification of quasi-Monte Carlo (QMC) estimates of an integral. When the integrand of interest has bounded variation in the sense of Hardy and Krause, then these RQMC methods satisfy both a strong and a weak law of large numbers, respectively SLLN and WLLN. There are however many important cases where the integrand is not of bounded variation. These include integrable singularities

To keep this paper at a manageable length, some background in QMC and RQMC is assumed. For QMC, see the survey [5] or the monographs [25, 6]. For a survey of RQMC methods see [20].

An outline of this paper is as follows. Section 2 introduces notation, reviews the SLLN and WLLN for Monte Carlo and some quasi-Monte Carlo counterparts. It includes a lemma to show that functions of bounded variation in the sense of Hardy and Krause must also be Riemann integrable. That is either a new result or one hard to find in the literature. Section 3 defines digital nets and describes some properties of randomly scrambled digital nets. Section 4 has the main result. It is a strong law of large numbers for scrambled net sampling. The integrand is assumed to be in L2. The strong law holds along a set of sample sizes with a geometric spacing. More precisely the given sample sizes are of the form mbk for all m=1,…,M and all integers k⩾0 where b⩾2 is the base used to describe the underlying digital nets. This is not a practical hindrance as those include the best sample sizes for digital nets and sequences. For instance, digital nets are designed for n equal to a power of b⩾2. Section 5 provides some additional context and discussion.

which we may write as Pr(limsupn→∞|^μMCn−μ|>ϵ)=0 to parallel the WLLN.

In QMC sampling, the xi

are constructed so that the discrete distribution placing probability

[0,1]d. There are various ways, called discrepancies, to quantify the distance between these discrete and continuous measures. The most widely used discrepancy is

Deterministic QMC needs no analogue to the WLLN but it does have an SLLN analogue. Let ^μQMCn=(1/n)∑ni=1f(xi) where now the points xi have been chosen to have small discrepancy. If f is Riemann integrable and D∗n→0 then [18, p. 3]

providing the QMC version of the SLLN. There is a converse, where if |^μn−μ|→0 whenever D∗n→0, then f is Riemann integrable. See the references and discussion in [23]. Riemann integrable f must also be in L∞[0,1]d.

A better known result about QMC is the Koksma-Hlawka inequality

(see [14]) where VHK(f) is the total variation of f in the sense of Hardy and Krause. If VHK(f)<∞, then we write f∈BVHK[0,1]d. We don’t need bounded variation to get an SLLN for QMC. It does however give some information on the rate of convergence because some QMC constructions provide infinite sequences xi whose initial subsequences satisfy

The counterpart in MC to the Koksma-Hlawka inequality is that

If f∈BVHK[0,1]d, then f is also Riemann integrable.

While QMC has a superior convergence rate to MC for f∈BVHK, MC has an advantage over QMC in that σ2/n is simple to estimate from independent replicates, while D∗n is extremely difficult to estimate [7] and VHK(f) much harder to estimate than μ

. In a setting where attaining accuracy is important it will also be important to estimate the attained accuracy. Independent replication of RQMC estimates allows variance estimation for them

In RQMC, one starts with points a1,…,an∈[0,1]d having a small discrepancy and randomizes them producing points x1,…,xn. These points satisfy the following conditions: individually xi∼U[0,1]d, and collectively, x1,…,xn have low discrepancy. The RQMC estimate of μ is ^μRQMCn=(1/n)∑ni=1f(xi). From the uniformity of the points xi we find that E(^μRQMCm)=μ.

is an elementary interval in base b. It has volume b−|k| where |k|=∥k∥1.

The best known values of t for nets and sequences are recorded in the online resource MinT described in [36], which also includes lower bounds. The Sobol’ sequences of [38] are (t,d)-sequences in base b=2. There are newer versions of Sobol’s sequence with improved ‘direction numbers’ in [17, 40]. The Faure sequences [8] have t=0 but require that the base be a prime number b⩾d. Faure’s construction was generalized to prime powers b⩾d [24]. The best values of t for base b=2 are in the Niederreiter-Xing sequences of [26, 27].

Randomizations of digital nets and sequences operate by applying certain random permutations to their base b expansions. For details see the survey in [31]. We will consider the ‘nested uniform’ scramble from [28].

for some Γ<∞ [30, Theorem 1]. The RQMC estimate for these scrambled nets cannot have more than Γ times the mean squared error that MC has. The value of Γ is found using some conservative upper bounds. We can use Γ=bt[(b+1)/(b−1)]s. If t=0 this can be reduced to [b/(b−1)]s, and for d=1 it can be reduced to bt. The quantity Γ arises as an upper bound on an infinite set of ‘gain coefficients’ relating the RQMC variance to the MC variance for parts of a basis expansion of f.

If f∈BVHK[0,1]d, then there is an SLLN for RQMC from the Koksma-Hlawka inequality (4) because the RQMC points have Pr(limn→∞D∗n(x1,…,xn)=0)=1. The same argument handles the more general case of Riemann integrable f.

An SLLN is more complicated. We will provide one for points taken from a scrambled digital sequence using a subset of sample sizes. For integers b⩾2 and M⩾1, let

Denote the unique elements of N by nℓ for ℓ∈N with n1<n2<⋯. The m used in sample sizes should not be confused with the m used in the definition of nets.

Restricting the sample sizes is not a serious impediment to using RQMC. It is actually a best practice when the point sets are designed for sample sizes equal to a power of a prime number. Sobol’ [39] recommends considering sample sizes in a geometric progression such as nℓ=2ℓ, not an arithmetic one. One of his points is that when errors smaller than o(1/n) are possible they cannot be expected to occur at consecutive sample sizes n and n+1 for then the n+1’st point on its own would be unrealistically good. See [35] for more details on how rate optimal sample sizes for equal weight rules must be geometrically spaced. The empirical results for scrambled Faure sequences in [28] were noticeably better for sample sizes n=bm. Scrambled net variances are not necessarily monotone in n. For instance, with f(x)=1{x<1/2} for x∈[0,1] scrambled van der Corput points (a (0,1)-sequence in base 2) have variance 0 for even n

but not for odd

for any set of sample sizes nℓ of the form N(b,M).

Then because the correlations among ^μr,k cannot be larger than one,

For any ϵ>0, Chebychev’s inequality yields

The second inequality above is not necessarily an equality because summing over k and m may count some nℓ more than once. Because that sum is finite, Pr(|^μℓ−μ|>ϵ\ infinitely many ℓ)=0 by the Borel-Cantelli lemma. Therefore Pr(^μnℓ→μ)=1. ∎

A (t,d)-sequence in base b is extensible in that after using n points of the sequence we can obtain an n′>n point rule by simply adjoining the next n′−n points in the sequence. We can get an SLLN for a non-extensible “triangular array” construction where the points in the rule with n=nℓ are not necessarily also used for n′=nℓ′ for ℓ′>ℓ. For ℓ∈N let xℓ,i,…,xℓ,nℓ be the union of Mℓ digital nets, each with gain coefficient Γℓ<∞, and given a nested uniform scramble. Then the proof in Theorem 2 will go through so long as

f∈L2[0,1]d instead of just f∈L1[0,1]d, and it uses a strict subset of sample sizes n instead of all n⩾1. The SLLN in Theorem 2 applies to a sufficiently large collection of sample sizes for applications. It would be useful to weaken the assumption that f∈L2[0,1]d. Even a WLLN for f∈Lp[0,1]d for some p∈[1,2), especially p=1, would be valuable.

) on gain coefficients, so the methods used here would not provide an SLLN for it. The nested uniform scramble is the only one for which central limit theorems have been proved

A second major family of RQMC methods has been constructed from lattice rules [37]. Points a1,…,an on a lattice in [0,1]d are randomized into xi=ai+umod1, for u∼U[0,1]d. That is, they are shifted with wraparound in what is known as a Cranley-Patterson rotation [4]. For an extensible version of shifted lattice rules, see [15]. The Cranley-Patterson rotation does not provide a Γ bound like (6) because there are functions f∈L2[0,1]d with var(^μRQMCn)=σ2(f) [20], and so a proof of an SLLN for this form of RQMC would require a different approach. The fact that var(^μRQMCn)=σ2(f) is possible does not provide a counter-example to an SLLN because this equality might only hold for a finite number of nℓ in the infinite sequence. Given a class of functions F with var(^μRQMCnℓ)⩽Bσ2(f)/nℓ for all f∈F, all ℓ⩾1, and some B<∞, we get an SLLN for f∈F if ∑∞ℓ=11/nℓ<∞. Some such bounds B for randomly shifted lattices appear in [20] though they hold for specific nℓ not necessarily an infinite sequence of them.

I thank Max Balandat for posing the problem of finding and SLLN for randomized QMC. This work was supported by grant IIS-1837931 from the U.S. National Science Foundation.