After presentations of Raz and Tal's oracle separation of BQP and PH result, several people (e.g. Ryan O'Donnell, James Lee, Avishay Tal) suggested that the proof may be simplified by stochastic calculus. In this short note, we describe such a simplification. 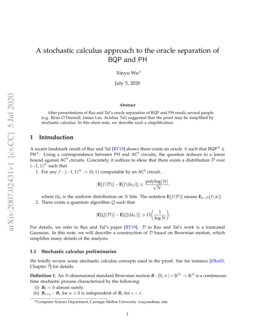 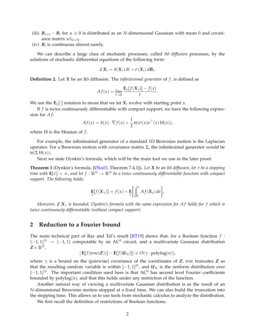 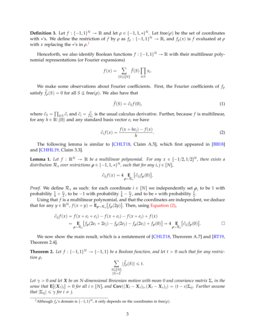 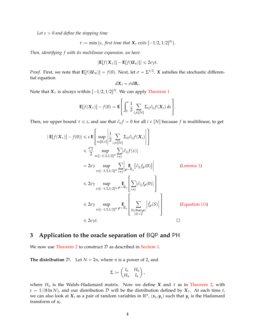 A recent landmark result of Raz and Tal [RT19] shows there exists an oracle A such that \BQPA⊈\PHA. Using a correspondence between \PH and \AC0 circuits, the question reduces to a lower bound against \AC0 circuits. Concretely, it suffices to show that there exists a distribution \calD over {−1,1}N such that

For details, we refer to Raz and Tal’s paper [RT19]. \calD in Raz and Tal’s work is a truncated Gaussian. In this note, we will describe a construction of \calD based on Brownian motion, which simplifies many details of the analysis.

We briefly review some stochastic calculus concepts used in the proof. See for instance [Øks03, Chapter 7] for details.

An N-dimensional standard Brownian motion \bB:[0,∞)\x\RN→\RN is a continuous-time stochastic process characterized by the following:

Let \bX be an / diffusion. The infinitesimal generator of f, is defined as

We use the \Ex[⋅] notation to mean that we let \bXt evolve with starting point x.

If f is twice continuously differentiable with compact support, we have the following expression for Af:

Next we state Dynkin’s formula, which will be the main tool we use in the later proof. [Dynkin’s formula, [Øks03, Theorem 7.4.1]] Let \bX be an / diffusion, let τ be a stopping time with \E[τ]<∞, and let f:\RN→\RN be a twice continuously differentiable function with compact support. The following holds:

Moreover, if \bXτ is bounded, Dynkin’s formula with the same expression for Af holds for f which is twice continuously differentiable (without compact support).

2 Reduction to a Fourier bound

circuit, and a multivariate Gaussian distribution

where γ is a bound on the (pairwise) covariance of the coordinates of \bZ, trnc truncates \bZ

so that the resulting random variable is within

[−1,1]N, and \bUN is the uniform distribution over {−1,1}N. The important condition used here is that AC0 has second level Fourier coefficients bounded by \polylog(n), and that this holds under any restriction of the function.

Another natural way of viewing a multivariate Gaussian distribution is as the result of an N-dimensional Brownian motion stopped at a fixed time. We can also build the truncation into the stopping time. This allows us to use tools from stochastic calculus to analyze the distribution.

where ∂S=∏i∈S\pti and \pti=∂∂xi is the usual calculus derivative. Further, because f is multilinear, for any h∈\R∖{0}

and any standard basis vector

We define \calRx as such: for each coordinate i∈[N] we independently set \brhoi to be 1

Using that f is a multilinear polynomial, and that the coordinates are independent, we deduce that for any y∈\RN, f(x+y)=\E\brho∼\calRx\bracks∗f\brho(2y). Then, using Equation 2,

Then, identifying f with its multilinear expansion, we have

Then, we upper bound τ≤\ep, and use that \ptiif=0 for all i∈[N] because f is multilinear, to get

3 Application to the oracle separation of \Bqp and \Ph

We now use Section 2 to construct \calD as described in Section 1.

where Hn is the Walsh–Hadamard matrix. Now we define \bX and τ as in Section 2, with \ep=1/(8lnN), and our distribution \calD will be the distribution defined by \bXτ. At each time t, we can also look at \bXt as a pair of random variables in \Rn, (\bxt,\byt) such that \byt is the Hadamard transform of \bxt.

Tal showed that [Tal17, Theorem 37] there exists a universal constant c such that every function f:{−1,1}N→{−1,1} computable by an \AC0 circuit with at most (lnN)ℓ gates and depth d satisfies

Since \AC0 is closed under restrictions, we can apply Section 2 with \ep=1/(8lnN) and γ=1√n, to deduce that

Finally, we show that a quantum algorithm can distinguish \calD from the uniform distribution. This is virtually identical to the argument in [RT19, Section 6], but we can again use some stochastic calculus tools on the stopping time built into the distribution. Using the Forrelation query algorithm, there is a quantum algorithm Q with inputs x,y∈{−1,1}n which accepts with probability (1+ϕ(x,y))/2, where

We show the following proposition [RT19, Claim 6.3], which implies the existence of a O(logN)-time quantum algorithm distinguishing \calD from uniform with one query. The quantum algorithm is described in more detail in [Aar10, Section 3.2]. \E(\bx,\by)∼\calD[ϕ(\bx,\by)]≥\ep4.

By the linearity of expectation and optional sampling theorem,

I would like to thank Ryan O’Donnell and Avishay Tal for helpful discussions and their suggestions concerning an early draft. Thanks also to Gregory Rosenthal and anonymous reviewers for helpful comments.