A Stay-in-a-Set Game without a Stationary Equilibrium

We give an example of a finite-state two-player turn-based stochastic game with safety objectives for both players which has no stationary Nash equilibrium. This answers an open question of Secchi and Sudderth. 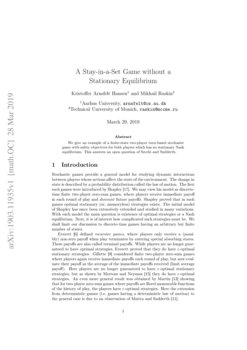 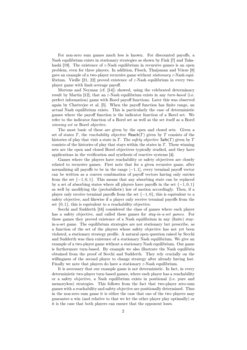 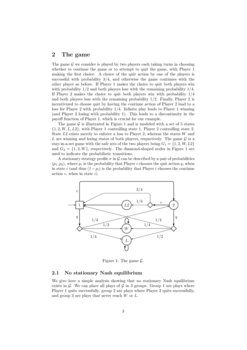 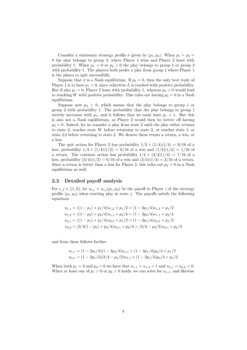 We investigate the effect of information asymmetry on a dynamic Cournot ...
Masahiko Ueda, et al. ∙

Back to Square One: Superhuman Performance in Chutes and Ladders Through Deep Neural Networks and Tree Search

A Fragile CPR Game is an instance of a resource sharing game where a com...
Christos Pelekis, et al. ∙

Stochastic games provide a general model for studying dynamic interactions between players whose actions affect the state of the environment. The change in state is described by a probability distribution called the law of motion. The first such games were introduced by Shapley

[17]. We may view his model as discrete-time finite two-player zero-sum games, where players receive immediate payoff in each round of play and discount future payoffs. Shapley proved that in such games optimal stationary (or, memoryless) strategies exists. The initial model of Shapley has since been extensively extended and studied in many variations. With each model the main question is existence of optimal strategies or a Nash equilibrium. Next, it is of interest how complicated such strategies must be. We shall limit our discussion to discrete-time games having an arbitrary but finite number of states.

Everett [6] defined recursive games, where players only receive a (possibly) non-zero payoff when play terminates by entering special absorbing states. These payoffs are also called terminal payoffs. While players are no longer guaranteed to have optimal strategies, Everett proved that they do have ε-optimal stationary strategies. Gillette [9] considered finite two-player zero-sum games where players again receive immediate payoffs each round of play, but now evaluate their payoff as the average of the immediate payoffs received (limit average payoff). Here players are no longer guaranteed to have ε-optimal stationary strategies, but as shown by Mertens and Neyman [15] they do have ε-optimal strategies. An even more general result was obtained by Martin [13] showing that for two-player zero-sum games where payoffs are Borel measurable functions of the history of play, the players have ε-optimal strategies. Here the extension from deterministic games (i.e. games having a deterministic law of motion) to the general case is due to an observation of Maitra and Sudderth [11].

Mertens and Neyman (cf. [14]) showed, using the celebrated determinacy result by Martin [12], that an ε-Nash equilibrium exists in any turn-based (i.e. perfect information) game with Borel payoff functions. Later this was observed again by Chatterjee et al. [5]. When the payoff function has finite range, an actual Nash equilibrium exists. This is particularly the case of deterministic games where the payoff function is the indicator function of a Borel set. We refer to the indicator function of a Borel set as well as the set itself as a Borel winning set or Borel objective.

Games where the players have reachability or safety objectives are closely related to recursive games. First note that for a given recursive game, after normalizing all payoffs to be in the range [−1,1]

, every terminal payoff vector can be written as a convex combination of payoff vectors having only entries from the set

It is necessary that our example game is not deterministic. In fact, in every deterministic two-player turn-based games, where each player has a reachability or a safety objective, a Nash equilibrium exists in positional (i.e. pure and memoryless) strategies. This follows from the fact that two-player zero-sum games with a reachability and safety objective are positionally determined. Thus in the non-zero sum game it is either the case that one of the two players may guarantee a win (and relative to that we let the other player play optimally) or it is the case that both players can ensure that the opponent loses.

The game G is illustrated in Figure 1 and is modeled with a set of 5 states {1,2,W,L,L2}, with Player 1 controlling state 1, Player 2 controlling state 2. State L2 exists merely to enforce a loss to Player 2, whereas the states W and L are winning and losing states of both players, respectively. The game G is a stay-in-a-set game with the safe sets of the two players being G1={1,2,W,L2} and G2={1,2,W}, respectively. The diamond-shaped nodes in Figure 1 are used to indicate the probabilistic transitions.

Consider a stationary strategy profile σ given by (p1,p2). When p1=p2=0 the play belongs to group 3, where Player 1 wins and Player 2 loses with probability 1. When p1>0 or p2>0 the play belongs to group 1 or group 2 with probability 1. The players both prefer a play from group 1 where Player 1 is the player to quit successfully.

Suppose now p2>0, which means that the play belongs to group 1 or group 2 with probability 1. The probability that the play belongs to group 1 strictly increases with p1, and it follows that we must have p1=1. But this is also not a Nash equilibrium, as Player 2 would then be better off having p2=0. Indeed, let us consider a play from state 2 until the play either returns to state 2, reaches state W before returning to state 2, or reaches state L or state L2 before returning to state 2. We denote these events a return, a win, or a loss.

For i,j∈{1,2}, let ui,j=ui,j(p1,p2) be the payoff to Player i of the strategy profile (p1,p2) when starting play in state j. The payoffs satisfy the following equations

and from these follows further

Using ∂∂xax+bcx+d=ad−bc(cx+d)2, we find that

We give here two examples of Nash equilibria in the game following the general result of Secchi and Sudderth [16]. The idea is that once Player 2 has lost by entering state L2 the incentive of Player 2 is removed and all strategies are equally good.

Whereas we have shown that the game G has no stationary Nash equilibrium, it does have ε-Nash equilibria, for any ε>0.

Several related open questions concern games with reachability objectives or with combinations of reachability and safety objectives. We first consider the setting where all players have reachability objectives, also called reach-a-set games [5]. Flesch, Thuijsman and Vrieze [8] give an example of a three-player recursive game with non-negative payoffs with no stationary ε-Nash equilibrium. The game is furthermore deterministic. Simon [18] gave an example of a two-player recursive game with non-negative payoffs with no stationary ε-Nash equilibrium. These both give examples of reach-a-set games without stationary ε-Nash equilibria by the general method of simulating terminal payoffs with the probabilistic law of motion. The example of Flesch, Thuijsman and Vrieze is however such that the terminal payoff vectors satisfy that either none or precisely two players receive a strictly positive payoff. The payoff vectors where two players receive strictly positive payoff can (after scaling) be constructed as unique equilibrium payoffs of win-lose bimatrix games 111These payoff vectors are (1,1) and (3,1). It is easy to construct two 4×4 bimatrix games with only payoffs from the set {0,1} in which the unique equlibrium payofff vectors are (14,14) and (34,14), respectively, which may replace (1,1) and (3,1). This then results in a three-player deterministic reach-a-set game with no stationary ε-Nash equilibrium.

Little is known when some players have a reachability objective and some players a safety objectives. In the two-player zero-sum case an example of Everett [6] shows that optimal strategies, and hence a Nash equilibrium, may fail to exist. On the other hand an ε-optimal stationary equilibrium always exists. Do every two-player game where one player has a reachability objective and one player a safety objetive always have a stationary ε-Nash equilibrium? In the case of turn-based games, it is an open problem whether every three-player deterministic game has a stationary Nash equilibrium. An example given by Boros et al. [2] appears to be close to answer this question. Namely, Boros et al. construct a three-player deterministic recursive game without a stationary Nash equilibrium, that may be realized with payoffs such that player two has only non-negative terminal payoffs and player one and player three have only non-positive terminal payoffs.