When the singular values of the evolution operator are all smaller or all greater than one, stable integration algorithms are obtained either by explicit or implicit methods. When the singular spectrum mixes greater and smaller than one values, neither explicit nor implicit methods insure stabilty. The problem is solved by using a splitting of the evolution operator and a semi-implicit scheme. The method is illustrated in the study of a two-field model of the tokamak scrape-off layer. 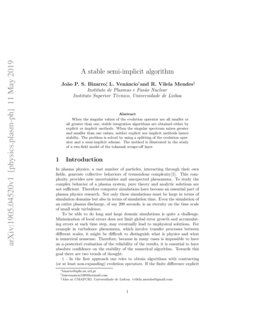 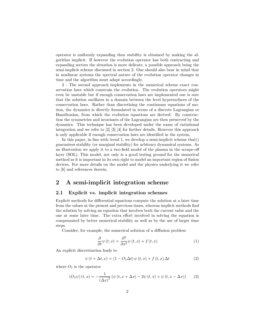 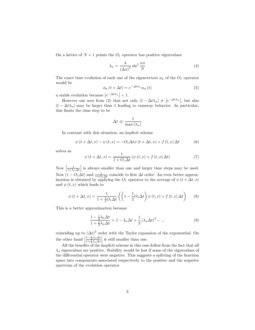 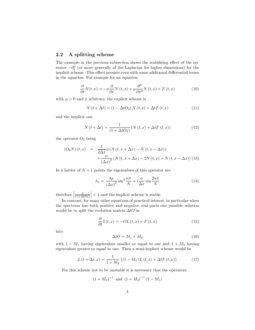 Two-level schemes for the advection equation

This paper deals with the efficient numerical solution of the two-dimens...
Lynn Boen, et al. ∙

In plasma physics, a vast number of particles, interacting through their own fields, generate collective behaviors of tremendous complexity[1]. This complexity provides new uncertainties and unexpected phenomena. To study the complex behavior of a plasma system, pure theory and analytic solutions are not sufficient. Therefore computer simulations have become an essential part of plasma physics research. Not only these simulations must be large in terms of simulation domains but also in terms of simulation time. Even the simulation of an entire plasma discharge, of say 200 seconds, is an eternity on the time scale of small scale turbulence.

To be able to do long and large domain simulations is quite a challenge. Minimization of local errors does not limit global error growth and accumulating errors at each time step, may eventually lead to unphysical solutions. For example in turbulence phenomena, which involve transfer processes between different scales, it might be difficult to distinguish what is physics and what is numerical nonsense. Therefore, because in many cases is impossible to have an a-posteriori evaluation of the reliability of the results, it is essential to have absolute confidence on the stability of the numerical algorithm. Towards this goal there are two trends of thought:

1 - In the first approach one tries to obtain algorithms with contracting (or at least non-expanding) evolution operators. If the finite difference explicit operator is uniformly expanding then stability is obtained by making the algorithm implicit. If however the evolution operator has both contracting and expanding sectors the situation is more delicate, a possible approach being the semi-implicit scheme discussed in section 2. One should also bear in mind that in nonlinear systems the spectral nature of the evolution operator changes in time and the algorithm must adapt accordingly.

2 - The second approach implements in the numerical scheme exact conservation laws which constrain the evolution. The evolution operators might even be unstable but if enough conservation laws are implemented one is sure that the solution oscillates in a domain between the level hypersurfaces of the conservation laws. Rather than discretizing the continuum equations of motion, the dynamics is directly formulated in terms of a discrete Lagrangian or Hamiltonian, from which the evolution equations are derived. By construction the symmetries and invariants of the Lagrangian are then preserved by the dynamics. This technique has been developed under the name of variational integration and we refer to [2] [3] [4] for further details. However this approach is only applicable if enough conservation laws are identified in the system.

In this paper, in line with trend 1, we develop a semi-implicit scheme that() guarantees stability (or marginal stability) for arbitrary dynamical systems. As an illustration we apply it to a two-field model of the plasma in the scrape-off layer (SOL). This model, not only is a good testing ground for the numerical method as it is important in its own right to model an important region of fusion devices. For more details on the model and the physics underlying it we refer to [6] and references therein.

Explicit methods for differential equations compute the solution at a later time from the values at the present and previous times, whereas implicit methods find the solution by solving an equation that involves both the current value and the one at some later time. The extra effort involved in solving the equation is compensated by better numerical stability as well as by the use of larger time steps.

Consider, for example, the numerical solution of a diffusion problem

An explicit discretization leads to

where O1 is the operator

The exact time evolution of each one of the eigenvectors

ϕn of the O1 operator would be

a stable evolution because ∣∣e−Δtλn∣∣<1.

However one sees from (2) that not only |1−Δtλn|≠∣∣e−Δtλn∣∣, but also |1−Δtλn| may be larger than 1 leading to runaway behavior. In particular, this limits the time step to be

In contrast with this situation, an implicit scheme

Now ∣∣11+λnΔt∣∣ is always smaller than one and larger time steps may be used. Now (1−O1Δt) and 11+O1Δt coincide to first Δt order. An even better approximation is obtained by applying the O1 operator to the average of ψ(t+Δt,x) and ψ(t,x) which leads to

This is a better approximation because

coinciding up to (Δt)2 order with the Taylor expansion of the exponential. On the other hand ∣∣∣1−12λnΔt1+12λnΔt∣∣∣ is still smaller than one.

All the benefits of the implicit scheme in this case follow from the fact that all λn eigenvalues are positive. Stability would be lost if some of the eigenvalues of the differential operator were negative. This suggests a splitting of the function space into components associated respectively to the positive and the negative spectrum of the evolution operator.

The example in the previous subsection shows the stabilizing effect of the operator −∂2x (or more generally of the Laplacian for higher dimensions) for the implicit scheme. This effect persists even with some additional differential terms in the equation. For example for an equation

with μ>0 and ϕ arbitrary, the explicit scheme is

and the implicit one

the operator O2 being

therefore ∣∣1(1+ΔtO2)∣∣<1 and the implicit scheme is stable.

In contrast, for many other equations of practical interest, in particular when the spectrum has both positive and negative real parts one possible solution would be to split the evolution matrix ΔtO in

be non-expansive. One discusses this question in the context of finite-dimensional matrices. Given a norm |∙| in Rn, for example the Euclidean norm,

is the matrix norm induced by |∙|. A matrix M is said to be non-expansive if

A matrix is non-expansive if ∥M∥≤1 for the induced norm [5].

(i) Suppose first that the matrix can be diagonalized with eigenvalues (λ1,λ2,⋯,λn). Then it is always possible to decompose it

and decompose the diagonal matrix D into D=D1+D2.

Now, given an eigenvalue λ of D if Reλ≥0 this eigenvalue is assigned to D2 because |1+λ|≥1.

If Reλ<0 one has two possibilities. If |1+λ|≥1 it is assigned to D2. Otherwise decompose

(ii) If the matrix M

is not diagonalizable, for example if it is a singular matrix as it very frequently happens in practical situations, one uses a singular value decomposition

where U and V are orthogonal matrices and S is a diagonal matrix with diagonal elements ρi≥0. Notice that the ρi’s are the eigenvalues of MMT or MTM and, denoting by {ui} and {vi} the normalized columns of U and V,

Let now μ=min{ρi} and from

This lemma insures the feasibility of the semi-implicit scheme. From the proof it is also clear that the decomposition is not necessarily unique and may, to some extent, still be adjusted to other numerical conveniences. Notice also that (1−M1) and (1+M2)−1 would be contractive if μ>0.

As an illustration, in the following section the semi-implicit scheme will be used to develop a numerical code for a model of the scrape-off layer of tokamak plasmas.

3 Example: A two-field model of the SOL

A numerical code was developed for the conservative part of a two-field model of the SOL [6], namely

The two fields L(x1,x2) and ϕ(x1,x2) (log-density and potential) are defined in a bounded two dimensional space and ∇⊥=(−∂2,∂1). The full model contains also loss, diffusion and source terms, but it is the conservative part that is responsible for the main dynamical features of the model [6]. The system (22) is conservative in the sense that it is a non-canonical Hamiltonian system with Hamiltonian

the equations (22) being obtained from H by

However, no invariants other than the Hamiltonian are explicitly known, which hinders the applicability of variational techniques to the numerical simulation. Nevertheless, we also impose energy conservation on our semi-implicit code.

dimensional vectors which evolve according to

M and M′ being the ϕ−dependent operators

The N2×N2 matrices that must be split, if they are expansive, are

The splitting guarantees that all evolution directions are either stable or marginally stable. We also correct for some numerical drift on energy by a small change on the magnitude of L and ϕ at each evolution step. This is equivalent (but simpler) to the general scheme proposed by Shadwick, Bowan and Morrison [7] [8] who add to the dynamical equations extra terms to compensate for the numerical drift of the constants of motion.

We have run the code for a number of different initial conditions and the algorithm shows great stability for large times. Notice that the size of the dt step affects precision but not stability because it is included in the matrix that is split. An important problem when analyzing solutions of models for physical phenomena is the stability of the solutions under small random perturbations, because that is what one expects to be the real world situation. Of course to judge the effect of the perturbations on the solutions it is important to have a stable simulation algorithm without which it would be difficult to distinguish between the effect of the perturbations and numerical instabilities. Our stable algorithm is particularly adequate to deal with this problem and, in particular, to test whether in conservative complex differential systems there are preferential large scale structures which remain stable under stable perturbations. The role of selection of large scale structures by invariance under random perturbation of invariant measures and solutions has been explored in the Euler context elsewhere [9]. Here we explore the possible emergence of this phenomenon for the two-field model by starting from a periodic exact solution of (22), namely

From this as an initial condition (at t=0) we make it evolve with, at each time step, the addition of a symmetrical random perturbation. The result of one such simulation is shown in Fig.2 which shows snapshots of the evolution of the log-density taken at 1, 50, 100, 200, 300 and 400 evolution steps with dt=0.0001.

Without random perturbations the pattern shown in the upper left corner simply translates in time. This is what follows from the exact solution (31), also checked by the application of our algorithm. With the random perturbation the pattern eventually becomes unstable and converges to a concentrated pattern shown in the last plot, which is then very stable for a long time. Inspired by the theory developed in [9], we might conjecture that this type of approximate stochastic stable patterns are those compatible with a unique stochastically stable invariant measure which depends on the boundary conditions. The emergence of these quasi-stable large scale structures associated to large density concentrations are of great relevance for plasma physics [6].