We propose a simple procedure to test for changes in correlation matrix at an unknown point in time. This test requires constant expectations and variances, but only mild assumptions on the serial dependence structure. We test for a breakdown in correlation structure using eigenvalue decomposition. We derive the asymptotic distribution under the null hypothesis and apply the test to stock returns. We compute the power of our test and compare it with the power of other known tests. 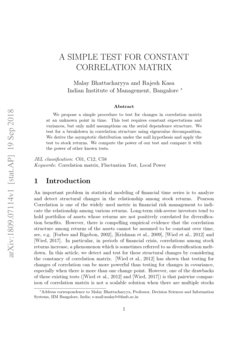 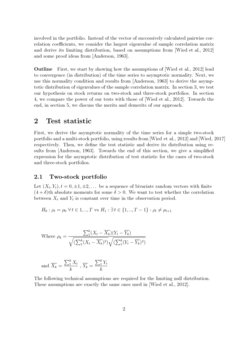 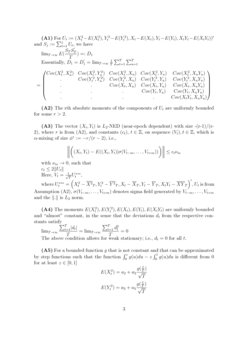 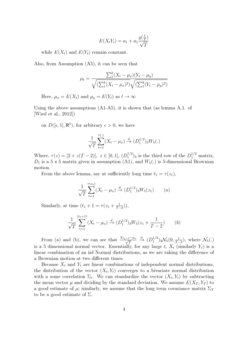 How to avoid the zero-power trap in testing for correlation

In testing for correlation of the errors in regression models the power ...
David Preinerstorfer, et al. ∙

This paper is concerned with testing and dating structural breaks in the...
Florian Stark, et al. ∙

The Asymptotic Distribution of Modularity in Weighted Signed Networks

Biclustering is a method for detecting homogeneous submatrices in a give...
Chihiro Watanabe, et al. ∙

An important problem in statistical modeling of financial time series is to analyze and detect structural changes in the relationship among stock returns. Pearson Correlation is one of the widely used metric in financial risk management to indicate the relationship among various returns. Long-term risk-averse investors tend to hold portfolios of assets whose returns are not positively correlated for diversification benefits. However, there is compelling empirical evidence that the correlation structure among returns of the assets cannot be assumed to be constant over time, see, e.g. [Forbes and Rigobon, 2002], [Krishnan et al., 2009], [Wied et al., 2012] and [Wied, 2017]. In particular, in periods of financial crisis, correlations among stock returns increase, a phenomenon which is sometimes referred to as diversification meltdown. In this article, we detect and test for these structural changes by considering the constancy of correlation matrix. [Wied et al., 2012] has shown that testing for changes of correlation can be more powerful than testing for changes in covariance, especially when there is more than one change point. However, one of the drawbacks of these existing tests ([Wied et al., 2012] and [Wied, 2017]

First, we start by showing how the assumptions of [Wied et al., 2012] lead to convergence (in distribution) of the time series to asymptotic normality. Next, we use this normality condition and results from [Anderson, 1963] to derive the asymptotic distribution of eigenvalues of the sample correlation matrix. In section 3, we test our hypothesis on stock returns on two-stock and three-stock portfolios. In section 4, we compare the power of our tests with those of [Wied et al., 2012]. Towards the end, in section 5, we discuss the merits and demerits of our approach.

First, we derive the asymptotic normality of the time series for a simple two-stock portfolio and a multi-stock portfolio, using results from [Wied et al., 2012] and [Wied, 2017]

respectively. Then, we define the test statistic and derive its distribution using results from

[Anderson, 1963]. Towards the end of this section, we give a simplified expression for the asymptotic distribution of test statistic for the cases of two-stock and three-stock portfolios.

th absolute moments for some

δ>0. We want to test whether the correlation between Xt and Yt is constant over time in the observation period.

(A2) The rth absolute moments of the components of Ut are uniformly bounded for some r>2.

(A4) The moments E(X2t),E(Y2t),E(Xt),E(Yt),E(XtYt) are uniformly bounded and “almost” constant, in the sense that the deviations dt from the respective constants satisfy

The above condition allows for weak stationary; i.e., dt=0 for all t.

(A5) For a bounded function g that is not constant and that can be approximated by step functions such that the function ∫z0g(u)du−z∫10g(u)du is different from 0 for at least z∈[0,1]

Also, from Assumption (A5), it can be seen that

From the above lemma, say at sufficiently long time t1=τ(z1),

) is a linear combination of an iid Normal distributions, as we are taking the difference of a Brownian motion at two different times.

and dividing by the standard deviation. We assume

to a good estimate of

μ; similarly, we assume that the long term covariance matrix ΣT to be a good estimate of Σ.

Again, similar to the two-stock portfolio case, Sj:=∑jt=1Ut, we have

Asymptotic distribution of the eigenvalues of sample covariance matrix is derived in equations (2.1 - 2.13) of [Anderson, 1963]. The theorem and results are as follows:

If the largest eigenvalue, λ, has a multiplicity of q instead of p, where q≤p, then test statistic is slightly modified as H=√t(Dt−λI), where Dt is the q x q sample eigenvalue diagonal matrix and I is the q x q identity matrix. The distribution of H is same as the one given above in (1) with p replaced by q. For example, when the maximum eigenmultiplicity is just 1 (the case when all the eigenvalues are unique), our equation (1) simplifies to

We can simplify the above distribution (1) for the simple case of two-stock portfolio, i.e. p=2. Let Xα=(Xt,Yt), where Xt,Yt are standardized returns. Also, let At=∑t1XαX′α. The correlation matrix, AT, at time T can be represented as

and the corresponding eigenvectors are

The sample Correlation matrix, At, at time t is

Also, let Dt be the largest eigenvalue of At

The test statistic is

where, Dt,DT are the maximum eigenvalues at times t and T respectively.

From equation (2), we can see that the asymptotic distribution of ht is

In this subsection, we derive the expression for asymptotic distribution (1) for a three-stock portfolio, i.e. p=3. Let Xα=(Xt,Yt,Zt), where Xt,Yt,Zt are standardized returns. Also, let At=∑t1XαX′α. The correlation matrix, AT, at time T can be represented as

The characteristic equation for the above matrix is

Solving for λ in equation (3), gives the eigenvalues of the correlation matrix AT.

where θ=cos−1(R√−Q3) Similarly, we can find the roots D1,t,D2,t,D3,t corresponding to the correlation matrix, At, at time t. Let D1,T and D1,t be the smallest roots corresponding to AT and At respectively. As this is the case of multiplicity being 1, from equation (2), we can see that the asymptotic distribution of ht(=√t(D1,T−D1,t)) is

First, we test our hypothesis on the same stocks considered in [Wied et al., 2012]; As seen from Figure 1, the highest value of the |ht| is 3.79, which coincides with the collapse of Lehman Brothers around 18 September, 2008, is slightly greater than the critical value for 90% confidence level.

Next, we test our hypothesis using a three-stock portfolio for two cases. In case (i), we have two American Indices (SNP 500 and DOWJones) and a German Index (DAX). In case (ii), we have indices from US, Germany and Japan (SNP, DAX and Nikkei respectively). As expected, it can be seen from Figure 2, the correlation structure has been disturbed more in case(ii), where all the indices are from different countries, as against case(i) where 2 indices are from the same country (US).

First, we derive the distribution of the test statistic ht=√t((1+ρt)−(1+ρT)) for the alternative hypothesis under consideration for cases (1-4) mentioned below, where the correlation changes once at time t1.

So, the correlation matrices for duration t1 and t2 can be written as

Therefore, the correlation matrix at time t1+t2 can be written as

When the correlation changes only once at t1, the form of our test statistic at t1 is

Where, Ns is standard normal distribution

We can derive a similar expression for the case (v) where the correlation changes at two times, t1 and t1+t2, in the total duration (t1+t2+t3) under consideration.

The test statistic at t1 is

We checked the power of our test for the conditions (i-v), in which variances constantly remain 1 and correlations change, and compared our results against that of [Wied et al., 2012] and [Aue et al., 2009].

In this paper, we have proposed a new fluctuation test for constant correlation matrix under a multivariate setting in which the change points need not be specified apriori. Our approach is more simplified because it allows us to work with more standard operations like eigendecomposition and normal distributions against the pairwise comparison and Brownian bridges of [Wied et al., 2012] and [Wied, 2017]. Since we are dealing with only the largest eigenvalue, the power of our test is less compared to the pairwise comparison of the entire correlation matrix of [Wied et al., 2012] and [Wied, 2017]. Nevertheless, our test is simpler for practical application and is effectively able detect changes in correlation matrix, as indicated in Section 3. Moreover, our method can be generalized to detect any changes in covariance matrix structure, as a complementary technique to [Aue et al., 2009]. One drawback of our test, which is also shared by [Wied et al., 2012] and [Wied, 2017], is the assumption of finite fourth moments and constant expectations and variances. Another drawback, which is shared by most of correlation based tests, is the low power when there are multiple change points in the duration under consideration, as illustrated in [Cabrieto et al., 2018]. Hence, it may be worthwhile to consider techniques like prefiltering and/or other transformations to overcome these drawbacks.