We present a simple proof for the universality of invariant and equivariant tensorized graph neural networks. Our approach considers a restricted intermediate hypothetical model named Graph Homomorphism Model to reach the universality conclusions including an open case for higher-order output. We find that our proposed technique not only leads to simple proofs of the universality properties but also gives a natural explanation for the tensorization of the previously studied models. Finally, we give some remarks on the connection between our model and the continuous representation of graphs. 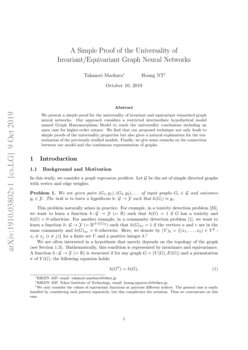 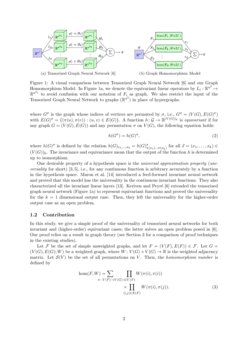 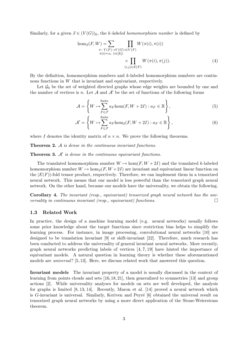 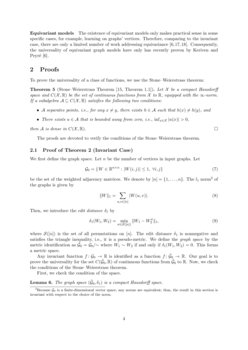 In this study, we consider a graph regression problem. Let G be the set of simple directed graphs with vertex and edge weights.

This problem naturally arises in practice. For example, in a toxicity detection problem [23], we want to learn a function h:G→Y (=R) such that h(G)=1 if G has a toxicity and h(G)=0 otherwise. For another example, in a community detection problem [1], we want to learn a function h:G→Y (=R(V(G))2) such that h(G)uv=1 if the vertices u and v are in the same community and h(G)uv=0 otherwise. Here, we denote by (V)k={(x1,…,xk)∈Vk:xi≠xj (i≠j)} for a finite set V and a positive integer k.333We only consider the values of equivariant functions at pairwise different indices. The general case is easily handled by considering each pattern separately, but this complicates the notation. Thus we concentrate on this case.

We are often interested in a hypothesis that merely depends on the topology of the graph (see Section 1.3). Mathematically, this condition is represented by invariance and equivariance. A function h:G→Y (=R) is invariant if for any graph G=(V(G),E(G)) and a permutation σ of V(G), the following equation holds:

In this study, we give a simple proof of the universality of tensorized neural networks for both invariant and (higher-order) equivariant cases; the latter solves an open problem posed in [6]. Our proof relies on a result in graph theory (see Section 3 for a comparison of proof techniques in the existing studies).

Let F be the set of simple unweighted graphs, and let F=(V(F),E(F))∈F. Let G=(V(G),E(G);W) be a weighted graph, where W:V(G)×V(G)→R is the weighted adjacency matrix. Let S(V) be the set of all permutations on V. Then, the homomorphism number is defined by

Similarly, for a given →x∈(V(G))k, the k-labeled homomorphism number is defined by

Let G0 be the set of weighted directed graphs whose edge weights are bounded by one and the number of vertices is n. Let A and A′ be the set of functions of the following forms

denotes the identity matrix of

n×n. We prove the following theorems.

A is dense in the continuous invariant functions.

A′ is dense in the continuous equivariant functions.

The translated homomorphism number W↦hom(F,W+2I) and the translated k-labeled homomorphism number W↦hom→x(F,W+2I) are invariant and equivariant linear function on the |E(F)|-fold tensor product, respectively. Therefore, we can implement them in a tensorized neural network. This means that our model is less powerful than the tensorized graph neural network. On the other hand, because our models have the universality, we obtain the following.

In practice, the design of a machine learning model (e.g. neural networks) usually follows some prior knowledge about the target functions since restriction bias helps to simplify the learning process. For instance, in image processing, convolutional neural networks

[10] are designed to be translation invariant [9] or shift-invariant [22]. Therefore, much research has been conducted to address the universality of general invariant neural networks. More recently, graph neural networks predicting labels of vertices [4, 7, 19] have hinted the importance of equivariant models. A natural question in learning theory is whether these aforementioned models are universal? [5, 13]. Here, we discuss related work that answered this question.

The invariant property of a model is usually discussed in the context of learning from points clouds and sets [16, 21, 18], then generalized to symmetries [13] and group actions [2]. While universality analyses for models on sets are well developed, the analysis for graphs is limited [13, 14, 8]. Recently, Maron et al. [14] proved a neural network which is G-invariant is universal. Similarly, Keriven and Peyré [6] obtained the universal result on tensorized graph neural networks by using a more direct application of the Stone-Weierstrass theorem.

The existence of equivariant models only makes practical sense in some specific cases, for example, learning on graphs’ vertices. Therefore, comparing to the invariant case, there are only a limited number of work addressing equivariance [17, 6, 18]. Consequently, the universality of equivariant graph models have only has recently proven by Keriven and Peyré [6].

To prove the universality of a class of functions, we use the Stone–Weierstrass theorem:

Let X be a compact Hausdorff space and C(X,R) be the set of continuous functions from X to R, equipped with the ∞-norm. If a subalgebra A⊆C(X,R) satisfies the following two conditions:

The proofs are devoted to verify the conditions of the Stone–Weierstrass theorem.

We first define the graph space. Let n be the number of vertices in input graphs. Let

is a finite-dimensional vector space, any norms are equivalent; thus, the result in this section is invariant with respect to the choice of the norm.

of the graphs is given by

Then, we introduce the edit distance δ1 by

where S([n]) is the set of all permutations on [n]. The edit distance δ1 is nonnegative and satisfies the triangle inequality, i.e., it is a pseudo-metric. We define the graph space by the metric identification as ~G0=G0/∼ where W1∼W2 if and only if δ1(W1,W2)=0. This forms a metric space.

Any invariant function f:G0→R is identified as a function f:~G0→R. Our goal is to prove the universality for the set C(~G0,R) of continuous functions from ~G0 to R. Now, we check the conditions of the Stone–Weierstrass theorem.

First, we check the condition of the space.

The graph space (~G0,δ1) is a compact Hausdorff space.

Next, we check the conditions of A.

A forms an algebra.

where is the disjoint union of F1 and F2. ∎

A contains an element that is bounded away from zero.

Let ∘ be the singleton graph. Then, W↦hom(∘,W+2I)≥n is bounded away from zero. ∎

To prove the separate point property, we use the following theorem.

Let W1,W2∈Rn×n be matrices with positive diagonal elements. Then, W1 and W2 are isomorphic if and only if hom(F,W1)=hom(F,W2) for all simple unweighted graph F. ∎

A separates points in ~G0.

For a permutation σ∈S([n]), we define

Now we define the k-labeled edit distance δ′1 by

Any equivariant function f:G0→R([n])k is identified as a function f:~G′0→R. Our goal is to prove the universality for the set C(~G′0,R) of continuous functions from ~G′0 to R. Now, we check the condition of the Stone–Weierstrass theorem. This part is very similar to that of the invariant case.

First, we check the condition of the space.

It is Hausdorff because it is a metric space. We show the sequentially compactness. Let (W1,→x1),(W2,→x2),… be an arbitrary sequence in ~G′0, which is also identified as a sequence in G′0. Because the number of possibilities of →xi is finite, we can select an (infinite) subsequence that has the same value of →xi. The remaining part is the same as the proof of Lemma 6. ∎

Next, we check the conditions of A′.

A′ forms an algebra.

where F1∪′F2 is the graph obtained from the disjoint union of F1 and F2 by glueing the labeled vertices. ∎

A′ contains an element that is bounded away from zero.

Let ∘⋯∘ be the graph of k isolated vertices. Then, W↦hom→x(∘⋯∘,W+2I)≥n−k is bounded away from zero. ∎

To prove the separate point property, we use the following theorem.

It is proved similarly as Lemma 10 by using Theorem 14. ∎

3 Comparison with Other Proofs

One advantage of their method is that it is applicable to hypergraphs. Our method could be applicable for hypergraphs; however, there is a gap because the theory of weighted homomorphism number of hypergraphs is not well established (compared with graphs).

They only considered the invariant case. They used the universality of symmetric polynomials by Yarotsky [20]. Then, they approximated the polynomials by a tensorized neural network.

If we want to consider graphs of different numbers of vertices, it is promising to consider graphons [12]. Below we explain that all the results obtained in this paper can be extended to graphons.

An (asymmetric) graphon is a measurable function [0,1]2→[0,1]. This is a continuous generalization of the weighted adjacency matrix. The set of graphons is denoted by W0. The cut-norm ∥⋅∥□ is defined by

where σ runs over all measure-preserving bijections. The graphon space ~W0 is defined by the metric identification.

The graphon space contains infinitely many large graphs. However, it is still compact with respect to the cut distance. Note that this does not hold for the edit distance.

The graphon space (~W0,δ□) is compact.

The set of linear combination of the homomorphism densites also forms an unital algebra. To show the separate points property, we can use the following theorem.

Therefore, we obtain the following result.

The set of finite linear combinations of the homomorphism densities are dense in the continuous invariant graphon functions. ∎

Note that this fact is already proved in [12, Theorem 17.6] for a different context (for symmetric graphons).

The equivariant case is also handled by considering k-labeled graphons. The k-labeled homomorphism density is given by

Then, we obtain the following result.

The set of finite linear combinations of the k-labeled homomorphism densities are dense in the continuous equivariant graphon functions. ∎