A Simple Object that Spans the Whole Consensus Hierarchy

This paper presents a simple generalization of the basic atomic read/write register object, whose genericity parameter spans the whole set of integers and is such that its k-parameterized instance has exactly consensus number k. This object, whose definition is pretty natural, is a sliding window register of size k. Its interest lies in its simplicity and its genericity dimension which provides a global view capturing the whole consensus hierarchy. Hence, this short article must be seen as a simple pedagogical introduction to Herlihy's consensus hierarchy. 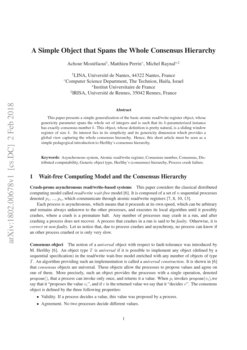 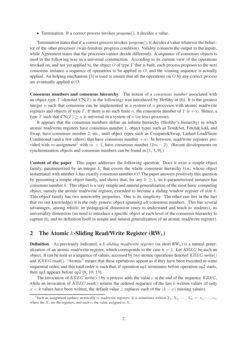 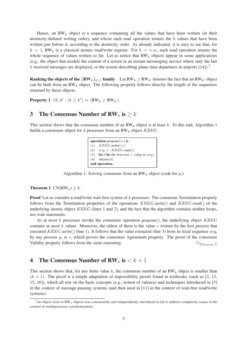 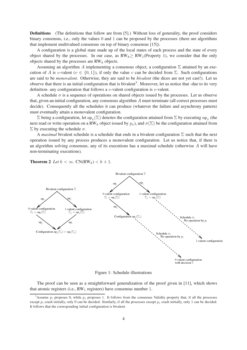 Each process is asynchronous, which means that it proceeds at its own speed, which can be arbitrary and remains always unknown to the other processes, and executes its local algorithm until it possibly crashes, where a crash is a premature halt. Any number of processes may crash in a run, and after crashing a process does not recover. A process that crashes in a run is said to be faulty. Otherwise, it is correct or non-faulty. Let us notice that, due to process crashes and asynchrony, no process can know if an other process crashed or is only very slow.

The notion of a universal object with respect to fault-tolerance was introduced by M. Herlihy [7]. An object type T is universal if it is possible to implement any object (defined by a sequential specification) in the read/write wait-free model enriched with any number of objects of type T. An algorithm providing such an implementation is called a universal construction. It is shown in [7] that consensus objects are universal. These objects allow the processes to propose values and agree on one of them. More precisely, such an object provides the processes with a single operation, denoted propose(), that a process can invoke only once, and returns it a value. When pi invokes propose(vi),we say that it “proposes the value vi”, and if v is the returned value we say that it “decides v”. The consensus object is defined by the three following properties:

Termination states that if a correct process invokes propose(), it decides a value whatever the behavior of the other processes (wait-freedom progress condition). Validity connects the output to the inputs, while Agreement states that the processes cannot decide differently. A sequence of consensus objects is used in the following way in a universal construction. According to its current view of the operations invoked on, and not yet applied to, the object O of type T that is built, each process proposes to the next consensus instance a sequence of operations to be applied to O, and the winning sequence is actually applied. An helping mechanism [4] is used to ensure that all the operations on O by any correct process are eventually applied to O.

The notion of a consensus number associated with an object type T (denoted CN(T) in the following) was introduced by Herlihy in [7]. It is the greatest integer n such that consensus can be implemented in a system of n processes with atomic read/write registers and objects of type T. If there is no such finite n, the consensus number of T is +∞. Hence, a type T such that CN(T)≥n is universal in a system of n (or less) processes.

This paper addresses the following question: Does it exist a simple object family, parameterized by an integer k, that covers the whole consensus hierarchy (i.e., whose object instantiated with number k has exactly consensus number k)? The paper answers positively this question by presenting a simple object family, and shows that, for any k≥1, its k-parameterized instance has consensus number k. This object is a very simple and natural generalization of the most basic computing object, namely the atomic read/write register, extended to become a sliding window register of size k. This object family has two noteworthy properties. One is its simplicity. The other one lies in the fact that (to our knowledge) it is the only generic object spanning all consensus numbers. This has several advantages, among which, its pedagogical dimension (easy to understand and teach to students), its universality dimension (no need to introduce a specific object at each level of the consensus hierarchy to capture it), and its definition itself (a simple and natural generalization of an atomic read/write register).

As previously indicated, a k-sliding read/write register (in short RWk) is a natural generalization of an atomic read/write register, which corresponds to the case k=1. Let KREG be such an object. It can be seen as a sequence of values, accessed by two atomic operations denoted KREG.write() and KREG.read(). “Atomic” means that these operations appear as if they have been executed in some sequential order, and this total order is such that, if operation op1 terminates before operation op2 starts, then op1 appears before op2 [9, 11, 14].

The invocation of KREG.write(v) by a process adds the value v at the end of the sequence KREG, while an invocation of KREG.read() returns the ordered sequence of the last k written values (if only x<k values have been written, the default value ⊥ replaces each of the (k−x) missing values).

Hence, an RWk object is a sequence containing all the values that have been written (in their atomicity-defined writing order), and whose each read operation returns the k values that have been written just before it, according to the atomicity order. As already indicated, it is easy to see that, for k=1, RWk is a classical atomic read/write register. For k=+∞, each read operation returns the whole sequence of values written so far. Let us notice that RWk objects appear in some applications (e.g., the object that models the content of a screen in an instant messenging service where only the last k received messages are displayed, or the screen describing plane time departures in airports [15]).222An object close to RWk objects was concurrently and independently introduced in [5] to address complexity issues in the context of multiprocessor synchronization.

Ranking the objects of the {Rwk}k≥1 family

Let RWk ≥ RWk′ denotes the fact that an RWk′ object can be built from an RWk object. The following property follows directly the length of the sequences returned by these objects.

3 The Consensus Number of RWk is ≥k

Proof Let us consider a read/write wait-free system of k processes. The consensus Termination property follows from the Termination properties of the operations KREG.write() and KREG.read() of the underlying atomic object KREG (lines 1 and 1), and the fact that the algorithm contains neither loops, nor wait statements.

As at most k processes invoke the consensus operation propose(), the underlying object KREG contains at most k values. Moreover, the oldest of them is the value v written by the first process that executed KREG.write() (line 1). It follows that the value extracted (line 1) from its local sequence seqi by any process pi is v, which proves the consensus Agreement property. The proof of the consensus Validity property follows from the same reasoning. □Theorem ???

4 The Consensus Number of RWk is <k+1

This section shows that, for any finite value k, the consensus number of an RWk object is smaller than (k+1). The proof is a simple adaptation of impossibility proofs found in textbooks (such as [3, 13, 16, 17]), which all rest on the basic concepts (e.g., notion of valence) and techniques introduced in [6] in the context of message-passing systems (and then used in [12] in the context of wait-free read/write systems).

(The definitions that follow are from [6].) Without loss of generality, the proof considers binary consensus, i.e., only the values 0 and 1 can be proposed by the processes (there are algorithms that implement multivalued consensus on top of binary consensus [16]).

A schedule σ is a sequence of operations on shared objects issued by the processes. Let us observe that, given an initial configuration, any consensus algorithm A must terminate (all correct processes must decide). Consequently all the schedules it can produce (whatever the failure and asynchrony pattern) must eventually attain a monovalent configuration.

A maximal bivalent schedule is a schedule that ends in a bivalent configuration Σ such that the next operation issued by any process produces a monovalent configuration. Let us notice that, if there is an algorithm solving consensus, any of its executions has a maximal schedule (otherwise A will have non-terminating executions).

The proof can be seen as a straightforward generalization of the proof given in [12], which shows that atomic registers (i.e., RW1 registers) have consensus number 1.

Proof As in [6], starting with an algorithm A assumed to implement consensus, and an initial bivalent configuration, the proof consists in building an execution of A in which there is no maximal schedule. Consequently, all its configurations are bivalent, from which follows that the schedule is infinite: A does not satisfy the consensus Termination property.

This paper first introduced a new type of concurrent object, parameterized by an integer k, namely an atomic read/write sequence which can be accessed by a read and a write operation. Each write adds a new value at the end of the sequence, while a read returns the last k written values. This generic object, called k-sliding read/write register, has an instance for each integer k. The instance k=1 corresponds to the classical atomic read/write register, which is the most basic object of computing. Then, the paper has shown that the consensus number of such a k-parameterized object is k. Hence, this object family covers the whole spectrum of Herlihy’s consensus hierarchy, a noteworthy pedagogical property. From a technical point of view, this result may help better understand the synchronization power of concurrent objects. Moreover, it is sufficient to show that an object can be implemented with a k-sliding read/write register to prove its consensus number is at most k.

This work has been partially supported by the French ANR project DESCARTES devoted to layered and modular structures in distributed computing.