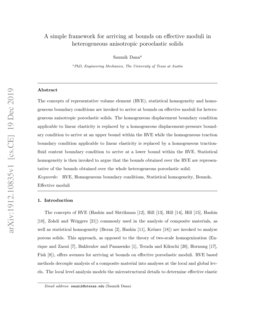 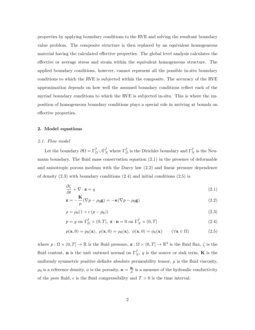 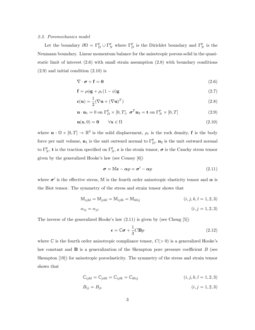 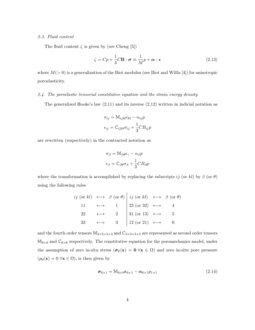 The concepts of RVE (Hashin and Shtrikman (1962), Hill (1963), Hill (1965), Hill (1972), Hashin (1983), Zohdi and Wriggers (2005)) commonly used in the analysis of composite materials, as well as statistical homogeneity (Beran (1968), Hashin (CR-1974), Kröner (1974)) are invoked to analyse porous solids. This approach, as opposed to the theory of two-scale homogenization (Enrique and Zaoui (1987), Bakhvalov and Panasenko (1989), Terada and Kikuchi (2001), Hornung (2012), Fish (2014)), offers avenues for arriving at bounds on effective poroelastic moduli. RVE based methods decouple analysis of a composite material into analyses at the local and global levels. The local level analysis models the microstructural details to determine effective elastic properties by applying boundary conditions to the RVE and solving the resultant boundary value problem. The composite structure is then replaced by an equivalent homogeneous material having the calculated effective properties. The global level analysis calculates the effective or average stress and strain within the equivalent homogeneous structure. The applied boundary conditions, however, cannot represent all the possible in-situ boundary conditions to which the RVE is subjected within the composite. The accuracy of the RVE approximation depends on how well the assumed boundary conditions reflect each of the myriad boundary conditions to which the RVE is subjected in-situ. This is where the imposition of homogeneous boundary conditions plays a special role in arriving at bounds on effective properties.

Let the boundary ∂Ω=ΓfD∪ΓfN where ΓfD is the Dirichlet boundary and ΓfN is the Neumann boundary. The fluid mass conservation equation (2.1) in the presence of deformable and anisotropic porous medium with the Darcy law (2.2) and linear pressure dependence of density (2.3) with boundary conditions (2.4) and initial conditions (2.5) is

μ is the fluid viscosity, ρ0 is a reference density, ϕ is the porosity, κ=Kμ is a measure of the hydraulic conductivity of the pore fluid, c is the fluid compressibility and T>0 is the time interval.

Let the boundary ∂Ω=ΓpD∪ΓpN where ΓpD is the Dirichlet boundary and ΓpN is the Neumann boundary. Linear momentum balance for the anisotropic porous solid in the quasi-static limit of interest (2.6) with small strain assumption (2.8) with boundary conditions (2.9) and initial condition (2.10) is

where σ′ is the effective stress, M is the fourth order anisotropic elasticity tensor and α is the Biot tensor. The symmetry of the stress and strain tensor shows that

where C is the fourth order anisotropic compliance tensor, C(>0) is a generalized Hooke’s law constant and B is a generalization of the Skempton pore pressure coefficient B (see Skempton (1954)) for anisotropic poroelasticity. The symmetry of the stress and strain tensor shows that

where M(>0) is a generalization of the Biot modulus (see Biot and Willis (1957)) for anisotropic poroelasticity.

2.4 The poroelastic tensorial constitutive equation and the strain energy density

The generalized Hooke’s law (2.11) and its inverse (2.12) written in indicial notation as

are rewritten (respectively) in the contracted notation as

and the fourth order tensors M3×3×3×3 and C3×3×3×3 are represented as second order tensors M6×6 and C6×6 respectively. The constitutive equation for the poromechanics model, under the assumption of zero in-situ stress (σ0(x)=0∀x∈Ω) and zero in-situ pore pressure (p0(x)=0∀x∈Ω), is then given by

On the other hand, the constitutive equation for the flow model, under the assumption of zero in-situ stress (σ0(x)=0∀x∈Ω) and zero in-situ pore pressure (p0(x)=0∀x∈Ω), is then given by

where υ≡(u,p) is the poroelastic field. In lieu of (2.16) and (2.17), the strain energy density of porous elastic medium is given as

4 Procedural framework to arrive at bounds on effective poroelastic moduli

In lieu of (4.2), the poroelastic boundary field (u,p) can be decomposed as

where k is summed. The γ field at any point is then given by

where A(x) are the space dependent poroelastic moduli of the heterogeneous body and k is summed. Let (4.6) be volume averaged over a RVE. The result is written in the form

where the upper bound on effective poroelastic moduli is obtained as

In lieu of (4.8), the poroelastic boundary field (t,ζ) can be decomposed as

where k is summed. The κ field at any point is then given by

where A(x) are the space dependent poroelastic moduli of the heterogeneous body and k is summed. Let (4.12) be volume averaged over a RVE. The result is written in the form

where the effective poroelastic compliance is obtained as

As shown in Figure 1, consider a two phase body with phases occupying regions R1 and R2 with displacement fields u(1)i(x) and u(2)i(x) respectively. The volume of the two phase body is V, the phase volumes are V1 and V2, the bounding surface is S and the interface is S12.

a.1 Expression for average strain

The strains ϵij are defined as

which, in lieu of the divergence theorem, can be written as

where S1 and S2 are the bounding surfaces of R1 and R2. Now each of S1 and S2 are composed of part of the external surface S and the interface S12. Therefore, (A.3) may be rewritten as

where the interface integral terms in (A.4) cancel out as ni (and nj) is always the outward normal.

a.2 Expression for average stress

Let the stress field inside the body be σij(x) and the body force per unit volume be fi(x). The body is assumed to be in quasi-static equilibrium, so that at every point,

On the external surface S, the tractions ti(S)=σijnj are prescribed. The average stress is defined by

We substitute the following

Consider a collection of N fibrous cylindrical specimens, each of which is refered to a system of axes, the origin of which is at the same point in each specimen. The specimens have the same external geometry, however, their phase geometries, i.e. internal geometries may be quite different. In the theory of random processes, such a collection of specimens is called an ensemble and each specimen is a member of the ensemble. We consider the two points B1, B2 in each specimen member of the ensemble, which have the same position vectors x1 and x2

in each specimen. The probability that

where each of the subscripts i1, i2, …, in assumes either one of the phase numbers 1, 2 and its position in the subscript sequence is attached to that corresponding to the position vector within the parenthesis. We now finally proceed to define the concept of statistical homogeneity. For this purpose, the system of n points entering into (B.1) may be considered as a rigid body which is described by the vector differences

Suppose that any multipoint probability such as (B.1) depends only on the relative configuration of the points and not on their absolute position with respect to the coordinate system; then the ensemble is called statistically homogeneous. Mathematically this means