Margin infused relaxed algorithms (MIRAs) dominate model tuning in statistical machine translation in the case of large scale features, but also they are famous for the complexity in implementation. We introduce a new method, which regards an N-best list as a permutation and minimizes the Plackett-Luce loss of ground-truth permutations. Experiments with large-scale features demonstrate that, the new method is more robust than MERT; though it is only matchable with MIRAs, it has a comparatively advantage, easier to implement. 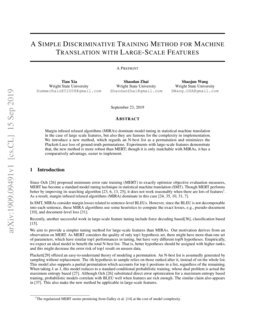 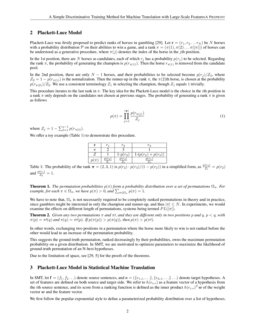 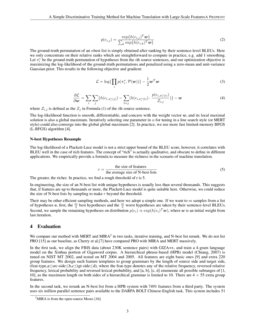 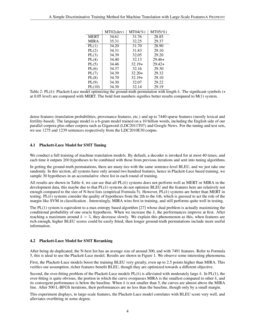 The manuscript presents an experiment at implementation of a Machine Tra...
Jernej Vičič, et al. ∙

In SMT, MIRAs consider margin losses related to sentence-level BLEUs. However, since the BLEU is not decomposable into each sentence, these MIRA algorithms use some heuristics to compute the exact losses, e.g., pseudo-document

We aim to provide a simpler tuning method for large-scale features than MIRAs. Out motivation derives from an observation on MERT. As MERT considers the quality of only top1 hypothesis set, there might have more-than-one set of parameters, which have similar top1 performances in tuning, but have very different topN hypotheses. Empirically, we expect an ideal model to benefit the total N-best list. That is, better hypotheses should be assigned with higher ranks, and this might decrease the error risk of top1 result on unseen data.

Plackett[plackett1975analysis] offered an easy-to-understand theory of modeling a permutation. An N-best list is assumedly generated by sampling without replacement. The ith hypothesis to sample relies on those ranked after it, instead of on the whole list. This model also supports a partial permutation which accounts for top k positions in a list, regardless of the remaining. When taking k as 1, this model reduces to a standard conditional probabilistic training, whose dual problem is actual the maximum entropy based [och2002discriminative]. Although Och [och2003minimum] substituted direct error optimization for a maximum entropy based training, probabilistic models correlate with BLEU well when features are rich enough. The similar claim also appears in [zhu2001kernel]. This also make the new method be applicable in large-scale features.

Plackett-Luce was firstly proposed to predict ranks of horses in gambling [plackett1975analysis]. Let r=(r1,r2…rN) be N

horses with a probability distribution

In the 1st position, there are N horses as candidates, each of which rj has a probability p(rj) to be selected. Regarding the rank π, the probability of generating the champion is p(rπ(1)). Then the horse rπ(1) is removed from the candidate pool.

In the 2nd position, there are only N−1 horses, and their probabilities to be selected become p(rj)/Z2, where Z2=1−p(rπ(1)) is the normalization. Then the runner-up in the rank π, the π(2)th horse, is chosen at the probability p(rπ(2))/Z2. We use a consistent terminology Z1 in selecting the champion, though Z1 equals 1 trivially.

This procedure iterates to the last rank in π. The key idea for the Plackett-Luce model is the choice in the ith position in a rank π only depends on the candidates not chosen at previous stages. The probability of generating a rank π is given as follows

We offer a toy example (Table 1) to demonstrate this procedure.

We have to note that, Ωπ is not necessarily required to be completely ranked permutations in theory and in practice, since gamblers might be interested in only the champion and runner-up, and thus |π|≤N. In experiments, we would examine the effects on different length of permutations, systems being termed PL(|π|).

In other words, exchanging two positions in a permutation where the horse more likely to win is not ranked before the other would lead to an increase of the permutation probability.

Due to the limitation of space, see [plackett1975analysis, cao2007learning] for the proofs of the theorems.

as a feature vector of a hypothesis from the

ith source sentence, and its score from a ranking function is defined as the inner product h(ei,∗)Tw of the weight vector w and the feature vector.

We first follow the popular exponential style to define a parameterized probability distribution over a list of hypotheses.

th source sentences, and our optimization objective is maximizing the log-likelihood of the ground-truth permutations and penalized using a zero-mean and unit-variance Gaussian prior. This results in the following objective and gradient:

where Zi,j is defined as the Zj in Formula (1) of the ith source sentence.

The log-likelihood function is smooth, differentiable, and concave with the weight vector w, and its local maximal solution is also a global maximum. Iteratively selecting one parameter in α for tuning in a line search style (or MERT style) could also converge into the global global maximum [bertsekas1999nonlinear]. In practice, we use more fast limited-memory BFGS (L-BFGS) algorithm [byrd1995limited].

The log-likelihood of a Plackett-Luce model is not a strict upper bound of the BLEU score, however, it correlates with BLEU well in the case of rich features. The concept of “rich” is actually qualitative, and obscure to define in different applications. We empirically provide a formula to measure the richness in the scenario of machine translation.

The greater, the richer. In practice, we find a rough threshold of r is 5.

In engineering, the size of an N-best list with unique hypotheses is usually less than several thousands. This suggests that, if features are up to thousands or more, the Plackett-Luce model is quite suitable here. Otherwise, we could reduce the size of N-best lists by sampling to make r beyond the threshold.

Their may be other efficient sampling methods, and here we adopt a simple one. If we want to m samples from a list of hypotheses e, first, the m3 best hypotheses and the m3 worst hypotheses are taken by their sentence-level BLEUs. Second, we sample the remaining hypotheses on distribution p(ei)∝exp(h(ei)Tw), where w is an initial weight from last iteration.

We compare our method with MERT and MIRA222MIRA is from the open-source Moses [koehn2007moses] in two tasks, iterative training, and N-best list rerank. We do not list PRO [hopkins2011tuning] as our baseline, as Cherry et al.[cherry2012batch] have compared PRO with MIRA and MERT massively.

In the first task, we align the FBIS data (about 230K sentence pairs) with GIZA++, and train a 4-gram language model on the Xinhua portion of Gigaword corpus. A hierarchical phrase-based (HPB) model (Chiang, 2007) is tuned on NIST MT 2002, and tested on MT 2004 and 2005. All features are eight basic ones [chiang2007hierarchical] and extra 220 group features. We design such feature templates to group grammars by the length of source side and target side, (feat-type,a≤src-side≤b,c≤tgt-side≤d), where the feat-type denotes any of the relative frequency, reversed relative frequency, lexical probability and reversed lexical probability, and [a, b], [c, d] enumerate all possible subranges of [1, 10], as the maximum length on both sides of a hierarchical grammar is limited to 10. There are 4 × 55 extra group features.

In the second task, we rerank an N-best list from a HPB system with 7491 features from a third party. The system uses six million parallel sentence pairs available to the DARPA BOLT Chinese-English task. This system includes 51 dense features (translation probabilities, provenance features, etc.) and up to 7440 sparse features (mostly lexical and fertility-based). The language model is a 6-gram model trained on a 10 billion words, including the English side of our parallel corpora plus other corpora such as Gigaword (LDC2011T07) and Google News. For the tuning and test sets, we use 1275 and 1239 sentences respectively from the LDC2010E30 corpus.

We conduct a full training of machine translation models. By default, a decoder is invoked for at most 40 times, and each time it outputs 200 hypotheses to be combined with those from previous iterations and sent into tuning algorithms.

In getting the ground-truth permutations, there are many ties with the same sentence-level BLEU, and we just take one randomly. In this section, all systems have only around two hundred features, hence in Plackett-Luce based training, we sample 30 hypotheses in an accumulative nbest list in each round of training.

All results are shown in Table 2, we can see that all PL(k) systems does not perform well as MERT or MIRA in the development data, this maybe due to that PL(k) systems do not optimize BLEU and the features here are relatively not enough compared to the size of N-best lists (empirical Formula 5). However, PL(k) systems are better than MERT in testing. PL(k) systems consider the quality of hypotheses from the 2th to the kth, which is guessed to act the role of the margin like SVM in classification . Interestingly, MIRA wins first in training, and still performs quite well in testing.

The PL(1) system is equivalent to a max-entropy based algorithm [och2002discriminative] whose dual problem is actually maximizing the conditional probability of one oracle hypothesis. When we increase the k, the performances improve at first. After reaching a maximum around k=5, they decrease slowly. We explain this phenomenon as this, when features are rich enough, higher BLEU scores could be easily fitted, then longer ground-truth permutations include more useful information.

After being de-duplicated, the N-best list has an average size of around 300, and with 7491 features. Refer to Formula 5, this is ideal to use the Plackett-Luce model. Results are shown in Figure 1. We observe some interesting phenomena.

First, the Plackett-Luce models boost the training BLEU very greatly, even up to 2.5 points higher than MIRA. This verifies our assumption, richer features benefit BLEU, though they are optimized towards a different objective.

Second, the over-fitting problem of the Plackett-Luce models PL(k) is alleviated with moderately large k. In PL(1), the over-fitting is quite obvious, the portion in which the curve overpasses MIRA is the smallest compared to other k, and its convergent performance is below the baseline. When k is not smaller than 5, the curves are almost above the MIRA line. After 500 L-BFGS iterations, their performances are no less than the baseline, though only by a small margin.

This experiment displays, in large-scale features, the Plackett-Luce model correlates with BLEU score very well, and alleviates overfitting in some degree.