I reproduce a rather simple formal derivation of the Heaps' law from the generalized Zipf's law, which I previously published in Russian. 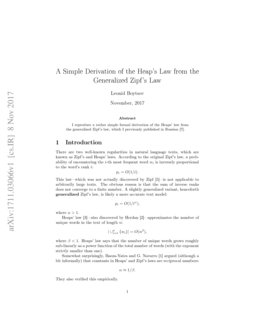 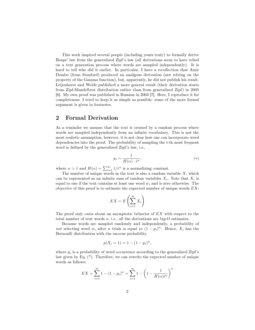 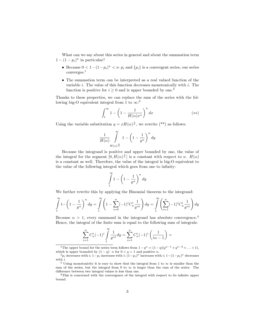 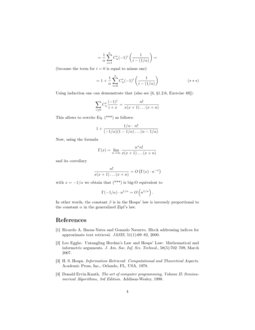 There are two well-known regularities in natural language texts, which are known as Zipf’s and Heaps’ laws. According to the original Zipf’s law, a probability of encountering the

i-th most frequent word wi is inversely proportional to the word’s rank i:

This law—which was not actually discovered by Zipf [5]—is not applicable to arbitrarily large texts. The obvious reason is that the sum of inverse ranks does not converge to a finite number. A slightly generalized variant, henceforth generalized Zipf’s law, is likely a more accurate text model:

Heaps’ law [3]—also discovered by Herdan [2]—approximates the number of unique words in the text of length n:

where β<1. Heaps’ law says that the number of unique words grows roughly sub-linearly as a power function of the total number of words (with the exponent strictly smaller than one).

Somewhat surprisingly, Baeza-Yates and G. Navarro [1] argued (although a bit informally) that constants in Heaps’ and Zipf’s laws are reciprocal numbers:

They also verified this empirically.

This work inspired several people (including yours truly) to formally derive Heaps’ law from the generalized Zipf’s law (all derivations seem to have relied on a text generation process where words are sampled independently). It is hard to tell who did it earlier. In particular, I have a recollection that Amir Dembo (from Stanford) produced an analgous derivation (not relying on the property of the Gamma function), but, apparently, he did not publish his result. Leijenhorst and Weide published a more general result (their derivation starts from Zipf-Mandelbrot distribution rather than from generalized Zipf) in 2005

[6]. My own proof was published in Russian in 2003 [7]. Here, I reproduce it for completeness. I tried to keep it as simple as possible: some of the more formal argument is given in footnotes.

As a reminder we assume that the text is created by a random process where words are sampled independently from an infinite vocabulary. This is not the most realistic assumption, however, it is not clear how one can incorporate word dependencies into the proof. The probability of sampling the i-th most frequent word is defined by the generalized Zipf’s law, i.e.,

X, which can be represented as an infinite sum of random variables Xi. Note that Xi is equal to one if the text contains at least one word wi

and is zero otherwise. The objective of this proof is to estimate the expected number of unique words

The proof only cares about an asymptotic behavior of EX with respect to the total number of text words n, i.e., all the derivations are big-O estimates.

Because words are sampled randomly and independently, a probability of not selecting word wi after n trials is equal to (1−pi)n. Hence, Xi

has the Bernoulli distribution with the success probability

where pi is a probability of word occurrence according to the generalized Zipf’s law given by Eq. (*). Therefore, we can rewrite the expected number of unique words as follows:

What can we say about this series in general and about the summation term 1−(1−pi)n in particular?

Using the variable substitution y=xH(α)1α, we rewrite (**) as follows:

We further rewrite this by applying the Binomial theorem to the integrand:

Because α>1, every summand in the integrand has absolute convergence.444This is concerned with the convergence of the integral with respect to its infinite upper bound. Hence, the integral of the finite sum is equal to the following sum of integrals:

(because the term for i=0 is equal to minus one)

In other words, the constant β is in the Heaps’ law is inversely proportional to the constant α in the generalized Zipf’s law.