We consider the linear regression problem, where the goal is to recover the vector x∈R^n from measurements y=Ax+w∈R^m under known matrix A and unknown noise w. For large i.i.d. sub-Gaussian A, the approximate message passing (AMP) algorithm is precisely analyzable through a state-evolution (SE) formalism, which furthermore shows that AMP is Bayes optimal in certain regimes. The rigorous SE proof, however, is long and complicated. And, although the AMP algorithm can be derived as an approximation of loop belief propagation (LBP), this viewpoint provides little insight into why large i.i.d. A matrices are important for AMP. In this work, we provide a heuristic derivation of AMP and its state evolution, based on the idea of "first-order cancellation," that provides insights missing from the LBP derivation while being much shorter than the rigorous SE proof. 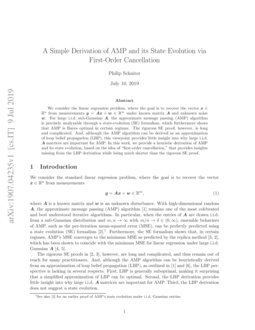 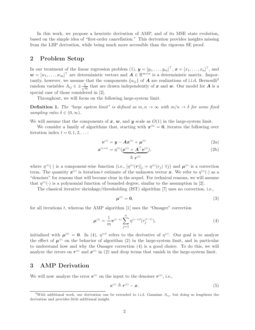 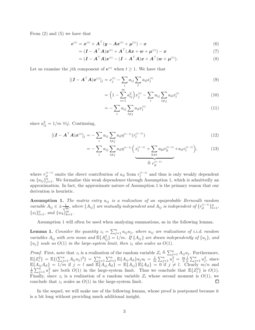 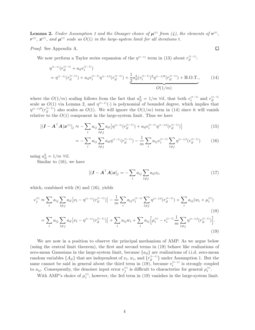 A common goal in many research areas is to reconstruct an unknown signal...
Hangjin Liu, et al. ∙

We consider the standard linear regression problem, where the goal is to recover the vector x∈Rn from measurements

where A is a known matrix and w is an unknown disturbance. With high-dimensional random A, the approximate message passing (AMP) algorithm [1] remains one of the most celebrated and best understood iterative algorithms. In particular, when the entries of A

are drawn i.i.d. from a sub-Gaussian distribution and

m,n→∞ with m/n→δ∈(0,∞), ensemble behaviors of AMP, such as the per-iteration mean-squared error (MSE), can be perfectly predicted using a state evolution (SE) formalism [2].111See also [3] for an earlier proof of AMP’s state evolution under i.i.d. Gaussian entries. Furthermore, the SE formalism shows that, in certain regimes, AMP’s MSE converges to the minimum MSE as predicted by the replica method [3, 2], which has been shown to coincide with the minimum MSE for linear regression under i.i.d. Gaussian A [4, 5] as m,n→∞ with m/n→δ∈(0,∞). More recently, it has been proven that the state-evolution accurately characterizes AMP’s behavior for large but finite m,n [6].

The rigorous SE proofs in [2, 3, 6], however, are long and complicated, and thus remain out of reach for many readers. And, although the AMP algorithm can be heuristically derived from an approximation of loop belief propagation (LBP), as outlined in [1] and [7], the LBP perspective is lacking in several respects. First, LBP is generally suboptimal, making it surprising that a simplified approximation of LBP can be optimal. Second, the LBP derivation provides little insight into why large i.i.d. A matrices are important for AMP. Third, the LBP derivation does not suggest a scalar state evolution.

In this work, we propose a heuristic derivation of AMP and its MSE state evolution that uses the simple idea of “first-order cancellation.” This derivation provides insights missing from the LBP derivation, while being much more accessible than the rigorous SE proofs.

In our treatment of the linear regression problem (1), y=[y1,…,ym]⊤, x=[x1,…,xn]⊤, and w=[w1,…,wm]⊤ are deterministic vectors and A∈Rm×n is a deterministic matrix. Importantly, however, we assume that the components {aij} of A are realizations of i.i.d. Bernoulli222With additional work, our derivation can be extended to i.i.d. Gaussian Aij, but doing so lengthens the derivation and provides little additional insight.random variables Aij∈±1√m that are drawn independently of x and w. Our model for A is a special case of that considered in [2].

Throughout, we will focus on the following large-system limit.

We will assume that the components of x, w, and y scale as O(1) in the large-system limit.

We consider a family of algorithms that, starting with x(0)=0, iterates the following over iteration index t=0,1,2,…:

where η(t)(⋅) is a component-wise function (i.e., [η(t)(r)]j=η(t)(rj) ∀j) and μ(t) is a correction term. The quantity x(t) is iteration-testimate of the unknown vector x. We refer to η(t)(⋅) as a “denoiser” for reasons that will become clear in the sequel. For technical reasons, we will assume that η(t)(⋅) is a polynomial function of bounded degree, similar to the assumption in [2].

for all iterations t, whereas the AMP algorithm [1] uses the “Onsager” correction

initialized with μ(0)=0. In (4), η(t)′ refers to the derivative of η(t). Our goal is to analyze the effect of μ(t) on the behavior of algorithm (2) in the large-system limit, and in particular to understand how and why the Onsager correction (4) is a good choice. To do this, we will analyze the errors on r(t) and x(t) in (2) and drop terms that vanish in the large-system limit.

We will now analyze the error e(t) on the input to the denoiser r(t), i.e.,

Let us examine the jth component of e(t) when t≥1. We have that

where r(t−1)il omits the direct contribution of ail from r(t−1)l and thus is only weakly dependent on {aij}nj=1. We formalize this weak dependence through Assumption 1, which is admittedly an approximation. In fact, the approximate nature of Assumption 1 is one of the main reasons that our derivation is heuristic.

The matrix entry aij is a realization of an equiprobable Bernoulli random variable Aij∈±1√m, where {Aij} are mutually independent and Aij is independent of {r(t−1)il}nl=1, {xl}nl=1, and {wk}mk=1.

Assumption 1 will often be used when analyzing summations, as in the following lemma.

Consider the quantity zi=∑nj=1aijuj, where aij are realizations of i.i.d. random variables Aij with zero mean and E[A2ij]=1/m. If {Aij} are drawn independently of {uj}, and {uj} scale as O(1) in the large-system limit, then zi also scales as O(1).

whose second moment is

In the sequel, we will make use of the following lemma, whose proof is postponed because it is a bit long and does not provide much insight.

We are now in a position to observe the principal mechanism of AMP. As we argue below (using the central limit theorem), the first and second terms in (

19) behave like realizations of zero-mean Gaussians in the large-system limit, because {ail} are realizations of i.i.d. zero-mean random variables {Ail} that are independent of xl, wi, and {r(t−1)il} under Assumption 1. But the same cannot be said in general about the third term in (19), because v(t−1)i is strongly coupled to aij. Consequently, the denoiser input-error e(t)j is difficult to characterize for general μ(t)i.

where for the last step we used the Taylor-series expansion

Thus, for large m and the AMP choice of μ(t)i, equation (19) becomes

Under Assumption 1, ail is a realization of equiprobable Ail∈±1√m that is independent of {xl}Nl=1, r(t−1)il, and {Aij}j≠l. Thus we can apply the central limit theorem to say that, for any fixed {ϵ(t)il}

, the first term converges to a Gaussian with mean and variance

From the Taylor expansion (14), we have

where τw denotes the empirical second moment of the noise:

To summarize, with AMP’s choice of μ(t) from (4), the jth component of the denoiser input-error behaves like

in the large-system limit, where N(μ,σ2) denotes a Gaussian random variable with mean μ and variance σ2. With other choices of μ(t) (e.g., ISTA’s choice of μ(t)=0 ∀t), it is difficult to characterize the denoiser input-error e(t) and in general it will not be Gaussian.

In Section 3, we used Assumption 1 to argue that the AMP algorithm yields a denoiser input-error e(t) whose components are N(0,τ(t)r) in the large system limit. Here, τ(t)r=δ−1E(t)+τw where E(t) is the average squared-error at the denoiser output in the large-system limit.

Recalling the definition of E(t) from (32), we can write

with δ(⋅) denoting the Dirac delta function. Thus we can argue that, in the large-system limit,

where X now is distributed according to the n→∞ limit of the empirical distribution. Combining (40) with the update equation for τ(t)r gives the following recursion for t=0,1,2,…:

The reason that we call η(t)(⋅) a “denoiser” should now be clear. To minimize the mean-squared error E(t+1), the function η(t)(⋅) should remove as much of the noise from its input as possible. The smaller that E(t+1) is, the smaller the input-noise variance τ(t+1)r will be during the next iteration.

For best performance, the iteration-t denoiser η(t)(⋅) should be designed in accordance with the iteration-t input noise variance τ(t)r. With the AMP algorithm, there is an easy way to estimate the value of τ(t)r at each iteration t from the v(t) vector, i.e., τ(t)r≈∥v(t)∥2/m [7]. Below, we explain this approach using arguments similar to those used above.

where we used the Taylor series (22) in the second step and ail∈±1/√m to justify the O(1/√m) scaling. Since the last term in (44) is the scaled average of O(1/√m) terms, with O(1) scaling, the entire term is O(1/√m). We can thus drop it since it will vanish relative to the others in the large-system limit. Doing this and plugging in y=Ax+w yields

recalling the definition of ϵ(t)il from (25). Squaring the result and averaging over i yields

We now examine the components of (46) in the large-system limit. By definition, the first term in (46) converges to τw

. By the law of large numbers, the second term converges to

where m is implicitly a function of n because m/n=O(1). In summary,

We now present numerical experiments that demonstrate the AMP behaviors discussed above. In all experiments, we used a sampling ratio of δ=0.5, {Aij} drawn i.i.d. zero-mean Gaussian with variance 1/m, {xj} drawn i.i.d. from the Bernoulli-Gaussian distribution with sparsity rate β=0.1 (i.e., pX(xj)=(1−β)δ(xj)+βN(xj;0,1) ∀j, where δ(⋅) denotes the Dirac delta distribution), and {wi} drawn i.i.d. zero-mean Gaussian with variance β10−SNRdB/10 and SNRdB=20, so that E[∥Ax∥2]/E[∥w∥2]≈20 dB. We experimented with two denoisers: the MMSE denoiser η(t)(rj)=E[X|rj=X+N(0,τ(t)r)] and the soft-thresholding denoiser η(t)(rj)=sgn(rj)max{0,|rj|−α√τ(t)r} with α=1.14, which is the minimax choice, i.e., the value of α that minimizes the maximum MSE over all 0.1-sparse signals (see [7] for more details). With the soft-thresholding denoiser, AMP solves the LASSO problem “argminx{12∥y−Ax∥2+λ∥x∥1</span