The paper aims to emphasise how switched systems can be analysed with elementary techniques which require only undergraduate-level linear algebra and differential equations. It is also emphasised how math software can become useful for simplifying analytic complications. The time domain voltage balance methodology is used for stability analysis. As for deriving formulas for the asymptotic average of both capacitor voltage and inductor current, a new simple analytic method is introduced. It was shown analytically that the time average of capacitor voltage converges to half of the source voltage. A formula for the time average of the current of the inductor is also computed. As a by-product it was discovered that the period of the current is half of the switching period. Numerical simulations are obtained to illustrate the accuracy of the results. Higher dimensional generalisations could become a bit complicated as stability analysis of higher dimensional exponential matrices are not so easy to handle. On the other hand, the new discovery on the period of the current is more likely to give new insights in handling higher dimensional systems. Analytical formulas are exact and it helps in accurately modelling flying capacitor converts in practice. FCC is well studied in engineering society. However, not much is done in obtaining exact formulas using analysis. Also, math software is much used in computation of numerical results and obtaining simulations. In this paper, one more important aspect of math software is emphasised, namely, use symbolic computations in analysis. 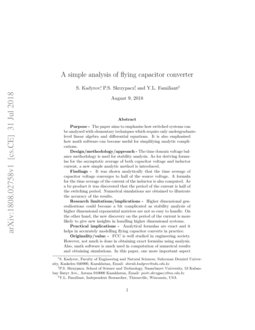 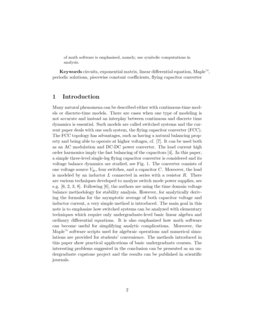 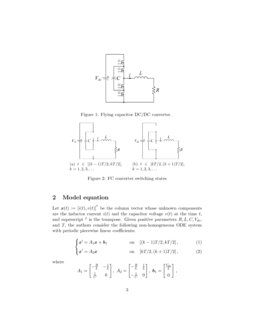 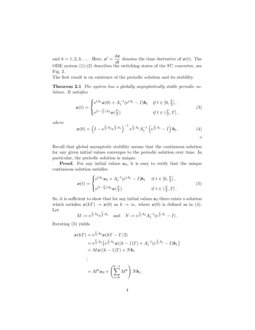 Construction and application of provable positive and exact cubature formulas

We introduce new and simple algorithms for the calculation of the number...
Andreas Björklund, et al. ∙

Andrade rheology in time-domain. Application to Enceladus' dissipation of energy due to forced libration

The main purpose of this work is to present a time-domain implementation...
Yeva Gevorgyan, et al. ∙

Many natural phenomena can be described either with continuous-time models or discrete-time models. There are cases when one type of modeling is not accurate and instead an interplay between continuous and discrete time dynamics is essential. Such models are called switched systems and the current paper deals with one such system, the flying capacitor converter (FCC). The FCC topology has advantages, such as having a natural balancing property and being able to operate at higher voltages, cf. [7]. It can be used both as an AC modulation and DC-DC power converter. The load current high order harmonics imply the fast balancing of the capacitors [4]. In this paper, a simple three-level single-leg flying capacitor converter is considered and its voltage balance dynamics are studied, see Fig. 1. The converter consists of one voltage source Vdc, four switches, and a capacitor C. Moreover, the load is modeled by an inductor L connected in series with a resistor R. There are various techniques developed to analyze switch mode power supplies, see e.g. [6, 2, 3, 8]. Following [6]

, the authors are using the time domain voltage balance methodology for stability analysis. However, for analytically deriving the formulas for the asymptotic average of both capacitor voltage and inductor current, a very simple method is introduced. The main goal in this note is to emphasize how switched systems can be analyzed with elementary techniques which require only undergraduate-level basic linear algebra and ordinary differential equations. It is also emphasized how math software can become useful for simplifying analytic complications. Moreover, the Maple™ software scripts used for algebraic operations and numerical simulations are provided for students’ convenience. The methods introduced in this paper show practical applications of basic undergraduate courses. The interesting problems suggested in the conclusion can be presented as an undergraduate capstone project and the results can be published in scientific journals.

be the column vector whose unknown components are the inductor current

i(t) and the capacitor voltage v(t) at the time t, and superscript ⊺ is the transpose. Given positive parameters R,L,C,Vdc, and T, the authors consider the following non-homogeneous ODE system with periodic piecewise linear coefficients:

and k=1,2,3,… . Here, x′=dxdt denotes the time derivative of x(t). The ODE system (1)-(2) describes the switching states of the FC converter, see Fig. 2. The first result is on existence of the periodic solution and its stability.

The system has a globally asymptotically stable periodic solution. It satisfies

Proof. For any initial values x0, it is easy to verify that the unique continuous solution satisfies

So, it is sufficient to show that for any initial values x0 there exists a solution which satisfies x(kT)→x(0) as k→∞, where x(0) is defined as in (4). Let

If one can show that the matrix M

has all eigenvalues of modulus less than

Then, a,b,c>0 and by Maple symbolic computing

The first average in Theorem 2.2 relies on the fact that the period of i is T/2. Notice that this is rather surprising as all of the coefficients of the ODE system have period T and Floquet theory, see e.g. [5], only guarantees the existence of periodic solutions with period T. The question whether the similar situation appears in the switched systems with more than one capacitor is left for the future work.

Integrating the first row of (2) from T/2 to T and using Proposition 2.3 yields

Multiplying the first and the second rows of (1)-(2) by i and v, respectively, and integrating from 0 to T, results in

Now, integrating only from 0 to T/2 yields

The computer algebra system Maple was employed to conduct the numerical study; see the Maple script in Algorithm 3.

The numerical average values for the current and voltage are in accordance with theoretical results, see Figures 3-5 and Table 1. One can observe that the average of the current deviates from the bound Vdc2R if the period T increases, see Table 1 and Figure 7. Here, equation (7) from Theorem 2.1 is used in order to plot the average ⟨i⟩ vs. period T.

To show the basics of the analysis the authors considered a three-level flying capacitor converter, a simple linear switched system. The periodic switching foreshadows the existence of periodic solutions and this brings two major tasks: a stability analysis of the periodic orbit and a computation of the average value. In this note, the authors used simple methods together with Maple to carry out these tasks.

There are many interesting problems that can be studied with the introduced techniques. The error term in (7) hints that the average inductor current can be larger than Vdc2R. However, the numerical analysis (see Figure 7) suggest that it never exceeds Vdc2R. This needs more investigation in the future. In view of equation (7), another interesting task is to find a formula for the amplitude of the current.

Another general problem is to see how the tools developed in this article can help in analysis of more general multilevel linear switched models. It is especially interesting to find out in which cases the inductor current has frequency twice as large as that of the capacitor voltage.

The authors are indebted to Alexander Ruderman from the Department of Electrical Engineering at the Nazabayev University in Astana for providing the problem and fruitful discussions. Helpful comments by Yakov Familiant from Eaton are gratefully acknowledged.