A Simple Algorithm for Computing the Document Array

We present a simple algorithm for computing the document array given the string collection and its suffix array as input. Our algorithm runs in linear time using constant workspace for large collections of short strings. 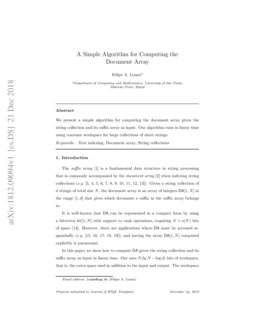 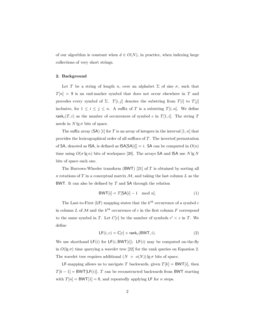 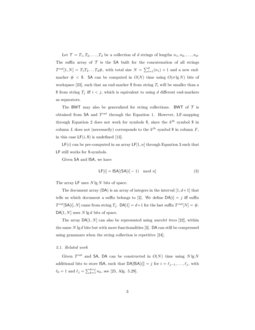 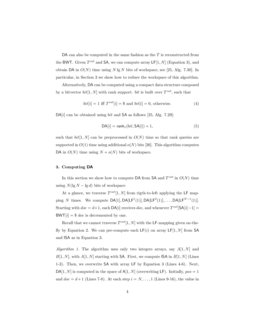 In this paper we present an algorithm to compute the Lyndon array of a s...
Felipe A. Louza, et al. ∙

Computing the original eBWT faster, simpler, and with less memory

A run in a string is a maximal periodic substring. For example, the stri...
Jonas Ellert, et al. ∙

We show that the Longest Common Prefix Array of a text collection of tot...
Nicola Prezza, et al. ∙

We assume the permutation π is given by an n-element array in which the ...
Grzegorz Guśpiel, et al. ∙

The suffix array Manber1993 is a fundamental data structure in string processing that is commonly accompanied by the document array Muthukrishnan2002 when indexing string collections (e.g. ValimakiM07 ; Mantaci2007 ; Makinen2010 ; Bauer2013 ; BelazzouguiNV13 ; KopelowitzKNS14 ; Pantaleoni2014 ; Gog2015b ; LouzaTHC17 ; GagieHKKNPS17 ; SirenGNPD18 ). Given a string collection of d strings of total size N, the document array is an array of integers DA[1,N] in the range [1,d] that gives which document a suffix in the suffix array belongs to.

It is well-known that DA can be represented in a compact form by using a bitvector bit[1,N] with support to rank operations, requiring N+o(N) bits of space Sadakane07 . However, there are applications where DA must be accessed sequentially (e.g. Ohlebusch2010 ; Arnold2011 ; Tustumi2016 ; Louza2018a ; EgidiLMT18 ), and having the array DA[1,N] computed explicitly is paramount.

In this paper we show how to compute DA given the string collection and its suffix array as input in linear time. Our uses N(lgN−logd) bits of workspace, that is, the extra space used in addition to the input and output. The workspace of our algorithm is constant when d∈O(N), in practice, when indexing large collections of very short strings.

Let T be a string of length n, over an alphabet Σ of size σ, such that T[n]=$ is an end-marker symbol that does not occur elsewhere in T and precedes every symbol of Σ. T[i,j] denotes the substring from T[i] to T[j] inclusive, for 1≤i≤j≤n. A suffix of T is a substring T[i,n]. We define rankc(T,i) as the number of occurrences of symbol c in T[1,i]. The string T needs in Nlgσ bits of space.

The suffix array (SA) Manber1993 for T is an array of integers in the interval [1,n] that provides the lexicographical order of all suffixes of T. The inverted permutation of SA, denoted as ISA, is defined as ISA[SA[i]]=i. SA can be computed in O(n) time using O(σlgn) bits of workspace Nong2013 . The arrays SA and ISA use NlgN bits of space each one.

The Burrows-Wheeler transform (BWT) Burrows1994 of T is obtained by sorting all n rotations of T in a conceptual matrix M, and taking the last column L as the BWT. It can also be defined by T and SA through the relation

We use shorthand LF(i) for LF(i,BWT[i]). LF(i) may be computed on-the-fly in O(lgσ) time querying a wavelet tree Grossi2003 for the rank queries on Equation 2. The wavelet tree requires additional (N + o(N))lgσ bits of space.

LF-mapping allows us to navigate T backwards, given T[k]=BWT[i], then T[k−1]=BWT[LF(i)]. T can be reconstructed backwards from BWT starting with T[n]=BWT[1]=$, and repeatedly applying LF for n steps.

Let T=T1,T2,…,Td be a collection of d strings of lengths n1,n2,…,nd. The suffix array of T is the SA built for the concatenation of all strings Tcat[1,N]=T1T2…Td#, with total size N=∑di=1(n1)+1 and a new end-marker #<$. SA can be computed in O(N) time using O(σlgN) bits of workspace Louza2017c , such that an end-marker $ from string Ti will be smaller than a $ from string Tj iff i<j, which is equivalent to using d different end-markers as separators.

LF(i) can be pre-computed in an array LF[1,n] through Equation 3 such that LF still works for $-symbols.

Given SA and ISA, we have

The document array (DA) is an array of integers in the interval [1,d+1] that tells us which document a suffix belongs to Muthukrishnan2002 . We define DA[i]=j iff suffix Tcat[SA[i],N] came from string Tj. DA[1]=d+1 for the last suffix Tcat[N]=#. DA[1,N] uses Nlgd bits of space.

The array DA[1,N] can also be represented using wavelet trees Grossi2003 , within the same Nlgd bits but with more functionalities ValimakiM07 . DA can still be compressed using grammars when the string collection is repetitive NavarroPV11 .

DA can also be computed in the same fashion as the T is reconstructed from the BWT. Given Tcat and SA, we can compute array LF[1,N] (Equation 3), and obtain DA in O(N) time using NlgN bits of workspace, see (Ohlebusch2013, , Alg. 7.30). In particular, in Section 3 we show how to reduce the workspace of this algorithm.

Alternatively, DA can be computed using a compact data structure composed by a bitvector bit[1,N] with rank support. bit is built over Tcat, such that

such that bit[1,N] can be preprocessed in O(N) time so that rank queries are supported in O(1) time using additional o(N) bits Munro1996 . This algorithm computes DA in O(N) time using N+o(N) bits of workspace.

Recall that we cannot traverse Tcat[1,N] with the LF-mapping given on-the-fly by Equation 2. We can pre-compute each LF(i) on array LF[1,N] from SA and ISA as in Equation 3.

The number of steps is N and only four additional variables were needed. Therefore, the algorithm runs in O(N) time. The document array DA[1,N] is stored in NlgN bits using B[1,N], the workspace is N(lgN−lgd) bits, which is constant when d∈O(N).

In practice, the workspace of Algorithm 1 is constant when indexing large collections of short strings, and the array used to store DA[1,N] uses the same space as the array used for ISA[1,N].

We compared our algorithm with the lightweight alternative that uses a bitvector bit[1,N] described in Section 2.1. We evaluated two versions of this procedure, using compressed (bit_sd) and plain bitvectors (bit_plain). We used C++ and SDSL library Gog2014a version 2.0. The algorithms receive as input the concatenated string (Tcat) and its suffix array (SA), which was computed using gSACA-K Louza2017c . Our algorithm was implemented in ANSI C. The source codes are available at https://github.com/felipelouza/gsa-is/.

repetitive collection from a snapshot of Finnish-language Wikipedia. Each document is composed by one page and its revisions111http://jltsiren.kapsi.fi/data/fiwiki.bz2.

the same as pages, except that each revision is a separate document.

repetitive collection of the genomes of influenza viruses222ftp://ftp.ncbi.nih.gov/genomes/INFLUENZA/influenza.fna.gz.

collection of pages from English-language of Wikipedia333http://algo2.iti.kit.edu/gog/projects/ALENEX15/collections/ENWIKIBIG/.

Table 2 shows the running time (in seconds) and workspace (in KB) of each algorithm. The workspace is the peak space used subtracted by the space used for the input, Tcat and SA, and for the output, DA. We used 32-bits integers when N<231, otherwise we use 64-bits to store the arrays of integers. Each symbol of Tcat uses 1 byte.