A short note on the decision tree based neural turing machine 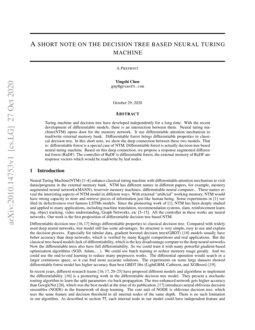 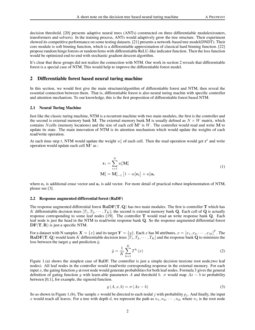 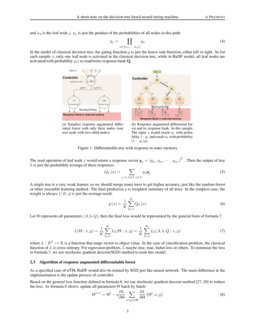 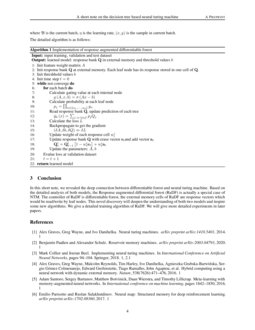 Deep differentiable forest with sparse attention for the tabular data

We present a general architecture of deep differentiable forest and its ...
Yingshi Chen, et al. ∙

[1] verified its defectiveness over famous LSTMs models. Since the pioneering work of [1]

models usually have better accuracy than deep networks, which is verified by many Kaggle competitions and real applications. But the classical tree-based models lack of differentiability, which is the key disadvantage compare to the deep neural networks. Now the differentiable trees also have full differentiability. So we could train it with many powerful gradient-based optimization algorithms (SGD, Adam,…). We could use batch training to reduce memory usage greatly. And we could use the end-to-end learning to reduce many preprocess works. The differential operation would search in a larger continuous space, so it can find more accurate solutions. The experiments on some large datasets showed differentiable forest model has higher accuracy than best GBDT libs (LightGBM, Catboost, and XGBoost)

In recent years, different research teams[16, 17, 20, 21, 22, 23, 24, 25] have proposed different models and algorithms to implement the differentiability.[16] is a pioneering work in the differentiable decision tree model. They present a stochastic routing algorithm to learn the split parameters via back propagation. The tree-enhanced network gets higher accuracy than GoogleNet [26], which was the best model at the time of its publication. [17]

introduces neural oblivious decision ensembles (NODE) in the framework of deep learning. The core unit of NODE is oblivious decision tree, which uses the same feature and decision threshold in all internal nodes of the same depth. There is no such limitation in our algorithm. As described in section

LABEL:sec:algorithm, each internal node in our model could have independent feature and decision threshold. [20] presents adaptive neural trees (ANTs) constructed on three differentiable modules(routers, transformers and solvers). In the training process, ANTs would adaptively grow the tree structure. Their experiment showed its competitive performance on some testing datasets. [21] presents a network-based tree model(DNDT). Their core module is soft binning function, which is a differentiable approximation of classical hard binning function. [22]

Just like the classic turing machine, NTM is a recurrent machine with two main modules, the first is the controller and the second is external memory bank M. The external memory bank M is usually defined as N×W matrix, which contains Ncells (memory locations) and the size of each cell Mi is W. The controller would read and write M to update its state. The main innovation of NTM is its attention mechanism which would update the weights of each read/write operation.

where et is additional erase vector and at is add vector. For more detail of practical robust implementation of NTM, please see [3].

For a dataset with N samples X={x} and its target Y={y}. Each x has M attributes, x=[x1,x2,⋯,xM]T. The RaDF(T,Q) would learn K differentiable decision trees [T1,T2,⋯,TK] and the response bank Q to minimize the loss between the target y and prediction ^y.

Figure 1.(a) shows the simplest case of RaDF. The controller is just a simple decision tree(one root node,two leaf nodes). All leaf nodes in the controller would read/write corresponding response in the external memory. For each input x, the gating function g

at root node would generate probabilities for both leaf nodes. Formula

3 gives the general definition of gating function g with learn-able parameters A and threshold b. σ would map Ax−b

to probability between [0,1], for example, the sigmoid function.

So as shown in Figure 1.(b), The sample x would be directed to each nodal j with probability pj. And finally, the input x would reach all leaves. For a tree with depth d, we represent the path as n1,n2,⋯,nd, where n1 is the root node and nd is the leaf node j. pj is just the product of the probabilities of all nodes in this path:

The read operation of leaf node j would return a response vector qj=(qj1,qj2,⋯,qjF)T . Then the output of tree h is just the probability average of these responses.

A single tree is a very weak learner, so we should merge many trees to get higher accuracy, just like the random forest or other ensemble learning method. The final prediction

y is weighted summary of all trees. In the simplest case, the weight is always 1/K, ^y is just the average result.

Let Θ represents all parameters (A,b,Q), then the final loss would be represented by the general form of formula 7

where L:RF↦R is a function that maps vector to object value. In the case of classification problem, the classical function of L is cross-entropy. For regression problem, L maybe mse, mae, huber loss or others. To minimize the loss in formula 7, we use stochastic gradient descent(SGD) method to train this model.

As a specified case of nTM, RaDF would also be trained by SGD just like neural network. The main difference in the implementation is the update process of controller.

Based on the general loss function defined in formula 8, we use stochastic gradient descent method [27, 28] to reduce the loss. As formula 8 shows, update all parameters Θ batch by batch:

The detailed algorithm is as follows:

In this short note, we revealed the deep connection between differentiable forest and neural turing machine. Based on the detailed analysis of both models, the Response augmented differential forest (RaDF) is actually a special case of NTM. The controller of RaDF is differentiable forest, the external memory cells of RaDF are response vectors which would be read/write by leaf nodes. This novel discovery will deepen the understanding of both two models and inspire some new algorithms. We give a detailed training algorithm of RaDF. We will give more detailed experiments in later papers.